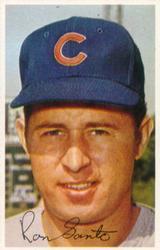 With nearly 35,000 fans on hand on the day set aside to honor him at Wrigley Field, veteran Chicago Cubs third baseman Ron Santo publicly confirmed that he was a diabetic. “I didn’t want anyone else to know about this originally. I’m a diabetic and had a full career in the major leagues and a darned good one,” the 11-year veteran said in a pregame ceremony emceed by Cubs broadcaster Jack Brickhouse. “The reason I’ve done so well is I’ve accepted it and learned to live with it. I feel strongly we’re going to find a cure for this.”1

In his 1993 autobiography, Santo explained that he wanted any donations from Ron Santo Day to go to the Juvenile Diabetes Foundation of Greater Chicago. “I had, by then, given the Cubs’ organization permission to publicly announce for the first time that I had the disease, even though most of my teammates had been aware for several years,” he said.2

Flanked by his parents, sister, wife, and three children, Santo was nearly speechless when he looked at the array of gifts in front of him that included a white mink coat for his wife, Judy, and a new car. “I want to thank God for everything that has happened to me,” he said. “I just can’t say any more. Thank you very much.”3

Santo also received a boat, a snowmobile, an all-terrain vehicle, a German Shorthaired Pointer, a $25,000 check to the Juvenile Diabetes Foundation of Greater Chicago, clothes, a Bible, a typewriter, an adding machine, a color TV, a stereo, a pool table, a golf cart, diabetic candy and ice cream, and a trip to Jamaica and Italy for his family. He also got an engraved shotgun from his teammates. “The spectacle of having so many fans cheering for me and my teammates supporting me was probably too much for me on that day,” he recalled in his autobiography.4

Later that night, teammate Joe Pepitone served as toastmaster at a $50-a-plate fundraiser at the Pick-Congress Hotel in Chicago. The sale of Ron Santo Day buttons also netted an estimated $7,000 for diabetes research.5

The special day capped a tumultuous week that began with an explosive clubhouse meeting five days earlier on August 23 in which manager Leo Durocher alleged that Santo had asked for the day. After vehemently denying Durocher’s claim, Santo called his skipper a liar and had to be restrained from charging the Cubs’ 66-year-old manager. A few minutes later, team vice president John Holland intervened at Santo’s request. When Holland couldn’t remember who brought up the idea of Ron Santo Day, Santo erupted and said Holland had betrayed him.6

After Pepitone and teammate Milt Pappas rebuked Durocher, the latter said, “I quit” and walked upstairs to his office. A majority of the team’s players then indicated that Durocher should stay, and Santo and coach Joey Amalfitano went to the manager’s office. “Let’s try to forget it. We’re both competitive guys,” said Santo after hugging his manager. “We need you. If you leave us now, it’s going to be bad for everyone.”7 Moments later, Durocher put his uniform back on and Santo led the Cubs to a win over the Houston Astros with three hits and three RBIs.

In late July and early August, Santo had endured a 3-for-29 slump and was benched twice.8 Before Ron Santo Day arrived, the Chicago Tribune’s Donna Gill asked fans whether Santo or Durocher should go. “Get rid of Santo. I don’t care for him at all,” Chicago grandmother Inez Davies said in an article that appeared on the morning of Santo’s celebration. “He’s always striking out, or if men are on base in a crucial moment, he blows it. And get rid of Durocher. We need a younger man. There’s too much bickering.”9 Gill concluded, however, that about three-quarters of fans she interviewed supported Santo.

Santo’s legacy and presence in Chicago had been a hot topic throughout the summer. A month earlier, Chicagoan Mary Lettiere explained why Santo should have a day. “Ron Santo deserves a day. Why? He gave his whole baseball career to one team, the Cubs,” she said. “He has given them 11 years of excellence. Our slugger deserves the best.”10

Nina Domenico of Harwood Heights, Illinois, also spoke up for Santo in the Chicago Tribune’s “Sound off, sports fans.” “It’s just out of sight! Imagine a day set aside for Ron Santo!” Domenico wrote. “He really deserves it for all of the good things he has done for the Cubs and how he brightens up the ballpark for the fans. See you August 28, Ron.”11 In another column, a Charleston, Illinois, woman named Irene said, “Let’s fill the park for Ron Santo Day. But you boo birds better stay away. I don’t want to hear one peep from you. I don’t want anyone marring what should be a very beautiful day.”12

Batting fifth in the Cubs’ lineup, Santo had little effect on the outcome of the Atlanta Braves’ 4-3 victory over the Cubs on Ron Santo Day. He went 1-for-3 with a walk in the sixth and a strikeout in the eighth. In the second inning, his single to center advanced Pepitone to third. The next batter, Johnny Callison, doubled to right, scoring Pepitone and Santo, to give the Cubs a 2-1 lead. In the field, he had one putout and one assist.

The Braves regained the lead with two runs in the sixth inning off Cubs starter Fergie Jenkins. After Felix Millan grounded out, Ralph Garr tripled to left. Jenkins fanned Aaron, but the next hitter, Earl Williams, homered. The Cubs tied the score at 3-3 in the eighth when Brock Davis singled and drove in Pepitone, who had tripled to lead off the inning.

The Braves forged ahead for good in the ninth. Williams singled to right and was forced at second on Mike Lum’s sacrifice attempt, leaving Lum at first. The next batter, Darrell Evans, struck out. Sonny Jackson advanced Lum to second with an infield single. The next hitter, Marty Perez, stroked a single that landed in front of left fielder Billy Williams and scored Lum.14

The Cubs’ comeback attempt ended quickly in the ninth when Glenn Beckert hit into a double play after Don Kessinger singled. The next batter, Billy Williams, singled to right, but Pepitone flied out to center for the third and final out.

Both Jenkins and Braves starter Phil Niekro threw complete games. Niekro scattered 11 hits, struck out six, and walked two to improve his record to 13-11. Making his second attempt at his 21st victory of the season, Jenkins gave up nine hits, fanned six, and walked one batter. Jenkins went on to lead National League pitchers in victories (24), innings pitched (325), games started (39), and complete games (30), and received the NL Cy Young Award. He was elected to the Hall of Fame in 1991, six years before Niekro received the same honor.

Postgame coverage of Ron Santo Day echoed the pregame debate. “The only familiar thing missing on Ron Santo Day was the usual horde of hecklers who persist on raining boos at the All-Star third baseman,” John Smith, a sports editor from Belvidere, Illinois, observed. “Had they tried to appear, there would have been more than tears rolling in the ‘friendly confines.’”15

In addition to the sources cited in the Notes, the author used Baseball-Reference.com, Newspapers.com, Retrosheet.org, and the 1971 and 1972 Chicago Cubs Official Roster Books.

4 Santo with Minkoff, Ron Santo: For Love of Ivy.