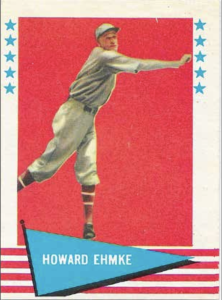 Time was running out for the Detroit Tigers to keep the Chicago White Sox from running away with the 1919 pennant. Ten years after manager Hughie Jennings took his Tigers to their last World Series, their third straight appearance and third straight loss in the fall classic, he knew his team had a narrow margin for error if they wanted to return.1 The Tigers did their best, winning 15 of their first 19 games in August, getting as close as four games behind Chicago in the standings. But the torrid White Sox were just as steady, putting together a 10-game winning streak during the Tigers’ tear.

By the time the Tigers (65-47) arrived in St. Louis to close out the month, they had lost four straight and seen the White Sox lead widen to eight games. They had to stop the bleeding in a four-game weekend series with the Browns (59-53) before returning to Detroit to face the league leaders in a Monday doubleheader.

The Tigers won their series opener with Jimmy Burke’s Browns, then dropped the first game of a Saturday doubleheader, shut out by Allen Sothoron in a 4-0 loss.

The Tigers had a rare early chance in the top of the second, when Harry Heilmann walked and Chick Shorten bunted and beat Davenport’s throw. But the threat vanished instantly with the next batter, Bob Jones, who hit into a double play, and Eddie Ainsmith sent a harmless groundball to Sisler at first to end the inning. The Tigers offense then went back into hibernation.

Josh Billings kept the Browns alive in the second inning with a two-out single, before Ehmke hit Davenport to put two runners on. That turned the lineup over to Austin, who hit a double to the right-field wall. Austin tried his luck after a faulty throw from Shorten but was thrown out at home plate. But Billings and Davenport had scored to make it 3-0.

St. Louis kept sizzling in the third on a two-run home run by Sisler after Jacobson’s leadoff single and Gedeon’s infield popup. Jack Tobin came “within an inch,” the Detroit Free Press said, of matching Sisler’s result, but Shorten retired him “on the edge of the sun gods’ section.”2 Ray Demmitt became the third straight batter to send a fly ball in Shorten’s direction, but it was the easiest to handle. That ended the inning, but the Browns were on top 5-0.

The fifth inning all but assured fans that the home team would win for the second time that day, and likely even more decisively. Austin and Gedeon led off with back-to-back walks for the second time. Jacobson tried to bunt them over but popped up to Ehmke. Sisler singled to right to score Austin, and Gedeon came home on a squeeze bunt by Tobin. The Browns led 7-0, and the game appeared to be out of reach.

While the Browns’ bats battered Ehmke, Davenport “boomed along like a stake horse,” the Free Press reported.3 After Cobb’s harmless first-inning single, the Tigers went six more innings without a hit from anyone other than Ehmke, who mustered two. As they entered the eighth, they had played 16 innings that long day without scoring a run.

“For seven innings of the second game, Dave Davenport held the Tigers about as Sothoron had in the first,” the Free Press wrote. “No matter what the Bengals did the lean flinger of the Browns checked them and it looked like curtains for the second time with the enemy rolling along on a seven-run lead and no prospects of anything to relieve the situation.”4

If anyone were to ignite an improbably rally, it would have to be Ehmke, who was having more success at the plate than on the mound. He answered the call by leading off the eighth inning with a double to left field. Donie Bush followed with a single, and Ralph Young was safe at first on a fielder’s choice that retired Bush but scored Ehmke. The Tigers had, at long last, changed their number on the scoreboard.

Then, in an unexpected outburst, they kept right on going. Cobb came up after Young and clobbered a ball over the fence for a two-run homer to make the score a more respectable 7-3. Davenport had utterly stymied the Tigers for seven innings, but now, the Free Press commented, “Everything he threw up the Tigers hit.”5 Veach and Heilmann followed Cobb with singles, and the starting pitcher, “clearly upset, wild-pitched the pair” to second and third, the Free Press reported. With Shorten in the batter’s box and the tying run now, incredibly, on deck, Burke yanked his starter in favor of Ernie Koob.

Jennings responded by replacing Shorten with the right-handed Ira Flagstead to face the lefty reliever. Koob immediately made matters worse by plunking Flagstead to load the bases. Ben Dyer’s groundball scored Veach but retired Heilmann on a force out at third. Ainsmith grounded back to the mound to end the inning. But the Tigers were within reach, with the score 7-4.

Ehmke completed the bottom of the inning and was due up once again to lead off the ninth. Jennings gave his starter a chance to tally his fourth hit of the game, and Ehmke did just that, nabbing an infield single before being lifted for pinch-runner Babe Ellison. After Bush flied out to center, Young’s single to left put runners on first and second for Ty Cobb. The league batting leader smacked a double to score Ellison. It was 7-5 with two runners in scoring position. Bobby Veach brought them both home on a single to right field, and scampered to second on the futile throw to home plate.

“This attack of the Tigers, in view of the way they had behaved prior to the eighth, struck the fans dumb and must have had a disheartening effect on the Browns,” the Free Press wrote.6

Having trailed by seven runs with only the faintest of pulses, the Tigers had rallied to tie the game. Desperate and dumbfounded, Burke made another call to the bullpen and brought in Bert Gallia.

“Heilmann’s greeting to Bert was a smash to center,” the Free Press reported.7 Veach reached the dish and the Tigers took an 8-7 lead.

Flagstead kept the pressure on with a single, but Dyer struck out, and after Ainsmith reached first on an infield hit, Heilmann was out on the basepaths on the play and the inning was finally over. After nothing but goose eggs all day, the Tigers had scored four runs in consecutive innings. The stunned Browns now faced a do-or-die bottom of the ninth.

With Ehmke benched for the pinch-runner, Jennings called on Slim Love, and the new hurler slammed the door, striking out pinch-hitter Herman Bronkie, inducing a grounder to short from Austin, and getting Gedeon on strikes for the final out.

“That’s the story of how the Browns let a seven-run lead slip away from them,” wrote the St. Louis Post-Dispatch. “This contest was one of the toughest the Burkemen have lost this season.”8

The Tigers, snatching victory from not just the jaws but the tonsils and windpipe of defeat, had earned a comeback win and a doubleheader split.

“There didn’t appear to be a chance in the world for the Tigers, under the conditions, to save even a vestige of the afternoon,” the Free Press wrote. “Only the most vicious attack that a Bengal club ever has administered a collection of rival pitchers averted a double beating at the hands of the Browns.”9

In addition to the sources cited in the Notes, the author consulted Retrosheet.org and Baseball-Reference.com in writing this article.

1 Jennings’ 1919 season would be his 13th and last with the Tigers. His 1,131 wins as Detroit skipper stood until Sparky Anderson eclipsed the mark in 1992.