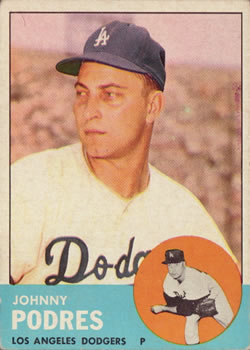 During the sophomore season of the Houston Colt .45s in 1963, there were a few bright spots for the Colt Stadium community suffering humidity, mosquitoes, and a ninth-place baseball team. Left fielder Al Spangler hit .281; right-hander Don Nottebart threw a no-hitter; rookie outfielder Rusty Staub showed flashes of promise; and Johnny Temple offered solace, however scant, to Houstonians when he played the role of spoiler against Johnny Podres on August 4.

Already an icon, at least in Brooklyn, for winning the seventh game of the 1955 World Series, the 30-year-old Podres inched toward membership in another rarefied group on a Sunday night in Houston. Handling the Colt .45s lineup with the aplomb of Bob Fosse choreographing a Broadway musical, the fun-loving southpaw took a no-hitter into the ninth inning. But Temple’s leadoff single ended Podres’ quest to throw the third no-hitter for the Dodgers — and first by someone other than Sandy Koufax — since they moved to Los Angeles before the 1958 season.1

Podres’ 4-0 shutout at Colt Stadium was the second Dodgers victory in a four-game streak, one of several triumphant sequences during the team’s march to the NL pennant and four-game sweep of the New York Yankees in the World Series. It was not an overpowering performance — he struck out three Houston ballplayers over eight innings before leaving the game with no outs in the bottom of the ninth. First baseman Ron Fairly contributed 11 putouts in keeping the Colt .45s on edge.

The fourth inning was the most troublesome for the left-handed hurler. After retiring Bob Aspromonte and Carl Warwick on grounders, Podres walked rookies Jimmy Wynn and John Bateman. The Associated Press noted “control difficulties” in its discussion of the rally, followed by: “Rookie Rusty Staub then rapped a hard grounder toward second base. Marv] Breeding, acquired from Washington Tuesday, went deep in the hole, speared the bouncer and pegged out Staub by a step.”2

Ken Johnson, Podres’ right-handed counterpart, kept zeroes on the Dodgers’ half of the scoreboard through five innings. In the top of the sixth, Jim Gilliam singled with one out and headed to second on Wally Moon’s grounder to second. Tommy Davis, the 1962 and 1963 major-league leader in batting average, broke the scoreless tie with a single. Dodgers catcher Bateman stifled the inning by throwing out Davis on a steal attempt. Dubbed “the best throwing catcher in the league” by the St. Louis Cardinals, Bateman had turned 21 years old a couple of weeks before the game.3

The Dodgers scored the rest of their runs in the next inning. It began with promise for Houston because Johnson got two outs quickly: Ron Fairly flied to Wynn in left field and Frank Howard grounded to Aspromonte at third base. But Johnny Roseboro got his second single of the game and Breeding walked, bringing up Podres. The .141-hitting pitcher slammed one of his two doubles that season, a shot toward the left-field fence; Roseboro and Breeding scored. Maury Wills kept Wynn busy in left field with another base hit, scoring Podres, for a 4-0 advantage.

Houston skipper Harry Craft brought in veteran righty Don McMahon. Wills, to nobody’s surprise, stole second. From 1960 to 1965, he led the National League in stolen bases six times and the major leagues twice, including a major-league record of 104 steals in 1962. Gilliam’s grounder to second ended the plunder.

McMahon suppressed the Dodgers in the eighth, giving up a walk to Fairly and no hits, and Jim Dickson replaced him in the ninth. Roseboro led off with a bunt single, advanced to second on Breeding’s sacrifice and to third on a stolen base. Houston’s hearts lightened when Dickson whiffed Podres and Wills lined out to shortstop Bob Lillis.

It seemed possible, even likely, that the left-hander would join the list of no-hitters as Temple led off for Houston in the bottom of the ninth. Koufax had thrown a “no-no” against the San Francisco Giants earlier in the season. In addition, Colt .45s righty Don Nottebart hurled one against the Phillies in May. Juan Marichal of the Giants accomplished the feat in a 1-0 June contest against Houston.

But Temple’s liner on Podres’ second pitch of the at-bat severed Podres’ chance at joining this trio and a list also including Dodgers Ed Head, Tex Carleton, Dazzy Vance, Rex Barney, and Carl Erskine. When the southpaw hit the next batter, Aspromonte, Dodgers manager Walter Alston turned to Larry Sherry. The right-handed reliever secured the win by retiring the next three batters, Warwick, Wynn, and Bateman.

Though the 1963 Colt .45s didn’t have any batters ending the season with averages higher than Spangler’s .281, the 33-year-old Temple went over .300 in May. National League pitchers got pounded by the veteran, who had a 14-for-33 output over an eight-game stretch.4 But the base hit on the night of August 4 had more import, perhaps, because it gave Colt .45s fans a slice of pride in preventing a complete blanking.

There had been a slight doubt whether Temple was going to play baseball in 1963. During the previous season, he told the Houston Chronicle: “I love this game, but it’s a grind for me now. I’ve slowed up just as much as any guy my age would. … [H]owever, I’m still faster than most of the players around today.”5 But Temple may have just been blowing off steam rather than making a declaration. His biographer, William A. Cook, noted that the Chronicle also mentioned Temple putting the odds of donning a uniform for 1963 at 90-10.6

What often hovered over the second baseman was not his résumé — including four All-Star Games — but his temper. There were three arguments with umpires resulting in fines by July.7 Plus, mentioning Temple’s hotheadedness without Earl Lawson was like eating peanut butter without jelly. In 1957, during his first tenure with the Reds, Temple assaulted the sportswriter and scorer after a 3-2 loss to the Pirates on June 21; Lawson had recorded that Temple made an error, which allowed Hank Foiles to get on base. A $100 fine and an apology resulted.8 Temple and Reds coach Reggie Otero got in a clubhouse fight in 1964, leading to Temple’s exit from Cincinnati after playing in six games for his old ballclub. It was also the end of his playing career.

After losing his no-hitter, Podres explained his strategy against the fiery infielder: “He was crowding the plate so I came next with a curve inside. I wanted him to pull it down to Maury (Wills). But he’s smart and he went with it to the opposite field just like he was trying to do. I don’t think Marv (Breeding) missed it by more than five inches.”9

He also revealed that his energy level had fallen. “I was plenty pooped in the ninth,” said the lefty. “I had to run the bases in the seventh (when he hit a two-run double), and needed oxygen after I came back to the bench.”10

In addition to Podres’ exemplary display on the mound, the Dodgers celebrated Roseboro’s outstanding 3-for-5 hitting performance. Gilliam, too, was impressive with a 2-for-4 output.

1 Koufax ultimately threw the first four no-hitters for the Los Angeles Dodgers. Bill Singer’s July 1970 no-hitter against the Philadelphia Phillies was the first by a Los Angeles pitcher besides Koufax.