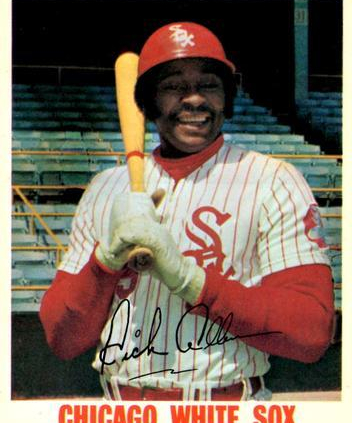 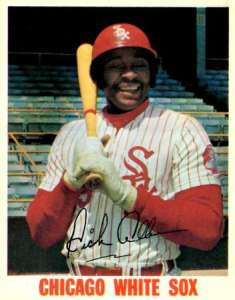 In 1972 Dick Allen won the American League’s Most Valuable Player Award, and was named The Sporting News AL Player of the Year. Those tributes were tangible proof of Allen’s impact on the Chicago White Sox. After four straight losing seasons—including a franchise-record 106 losses in 1970—Chicago finished 87-67, and second in the AL West Division.

On August 4 at White Sox Park the skills behind Allen’s individual honors—and Chicago’s team resurgence—were on display. He reached base four times in five plate appearances, scored the tying run, and drove in the winning run, leading the White Sox past the Texas Rangers, 3-2.

Chicago had acquired Allen from the Los Angeles Dodgers during the Winter Meetings in Phoenix on December 2, 1971, to play first base. The deal resulted from a three-team negotiation, and the Dodgers parted with Allen only after obtaining Frank Robinson from the Baltimore Orioles one day earlier.1 Once Robinson was in the fold, Los Angeles sent Allen to Chicago in return for left-handed starter Tommy John—13-16 for the White Sox in 1971—and Steve Huntz, a switch-hitting utility infielder. Chicago inherited Allen’s $100,000 salary, instantly making Allen, who turned 30 before the season began, the highest-paid player in White Sox history.2

Allen spent the first seven years of his major-league career with the Philadelphia Phillies, and he frequently occupied the National League’s offensive leaderboards. He spent 1970 with the St. Louis Cardinals before his 1971 stint in Los Angeles. Jerome Holtzman, writing for The Sporting News, gave tepid endorsement of the Allen trade, cautioning Chicago’s fans that Allen “certainly has been controversial, and more than several times has been fined and disciplined for missing games and arriving late at the ballpark.”3

White Sox manager Chuck Tanner—he had known Allen and his family since Allen’s childhood—was unconcerned with Allen’s reputation. Tanner focused instead on the speed and power Allen added to the lineup, and observed that Allen always gave 100 percent on the field.4

It was Tanner’s optimism, not Holtzman’s pessimism, that came to fruition. When the Texas Rangers—relocated from Washington before the season—arrived in Chicago for four games in three days beginning August 4, Allen was Chicago’s leading hitter (.308) and topped the AL in home runs (27) and runs batted in (77). Allen’s play had boosted the White Sox to second place in the AL West at 55-43, trailing only the reigning division champion Oakland A’s.

Allen’s power was even more important than anticipated because third baseman Bill Melton, the defending AL home-run champion, had not played since June because of a back ailment. Melton appeared in only 57 games during the season, and his home-run output dropped from 33 in 1971 to 7 in 1972.

Texas (40-59) was saddled with the worst record in the AL, and occupied sixth place in the West Division. Manager Ted Williams selected 21-year-old rookie Don Stanhouse (1-2) to start the Friday-night game, hoping Stanhouse, a right-hander, would pitch as well as he had in his last outing—a win over Oakland—in which he allowed just six hits and two runs in eight innings.

Tanner sent Stan Bahnsen (13-11) to the mound. Bahnsen had joined Chicago less than three hours after Allen in December 1971, in a trade with the New York Yankees for infielder Rich McKinney. Bahnsen’s most recent start resulted in a complete-game six-hit win over the Minnesota Twins.

From the outset, Bahnsen appeared to be sharp; he did not allow a hit in the first four innings, striking out five, and issuing two walks. The White Sox grabbed the lead in the third; Jay Johnstone—entering the game without a home run, and hitting .178—sent a breaking ball from Stanhouse into the upper deck in right-center field to put Chicago ahead, 1-0.

In the fifth inning Texas surged ahead, only to see the White Sox tie the game in their half of the frame. Catcher Bill Fahey started things with the Rangers’ first hit, a single to center, and he raced to third on a single by Elliott Maddox. Rookie second baseman Vic Harris—hitless in 39 major-league plate appearances—slapped his first major-league hit, and the Rangers third consecutive single, to score Fahey and send Maddox to third.

With runners at the corners, Bahnsen threw a wild pitch; Maddox dashed home, and Harris sprinted from first to third. Two runs were on the scoreboard, and with no outs and a runner at third, it looked as though Bahnsen was unraveling. Instead, he got the next two batters to tap the ball right back to the mound.

Bahnsen held Harris at third while throwing out Stanhouse, and then threw Harris out at home after fielding Dave Nelson’s grounder. Nelson reached second on the play, and remained there when Toby Harrah flied out. Bahnsen had settled down in time to record three straight outs, but Texas held the lead, 2-1.

The White Sox quickly tied the game. With one out, Allen received his second walk. It was Stanhouse’s fifth free pass; the first four did not hurt him, but this one did. Carlos May stepped into the batter’s box, and Tanner signaled a hit-and-run. It was executed to perfection; May scorched a double that landed just inside the right-field line, and Allen hurried home with the tying run.

After his wobbly fifth, Bahnsen experienced few problems. Ted Ford singled in the sixth, but was erased in a double play. In the ninth, Ford and Fahey collected their second singles of the evening, but no one advanced beyond second base.

Two Texas pitchers had combined to match Bahnsen’s efforts, so the score remained 2-2 entering the bottom of the ninth. Stanhouse blanked the White Sox in the sixth, and Paul Lindblad kept Chicago scoreless in the seventh and eighth, yielding one hit in each inning.

Bahnsen was scheduled to lead off the ninth against Lindblad, but Buddy Bradford pinch-hit and punched a single into left field. Pat Kelly bunted, and he and Bradford were safe when Bradford beat Lindblad’s throw to second.

Tanner asked Johnstone to sacrifice, but Johnstone fouled off two attempts. With the count 0-and-2, Tanner inserted right-handed Rick Reichardt to swing away against the left-handed Lindblad.

Williams countered with right-hander Horacio Piña, who was making his 41st relief appearance of the season; he carried a 2-4 record with a 2.28 ERA and 13 saves. Piña snuck a third-strike pitch past an incredulous Reichardt for the first out,5 bringing Allen to the plate.

Piña’s first pitch was out of the strike zone; his second pitch—a fastball—was crushed by Allen’s powerful right-handed swing. The ball sailed toward right-center field, and over Ford’s head for a double. Bradford cruised home for a 3-2 win. In twenty-first-century baseball parlance, it was a walk-off win for Chicago.

The White Sox had won in the ninth inning for the 10th time in 1972, and the victory brought Chicago’s record in one-run games to 28-13.6 Harold McKinney of the Fort Worth Star-Telegram lamented the Rangers’ misfortune, writing, “Good teams win one-run games; bad teams lose them.”7

Lindblad was the losing pitcher, falling to 4-5. He finished the campaign at 5-8, pitching in a major-league-leading 66 games, all in relief. The Rangers were the only major-league team to lose 100 or more games in 1972, completing the schedule at 54-100.

Bahnsen held the Rangers to six hits, struck out seven, and issued two walks, although he did not walk anyone after the third inning. Bahnsen raised his record to 14-11, on his way to a final 21-16 mark—the only 20-win season of his 16-year career.

Tanner was honored in October as AL Manager of the Year for keeping Chicago within striking distance of World Series champion Oakland the entire season. Richard Dozer of the Chicago Tribune cited Tanner’s handling of Allen as a major factor in his securing the award.8

In addition to the sources cited in the Notes, the author consulted Baseball-Reference.com and Retrosheet.org for pertinent information, including the box score. The author also relied on game coverage in the Chicago Tribune and Fort Worth Star-Telegram, and SABR BioProject biographies for several players involved in the game.

5 The strikeout was credited to Johnstone.