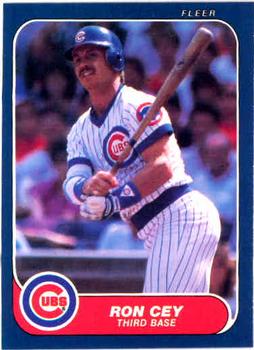 The Chicago Cubs overcame two ejections and the first-place New York Mets in the opener of a five-game series at Wrigley Field on August 4, 1986. Dennis Eckersley earned his second win over the Mets in six days and Ron Cey drove in two key runs, leading the Cubs to a 4-2 victory.

After surging to the All-Star break with a phenomenal 59-25 record, the Mets arrived in Chicago leading second-place Philadelphia by 17½ games in the NL East. The Cubs were stumbling along in fifth place, 25½ games back, with a record of 44-58.

A sensation with the Cleveland Indians and Boston Red Sox and a key member of the Cubs team that broke a 39-year postseason drought in 1984, Eckersley was struggling with shoulder tendinitis and alcohol dependence in August 1986. At age 31, he was still a season away from the trade to the Oakland A’s and a move to the bullpen that would rejuvenate his career and propel him to the Hall of Fame. But the 12-year veteran still had his moments as a starter, including holding the Mets to one run in five innings in Chicago’s 4-3 win at Shea Stadium on July 30.

In this rematch, Eckersley retired the first five Mets he faced. including two by strikeout, before Kevin Mitchell doubled with two outs in the second. After Howard Johnson was intentionally walked — which turned out to be Eckersley’s only walk of the day — Rafael Santana stroked a 1-and-2 pitch to center to give the Mets a 1-0 lead.

Mets starter Ron Darling almost added to the lead but a leaping Leon Durham snagged his line drive down the first-base line for the third out of the inning. “That’s the hardest ball I ever hit,” said Darling. “That was probably the play of the game.”1

The Cubs tied the game in the bottom of the second when Durham singled to center, moved to second on a walk to Jody Davis, and scored on Cey’s single to center.

After Darling struck out the side in the third, Keith Moreland led off the bottom of the fourth with a single to center. He advanced to second on Davis’s single and attempted to score when Cey singled to right.

Danny Heep, playing for Darryl Strawberry, who was out with a bruised thumb,2 fired home. His throw took Mets catcher Gary Carter slightly up the third-base line. Carter swiped backward at Moreland, who was already past him and beginning his slide.

Home-plate umpire Scott Grinder called Moreland out, ruling that Carter had tagged him on the shoulder. Moreland jumped up, nearly bumping Grinder as he got in the umpire’s face. He disputed the call emphatically and was quickly ejected.

“I don’t snap too often, but I was safe,” Moreland said afterward. “He never tagged me. If he had tagged me, I would never have argued. But he never tagged me.”3 Carter admitted, “I don’t think I tagged him.”4 The bleacher fans showed their displeasure by throwing debris on the outfield, resulting in a 15-minute delay.5

An inning later, the Cubs took the lead. Eckersley led off the fifth by drawing a four-pitch walk from Darling. He advanced to third on a one-out double to the left-field corner by Ryne Sandberg and scored on a groundout by Jerry Mumphrey. Terry Francona, who had replaced Moreland in right field, doubled to right to bring Sandberg home and increase the Cubs’ lead to 3-1.

Eckersley had retired 10 straight Mets entering the sixth inning, but Lenny Dykstra led off with a grounder to third and was called safe by first-base umpire Dave Pallone, who ruled that Durham had pulled his foot off the bag too soon. “It was too blatant for me not to call it,” Pallone said afterward.6

Cubs manager Gene Michael rushed from the dugout and confronted Pallone, getting in his face. During the argument, Michael reached out, grabbed Pallone’s hat, turned it around, and placed it back on the umpire’s head, earning an ejection.

“I had taken my cap off, then the bill of his cap was going to hit me in the forehead,” Michael said afterward. “So I just turned it around for him so he wouldn’t do that. I didn’t want him to get in trouble by beaking me with his hat.”7 Pallone saw it differently. “It was the bushest thing I have ever seen,” he said. “He touched me; there was physical bumping. There were times I tried to get away and he kept following me. It will go to the league office that way.”8 Michael was later suspended.

After the delay for the argument and ejection, Eckersley remained poised, easily retiring the next three batters.

Cey pushed the Cubs’ lead to 4-1 in the sixth with a long solo homer that cleared the left-field bleachers and struck the front of a building on Waveland Avenue.9 The home run — Cey’s third hit of the game — brought the veteran third baseman’s season totals against the Mets to 10 hits in 21 at-bats, with a double, three homers, and eight RBIs in seven games.

After two quick outs in the seventh, the Mets got to Eckersley again. Johnson and pinch-hitter Mookie Wilson connected for back-to-back doubles to make the score 4-2. But George Foster, who was released by the Mets three days later, pinch-hit for Darling and struck out to end the threat.

Darling finished the game with seven strikeouts but allowed four earned runs on nine hits and two walks in six innings. He had won three of his last four starts, compiling a 1.09 ERA and pitching two complete-game shutouts. “I’d been on a streak,” Darling said. “I guess I had one of these coming.”10

Lee Smith pitched the final two frames in relief for the Cubs and retired six of the seven Mets he faced, allowing only a two-out single in the ninth to Mitchell. The save was Smith’s 20th of the season, allowing him to tie Bruce Sutter’s team record of four consecutive seasons with 20 or more saves. It was also his 133rd career save with the Cubs, tying another one of Sutter’s team records. “I never have been much on records or stuff like that, but when you are in there, it’s nice,” Smith said. “To be classified in the category of a Bruce Sutter or a Goose Gossage, that makes you feel good.”11

Eckersley finished with six strikeouts and allowed just four hits in seven innings, while holding the first five hitters in the Mets lineup hitless in 20 at-bats. The win ran his career record to 3-0 against the Mets and evened his season record at 6-6, but he would not win again in 1986, finishing the year at 6-11. But his two wins in six days against a powerful New York lineup echoed his earlier glory days — and foreshadowed his remarkable career resurgence as a closer with the A’s.

The author quickly became a Cubs fan once his home received WGN on cable TV in August 1983. Accompanied by his parents and sister, he made his first trip to Wrigley Field for this game and the next day’s game, shortly before he began his freshman year at the University of Arkansas.

Before the game began, he wandered up toward the press box entrance and handed a note to a gentleman who was entering. Later that afternoon, family and friends back home heard Harry Caray announce, “The McEntire family from Marshall, Arkansas, is at the game today.”