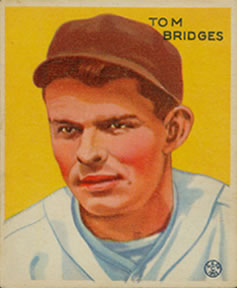 On August 5, 1932, Tigers pitcher Tommy Bridges sent the Navin Field crowd of 7,500 home with a terrific tale to tell their friends, colleagues, and families throughout subsequent decades. They almost saw a perfect game.

Bridges got close to breathing the rarefied air previously enjoyed by Lee Richmond, John Montgomery Ward, Cy Young, Addie Joss, and Charlie Robertson. But Dave Harris broke the path to perfection with a pinch-hit single after 8⅔ innings. Bridges needed only one run for the victory against the Washington Senators; Detroiters racked up 13 tallies with every starting player scoring at least once. Only one starter did not get a hit – third baseman Billy Rhiel.

Detroit businessmen in attendance could attribute the game to being a long lunch break – it took nearly two hours for Bridges and his chums to finish their domination.

Senators southpaw Lloyd Brown tamed the Tigers for the first three innings. That paradigm changed in the bottom of the fourth when Detroit’s offense pounded the Senators with the regularity of the Ford Motor Company’s assembly line in nearby Dearborn manufacturing the latest Model B cars.

It began with four consecutive singles.

Detroit’s John Stone, a prodigious batsman hitting .309 entering the game, stepped into the batter’s box after back-to-back singles by Harry Davis and Charlie Gehringer placed runners at the corners. Stone got the third consecutive single, scoring the former and moving the latter to second base. Earl Webb’s base hit sent Gehringer across home plate for the Tigers’ second run; Stone advanced to second base.

It got worse for the Washington nine.

Brown’s wild pitch pushed the runners ahead by one base. Then the lefty struck out Gee Walker, a .294 career hitter. Walker’s .323 average in 1932 was the third-highest in his 15-year career. But whiffing this prodigious batter proved to be a temporary reprieve.

To set up a double play, Brown gave an intentional pass to Rhiel. Murphy’s Law manifested itself – Heinie Schuble’s single gained him two RBIs as Stone and Webb made the score 4-0.

Rhiel and Schuble occupied first and third with no indication of peril decreasing; Senators skipper Walter Johnson, in his fourth season at the Washington helm after his storied pitching career, hoped to bandage the wounds with reliever Bobby Burke. Instead, more hemorrhaging occurred.

Schuble got into scoring position with a stolen base and Ray Hayworth’s walk loaded the bases. Bridges increased the padding to six runs with a single scoring Rhiel and Schuble. Detroit had batted around the order; Hayworth stood on second base as the lone runner. Burke retired Davis for the second out, another short-lived break.

Gehringer tagged the Senators lefty for an RBI single and Detroit’s seventh run. With runners on first and second, Stone drew a walk. It seemed that the agony would continue with the bases loaded and Earl Webb coming to the plate for the second time in the inning. A part-time player with 88 games in the season, he finished ’32 with a .287 average.

Webb made the third out, liberating the Washington club.

In the bottom of the sixth, Gehringer doubled home Davis, who had drawn a walk, for the Tigers’ eighth run. The score escalated to 9-0 an inning later when Walker singled, stole second base, and scored on Schuble’s single.

In the top of the eighth, Tigers manager Bucky Harris made a defensive replacement at third base. Nolen Richardson took over the hot corner from Rhiel.

Momentum swelled like a snowball becoming an avalanche in Detroit’s half of the eighth.

Bridges led off with a single; Burke retired Davis, then gave up a single to Gehringer. Stone doubled home the baserunners and Webb’s double afforded him the same courtesy, making the score 12-0.

Gehringer’s sixth-inning double and these two consecutive two-baggers were the only extra-base hits in the game for Detroit.

With two outs in the top of the ninth, Johnson selected Harris to pinch-hit for Burke. Harris was a logical choice given his recent batsmanship – 106 games and a .296 average in 1930; 77 games and a .312 average in 1931. Fans of both teams would show Bridges respect no matter what happened. But a perfect game is a feat that they likely wouldn’t see again, at least not in person. They wouldn’t see it on this August afternoon either.

Harris (who finished the ’32 season with a .327 average across 81 games) ruined the perfection with his base hit. Sam Rice’s groundout to first baseman Davis with Bridges covering the bag ended the game.

In his Detroit Free Press column “Druke Says,” M.F. Drukenbrod credited Bridges and Harris with being heroes of the afternoon. The scribe set Harris apart from the ballplaying brethren who might have felt guilt or anxiety in standing between a pitcher and immortality. “Heroes must have courage, and Harris showed he has it,” wrote Drukenbrod. “It takes courage to deliver a hit in a situation like that. A faint-hearted person never would have dared to do it. He would have feared the booes [sic] of the crowd and the jibes of the other players.”1

The Associated Press noted that the Tigers infield was not challenged on defense because “the batters generally hit directly to them.” In the outfield, “only one was a hard chance to the fielder.”2

Detroit’s excellence on the mound and at the plate is even more impressive considering that the Senators had a 58-46 record coming into the game. In the preceding two weeks, they were 9-5.

The Tigers sported a 52-48 won-lost account but shouldered a 4-10 record during the same two-week span.

Bridges faced a tough lineup that boasted batters among the AL’s best. Joe Cronin and Buddy Myer had the league’s numbers 1 and 2 slots for triples in 1932. Heinie Manush was number 5, in addition to being number 6 in slugging percentage; number 4 in batting average; number 7 in doubles; and number 1 in singles. Manush and Cronin tied at number 6 for RBIs.

It was one of four no-hitters for Bridges broken in the ninth inning during the 1932-1933 period and a highly significant game for the Motor City men. Bridges struck out seven in his quest for perfection while the offensive standouts set their own standards of excellence: Gehringer (4-for-5, two RBIs, two runs scored) and Stone (2-for-4, three RBIs, two runs scored), and Schuble (2-for-5, three RBIs, one run scored).

The 1932 Tigers showed signs of superiority, standing 13 games above .500 in early July. But that cushion lessened over the next month. By the time they took the field on August 5, their record was 52-48. The Tigers ended August two games above .500 and rested directly on that benchmark with a 76-76-1 record to end the season.

Bridges spent his entire major-league career with Detroit: 1930-1943 and 1945-1946. (He was in military service in 1944.) But he saw action in only four games and nine games respectively during the latter two-year period, combining for a 2-1 won-lost record.

Extending his career in the Pacific Coast League, Bridges pitched for the Portland Beavers from 1947 to 1949; compiled a 33-25 record; and pitched a no-hitter against the San Francisco Seals in the last year of his professional career. Though he was a member of the Seals and Seattle Rainiers in 1950, he did not play in any games for either team.