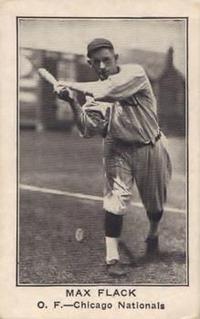 The New York Giants were at the end of a grueling Western road trip in the dog days of summer, likely anxious to return home after 15 days on the road.1 There were no off days for the Giants on their 18-game, four-city trip, marked by steamy train travel and beginning with a stop in Pittsburgh on July 25. Next were six games in Cincinnati, including back-to-back weekend doubleheaders, followed by a sojourn in St. Louis, the westernmost outpost of the National League in 1921. Then off to Chicago.

Managed by the legendary authoritarian John McGraw, the Giants were aiming for a National League pennant and they were methodically marching in that direction. Like a long-distance runner, waiting to turn on “the kick,” the Giants were in second place nearly all summer long, persistently pacing the league-leading Pittsburgh Pirates.

Meanwhile, just three years removed from the 1918 pennant, the Chicago Cubs were floundering in seventh place of an eight-team league, so much so that first-year manager Johnny Evers was relieved of his duties and replaced by Bill Killefer on August 4. Killefer was managing just his first series against the venerable McGraw.2

Through a quirk of fate in the schedule, it was a Chicago-New York baseball matchup week. While the Giants were playing at Cubs Park,3 the White Sox were playing the New York Yankees in New York City at the Polo Grounds, the shared home of the Giants and Yankees. (There was no Yankee Stadium until 1923. Babe Ruth was still working on building that in 1921.)

Even the Gotham and Windy City Fire Department baseball nines were squaring off in a best-of- three-series set to start the next day in Comiskey Park on the South Side of Chicago. Baseball was still establishing its identity as a national pastime, caught at the crossroads of town-rivalry contests and the major leagues as we know it today.4 In fact, the Firemen’s game had more fanfare and more fans (nearly 15,000) in attendance than this Cubs-Giants contest (10,000 paid).5

The New York Daily News reported that a contingent of the New York Fire Department baseball team was even on hand to support their Giants at Cubs Park for this game and was given “the thrill of looking at a home run.”6 (This was an unintentional nod to the long ball; what was once a special event now becoming more commonplace as the 1921 game now moved from the Dead Ball Era.)

That thrill occurred in the very first inning when Frankie Frisch, the 23-year-old switch-hitting future Hall of Famer Fordham Flash hit a two-run blast over the right-field wall off Cubs starter Elmer Ponder to give the Giants a 2-0 lead.7

The lead would last until the Cubs batted in the bottom of the second. They sent seven batters to the plate to face the Giants starter, Fred Toney.8 Three batters hit safely and two of them scored to tie the game, 2-2.

Not to be outdone, the Giants sent eight batters to the plate in the top of the third and three of them scored, gaining a three-run advantage. They added to their lead even further when George Burns lifted a fourth-inning Ponder offering into the left-field bleachers, giving the Giants a solid 6-2 lead, which they carried into the home half of the sixth inning.

After the second inning, Toney seemed to be sailing along nicely, having allowed just one hit in innings three through five, but Turner Barber led off the sixth inning with a single to center. George Maisel followed with another single. Barber scampered to third ahead of Irish Meusel’s throw. The speedster Maisel alertly took second to put runners on second and third with nobody out. A groundout to shortstop scored Barber. Maisel scored next on a double off the bat of Bob O’Farrell, cutting the deficit to 6-4.

McGraw then lifted Toney from the slab in favor of Shuffling Phil Douglas. Killefer responded by inserting left-handed pinch-hitter Babe Twombly. Douglas immediately gave up a single to the Cubs’ version of Babe, moving O’Farrell to third base.

With runners on first and third and one out, Max Flack hit a seemingly innocent grounder to the pitcher. To read Daniel9 from the New York Herald telling the tale, it was at this point when the Cubs were awarded the chance to win the contest because of a “ludicrous [Douglas] effort to imitate Mercury and Charlie Paddock.10… Flack hit a weak dribbler to Phil and O’Farrell started for home. … Phil chose to dash after O’Farrell himself [but when O’Farrell stopped] Douglas threw the ball over [third baseman] Frisch’s head and O’Farrell scampered in.” Flack was safe at first. Twombly was safe at second.

Charlie Hollocher then hit a single to left that drove in Twombly with the tying run and moved Flack to second. With runners on first and second, further threat was eliminated when, according to Daniel, “Kelleher very considerately hit into a double play.” But it was a new game, tied 6-6 at the end of six innings.

The seventh inning was scoreless. Frank Snyder led off the Gotham half of the eighth with a blast to deep right field, over the same wall that Frisch had cleared, to regain the advantage for the New Yorkers at 7-6.

All looked good for the New Amsterdam Nine as the slender one-run lead held into the bottom of the ninth inning. Douglas was still on the hill and retired the first batter to face him. John Kelleher then singled. Ray Grimes struck out and Barber came to the plate with two outs as the Cubs’ last chance to win. As the New York Daily News described it, “The Cubs grabbed the game out of the fire [on] Barber’s timely triple that tied up the affair.”11 Douglas retired Maisel on a popup to first to end the inning, but the Cubs had drawn even, 7-7.

Virgil Cheeves, a 20-year-old Cherokee member from Oklahoma, was still on the slab for the Cubs in his second inning of relief, as the game moved to overtime to decide a winner. Cheeves got through the top half of the 10th inning, facing four batters, retiring three.

It was the home team’s turn to try to take advantage of their last raps. With one out, O’Farrell ripped a double to right, his third of the game. Batting for himself, Cheeves lifted one to right which was caught, but was hit far enough to send O’Farrell to third base.

Two outs. Bottom of the 10th inning. Tie score. Flack facing Douglas with the game on the line. “Three home runs by the Giants did not disturb the Cubs in the least. … Flack, who hadn’t copped a swat all day, slapped one safely … and drove home the winning run. The bats of Maisel and O’Farrell were most potent in the fray.”12 The Cubs beat the Giants, 8-7.

The Giants were 14-8 versus the Cubs in the 1921 season. For this match, Cheeves was the winner, and of the eight games the Cubs won, he was the winning pitcher in four of them, giving him a reputation as a “Giant-Killer” that year.13 The Cubs prepared for a 28-game stretch with 27 games on the road that would last until September 6. Winning just six of those games would help to confirm their seventh-place finish.

The Giants headed home to New York and eventually did edge the Pirates to the finish line and win the NL 1921 title after catching fire in late August and September.14

The author consulted Baseball-Reference.com and Retrosheet.org for box scores, play-by-play information, and other pertinent data.

The author also accessed SABR.org and Baseball Magazine, November 1921 issue, for the flavor of baseball in 1921.

To further help capture a visual picture of Wrigley Field in 1921, the author consulted these sources:

The Chicago Daily News negatives collection, from the Chicago History Museum website. This photo collection gives a vision of what 1921 Cubs Park looked like at the time. https://images.chicagohistory.org/search/?searchQuery=Chicago+cubs+1921

1 The National League of 1921 was informally segmented with an East-West divide. To the east, the New York Giants, Brooklyn Robins (Dodgers), Boston Braves, and Philadelphia Phillies. The West consisted of the Pittsburgh Pirates, Cincinnati Reds, St. Louis Cardinals, and Chicago Cubs. With no air-conditioning, it was often a hot and dusty road trip for the teams. Lengthy trips by rail were the norm until air travel supplanted the rails in the 1960s as the preferred mode of team transportation.

2 As was common at the time, the press, sometimes without a clearly definitive team name or because of the press style at the time would refer to a team by its manager. The Cubs were dubbed by some in the press as the “Killefers” or “Killies” for multiple accounts of this game. (Likewise, the Brooklyn club, later called the Dodgers, was known as the Robins in 1921 after manager Wilbert Robinson.)

3 In 2021 only two major-league ballparks remained in existence from a century ago. Born as Weeghman Park in 1914, the ballpark at 1060 West Addison Street in Chicago was just seven years old for this contest. Its evolution had not yet fully begun, but the name was changed to Cubs Park in 1920. The dimensions were reachable to left and right fields and just a dream for center: 343 feet to left, 298 to right and 440 to center. There were bleachers in front of a left-field wall that ran adjacent to Waveland Avenue extending west to east from the foul line to a tall field-level scoreboard in center field. The right-field boundary was just a 10-foot wall that ran parallel to Sheffield Avenue with no bleachers in right or center. There were no vines, no curves in the outfield brick wall either. The infield grandstands were just a single deck and the ballpark held 18,000 fans before renovations began in 1923. The oldest ballpark in the major leagues is Boston’s Fenway Park, which opened in 1912.

4 Off-day exhibition games were common in the era. The “Cubs Notes” column of the August 10, 1921, Chicago Tribune confirmed, “The Cubs left last night to play an exhibition game in Akron … then will hit Pittsburgh.”

The New York Evening World had an August 10, 1921, entry datelined Columbus Ohio, that “Babe Ruth and the New York Americans are scheduled to play an exhibition game with a local semi-professional team here next Sunday.”

5 “New York Firemen beat Chicago Rivals by 5 to 2,” New York Herald, on August 11, 1921: 10. (The contest had a whole lot of hoopla. “The delegation was accorded a big ovation upon arrival at the park. Fire bells clanged and the crowd stood and cheered for several minutes.”)

8 Fred Toney once threw a 10-inning no-hitter for the Cincinnati Reds on this field on May 2, 1917. His opponent on the hill, Hippo Vaughan, threw hitless ball as well through nine innings. Widely regarded as the only “dual no-hitter” ever thrown, the official honor was erased in 1991 by Major League Baseball’s Committee for Statistical Accuracy.

9 “By Daniel” was a byline used by longtime sportswriter Daniel Margowitz. It is best chronicled in the SABR BioProject by Warren Corbett, https://sabr.org/bioproj/person/dan-daniel/.