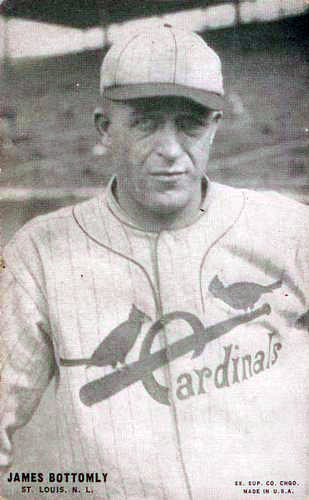 Midway through the 1927 baseball campaign, it appeared as if fans read only about the American League in the newspapers. Specifically, did the Yankees win yesterday? Did Ruth or Gehrig hit another home run? New York’s Murderers’ Row was a lock to grab the pennant. The Bronx Bombers had a winning percentage of .702 by mid-July. They ended the season with a mark of .7141 and outscored their opponents 975-599.

It was a much closer pennant race in the National League. Despite their record of 46-34 (.575), the defending World Series champion St. Louis Cardinals found themselves in third place in the standings on July 14, five games behind the front-running Chicago Cubs and 3½ below the second-place Pittsburgh Pirates. The 32-47 Philadelphia Phillies (.405) were 18½ games out, entrenched in sixth place.

To gain some ground, the Cardinals had to win a lot more games. St. Louis had been on the road since July 1 and the ballclub was not impressing its fans, losing nine of 16 games. On July 15 the Cardinals played the fifth of a five-game series against Philadelphia but still had 11 more road games before returning to Sportsman’s Park. Meanwhile, the Phillies were in the midst of playing 31 of 33 games at home,2 but after winning five of the first seven games of the homestand, they dropped 11 of the next 16.

The final game of the Cardinals-Phillies series was a Friday-afternoon affair in front of roughly 1,000 spectators at the Baker Bowl. Alex Ferguson, a right-hander who had spent the last two years with three different teams, got the start for the Phillies. He was seeking his sixth win of the season and was opposed by the lanky (6-foot-2-inch, 160-pound) Bob McGraw, also a righty. McGraw began 1927 with the Brooklyn Robins but came to St. Louis in a May 3 trade for Jake Flowers.

The Cardinals had a mini-rally in the top of the first, with Specs Toporcer reaching on an error and Frankie Frisch and Jim Bottomley hitting singles (although Toporcer was thrown out trying to advance to third on Frisch’s single). Ferguson worked out of the jam, keeping the Cards scoreless.

McGraw was also in trouble early on but was unable to contain the Phillies. After retiring Dick Spalding and Heinie Sand in the bottom of the first, he gave up a single to Cy Williams, a double to Freddy Leach, and then another single to Jimmie Wilson, which knocked in two runs. In the bottom of the third, the Phillies again got to McGraw with two outs. Williams walked and Wilson stroked another single. The ball escaped left fielder Wattie Holm; Williams scored and Wilson scooted to second on the error. Dick Attreau drove an RBI single to right, and Wilson’s run made it 4-0 in favor of the Phillies.

In the top of the fifth, the Cardinals ended the shutout. Johnny Schulte walked but was forced at second on a grounder by Heinie Schuble. With two outs, Holm singled, and then Toporcer doubled, driving in Schuble. Philadelphia answered in the bottom of the inning. Spalding doubled to get things going. Sand sacrificed Spalding to third. Williams’s double scored Spalding. Leach rolled a grounder to Cardinals second baseman Frisch, who mishandled the ball for an error, and everyone was safe. Wilson lifted a sacrifice fly to center, and Williams tagged and scored. Attreau tripled to right, and suddenly it was a 7-1 ballgame. St. Louis manager Bob O’Farrell made a pitching change, calling on Hi Bell to relieve McGraw.

According to the Philadelphia Inquirer, “the old ball game was packed away ‘on ice’ with a [six]-run lead in the fifth inning.”3 That is, until “a heat wave of Cardinals base hits melted the lead away and the victory trickled out of the spout into the St. Louis bucket.”4 Bottomley, who had singled in the fourth, led off the sixth and “plugged a double to the top of the right field wall which ripped off the top board but did not go over.”5 Billy Southworth singled, plating Bottomley. After Taylor Douthit popped out, Schulte and Schuble hit back-to-back singles and Southworth scored. An out later, Holm doubled, and both baserunners scored. The Phillies’ lead was down to two runs.

The Phillies were retired in order in their half of the sixth, and with one down in the seventh, Bottomley hit the ball so hard it “needed no outside help to land on the site of the proposed new railroad depot.”6 It was his 10th home run of the season, cutting the deficit to 7-6. That blow sent Ferguson to the showers, and Claude Willoughby replaced him on the mound. Willoughby had started the third game of this series but was roughed up for five runs in five innings pitched. He retired Southworth and Douthit to end the inning. Sand doubled to start the bottom of the seventh, but his teammates left him stranded at second.

In the top of the eighth, Schulte blasted his fifth home run well beyond the right-field wall to tie the score. Schuble doubled to right, and Phillies skipper Stuffy McInnis lifted Willoughby in favor of veteran Jack Scott.7 Les Bell grounded out, but then Holm lined his second double of the game, and Schuble scored for an 8-7 St. Louis lead.

Bottomley led off the top of the ninth. He foul-tipped the first offering from Dutch Ulrich, who had entered as the Phillies’ fourth hurler of the game. On the next pitch, Bottomley swung and “parked the onion over Fred Leach’s new haircut”8 in deep center for a triple. That extra-base knock gave him the cycle. After Southworth fouled out, Douthit grounded a ball to shortstop Jimmy Cooney. Cooney threw home in hopes of catching Bottomley running from third, but Sunny Jim beat the throw, giving the Cardinals an insurance run (although the St. Louis Globe-Democrat described the run as “superfluous”9).

Southpaw Bill Sherdel had entered the game in the eighth to do the mound-work for St. Louis. The first batter he faced in the bottom of the ninth was Bubber Jonnard, who singled to right. Sand and Williams were both retired, and with Leach in the batter’s box, Jonnard advanced to second, and then to third, both times “unmolested”10 (on defensive indifference). It was all for naught, as Leach popped out to shortstop Schuble for the final out of the game. St. Louis had prevailed, 9-7.

In the victory, Bottomley had collected two singles, a double, a triple, and a home run in five times at the plate. With his 5-for-5 performance, Bottomley’s batting average jumped to .330. Further, “the blows were all ‘legits,’ real base hits that whistled around the field.”11 Bottomley’s teammates had cracked an additional 10 hits.

The quoted phrase in the title is from Stan Baumgartner, “Bottomley Terror with Ash as Late Flurries Top Phillies,” Philadelphia Inquirer, July 16, 1927: 10.

1 Trivia: The 1927 Yankees’ winning percentage was coincidentally exactly one point for each of Babe Ruth’s regular-season round-trippers.

2 The Phillies did play a doubleheader against the Robins on July 3 in Brooklyn, departing Philadelphia after a July 2 twin bill and returning home for another doubleheader on July 4. In the span of five days (July 2-6), the Phillies played nine games, including four doubleheaders.

7 Scott led the National League in appearances in 1927 with 48. Initially a starter for the Phillies, he often pitched out of the bullpen.