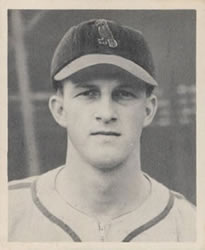 Stan Musial used all of Ebbets Field to spray four hits in hitting for the cycle, accomplishing a rare feat in baseball. The first-place Brooklyn Dodgers hosted the second-place St. Louis Cardinals in the third game of a four-game series and won handily, 14-1, before a crowd of 34,042 fans. This was the fourth largest crowd of the season for the Flatbush faithful, but many did not stay to see the final out. Howie Pollet, St. Louis’ 12-game winner, faced off against Don Newcombe, who was in search of his eighth victory for Brooklyn.

Newcombe would have to wait another day for that win. In fact, he threw only 12 pitches before being lifted for reliever Paul Minner in the top of the first inning. Red Schoendienst and Lou Klein started the game for St. Louis with back-to-back singles. With runners at the corners, Newcombe uncorked a wild pitch, allowing Schoendienst to score. On a 3-1 count, Musial smacked a triple to deep center. Klein scored and Newcombe hit the showers. Brooklyn manager Burt Shotton brought in left-hander Paul Minner to face the Cardinals’ clean-up hitter, Enos Slaughter. Slaughter singled and Ron Northey followed with a double to left. Five batters had five hits and St. Louis had an early four-run lead.

Two innings later, the Cardinals sent eleven batters to the plate. Minner only faced the first three. Slaughter doubled, Northey singled, and Rocky Nelson tripled on a line drive to right. The second St. Louis triple of the game brought in the second reliever for the Dodgers, Carl Erskine. The Cardinals put up five more hits, including a single by Musial. With the score 8-0 and runners on first and second, Musial sent a ground ball to right field. Carl Furillo fielded the ball and threw home to catcher Bruce Edwards, whose error then allowed two runners to score, making it a 10-0 ballgame.

The Dodgers had a chance in the first inning to score, putting two runners aboard, but Pollet worked his way out of the jam. In the bottom of the third, however, Pee Wee Reese and Billy Cox hit singles, and one out later, Jackie Robinson grounded a single through the infield to left field to plate Reese. That was the lone run Pollet would allow.

In the top of the fifth with two outs, Musial sent a 3-1 Erskine offering into the right-center seats for a solo home run. Two innings later, he completed the cycle with a double to left-center field, driving in Pollet and Klein. He then scored the fourteenth run of the game for St. Louis on a Chuck Diering single. In his final plate appearance, Musial drew a walk in the eighth inning. His line for the day was four hits and a walk in five at-bats (he had flied out to the gap in right-center in the second inning), three runs scored and four driven in, although he also accounted for two unearned runs in the third inning. Slaughter added three hits for the Cards, who amassed 16 safeties in the game. Catcher Joe Garagiola was the only starting player for St. Louis without a hit in the game.

Musial became the eleventh St. Louis batter to hit for the cycle. It had been nine years since Johnny Mize cycled (July 13, 1940) and it would be another eleven years before Bill White would accomplish this feat (August 14, 1960).1

Reese and Robinson were the offensive standouts for Brooklyn, each with a 2-for-4 performance, and they are the two players who figured in the Dodgers’ lone tally. Erskine pitched seven innings for Brooklyn. He faced 34 batters and allowed seven runs (six earned) on eight hits and four walks. The Cardinals’ Pollet, on the other hand, pitched superbly, scattering eight hits in a complete game. In “notching his thirteenth victory of the campaign, [he] never had to fret. Handed four runs before a Cardinal had been retired in the first, the stylish southpaw was able to coast.”2

In the four-game series with the Dodgers, Musial had 15 at-bats and connected nine times for hits, including two doubles, two triples, and two home runs. In the nine games played at Ebbets Field to this point in the season, Musial was batting .559 (19 for 34). The Cardinals’ victory extended their winning streak to five games (it would reach nine – with two ties – before a 4-2 loss to Brooklyn in St. Louis). The victory with Musial’s cycle put them a half game ahead of the Dodgers in the National League pennant race. As Musial told reports about the St. Louis success, “Cream always comes to the top.”3