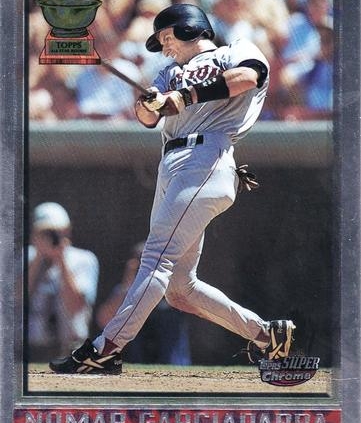 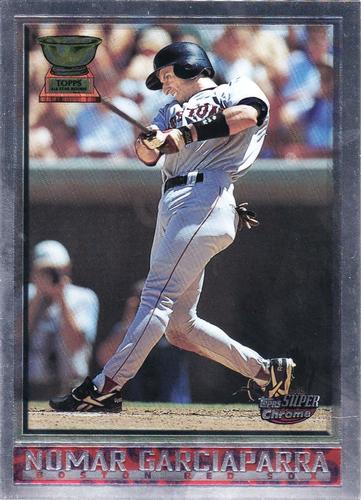 Boston’s Fenway Park is best-known for its 37-foot-tall left-field wall, nicknamed the Green Monster. Located just 310 feet from home plate, it is an inviting target for right-handed sluggers and routinely turns hard line drives into long singles and high fly balls into cheap home runs. But the Pesky Pole,1 the right-field foul pole located just 302 feet down the line, has also seen its share of cheap home runs – normally on balls that wrap around the pole.

But in this game, Red Sox shortstop Nomar Garciaparra used the short wall at the base of the pole for an inside-the-park homer which – combined with seven scoreless innings from ace Pedro Martinez – propelled Boston to a 6-3 win over Toronto before a Sunday afternoon crowd of 33,059.

Boston entered the game in second place in the AL East with a record of 59-43 – normally good enough to be in contention for a division title. But this year, the New York Yankees were in the midst of a historic season2 and were 15 games ahead of the Red Sox. Boston was, however, leading the wild-card race by 3½ games over Texas. Toronto was fourth in the division with a 52-53 mark3 and also fourth in the wild-card race, 8½ games back.

He was opposed by Pat Hentgen (9-7, 4.93), who was 0-3 with a 7.43 ERA in his last four starts. Hentgen – who had started 177 games for Toronto since becoming a regular in 1993 – was angered earlier in the week by reports that manager Tim Johnson and general manager Gord Ash had considered starting former Boston star Roger Clemens on three days’ rest if this game was critical to the Blue Jays’ wild-card chances.

Hentgen talked openly of being traded. “It’s frustrating to me that it was even contemplated,” he said. “I’ve been an organizational guy my whole career and if they want to put me in the bullpen, that’s fine. All I do is try my best. If that’s not good enough, I’d like to get traded if they don’t want me to start here.”4

Tony Phillips led off the game for Toronto with a single and moved to second on Shawn Green’s grounder, but Martinez retired the next two Blue Jays. Hentgen had a similar bottom half of the inning – Darren Bragg singled to right and advanced on groundouts by John Valentin and Mo Vaughn but was stranded at third when Garciaparra grounded to short.

The Red Sox took the lead in the bottom of the second when Damon Buford hit a one-out solo homer over the Green Monster.

In the third, Phillips was walked by Martinez and went to third on a wild pitch and groundball but was stranded when Jose Canseco popped to third. Martinez ran his string to eight consecutive outs when he retired the Blue Jays in order in the fourth and fifth.

Hentgen worked through trouble in the third by getting Garciaparra to strike out swinging with two runners on. The following inning, he allowed back-to-back singles to Buford and Scott Hatteberg before getting Mike Benjamin to hit into a 4-6-3 twin killing.

Martinez worked out of his own jam in the sixth. Phillips and Green opened with singles. After Canseco lined out to Garciaparra at shortstop, Martinez fanned Carlos Delgado and Mike Stanley. “I had to turn it up a notch there,” said Martinez after the game. “Delgado is a great, great hitter. You have to respect him.”5

Boston tacked on a run on the sixth. With one out, Garciaparra singled. Troy O’Leary followed with a drive that left fielder Canseco misjudged. The ball went over his head for a double; he misplayed the carom off the wall, allowing Garciaparra to score for a 2-0 lead.6 Hentgen walked Buford but retired the next two batters on grounders to end the threat.

In the seventh, Martinez retired Darrin Fletcher and Tony Fernandez on flies to center but then was threatened again. An infield single by Ed Sprague and a double down the line in left by Alex Gonzalez put two runners in scoring position. But Martinez got Phillips to ground out to first for the third out.

Hentgen plunked Bragg with one out in the seventh. One out later, Vaughn lined a single to center. Right-handed batter Garciaparra stepped in and lined a 1-and-2 pitch down the line in right that landed about 10 feet to the left of the Pesky Pole.

Phillips ran hard for the ball but, realizing that he would not make the catch, pulled up near the wall. The ball took one hop and kicked off the base of the wall near the pole and away from Phillips. It rolled to the base of the right-field wall in front of the corner of the bullpens.

Bragg scored from second. Vaughn lumbered around the bases with Garciaparra gaining on him all the way. By the time Phillips retrieved the ball and fired to his cutoff, Vaughn had scored; Garciaparra crossed the plate right behind him.7

Garciaparra’s dash around the diamond was the only inside-the-park homer of the 229 home runs that he would hit in his career. It was the 43rd inside-the-park homer in the 97-year history of Fenway Park and the first by the Red Sox since Luis Rivera hit one against Oakland’s Mike Moore on June 21, 1991. In that game the ball rolled past A’s right fielder Jose Canseco – who was playing left field in this game.

“I was thinking triple first and then whatever happened was extra,” remarked Garciaparra afterward. “I just put my head down and ran hard and Wendell [Kim kept sending me home and I was going to do it.”8

Boston manager Jimy Williams complimented his shortstop after the game, saying, “I saw the ball roll down the corner. The kid can run so he had a shot at it. He was running hard all the way, just like he always does.”9

Boston right fielder Bragg agreed. “It’s happened before in the right-field corner at Fenway. It’s going to happen again. It’s like the Bermuda Triangle out there. You get lost out there and it’s a tough corner to play. You’ve got to make a decision whether to go for the ball or not. On something like that, you’ve got to go for the ball. If you don’t get to it, it’s trouble.”11

(After the seven-year drought, the Red Sox would not wait long for their next inside-the-park home run – just two days later in their next game, leadoff batter Darren Lewis connected in the sixth inning against T.J. Mathews at Oakland.)

With a 5-0 lead after seven innings, manager Williams brought in lefty David West,12 who allowed a one-out homer over the Green Monster to Canseco13 and a single to Delgado before he was lifted for Derek Lowe.

The Red Sox got the run back in the eighth against Dave Stieb. After 14 years as a star with the Blue Jays, Stieb had appeared in four games for the 1993 Chicago White Sox before retiring. He came out of retirement in 1998 and rejoined the Blue Jays in June; this game was the seventh appearance of his comeback.

Stieb walked Hatteberg, and one out later Midre Cummings bunted for a hit, moving Hatteberg to second; he scored when Bragg lined a single to short right-center.

After Lowe allowed a leadoff single and one-out walk in the ninth, he was replaced by Tom Gordon. A passed ball moved the runners up before a sacrifice fly to left by Phillips and a single to right by Green made the score 6-3. Gordon got Canseco to pop out to second to end the game.

The 24-year-old Garciaparra ended the 1998 season with what would be career highs of 35 homers and 122 RBIs while batting .323. He finished second in the American League MVP voting behind Texas Rangers slugger Juan Gonzalez. Martinez finished 19-7 with a 2.89 ERA and finished second behind Toronto’s Clemens in the AL Cy Young Award race.14

The Red Sox finished second in the AL East at 92-70 – a whopping 22 games back of the Yankees, who won 114 games – but won the AL wild card by four games over Toronto. They were eliminated in the ALDS by the Cleveland Indians, three games to one.

This game was the sixth of 10 games that the author and his father attended as part of a Jay Buckley baseball tour. The ten-day trip included games in Milwaukee (doubleheader), Pittsburgh, Baltimore, New York (Yankees), Boston, Montreal, Toronto, Detroit, and Chicago (Cubs). Also included was a day at the Baseball Hall of Fame in Cooperstown, a tailgate party at County Stadium, and free time for shopping and sightseeing in Baltimore, Boston, Montreal, and Toronto.

While the rest of the tour group sat out in the right-field grandstand for this game, the author and his father sat above the third-base dugout – before leaving for the trip, the author had purchased the season tickets of a generous SABR member. The author explored Fenway Park before the game – and had a picture made as he reached out to touch the edge of the Green Monster and another one as he stood near the Pesky Pole. This is his only game at Fenway Park.

1 The right field foul pole at Fenway Park is named after beloved Johnny Pesky who was associated with the Red Sox as a player, manager, coach, broadcaster, and goodwill ambassador from 1942 until his death in 2012. For the story of how the foul pole came to be named after Pesky, see Origin of the Pesky Pole Feeds Red Sox Lore – The New York Times (nytimes.com).

2 The Yankees beat the White Sox on this date to improve to 73-26, the best 99-game start in team history.

3 The Blue Jays also had a tie game; on April 26 their game at Chicago was rained out after six innings with the score knotted at 5-5.

7 Highlights of the game, including Garciaparra’s inside-the-park home run, can be seen here starting 4:34 into the video. https://www.youtube.com/watch?v=fBNQJMSlAzs.

12 West was called up two days earlier. He had last appeared in the majors on September 25, 1996, for Philadelphia. He appeared in six games for Boston in 1998, in what was the final year of his career.

13 The blast was Canseco’s 29th of the season. Canseco also homered in the June 21, 1991, game at Fenway Park when Rivera hit the previous Red Sox inside-the-park home run.

14 The second-place finish prevented Martinez from winning four consecutive Cy Young Awards; he had won the award in 1997 with Montreal and would win in both 1999 and 2000 with Boston.