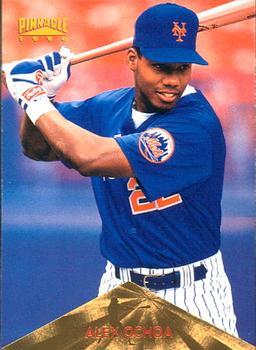 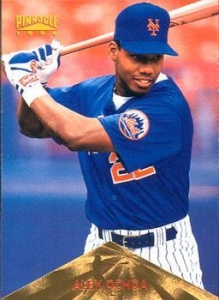 The New York Mets were struggling as they entered July 1996. In fourth place in the National League East, trailing the division-leading Atlanta Braves by 14 games, New York called up Alex Ochoa from Triple-A Norfolk in the middle of June. Mets fans were looking for someone to spark the team and many felt that the 24-year-old Ochoa could be that person.1

Ochoa arrived when Bobby Bonilla was traded to the Baltimore Orioles on July 28, 1995. When the trade was announced, Mets general manager Joe McIlvaine said of Ochoa, “He’s a five tools guy. If you break down his tools, his arm is the strongest, similar to Mark Whiten’s. He can play right field and he is a good runner. The most questionable of his tools is power. We think he is a 15-homer type guy, not a 30-30 guy, but he’ll probably hit for decent average.” 2

Mets fans got a peek at Ochoa at the end of the 1995 season, when he appeared in 11 games down the stretch. In that short time, he batted .297 with 11 hits. Ochoa was batting .339 with a .528 slugging percentage in Norfolk when he was called up. In his first 10 games with the Mets, Ochoa continued to hit, batting .306 with a .500 slugging percentage.

Mets manager Dallas Green said of Ochoa’s performance, “He’s settled the right field position down, that’s what you want to look for. It’s one thing to get here and another thing to take advantage of it.”3

The Mets lost the first two games of their series with Philadelphia, which was mired in the division cellar. Left-hander Terry Mulholland started the series finale for the Phillies.

It was the first time Mulholland was facing the Mets in 1996. A Phil from 1989 through 1993, the 33-year-old Mulholland had returned as a free agent in the offseason after spending two unimpressive seasons with the New York Yankees and San Francisco Giants. He entered the game with a 6-6 record and a 5.12 ERA.

Mulholland had an uneventful first inning, throwing 13 pitches to get the Mets out in order. But things did not go as smoothly in the second. Jeff Kent led off with a single. After Todd Hundley flied out, Ochoa singled. Butch Huskey then brought home Kent with the third New York single of the inning, giving give the Mets the lead, 1-0.

Mets starter Mark Clark, in his sixth major-league season and first year with the Mets after a spring-training trade brought him from the Cleveland Indians, entered the game pitching the best of his career. Over the past nine starts, he had compiled a 7-1 record with a 1.93 ERA. Clark, like Mulholland, got through the first inning with no problems. Like Mulholland, the right-hander also retired the side in order on 13 pitches.

But Clark got in trouble in the second. Jim Eisenreich singled with one out. Then Clark’s second pitch to Pete Incaviglia had the brawny batter scrambling to get out of the way as it went for his head. After Incaviglia fouled off another offering, he connected on Clark’s fifth pitch, sending it bouncing off the right-field wall.4

Ochoa hit the wall hard. The collision sent pieces of the wall flying onto the field after Ochoa’s attempt at a leaping catch. He was unable to secure the ball and by the time he recovered and chased it down, Incaviglia was on third and Eisenreich had crossed the plate with the tying run. (“I hit the wall pretty hard,” Ochoa said after the game as he iced down his sore shoulder. “My shoulder is pretty sore, but I guess it’s all right.”5)

One batter later, Incaviglia almost gave Philadelphia the lead when he tried to score on Benito Santiago’s grounder to first. He had done the same thing after hitting a triple two days earlier and scored as Hundley tried to avoid a collision. This time Hundley held his ground, caught Huskey’s throw home, and tagged Incaviglia for the out.

Philadelphia did go ahead in the third. Ricky Otero led off with a single and came home on Todd Zeile’s two-out double to put the Phillies up 2-1.

New York’s bats came alive in the fourth. Three straight extra-base hits—doubles by Kent and Hundley and a triple by Ochoa into the gap in right-center field—scored two runs. Mulholland got Huskey to pop out, but rookie Rey Ordonez’s single scored another run and the Mets went ahead 4-2.

After an uneventful fourth inning, Philadelphia narrowed the gap in the fifth. Otero had another leadoff single and moved to second on a groundout. After Clark walked Gregg Jefferies, Ordoñez turned Zeile’s grounder to shortstop into a force at third. But Eisenreich followed with a single, driving in Jefferies to make the score 4-3.

Ochoa led off the sixth with a double, bringing him just a home run away from the cycle. Huskey followed with a home run to increase the Mets’ lead to 6-3. Phillies manager Jim Fregosi pulled Mulholland and summoned Ron Blazier, who closed out the inning.6

The Mets could not keep their lead long. In the bottom of the sixth, Santiago reached on an error by Kent, his 18th of the season and the most on the Mets. Clark struck out Kevin Stocker but walked pinch-hitter J.R. Phillips. A pair of singles scored Santiago and Phillips and sent Clark to the bench. Reliever Paul Byrd gave up a single to Jefferies, bringing in the tying run, before striking out Incaviglia to end the frame.

Both teams failed to score in the seventh. Ken Ryan took over pitching duties for the Phillies in the eighth. After he got Hundley to ground out, Ochoa connected for a home run over the left-field wall for his fourth hit of the game, completing the cycle and giving the Mets a 7-6 lead.

Asked later if he knew that he needed that home run for the cycle, Ochoa told reporters, “Of course I did. I thought about it in the outfield and when I was in the on-deck circle.” But when the count when to 1-and-2, he said, he stopped thinking about it.7 “I didn’t say anything to anybody. I was just trying to stay within myself. And, after I got two strikes, all the thinking about the cycle went down the drain. I was just trying to hit the ball hard.”8

Ochoa was the sixth Mets player to accomplish the cycle and the first since Kevin McReynolds in August 1989. No rookie had hit for the cycle since St. Louis’s Ray Lankford in September 1991. The last player to hit for the cycle against the Phillies was Gus Bell of the Pirates, who did it at Shibe Park on June 4, 1951.

Ochoa said that when he realized that the ball would clear the fence, “I think a smile came over my face.” Hundley said he told him playfully to “speed up his trot” when he met him at home plate. “I didn’t feel like getting hit. But if he keeps hitting them out of the park, I believe I can take a few bruises for him.”9

Huskey followed with a triple, leaving him only a double shy of his own cycle. When Ryan walked Jose Vizcaino to put runners at the corners, Fregosi pulled him for Steve Frey, who gave up a single to Lance Johnson to score pinch-runner Tim Bogar and put the Mets ahead 8-6.

The Mets added to the lead in the top of the ninth. Frey got Edgardo Alfonzo to fly out but Bernard Gilkey followed with a home run over the left-field wall. Frey walked Kent, who then reached second when Santiago couldn’t handle a pitch for a passed ball. After Hundley lined out, Ochoa came up. He hit Frey’s fifth pitch into the gap in left field for a double that scored Kent, giving the Mets a four-run lead, 10-6. It was Fireworks Night at Veterans Stadium but for Mets fans in attendance, the real fireworks were provided by Ochoa’s five hits.

Ochoa’s five-hit game was the 24th in Mets franchise history.10 Ochoa finished the game with 12 total bases, one shy of the franchise record set by Darryl Strawberry on August 5, 1985.

I think it’s the best night of my career,” Ochoa told reporters after the game, “Because it came in the big leagues.” Green said that Ochoa’s performance since his call-up had “settled the right field position.” He added, “That’s what you want to look for. It’s one thing to get here and another thing to take advantage of it. That’s what he’s done.”11

Doug Henry held the Phillies scoreless for the final two innings. The win left the Mets with a 38-45 record. They edged closer to .500 by going 15-13 in July but then slumped to 19-35 during the final two months of the season and never moved further up in the standings, eventually finishing 71-91. Green was fired in September and replaced by Bobby Valentine, who would eventually lead the team to the 2000 World Series.

The Phillies also didn’t improve that year. They finished with a 67-95 record, their third straight losing season under Fregosi, who had piloted them to the NL pennant in 1993. He was let go after the season and replaced by Terry Francona.

1 Rafael Hermoso of the Hackensack Record wrote that “Many have hoped that Ochoa would be the Mets’ messiah, and that’s one of the reasons the Mets waited this long to call him up.” His manager Dallas Green said, “It’s his time. This is his opportunity to take the ball and run with it. I would think it would be permanent (referring to Ochoa playing right field).” Rafael Hermoso, “Ochoa Plans to Become a Fixture in Right Field,” Hackensack (New Jersey) Record, June 23, 1996: 12.

3 Jason Diamos, “Ochoa Hits for the Cycle to Spark Mets,” New York Times, July 4, 1996: B9. The Mets had used Carl Everett and Chris Jones in right field prior to calling up Ochoa at the end of June. Neither player performed as hoped. Everett was hitting .171 and Jones .247 at the time of the Ochoa’s arrival on June 22.

4 Phil Sheridan of the Philadelphia Inquirer wrote that it was a mistake to make Incaviglia mad. He wrote that when Al Leiter expressed satisfaction at striking out Incaviglia, the Philadelphia slugger hit a home run off him later in the game on May 1. When Incaviglia thought that Andy Benes was showing him up, he tried to go after Benes but was restrained by three of his teammates. Phil Sheridan, “Mets Cruise as Ochoa Hits for Cycle,” Philadelphia Inquirer, July 4, 1996: 52.

6 Fregosi said afterward, “I thought the Mets got a lot of cheap hits off him.” Mulholland, who gave up 11 hits and six earned runs, disagreed with his manager, saying, “I don’t consider them cheap hits. There were a lot of soft line drives that found spots, but I consider that a guy working hard and not giving up an at-bat.” Sheridan.

8 Diamos, “Ochoa Hits for the Cycle to Spark Mets.”

10 The most recent five-hit performance by a Met before this game was Vizcaino against the Florida Marlins in September 1995.

11 Diamos. Ochoa batted .278 after his big night, hitting just two more home runs after his quick start. He became the Mets’ starting right fielder for the remainder of the season.