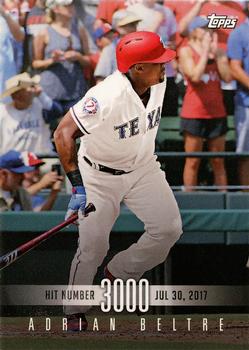 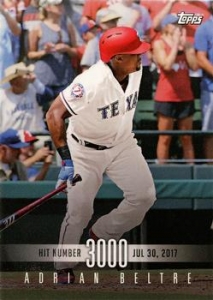 Adrian Beltré may be the least well known of players to reach the 3,000-hit plateau this millenium. His 21-year career mostly stayed under the radar nationally because he played in only one World Series. But his relative anonymity masks a superlative career. As of 2022, he was one of just five players with 3,000 hits, 450 home runs, and 600 doubles.1 He never received an MVP Award but came in second in the American League MVP vote count in 2004 and third in 2012. He was awarded five Gold Gloves for his play at third base, and was an All-Star four times.2

Beltré, a native of Santo Domingo in the Dominican Republic, came up with the Los Angeles Dodgers in 1998 at age 19 and became a free agent after the 2004 season. In spite of having a career year for Los Angeles in 2004, the team’s offer was well below what the Seattle Mariners offered him, so Beltré went to the Northwest in 2005.3 After five productive seasons with the Mariners, Beltré moved to the Boston Red Sox for the 2010 season, but Boston didn’t re-sign him after that campaign, and Beltré spent the remainder of his career with the Texas Rangers.

Beltré finished the 2016 season with 2,942 hits, 58 shy of the 3,000-hit milestone. An injury to his right calf kept him out of the lineup until late May of 2017. Returning to action on May 29, he collected 28 hits by the end of June, and 19 more before the Rangers returned to Arlington on July 24 for a nine-game homestand. With a .283/.366/.506 season batting line, the 38-year-old Beltré had shaken off any rust from his injury rehabilitation and needed just 11 hits for the milestone.

A four-hit game against the Miami Marlins on July 24, followed by a three-hit game on July 26, meant the milestone was within reach during the next three-game series, vs. the Baltimore Orioles. Three safeties in the first two games against Baltimore put Beltré at 2,999 hits going into the July 30 contest.

Both teams were in fourth place in their divisions and had struggled to sub-.500 records before the Sunday afternoon game. The Rangers were 18 games behind the Houston Astros in the American League West with a 50-53 record. Baltimore was 49-54 and trailed the New York Yankees by 7½ games in the AL East.

The starting pitchers for both teams were veteran southpaws. The Rangers’ Martin Perez, with a 5-8 record, had played his entire six-year career with Texas; the Orioles sent out journeyman Wade Miley, who was 4-9 and with his fourth big-league team in seven seasons. Beltré started at third base and batted cleanup for the Rangers, as a crowd of 32,437 looked on.

Both starters were sharp for the first third of the game. Neither team scored a run, or even advanced a runner to scoring position, during the initial three innings. Beltré had his first opportunity to reach the milestone when he led off the second, but Miley struck him out swinging on a 3-and-2 count.

After zipping through the early innings, Perez struggled in the top of the fourth. Manny Machado led off with a double, and Jonathan Schoop drew a base on balls. Three straight singles by Trey Mancini, Chris Davis, and Wellington Castillo drove in three runs. Baltimore tallied one more run on a fielder’s choice, and the Orioles led, 4-0.

Pitching with a four-run lead, Miley walked Nomar Mazara with one out in the fourth, bringing Beltré to the plate for his second shot at the milestone.

The first three pitches missed the strike zone. On 3-and-0, Beltré swung away and laced Miley’s pitch down the third-base line. The ball bounced off the stands away from left fielder Joey Rickard, allowing Beltré to reach second base standing up, as Mazara stopped at third.

Beltré’s teammates, and his family, came out on to the field. After accepting congratulations from Rangers players, Beltré hugged his wife and kids and raised both arms to the sky in response to an ovation from the crowd. The team unveiled a large banner on the outfield wall celebrating the accomplishment.

When game action continued after the celebration, second baseman Rougned Odor singled to left field, driving in two runs to cut the Orioles lead in half. Miley ended the inning without any more damage, and the score after four innings was 4-2.

The excitement that Rangers fans felt was short-lived. Three batters into the fifth, Schoop tagged Perez for a two-run homer; three batters later, Castillo hit a three-run shot off reliever Jeremy Jeffress. Baltimore’s lead had grown to 9-2. Two home runs by Odor and a homer by Mazara against the Orioles’ bullpen made the final score closer, but Baltimore won the game, 10-6.

In an on-field interview after the game, Beltré said it was “awesome” and “an honor” to become the first Dominican-born player to reach the 3,000-hit milestone. He praised countrymen David Ortiz, who retired with 2,472 hits and 541 home runs, and Albert Pujols, who was then closing in on 3,000 hits: “A bunch of great players came out of my country. To be able to be the first one is an honor and I’m humbled. I just try and do the best job I can to stay on the field and do my job. I had no idea I would be able to collect this many hits and home runs.”

Beltré became the 31st player in major-league history to reach 3,000 hits and the third in three seasons after Alex Rodriguez in 2015 and Ichiro Suzuki in 2016. He was the first Dominican-born player on the list; his countryman Pujols joined him less than a year later, in 2018. Beltré was only the fifth member of the 3,000-hit club, after Roberto Clemente (Puerto Rico), Rod Carew (Panama), Rafael Palmeiro (Cuba), and Ichiro Suzuki (Japan), born outside the Continental United States.4

After Pujols reached 3,000 hits early in the 2018 season, the Los Angeles Angels held a ceremony on June 2 to recognize his achievement, coinciding with a game against the Rangers. Before the game, Pujols threw out the ceremonial first pitch to Beltré. It was a fitting gesture, connecting the most recent players to reach the historic 3,000-hit milestone, both Dominicans, both in the starting lineup for their respective teams, and both batting cleanup.

His career record is even more impressive when compared to other third basemen. Only Paul Molitor has more hits (3,319). Only George Brett has more doubles (665). Just Mike Schmidt and Eddie Matthews (548 and 512 respectively) hit more home runs. Alex Rodriguez is the only third baseman with more RBIs (2,086).

Many thanks to John Fredland and Kurt Blumenau for their careful reading of the first draft of this article. The final result is much improved by their suggestions. The article was fact-checked by Bill Panageas and copy-edited by Len Levin.

In addition to the sources cited in the Notes, I used Baseball-Reference.com and Retrosheet.org for team, season, and player pages and logs and the box scores and play-by-plays for this game.

2 He is eligible for election to the Baseball Hall of Fame in 2023. Zachary D. Rymer, “Adrian Beltré’s 3,000th Hit Cements Place as Most Underrated Star of Generation,” BleacherReport.com, https://bleacherreport.com/articles/2724515-adrian-Beltrés-3000th-hit-cements-place-as-most-underrated-star-of-generation (last accessed March 1, 2022).