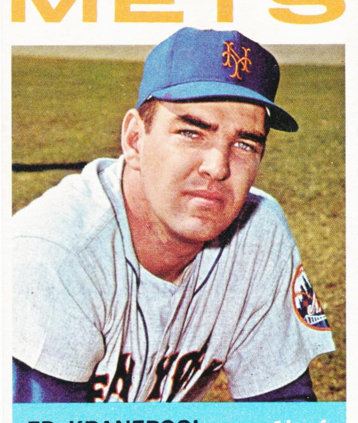 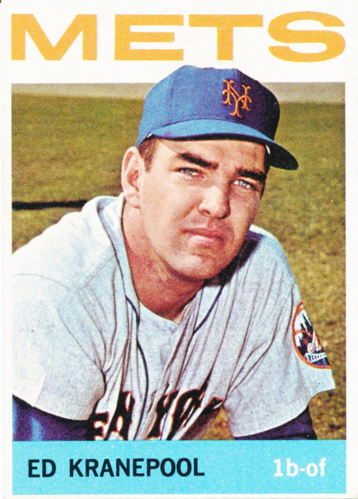 A well-known ancient proverb, attributed to Lao Tzu, asserts that “a journey of a thousand miles begins with a single step.”

For Ed Kranepool, an 18-season baseball journey spanning 2,009 appearances began with a single game. That game took place in Buffalo, New York, on July 6, 1962, when Frank Verdi1 — manager of the visiting Syracuse Chiefs of the Triple-A International League — became the first professional manager to write Kranepool’s name onto a lineup card.2

The Mets of Kranepool’s era, 1962 through 1979, became known for unpredictable, unusual, and sometimes frustratingly sloppy play. It seems fitting that the 17-year-old first baseman’s maiden appearance featured a healthy portion of such play on both sides, including four fielding errors, a hidden-ball trick, heads-up pickoff plays, and potentially run-killing goofs on the basepaths. Right from the get-go, a fan who went to watch a team with Kranepool on it might see something they’d never seen before.

All 20 major-league teams pursued Kranepool, a 6-foot-3, left-handed slugging phenom from James Monroe High School in New York City. He chose the hometown Mets because they offered a generous $85,000 bonus and a quick path to the big leagues. After signing on June 27, the newly minted high-school graduate reported directly to the big club for a few days but did not play. From there, the Mets redirected him to Syracuse to begin his career in earnest.3

The 1962 Chiefs were jointly stocked by two expansion teams, the first-year Mets and the second-year Washington Senators. More than 30 of the players who suited up for Syracuse appeared in the big leagues at some point — though that reflects more on the parent clubs’ revolving-door rosters than on the players’ talent. Perhaps the Chiefs’ most accomplished member was pitcher Larry Bearnarth, who went on to a lengthy career as a pitching coach, minor-league manager and scout. Trivia buffs may remember other names on the roster for their association with the miserable 1962 Mets, including catcher Choo Choo Coleman, third baseman Cliff Cook, and pitchers Ray Daviault and Sherman “Roadblock” Jones. The Chiefs entered the July 6 game in seventh place in an eight-team league with a record of 31-49, 23 games behind first-place Jacksonville.4

Manager Kerby Farrell had his Buffalo Bisons team playing more competitive ball — although they were slumping as they hosted the Chiefs, with 21 errors in their last eight games and eight losses in their preceding 11 games.5 The Phillies’ affiliate entered the game in third place with a 42-34 record, 10 games out of first. Twenty-eight members of the Bisons appeared in “The Show” at some point, including future Hall of Fame pitcher Ferguson Jenkins and three players who became big-league managers: Jim Frey, Lee Elia, and Bobby Wine. The team played its home games in aging War Memorial Stadium. The facility, commonly known as “the Rockpile,” also hosted the American Football League’s Buffalo Bills and — decades later — the ballpark scenes in the 1984 movie The Natural.

To start for Buffalo, Farrell selected Joel Gibson, a 6-foot-4 righty from North Carolina in his second pro season. Gibson posted a record of 12-11 and an ERA of 2.91 in 30 games, all starts, between Class A and Triple-A in 1962.6 Verdi countered with Ed Hobaugh, a righty from Michigan State University in his fifth pro season. Hobaugh appeared in 61 games with the parent Senators between 1961 and 1963, including 26 in 1962. At Syracuse in 1962, he went 3-2 with a 2.67 ERA in 10 games, five of them starts. Kranepool hit sixth in the Chiefs lineup and played first base.7

The Buffalo Courier-Express summed up the matchup tartly: “Both sides played like teams who were trying to avoid victory if possible.” Syracuse set the tone in the first inning. Their first three hitters — center fielder John Waters, second baseman Ron Stillwell, and right fielder Ed Bouchee — reached on two singles and a walk, loading the bases with none out. But Buffalo first baseman Pancho Herrera used the hidden-ball trick to catch Bouchee napping for the first out. Waters then broke partway for home on a pitch, and Buffalo catcher Bob Lipski picked him off with a peg to third. Chiefs third baseman George Risley managed to squeeze one run out of the rally by singling Stillwell home for a 1-0 lead.8

The Bisons took up the race to the bottom in their half of the first. A beaten-out bunt by shortstop Bobby Malkmus and a double by center fielder John Herrnstein put runners on second and third with one out, but Hobaugh shut down the next two hitters to keep Buffalo off the board. This pattern repeated again and again: The Bisons put six runners on base over the following three innings but could not drive any home. Hobaugh surrendered his only base on balls in the second inning, and the rest of the runners probably reached on hits: Hobaugh gave up 11 hits in the first five innings and 13 in total. (Risley and Stillwell also committed errors behind him.9)

Syracuse added to its lead in the third. Catcher Dutch Dotterer singled, and shortstop Frank Obregon’s hit-and-run single to center advanced him to third. Hobaugh grounded to short, where Malkmus appeared to throw out Dotterer trying to score — but catcher Lipski bobbled the throw home for a run-scoring error. Stillwell singled to drive in Obregon and give Syracuse a 3-0 lead. Manager Farrell summoned reliever Dick Ricketts, who worked 3⅔ hitless and scoreless innings. Forty-year-old righty Max Surkont, five years removed from his final big-league appearance after 236 appearances with five teams in nine seasons, closed out the game with two shutout innings for Buffalo.10

Buffalo finally broke through against Hobaugh in the fifth, when first baseman Herrera hit a two-run homer to cut the deficit to 3-2. Kranepool did not contribute at the plate for the Chiefs — he went 0-for-4 with three strikeouts — but he turned in a heads-up defensive play at this juncture that helped squelch the Bisons’ rally. Left fielder Jerry Reimer followed Herrera’s homer with a double to center field. Reimer kept running toward third, then turned back for second, only to find Kranepool there to take the throw from the outfield and tag him out. The Syracuse Post-Standard described it as “a smart piece of defensive thinking,” and it doubtless impressed Mets minor-league director Johnny Murphy, one of the 1,731 people on hand.11

Hobaugh’s long, stalwart day of pitching from the stretch ended with two out in the eighth inning. With the tying run on second, Buffalo sent up left-handed pinch-hitter Wally Shannon. Verdi beckoned for lefty reliever Bob Miller,12 who got Shannon to ground to Kranepool at first base to end the inning.13

Syracuse provided one last moment of sloppy, head-shaking baseball in the top of the ninth: After a strikeout by Kranepool, catcher Lipski picked Risley off first base. But the gaffe did not cost the Chiefs; Miller closed out the game with a hitless ninth inning. The game ended in 2 hours and 57 minutes, with Hobaugh earning the 3-2 win and Gibson taking the loss.14

The rest of Kranepool’s rookie season would be nomadic. After 14 games with Syracuse, the Mets shuttled him to Knoxville of the Class A South Atlantic League for seven games, then bounced him to the Auburn Mets of the Class D New York-Penn League. In 20 games with Auburn, Kranepool hit a ringing .351, helping the team claim the league championship.15 To fulfill their promise of an early call-up, and perhaps boost attendance as well, the Mets summoned the wunderkind to the big leagues in September. He played three games and collected his first major-league hit.

As for the teams that took part in his first game, Buffalo sagged to sixth place at season’s end with a 73-80 record, 20½ games behind first-place Jacksonville. Syracuse fared even more poorly, closing in last place with a 53-101 record, 41 games out. The Mets moved their Triple-A affiliation to Buffalo after the 1962 season, and when Kranepool returned to the minors for seasoning during the 1963 and ’64 seasons, it was as a member of the Bisons.16

The author appreciates the research assistance of the Buffalo State University Library.

Image of 1964 Topps card #566 downloaded from the Trading Card Database.

6 Gibson pitched parts of five seasons in the minors, missing the entire 1963 season due to injuries suffered in a preseason car accident. His career topped out with 63 games at Triple-A.

12 As is well-known, the 1962 Mets used two pitchers named Bob Miller out of their bullpen. The pitcher used here was Robert Gerald Miller, a Chicago-area native who appeared in parts of five major-league seasons between 1953 and 1962. The “other Bob Miller” was right-hander Robert Lane Miller, a St. Louis native, who appeared in parts of 17 big-league seasons between 1957 and 1974.

16 A severely slumping Kranepool also spent part of the 1970 season in Triple A. By then, the Mets had shifted their affiliation again to the Tidewater Tides, based in Norfolk, Virginia.