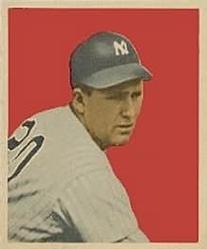 The 1947 All-Star Game was played for the first time in Wrigley Field and only the second time in Chicago. Fueled by fan complaints about the All-Star selection process in 1946, major-league baseball had returned the vote to the fans for 1947 for the eight position players in each league. Not surprisingly, Joe DiMaggio, who after a relatively poor year in 1946 was hitting .338 and leading the league in runs batted in, received the most votes, with a total of 782,194. On the National League side, the fans voted in two starters from the seventh-place Philadelphia Phillies, second baseman Emil Verban and center fielder Harry Walker, who was hitting .335 and would lead the league in batting. They were the Phillies’ first All-Star Game starters since Pinky May in 1936 and it was the only time since the inaugural game in 1933 that the perennial bottom feeders had two starters.1

Verban had almost not made it to the game. He, along with teammate Schoolboy Rowe and Phillies manager Ben Chapman, chosen as a coach, had been badly shaken up in a train accident on their way to Chicago from Philadelphia.2 Rowe had been knocked unconscious while Verban lost the feeling in his legs for a short time, but both recovered and participated in the game.3

The game itself was played under sunny skies with the wind blowing in from Lake Michigan in front of a capacity crowd of 41,123. National League manager Eddie Dyer predictably selected the Reds’ brilliant second-year pitcher Ewell Blackwell, who was 14-2 at the break, to start for the National League, while Joe Cronin of the American League picked Hal Newhouser of the Tigers after Spud Chandler of the Yankees, his first choice, came down with a slightly sore arm.4 The Indians’ Bob Feller might well have been the top pick to start but was replaced on the roster by Early Wynn after back issues forced him out in the second inning of his last start before the break.5

Commissioner Happy Chandler began the festivities by throwing out the first pitch from his box seat. Blackwell took the mound and proceeded to dominate the American League just as he had the National League all summer, striking out George Kell, retiring Buddy Lewis on an unassisted groundout to Johnny Mize at first, and then catching Ted Williams looking at a third strike. In his three innings Blackwell allowed only a single to center by Joe DiMaggio in the second while he struck out four.6 Meanwhile Newhouser mowed down the Nationals in his three innings, allowing only a third-inning pinch-hit single by the Reds’ Bert Haas.

Stylish Cardinals southpaw Harry Brecheen, who had won three games in the 1946 World Series, followed Blackwell and retired Lewis on a fly ball to Walker in center to bring Ted Williams to the plate. Williams had complained after batting practice about the hitting background in Wrigley Field, saying, “I never saw this park before and it sure is pretty, but you can’t see the ball.”7 Despite the poor background Williams had knocked half a dozen balls into the bleachers during batting practice and now he laced a double down the line in right.8 He stayed there when DiMaggio hit a high hopper to Frank Gustine at third for the second out. Lou Boudreau moved Williams to third on an infield roller that eluded Gustine, but Brecheen struck out the resurgent George McQuinn swinging on a 1-and-2 pitch to escape any damage.9

Twenty-four-year-old Yankees rookie Frank “Spec” Shea took the mound for the American League for the bottom of the inning. Shea was the first rookie to make an American League All-Star team since Dick Wakefield of the Detroit Tigers in 1943 and he certainly deserved the honor with an 11-2 record and a 1.91 earned-run average at the break. He quickly retired the first two batters on popups to bring Mize to the plate. On the third pitch Big Jawn, as he was often called by the press, stroked a fastball smack into the stiff breeze. It landed in the fifth row of the bleachers in right-center field, 380 feet from the plate, for the first run of the game.10  After a walk to Enos Slaughter, Shea got Gustine to ground to Joe Gordon at second for a force out to end the inning.

Gordon led off the top of the fifth with a long double into the left-field corner but was left stranded as Brecheen retired Buddy Rosar, Shea, and Kell. Marty Marion began the bottom of the inning with a single to left but Verban flied to Lewis in right and Brecheen forced Marion at second on a grounder to McQuinn for the second out. Andy Pafko, who had subbed for Harry Walker, then smacked a line drive to center that DiMaggio appeared to momentarily misjudge.11  It fell for a single, sending Brecheen to second. Shea, however, struck out Willard Marshall swinging to end the threat.

The American League finally broke through in Brecheen’s final inning to tie the score on Luke Appling’s pinch-hit single, a single to right by Williams that moved Appling to third, and DiMaggio’s double-play grounder to Pee Wee Reese, in for Marion at shortstop, that plated Appling. Shea then finished his three-inning stint by allowing only a harmless one-out walk to Mize in the bottom of the sixth.

Johnny Sain of the Boston Braves and Bruce Edwards of the Dodgers were the new battery for the National League in the top of the seventh. Edwards replaced Walker Cooper, who had started the All-Star Game for the fifth consecutive time, tying Bill Dickey’s record. With one out in the inning, Bobby Doerr ripped a single to left field. Edwards was recovering from a hand injury that hampered his throwing, so Doerr took off on the first pitch and stole second. Sain, trying to keep Doerr close at second, hit him in the back on an attempted pickoff, enabling Bobby to advance to third. Sain recovered to strike out Rosar for the second out. Cronin next sent the lefty-swinging Stan Spence to bat for Shea and he quickly went down in the count 0-and-2 on two sweeping curves. Sain then tried to sneak a fastball by him, but the Washington outfielder lined the pitch to left-center to allow Doerr to trot in from third with what would be the winning run.12

Warren Spahn pitched the last two innings for the Nationals, allowing only an eighth-inning walk to DiMaggio. Meanwhile the Senators’ Walt Masterson had come on to pitch the seventh inning for the American League and retired the side in order. In the eighth the National League mounted a threat when Masterson issued a one-out walk to Marshall. After he struck out pinch-hitter Phil Cavarretta for the second out, Cronin brought in southpaw relief ace Joe Page to face the lefty-swinging Mize. Mize, however, nixed the strategy by singling sharply to right field for the Nationals’ fifth hit of the game, sending Marshall to third. After Phil Masi ran for Mize, Page got Enos Slaughter to ground weakly to shortstop as Boudreau charged and made a nice play for the third out.

In the ninth Pee Wee Reese worked Page for a one-out walk on a 3-and-2 count. Eddie Stanky followed with a sharp groundball to the right side, but Doerr snagged it on a nice play and threw to Boudreau to force Reese at second for the second out. That brought up Spahn, who had not yet cemented his reputation as a good hitting pitcher. Dyer was out of position players and so sent Schoolboy Rowe, an outstanding hitting pitcher, up to pinch-hit.13  Rowe lifted a high fly ball to right field that got caught in the wind and appeared for a moment that might drop in for a hit.14  But Tommy Henrich stayed with it and made a “glittering catch” for the final out to end the game.15

The narrow 2-1 win, played in a brisk 2 hours and 19 minutes, was the 10th for the American League against only four losses.16  The game was crisply played with several good fielding plays and fine pitching, in stark contrast to the last time interleague play was held at Wrigley Field, the shoddily played 1945 World Series between the Cubs and the Tigers. American League manager Cronin summed up the game well. He said, “It was a swell game and a great victory.”17  On the other side of the ledger, National League President Ford Frick, speaking to the American League dominance, said, “This is getting painful.”18

1 Chuck Klein and Dick Bartell had started the 1933 game while members of the Phillies.

5 Two days after the All-Star Game, however, Feller was healthy enough to throw 8⅓ innings in a 2-1 win over the Philadelphia Athletics.

6 DiMaggio did reach third with two outs on a passed ball and a wild pitch. Joe Gordon then fouled off four two-strike pitches before finally swinging and missing for the third out. Drebinger:28.

8 After the game Dizzy Trout admitted that, sitting in the American League bullpen down the right-field line, he had made “an involuntary dive” for the ball that Williams hit, thinking it was foul. Fortunately, he missed. Dixie Walker asked Trout if it was one of his “confusion” plays and Trout replied that it was. James P. Dawson, “Heroes of Victory Hear Finish on Air,” New York Times, July 9, 1947: 28.

9 McQuinn had hit only .225 in 1946 for the cellar-dwelling Philadelphia Athletics. When the Athletics released him after the season, most thought that, at age 37, he was washed up. But the Yankees signed him as a free agent to fill a hole at first base and McQuinn responded with a career year. He was hitting .328 at the break and the fans responded by voting him to be the starting first baseman for the All-Star Game.

10 Mize’s home run was the first by a New York Giant in All-Star play.

11 Arthur Daley of the New York Times wrote that DiMaggio played the ball “like a tyro.” Daley: 28.

12 Drebinger: 28; Daley: 28. After the game, Sain said, “I pitched to Spence backward and threw just the kind of pitch Dyer had warned me against.” Vincent et al., 85.

16 The National League used 23 players while the American League used 17, with Boudreau, Williams, DiMaggio, McQuinn, and Rosar playing the entire game. Arthur Daley noted that this was the only statistical category in which the senior circuit had the edge. Daley: 28.

17 Dawson, 28. But all major-league players benefited from the game as, for the first time, their pension fund was a beneficiary of the net receipts from the game. Those totaled $105,315. Vincent et. al., 85.

18 Donald Honig, The All-Star Game – A Pictorial History, 1933 to Present (St. Louis: The Sporting News, 1987), 66. It would get worse before it got better as the American League would also prevail in the next two All-Star Games, making it four straight, before the National League broke through in 1950.