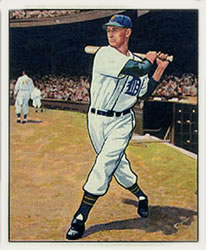 After the first week of September 1950, the Cleveland Indians were completing an 18-game road trip. Leading up to the final game away from home, they had gone an unimpressive 9-8. Manager Lou Boudreau’s team started on August 22 by winning five straight, but then they lost six in a row, dropping to fourth place in the American League.

Meanwhile, the Detroit Tigers were wrapping up a seven-game homestand at Briggs Stadium. The pennant-hungry Tigers under manager Red Rolfe had won five of the first six games and were just a half-game out of first place as they hosted the Indians in a Thursday afternoon contest.

The Indians put together three big run surges, but each time, the “Detroiters had to stage their sensational comeback of the year,”2 led by left fielder Hoot Evers.

For the home team, All-Star Art Houtteman had the initial mound duties. In search of his 18th win of the season, the big right-hander had a 2-2 record against the Tribe. Fellow All-Star Bob Feller made the start for the Indians.3 He was coming off a complete-game victory over the St. Louis Browns. He had faced Detroit three times to this point in the season, with two victories.

Neither starting pitcher made it out of the first inning. Houtteman allowed consecutive singles to Ray Boone, Bob Kennedy and Larry Doby (which drove in Boone and sent Kennedy to third) to start the game. Luke Easter’s groundout scored Kennedy. Al Rosen socked a home run, his 34th of the season. Joe Gordon reached on an infield error, and an out later, Jim Hegan singled to left, bringing up Feller. The hurler had collected only seven hits all season, but he connected on a Houtteman offering and sent it from the ballpark for a three-run home run. The Indians had batted around and scored seven runs. Rolfe called for right-hander Fred Hutchinson to relieve Houtteman.

Despite his big lead, Feller did not have much success, either. After retiring Don Kolloway to begin the bottom of the first, Feller gave up a single to center to Johnny Lipon, who scored on George Kell’s double. Vic Wertz drove Kell home with a single to right, and Wertz scored on Evers’ triple to deep center. After just five batters, Boudreau made a pitching change, replacing Feller with Jesse Flores.4 Johnny Groth grounded out to short, and Evers scored on the play, with the run charged to Feller. Jerry Priddy also grounded out, but Detroit had scored four runs.

Hutchinson and Flores tamed the opposing teams’ bats for two innings. In the bottom of the third, Kell doubled and Wertz walked to start the frame. Evers then doubled to left. Both baserunners scored, and suddenly Cleveland’s lead was only 7-6. Evers’ second hit of the game also knocked out the Indians’ second pitcher, as “Al Benton waddled in from the bullpen”5 to relieve Flores. Benton retired the next three batters, stranding Evers and preserving the one-run Cleveland advantage, until Priddy homered off Benton with two outs in the fifth and Detroit had tied the game.

In the top of the sixth inning, Cleveland plated three runs. Rosen doubled and Gordon hit a comebacker to the mound, which Hutchinson threw away. Rosen scored and Gordon advanced to third base on the error. Allie Clark’s RBI single brought in Gordon. Hegan laid down a sacrifice bunt, but Hutchinson misplayed it for his second error of the inning, and both Hegan and Clark were safe, with still nobody out. Hal White replaced Hutchinson and retired Benton and Kennedy but walked Boone. With the bases now loaded, Doby drew a free pass on a controversial checked swing, driving in the third Cleveland run of the inning. Tigers coach Dick Bartell was ejected by the home-plate umpire, Cal Hubbard, for arguing the call.

In the home half, Kolloway began the Tigers’ set of at-bats with a walk. Lipon reached on an error by third baseman Rosen and Kell forced Lipon at second. Wertz’s fly ball brought Kolloway home from third with an unearned run. Then, according to the Detroit Free Press, “it was Evers again, booming his second triple over Doby’s head to make it 10-9.”6 Benton walked Groth but retired Priddy to end the inning (and his time on the mound — Sam Zoldak came in to pitch the bottom of the seventh).

Cleveland loaded the bases with one down in the top of the seventh, and Bob Lemon, pinch-hitting for Benton, flied out to deep center. Rosen scored, making the score 11-9. In the home half of the eighth, Wertz was hit by a pitch before Evers tied the game for the second time by launching his 21st home run of the season. The game went into extra innings.

After Boone had reached on an error by Tigers third baseman Kell, Doby “boomed a two-run homer” off Hank Borowy in the 10th inning, making the score 13-11. It was Doby’s 22nd home run of the season.

However, according to a wire service wrapup in the Cincinnati Enquirer, “the Tigers were far from through as they teed off on Marino Pieretti,”7 the fifth Indians hurler of the game. Wertz singled to right and Evers singled to left for his fifth hit of the game. Groth walked and the bases were loaded for Priddy with no outs. Priddy grounded a ball back to Pieretti, who threw home for the force out. With the sacks still full, Joe Ginsberg lined out to center, but it was deep enough for Evers to tag and score. Charlie Keller pinch-hit for Borowy and singled up the middle, driving in Groth. The score was tied again! Pieretti retired Kolloway on a groundout, but before the Tigers could take the field, the game was called, “if not from darkness, from exhaustion.”8 The umpires determined there was not enough light to continue play, even though Briggs Stadium had lights.

The Tigers were “stalemated by rules,”9 as sportswriters tried to explain why the two teams were “left in the dark. Revised American League rules stated that the lights could be used to finish a game only when a team was playing its final series of the season in an opposing park.”10 It was the third tie game of the season for Detroit.

By banging out his extra-innings single, Evers had hit for the cycle, “with an extra triple tossed in for good measure.”11 He scored three runs and batted in six, raising his batting average to .332 and adding 21 points to his slugging percentage (.581). His two three-baggers gave him 10 for the season. (He added his league-leading 11th triple three days later.)

Twelve of Detroit’s 16 hits came from the second to fifth spots in the batting order. Teammate Kell contributed a 3-for-6 performance, including two doubles. He led the junior circuit in doubles in 1950 with 56.

The Tigers never led in the game, but at the end of the day found themselves in sole possession of first place in the American League.12 Manager Rolfe told reporters, “I’ve never seen a ball club show more courage than my Tigers did today.”13 The tie, coupled with a New York Yankees loss to the Boston Red Sox, “moved the Tigers in front by two percentage points in the torrid stretch battle”14 for the American League pennant.15 Detroit was hot at the right time of the season, and the Tigers won five of their next six games, before losing two of three to the Yankees, which dropped them back to second place. New York held on to win the pennant.

3 Both Houtteman and Feller appeared in the 1950 All-Star Game for the American League. Houtteman pitched three innings and is retroactively charged with a blown save, after allowing the tying run in the top of the ninth (a leadoff home run by Ralph Kiner). The game went into extra innings, and Feller made an appearance in the top of the 14th inning, retiring two of three batters he faced, after Ted Gray gave up a home run to Red Schoendienst that broke the tie and won the game for the National League.

4 Flores had come to the majors in 1942 and stayed until 1947. After spending time in the minor leagues (San Diego in the Pacific Coast League), Flores was obtained by the Indians “as part of a minor league working agreement.” (See baseball-reference.com/players/f/floreje01.shtml.) He pitched for the Indians in 1950 but then did not pitch in the majors again.

12 The New York Yankees lost to the Boston Red Sox, so the Tigers moved into first place, two percentage points ahead of the Yankees.