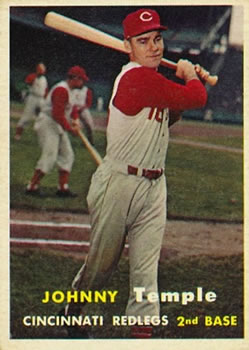 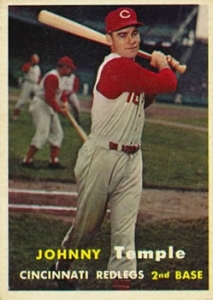 The Pittsburgh Pirates’ 3-2 win over the Cincinnati Redlegs in 11 innings on June 21, 1957, at Crosley Field was a good game, its outcome in doubt until the final pitch, but one of its most notable events took place after the final out.

“Temple’s ‘Hit’ Costs Him $100,” the Cincinnati Post’s page one story read. In the Redlegs’ clubhouse after the game, second baseman Johnny Temple had punched Post beat writer Earl Lawson, who, while serving as the game’s official scorer, had charged Temple with an error on a pivotal play in the ninth inning.

It was the fifth game of a 15-game homestand for Cincinnati, and the opener of a four-game series between the Redlegs, who were in third place in the National League with a 34-27 record, and the Pirates, who were in seventh at 23-38.

Pittsburgh, however, had swept a four-game series from Cincinnati at Forbes Field a week earlier, including two walk-off wins. For the first game of the rematch, the Pirates sent Bob Friend to the mound against the Redlegs’ Joe Nuxhall.

The Pirates scored first against Nuxhall, whose 15 seasons in Cincinnati included a 27-14 record in 66 appearances against Pittsburgh. With two on and two out in the second inning, Hank Foiles drove in Bill Mazeroski with a bloop single inside the right-field line. Bill Virdon also tried scoring on the play but was thrown out at home plate.

Like Nuxhall for the Pirates, Friend was a familiar foe for the Redlegs. He faced Cincinnati 81 times during his 16-season career, finishing with a 24-35 record. Friend held the Redlegs scoreless through four innings. But Cincinnati went ahead in its half of the fifth on Wally Post’s home run to deep left field with Frank Robinson on base.

According to Pirates manager Bobby Bragan, Friend “made one bad pitch all night and it almost beat us. It was a curve that broke high, which is to say it hung there in front of Post’s eyes.”1

Cincinnati threatened to expand its lead in the seventh, loading the bases with one out. But relief pitcher Luis Arroyo retired Bob Thurman and Nuxhall to end the inning.

Nuxhall preserved the one-run advantage through eight innings, stranding Pirates in scoring position in the seventh and eighth, and the 28-year-old left-hander returned to the mound in the ninth with the Redlegs leading 2-1. Dick Groat opened the inning with a single. Virdon sacrificed pinch-runner Johnny O’Brien to second.

Foiles followed with a hard grounder that Temple could not handle. The play was scored an error, and O’Brien advanced to third.

With runners on the corners and one out, the Pirates sent up Jim Pendleton to bat for Arroyo. Nuxhall uncorked a wild pitch, and O’Brien scored the tying run.

After the pitch, Redlegs manager Fred Hutchinson pulled Nuxhall in favor of Hersh Freeman. Paul Smith batted for Pendleton and walked. The Pirates looked to take the lead, but Roberto Clemente – struggling with back problems and batting under .261 after hitting .311 in his breakout 1956 season – hit a line drive back to the mound. Freeman caught it and threw to first for an inning-ending double play.

The game became a battle of the bullpens. Nellie King and Red Swanson held the Redlegs scoreless in the ninth and 10th. Freeman set the Pirates down in order in the 10th.

Mazeroski led off the 11th inning with a single off reliever Hal Jeffcoat. He moved to second on Buddy Pritchard’s sacrifice and scored the go-ahead run on Foiles’ line single to left center, the Pittsburgh catcher’s third hit of the night.

Cincinnati had one last shot in its half of the 11th. Robinson opened the frame with a single off Swanson. It was the 21-year-old Robinson’s fifth hit of the game;2 the 1956 NL Rookie of the Year had been celebrated in a pregame ceremony with a “night” in his honor.3 Ed Bailey followed with a single, sending Robinson to third and Swanson to the bench.

Pittsburgh brought in Bob Purkey, a 27-year-old right-hander in his fourth season as a swingman with his hometown Pirates. Five months later, he was traded to Cincinnati, where he emerged as a rotation stalwart for seven seasons, winning 103 games and making three All-Star teams.

Here, Purkey induced a comebacker off Post’s bat. Robinson broke for home but was trapped in a rundown, then tagged out by Foiles. On the play, Bailey advanced to third and Post to second; the Redlegs now had two runners in scoring position with one out.

Cincinnati had reached the eighth spot of its order, but Hutchinson had some tough bats on his bench. Smoky Burgess, one of the best pinch-hitters of the 1950s and 1960s, batted for shortstop Alex Grammas. The Pirates intentionally walked Burgess – three seasons later a key member of their 1960 World Series-winning team – to load the bases, with the pitcher’s spot due.

Ted Kluszewski, hindered by a disc problem in 1957 after bashing 171 home runs in the previous four seasons, had pinch-hit for Freeman in the 10th inning. He moved to first base in the top of the 11th. Kluszewski grounded to Gene Baker at third, who threw home for the force on Bailey.

With two out, the bases still loaded, and the game on the line, Temple faced Purkey. The count went full. The next pitch bored in on Temple. He tried getting out of the way, but the ball nicked his bat and went foul.

On the next pitch, Temple grounded to third. Baker’s throw nipped him on a close play at first for the final out. Temple drop-kicked his helmet toward the dugout. Purkey got the win, Jeffcoat took the loss.

As the crowd of 19,648 exited Crosley Field, Temple’s frustration was coming to a head in the home clubhouse. Earlier in the month, on June 1, Temple had criticized an official scorer’s decision that he had reached base on an error, instead of crediting him with a bunt single.4 After that game, Temple accused the scorer of “taking bread and butter from my mouth.”5

In this game, less than three weeks later, Lawson had charged Temple with an error on Foiles’ grounder during Pittsburgh’s ninth-inning rally. Temple then made the game’s final out with the bases loaded.

After the game Temple heaped obscenities upon me.

“John,” I yelled at him from across the clubhouse, “why don’t you grow up?”

Temple then charged toward me. Sticking his face almost against mine, he said, “What did you say?”

I repeated my statement about his growing up.

My words were hardly uttered when Temple landed a right to the left side of my face that sent me reeling. I’d heard about seeing stars. I learned that it’s true. Once regaining my balance, I lunged at Temple my arms flailing. Other Reds players pulled us apart.6

Lawson suffered an eye injury. He believed it was Temple’s final at-bat that caused the second baseman to lose his cool. “What really rankled him was that he had grounded out with the bases loaded to end the game,” Lawson said.7 National League President Warren Giles fined Temple $100.

After the incident, Temple was contrite. “I feel terrible about it. I had no control over myself. I didn’t know what I was doing. Earl is the best friend I have in Cincinnati. I want to see him and apologize. … I hope Earl will accept my apology.”8

It was not the first fight for the competitive, fiery Temple – nor would it be the last. Temple led or tied for the NL lead in ejections three times in his 13-season major-league career. In these respects, he was similar to his contemporary, the scrappy Billy Martin. (As it happened, when Cincinnati traded Temple to the Cleveland Indians after the 1959 season, it was for a package of players that included Martin.)

Temple spent the first eight seasons of his career in Cincinnati, making three All-Star teams and earning MVP votes in two seasons. After stints in Cleveland (he also made the All-Star team in 1961), Baltimore, and Houston, he returned to Cincinnati in 1964 as a coach and occasional player. On the day he was fired, in August 1964, Temple got into one last fight, this time with fellow Reds coach Reggie Otero.

This article was fact-checked by Larry DeFillipo and copy-edited by Len Levin.

In addition to the sources cited in the Notes, the author consulted Baseball-Reference.com and Retrosheet.org for pertinent information, including the box score and play-by-play. He also relied on Bob Trostler’s SABR BioProject biography of Johnny Temple.

2 This game was the first of three during Robinson’s storied career in which he collected five hits.

4 Temple reached base seven times in that game. He went 4-for-5 with two walks. He also reached base on an error.