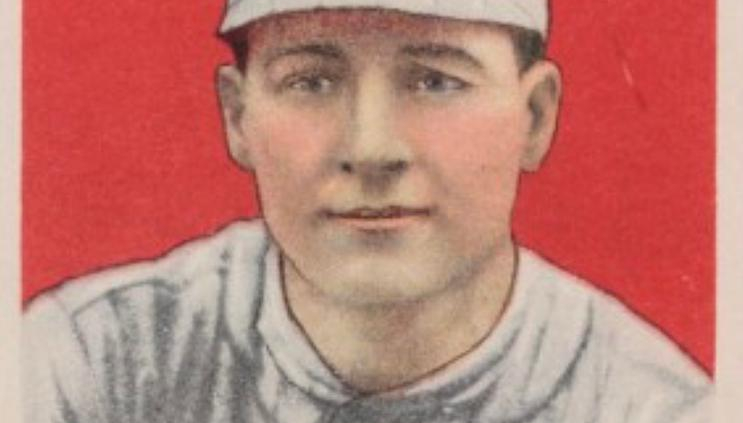 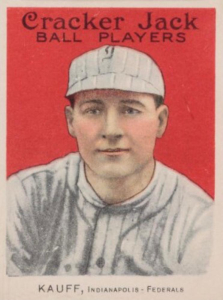 On June 11, 1914, the Federal League’s Indianapolis Hoosiers swept a doubleheader from the Baltimore Terrapins and began a winning streak that propelled the team from seventh place to first. The string reached 15 wins on June 24 when star outfielder Benny Kauff and rookie pitcher George Kaiserling sparked Indianapolis past the Kansas City Packers, 5-2.1

The Hoosiers started the season slowly, completing April’s schedule at 7-6. In May, Indianapolis won just eight of 20 games, and it ended the month at the bottom of the eight-team league. The Hoosiers escaped the cellar early in June, and carried a 19-23 record when they began the winning streak. Now, with 14 consecutive wins – all at home – the first-place Hoosiers entertained the sixth-place Packers at Federal League Park in the first game of a five-game set.

The teams had already met five times, with four of those contests going the Hoosiers’ way. Nevertheless, before the game Packers manager George Stovall told the Kansas City Star, “Indianapolis is about due to get a good licking and if our pitchers show form we will pull the Hoosiers out of first place and wreck them the same way we did Baltimore recently in Kansas City.”2

Indianapolis manager Bill Phillips was counting on Kaiserling to spoil Stovall’s prediction, and extend the streak. Kaiserling had thrown a complete-game win over Kansas City on April 20 in his major-league debut, but he pitched sparingly the rest of April and May. Phillips plugged Kaiserling into the starting rotation in June, and the 6-foot right-hander provided three of the Hoosiers’ 14 wins during the streak, bringing his record to 4-1.

Kansas City opened the series with left-handed Nick Cullop on the mound. He began 1914 with the American League’s Cleveland Naps before joining Kansas City in May. Cullop had gone 6-4 with the Packers. One of those losses was inflicted by the Hoosiers in an error-filled game on May 10.

Kaiserling’s first inning was not sharp. Chet Chadbourne hit a ball hard, but right to Vin Campbell in center field for the first out. Grover Gilmore followed with a single and took second on a groundout to first. Ted Easterly cracked a two-out single, scoring Gilmore, and giving Kansas City the early edge.

The Packers could not hold the lead. Campbell walked to begin the Hoosiers’ half of the first, and Bill McKechnie – who later managed Pittsburgh (1925) and Cincinnati (1940) to World Series championships – singled into right to put runners on first and second. Kauff bunted too hard, tapping the ball back to Cullop, who forced Campbell at third.

With Frank LaPorte at the plate, McKechnie and Kauff executed a double steal. Catcher Easterly made a low peg to third, and the ball skipped all the way to the fence. It was the only error of the game, and was costly, allowing McKechnie to tie the game and Kauff to scamper to third. LaPorte singled Kauff home, putting the Hoosiers on top, 2-1.

Cullop surrendered two more runs in the second. He struck out Bill Rariden to start the inning, but Kaiserling ignited the offense with a double. Campbell singled Kaiserling home with the Hoosiers’ third run, and McKechnie walked, putting Hoosiers on first and second.

Indianapolis stayed aggressive, trying another double steal. This time Easterly’s throw to third was on target; Campbell was tagged out as McKechnie made it to second base. Kauff kept the rally going by beating out a grounder, and McKechnie raced to third.

With runners at the corners, the Hoosiers pulled off another double steal; McKechnie stole home and Kauff stole second. Indianapolis had used speed and daring to turn a one-run deficit into a 4-1 lead.

Kaiserling blanked Kansas City from the second inning through the seventh. He was unusually efficient in the third and fourth, when he needed just seven pitches to post six outs. In the third, two grounders and a fly ended the inning after three pitches, and Kaiserling nearly duplicated that feat in the fourth. Easterly hit Kaiserling’s first pitch for an out, as did George Perring; Art Kruger let a pitch go by for strike one before grounding the second pitch to shortstop Jimmy Esmond, who fired to first baseman Charlie Carr for the out.

Indianapolis added its final run in an eventful fourth inning. Kaiserling again started the rally, this time by walking. Campbell followed with a grounder that Cullop fielded and fired to second. Shortstop Pep Goodwin momentarily bobbled Cullop’s throw – just enough for Kaiserling to be called safe.

With McKechnie at the plate and two runners aboard, Easterly took his position behind the plate, but began arguing with home-plate umpire Ollie Anderson, presumably about the call at second. Cullop threw a pitch that eluded the distracted Easterly, allowing Kaiserling to advance to third and Campbell to second.

Umpire Anderson immediately declared “no play,” and sent both runners back to their original bases. That did not appease Easterly, who continued to argue until he was ejected. Stovall came to his catcher’s defense, and he was threatened with expulsion before things settled down.

Catcher Jack Enzenroth, a former University of Michigan star, replaced Easterly. Enzenroth played three games with the St. Louis Browns in 1914 before signing with Kansas City. This was his fourth game as a Packer.

Additionally, Stovall removed Cullop, summoning Dwight Stone, who was making his 19th appearance – 10th in relief – for the Packers. Stone carried a 2-5 won-lost mark, along with a 4.58 earned-run average. In 1913 he had pitched for the Browns – also managed by Stovall.

With Kansas City’s new battery in place, McKechnie stepped to the plate to face the right-handed Stone. McKechnie hit a grounder that forced Campbell at second and sent Kaiserling to third. Kauff followed with a double to the scoreboard, bringing Kaiserling home with his second run and the Hoosiers’ fifth. McKechnie might have scored, too, but he tripped rounding second, and stopped at third.

The Packers lost a run in the fifth through poor baserunning. With Goodwin on third, Stovall on first, and two out, Kansas City tried a double steal. Rariden threw very high toward second base; Esmond jumped, caught the ball, and put the tag on Stovall “a fraction of a second”3 before Goodwin reached home plate. The Indianapolis Star commented that Goodwin dawdled in from third, which kept him from reaching home plate before Stovall was tagged for the third out.

Indianapolis maintained its 5-1 edge until the eighth, when Chadbourne and Gilmore opened the frame with consecutive singles. Chadbourne tagged up on Duke Kenworthy’s fly ball, and raced from second to third; he scored Kansas City’s second run on a fielder’s choice.

The Packers threatened in the ninth, but did not score. Kruger beat out a grounder to third to start the inning, and when Goodwin lofted a fly to right that Kauff misjudged into a double, Kansas City had runners on second and third with no one out. But as Ralston Goss of the Indianapolis Star noted of Kaiserling, “The big fellow was strong in the pinches, especially in the ninth.”4 Kaiserling retired Stovall on an easy grounder to McKechnie, struck out pinch-hitter Cad Coles, and ended the game by getting Chadbourne to ground out.

Kaiserling was not spectacular in this complete-game victory; he yielded 11 hits. But he threw effectively and received good defensive support. His curveball was breaking well,5 leading to four strikeouts without any walks. Kaiserling pocketed his fifth win, and ended the year 17-10.

The next day, Kansas City did give Indianapolis that licking Stovall had promised, beating the Hoosiers 5-3, to end the streak at 15. Indianapolis rebounded to win the third game of the series, and the teams split a doubleheader on June 28. The Packers had not knocked Indianapolis from first as Stovall predicted; Indianapolis clung to a half-game lead over the second-place Chicago Chi-Feds.

Indianapolis won the 1914 Federal League pennant, but it took two more hot streaks to accomplish the task. After dropping to fourth place, the Hoosiers went 13-2 from August 12 to 26 to regain first place. Later, the second-place Hoosiers won eight straight from September 30 to October 8 (another game ended in a tie) to pass Chicago, and capture the flag.

The Indianapolis team did not survive to defend its crown.6 In March 1915, after much legal wrangling, the franchise was transferred to Newark, New Jersey.

Kaiserling followed the team to Newark and compiled a 15-15 record with a 2.24 ERA. He spent 1916 pitching for Toledo of the American Association, before contracting tuberculosis. Kaiserling was unable to play in 1917, and died in 1918 at age 24.

In addition to the sources cited in the Notes, the author consulted Baseball-Reference.com and Retrosheet.org for pertinent information, including the box score. The author also relied on game coverage in the Indianapolis News and Indianapolis Star and SABR BioProject biographies for several players involved in the game.

1 The author’s research has determined the Hoosiers’15-game winning streak to be the longest string of victories in the brief history of the Federal League. The St. Louis Terriers won 12 in a row from June 12 to 23, 1915; the Brooklyn Tip-Tops won 10 straight from September 3 to 11, 1915.

6 Indianapolis also won the 1913 Federal League pennant when the league was a six-team unaffiliated minor league.