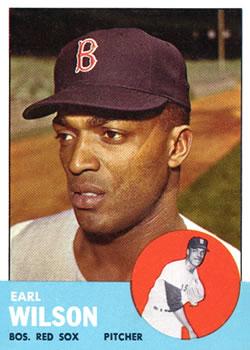 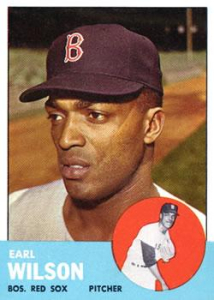 On June 26, 1962, Earl Wilson of the Boston Red Sox became the first Black pitcher to throw a no-hitter in the American League, and his third-inning home run provided the game-winning run in Boston’s 2-0 win over the Los Angeles Angels.

Wilson was the first Black ballplayer to sign with the Red Sox—in 1953—but his path through the minor leagues was interrupted by a stretch in the US Marine Corps from July 1957 into 1959. Back on the field in 1959, Wilson built up a record of 10-2 with the Triple-A Minneapolis Millers and joined the Red Sox on July 28.

He threw a hitless inning of relief against the Cleveland Indians that day, a week after his Millers teammate Pumpsie Green had been the first Black player to debut for Boston on June 21, 1959, making the Red Sox the last team to integrate in the formerly segregated major leagues.

On Tuesday night, June 26, the Angels, in their second season as an expansion club, were at Fenway Park. They were 38-31, in fourth place but only 2½ games out of first in the 10-team American League. The 32-38 Red Sox were eighth, nine games out.

Boston manager Pinky Higgins—who had once reportedly declared, “There’ll be no n—–s on this ball club as long as I have anything to say about it”1—started Wilson against rookie left-hander Bo Belinsky of the Bill Rigney-managed Angels.

The 25-year-old Belinsky had a record similar to Wilson’s (7-2, 3.89). He had a no-hitter to his credit himself, thrown just the month before on May 5 against the Baltimore Orioles. On May 20 at Dodger Stadium, Belinsky had blanked the Red Sox, 1-0, on a two-hitter.

Harry Schwarts, the plate umpire for Belinsky’s no-hitter, was also behind the plate for this game.

With a crowd of 14,002 on hand, Wilson retired the Angels in order in the top of the first on a groundout to first base unassisted, a fly ball to right, and a strikeout. Belinsky saw the leadoff batter fly out to left, then struck out the next two.

Wilson walked first baseman Lee Thomas leading off the second, but then got three groundouts. Belinsky also granted a leadoff walk, but a foul popup and two more strikeouts followed.

With a groundout, a strikeout of Belinsky, and a lineout, Wilson got through the third. In the bottom of the inning, Belinsky struck out shortstop Eddie Bressoud, bringing up Wilson. A powerful hitter whose 35 total major-league home runs included two seven-homer seasons, Wilson took Belinsky deep with a home run, as the Associated Press reported, “high into the left center field screen.”2 It was Wilson’s second homer of 1962, and the Red Sox led, 1-0.3

The Angels went three up, three down in the fourth. Wilson struck out second baseman Billy Moran, then saw two fly balls hit for outs.

With one out in the top of the fifth, Wilson issued back-to-back walks to left fielder Earl Averill and third baseman Eddie Yost, who had led the league in walks six times in his career. Koppe hit a ball to deep left but it was caught “almost against the fence” by 22-year-old Carl Yastrzemski.5 Belinsky flied out to center.

After Belinsky set down the Red Sox in order in the bottom of the fifth, Wilson walked another batter, Moran, in the sixth, in between a couple of fly balls and a groundout to first, taken unassisted by Runnels. That groundout was the “closest call”—the defensive play of the game, according to Wilson. As United Press International wrote, “Runnels took three steps to his right and scooped up the hard drive and made an unassisted putout.”6

Belinsky walked Runnels in the sixth but had no further difficulty.

After the game, Wilson said he was well aware of the no-hitter as it was in progress. “Everybody on the bench knew I had a no hitter. They all tried to act kind of nonchalant, not letting me know I had one.”7 It was no secret to the fans; according to the Quincy, Massachusetts, Patriot Ledger, “from about the sixth inning on, the crowd cheered Wilson’s every move. As each Angel went out, the cheers became louder and longer, with tension mounting on each pitch.”8

It was a relatively easy seventh for Wilson, with a 4-3 groundout and two K’s. Belinsky got a fly ball and struck out two.

Leading off the eighth, Koppe popped up foul to third baseman Malzone, who made the catch while leaning into the Angels dugout, then “tumbled into the arms of Los Angeles players.”9 Rigney had Tom Burgess pinch-hit for Belinsky; Burgess flied out to right. Albie Pearson—on his way to leading the AL in runs scored and finishing in the Top 10 in walks—fouled out to catcher Bob Tillman.

Dean Chance was the new Angels pitcher in the eighth. The 21-year-old righty got infield groundouts from center fielder Gary Geiger and Yastrzemski. The Red Sox threatened to add another run when Malzone reached on a bunt single and took third on Runnels’ single to right, but Tillman struck out looking to end the inning.

Top of the ninth. The three batters due up were Moran, right fielder Leon Wagner, and Thomas. Moran hit a ball that looked as if it might drop in for a Texas Leaguer in short left, but shortstop Bressoud raced out and caught it for the first out.

There were two outs after Yastrzemski hauled in Wagner’s fly ball to medium left-center. Wilson got ahead 1-and-2 on Thomas, who hit a drive to center.10

Geiger caught it on the warning track, “about five feet short of the wall.”11

Earl Wilson had his no-hitter. Only one other Black pitcher, Sam Jones of the Chicago Cubs on May 12, 1955, had thrown a no-hitter in the formerly segregated major leagues.

Wilson had retired 14 batters on fly balls and eight on groundouts, overcoming four walks and striking out five. He outdueled Belinsky, who allowed only two hits and fanned 10 Red Sox.

Wilson was, of course, thrilled. “That’s the greatest thing that ever happened to me. … It was wonderful I feel great. I can’t believe it. … All I can say is The Good Man was with me tonight.”12

Red Sox owner Tom Yawkey made a visit to the Red Sox clubhouse and let Wilson knew he was getting a new contract with a $1,000 raise. The last time Yawkey had come to the clubhouse after a game might have been after Mel Parnell’s 1956 no-hitter. He said he’d been thrilled by Parnell’s but was more so by Wilson’s because while Parnell was an established veteran, Wilson was relatively young, just starting out.13

“I just threw as hard as I could, all the way,” Wilson said. “I stayed with my fast ball all the way but mixed in a few sliders.”14 Posing for photographs afterward, Wilson added, “I guess I’m not dreaming, but I still can’t believe it.”15

Wilson finished 1962 with a 12-8 record and a 3.90 earned-run average. His SABR biographer Don Hyslop says, Wilson’s next few seasons saw his won-lost record “reflect the overall ineptitude of the Red Sox,” who finished eighth in the AL in 1962 and did not have a winning season until the “Impossible Dream” pennant of 1967.

3 Wilson finished 1962 with three homers, hitting a three-run homer in Minnesota in the second game of an August 17 doubleheader.