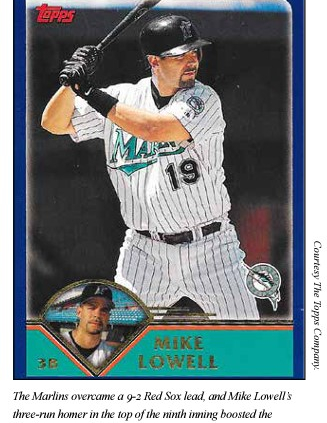 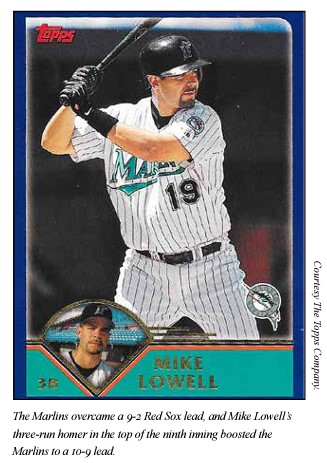 This was a battle between two ballclubs that both played deep into the postseason in 2003. In June the Florida Marlins faced the Boston Red Sox for three interleague games. The Marlins were in fourth place in the NL East, already 12 games behind the Atlanta Braves. The Red Sox were second in the AL East, two games behind the New York Yankees.

After the year had fully played out, the Red Sox had been edged by the Yankees in an 11-inning Game Seven of the American League Championship Series. The Marlins won the 2003 World Series against the Yankees, taking the Series in six games.

In the three games in late June, the Red Sox outscored the Marlins, 45-25. The first of the three-game set at Boston’s Fenway Park was a 25-8 blowout on Friday night, June 27, kicked off by a 14-run bottom of the first inning – 10 of the Red Sox runs scoring  before the Marlins had even recorded the first out.

The Marlins were looking for some sort of redemption the next night, and they found it.

The matchup for the Saturday night game featured knuckleballer Tim Wakefield pitching for the Red Sox and left-hander Tommy Phelps going for the Marlins.

Marlins leadoff hitter Juan Pierre beat out a bunt. While Luis Castillo was batting, Pierre stole second base and then stole third. Castillo struck out, but Marlins catcher Iván Rodríguez hit into a 6-3 groundout that enabled Pierre to score easily from third. The Marlins’ Lowell, playing as the designated hitter in the American League ballpark, flied out to center.

In the top of the second the Marlins added a run. Juan Encarnación singled to left field, stole second, moved to third on Derrek Lee’s single to right field, and scored when Miguel Cabrera hit into a 5-4-3 double play. The Red Sox did little against Phelps and the score after two innings was 2-0, Marlins.

In the bottom of the fourth, the Red Sox tied the score when Bill Mueller drew a walk off Phelps and shortstop Nomar Garciaparra hit a two-run home run to deep left field.

The score remained 2-2 until the bottom of the sixth, when the Red Sox took advantage of a tiring Phelps, who had thrown close to 100 pitches. Gabe Kapler, making his Red Sox debut after his contract was purchased from the Colorado Rockies, drove in Kevin Millar from first with a triple to right field. Freddy Sanchez laid down a squeeze bunt to the pitcher, reaching safely and scoring Kapler. Johnny Damon singled to right, and Garciaparra drove in both runners with a double to center field, giving the Red Sox a 4-2 lead. That was it for Phelps; he ended the day with 112 pitches in 5⅔ innings.

Things got no better for Phelps’s replacement, right-hander Nate Bump, who was making his big-league debut. He gave up a single to Manny Ramirez, walked David Ortiz, and hit Millar with a pitch. With the bases loaded, Kapler doubled to left field, driving in two runs. Millar, running from first base, rounded third, reversed course and scampered back to the bag but was tagged out. The Red Sox had scored seven runs on seven hits, led, 9-2, and the Marlins faced a big uphill climb.

In the eighth inning, with Tim Wakefield still on the mound for the Red Sox, the first three batters, Pierre, Castillo, and Rodríguez got hits; Rodríguez’s infield hit to second drove Pierre home. After an out, Encarnación hit a home run to deep left field, driving Wakefield from the game after 93 pitches in 7⅓ innings. Mike Timlin retired the side, and the Marlins trailed, 9-6.

After Nate Bump retired the Red Sox in the eighth, Red Sox right-hander Brandon Lyon entered the game in search of his 10th save of the season. He had a 3.07 ERA coming into the game. Brian Banks and Pierre singled with one out, and when Castillo hit into a force play, the Marlins were down to their last out. Ivan Rodríguez staved off defeat when he punched a single to center field, scoring Banks.

Lyon got two strikes on the next batter, Mike Lowell. Lowell then launched a three-run home run into the Red Sox bullpen in deep right field, and the Marlins led, 10-9. It was his 25th home run of the season, leading the National League. The 3-4-5 batters in the Marlins order (Rodriguez, Lowell, and Encarnacion) now each had three RBIs. The Marlins had scored four in the eighth and four in the ninth.

The Red Sox had one last chance but couldn’t capitalize. Batting against Braden Looper with one out, catcher Jason Varitek doubled off the wall in left-center field, but became the final out of the game when Johnny Damon lined out to center fielder Pierre, whose throw to shortstop Alex Gonzalez doubled up Varitek before he could get back to second base. Varitek admitted afterward that he had misread the ball and thought it was going to drop.1

The Marlins had overcome “the largest deficit for a victory in franchise history.”2

Nate Bump recorded the win in his major-league debut.

The Marlins win shifted the spotlight from Gabe Kapler, who had been 4-for-5 with a triple, two doubles, and three runs batted in for his Red Sox debut.

Red Sox manager Grady Little said of Lyon, “It caught up to him tonight. The kid’s been nearly perfect for us all season long and tonight it caught up to him. He’s a human being, too, and that happens.”3

After the game Florida manager Jack McKeon, who complained the night before about Boston’s 25-8 win, said, “We were embarrassed last night,” and went on to say “they woke us up” and “this takes a little of the taste out of our mouths.”4

After the season had fully played out, the Red Sox had been edged by the Yankees in an 11-inning Game Seven of the American League Championship Series. The Marlins won the 2003 World Series against the Yankees in six games.

In addition to the sources cited in the Notes, the author consulted Retrosheet.org, Baseball-Reference.com, and SABR.org.