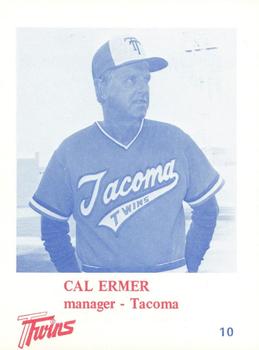 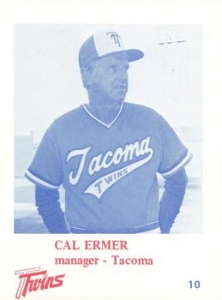 If the 1975 Tacoma Twins had been as good at winning baseball games as manager Cal Ermer was at winning protests, they would have gone undefeated.

The Twins’ June 8 loss to the Hawaii Islanders, their top rivals in the Triple-A Pacific Coast League’s Western Division, was temporarily put on hold after Ermer mounted a successful protest against the original outcome. A few days later, the teams replayed the ending of the game. The Twins lost again – but Ermer filed another successful protest, forcing a second replay.1 On August 3, the Twins and Islanders finished the game without additional controversy, as Hawaii finally nailed down the victory it had claimed twice before.2

Ermer’s Twins and Roy Hartsfield’s Islanders were the class of their division when they faced off in front of 2,419 fans at Tacoma’s Cheney Stadium. Hawaii led the division with a 35-20 record while Tacoma stood in second place, four games back, at 30-23.3 Hawaii was the San Diego Padres’ top minor-league affiliate. Tacoma, as its name would suggest, was a Minnesota Twins farm team. Manager Ermer had skippered the parent club in 1967 and 1968, and Tacoma first baseman-outfielder Tom Kelly later managed Minnesota to World Series wins in 1987 and 1991.4

Twenty-seven Islanders – the team’s entire 1975 roster, with two exceptions – played in the major leagues at some point.5 Gene Locklear, Hawaii’s starting left fielder on June 8, learned before the game that he was being called up to San Diego to replace the injured Johnny Grubb on the Padres’ roster.6 He played anyway, collecting two hits before departing.

Other noteworthy Hawaii starters included former 1969 “Miracle Met” Rod Gaspar in center field7 and 1974 first-round draft pick Bill Almon at shortstop. But the Islander most central to the game’s twists and turns was the starting pitcher, right-hander Gary Ross. A Pennsylvanian in his ninth professional season, Ross had made 234 major-league appearances and was trying to work his way back up. In 27 starts for the 1975 Islanders, Ross ranked as one of the league’s best starting pitchers, compiling a league-leading 16 wins8 and a 2.49 ERA.

Twenty members of Ermer’s Tacoma team appeared in the major leagues, and he started seven of them, including center fielder Lyman Bostock, right fielder Mike Poepping, first baseman Randy Bass, shortstop Dave McKay, catcher Tom Lundstedt, and designated hitter Bob Gorinski. The start went to righty Steve Luebber, a 13th-round draft pick of Minnesota in 1967. Luebber was also trying to return to the big leagues, having pitched in 20 games for the Twins in 1971 and 1972.9 Luebber’s performance in 1975 was just about as good as Ross’s, as he compiled a 14-7 record and a 2.39 ERA.

The two-man umpiring crew of Bill Lawson and Eric Gregg also deserves mention, as they played a major role in the game’s outcome. Lawson had been a professional umpire since 1969, working in the Pacific Coast League from 1974 through 1980. He was never summoned to the big leagues full-time, but worked 27 National League games in April and May 1979 during an umpires strike. Gregg began as an Eastern League ump in 1973, earning a promotion to the Pacific Coast League the following season. Gregg worked a handful of late-season NL games in 1976 and stayed in the majors through 1999, umpiring in the 1986 All-Star Game, 1989 World Series, two Division Series and four League Championship Series.

The Twins grabbed a first-inning lead thanks mainly to Bostock, who had appeared in 10 games for Minnesota in April 1975 and returned to the majors later in June. Bostock hit a leadoff single to center field, stole second base, and moved to third on catcher Bob Davis’s wild throw. An infield single by third baseman Bill Ralston scored him.10 Hawaii responded with a run in the second on a double to left field by designated hitter Jim Fairey, a slow roller by Davis that went for a hit, and a single to right field by first baseman Marv Galliher.11

Luebber yielded two more runs to Hawaii in the fifth. Galliher walked and third baseman Carmen Fanzone reached on an error by McKay. Gaspar singled in the first run with a hit to right field. After a walk loaded the bases, a wild pitch by Luebber brought in Fanzone to make the score 3-1, Hawaii.12 The Islanders picked up a fourth run in the seventh on another walk to Galliher, a sacrifice by Almon, and a second RBI single by Gaspar. McKay hit a solo homer in the ninth off Hawaii reliever Chuck Hartenstein for a 4-2 final score, achieved in 2 hours and 20 minutes. It was the Islanders’ 13th win in 14 games – or so it seemed at the time.13

Ermer’s knowledge of the rule book bought his team a second chance to win. During a lengthy argument in the eighth inning that almost led to his ejection, he accused Ross of having an illegal substance smeared on his cap.14 Ermer and Lawson checked Ross and found pine tar on his cap.15 Lawson forced the pitcher to change hats but allowed him to stay in the game.16 Ermer protested, saying league rules required that a pitcher be ejected in those circumstances. League President Roy Jackson agreed and ordered that the game be replayed starting in the eighth inning, without Ross, on June 11.17 This decision nullified McKay’s ninth-inning homer and reset the score to 4-1.

The Islanders and Twins replayed the end of the game that day before a regularly scheduled matchup, with Lawson and Gregg again the arbiters. Hawaii took the field with an altered lineup to accommodate Locklear’s call-up, Ross’s ejection, and an injury to Fanzone.18 After Hawaii’s leadoff hitter, Sonny Jackson, reached base to start the ninth, Ermer took the field to announce another protest. He claimed the Islanders were batting out of order and Galliher should have led off. Lawson and Gregg allowed the game to continue with Jackson at first.19 The Islanders did not score in their half of the ninth. Tacoma bunched four hits and a hit batsman in the bottom half to add two runs, but Hartenstein again shut the door for a 4-3 Hawaii victory.20

Ermer’s protest kept the game in limbo until June 27, when PCL President Jackson again ruled in his favor. This time, Jackson called for the ninth inning of the game to be replayed during the Islanders’ next trip to Tacoma, in early August, with Hawaii holding a 4-1 lead.21 Not surprisingly, Hartsfield was furious. Noting that Jackson oversaw the PCL from an office in distant Paoli, Pennsylvania, the Hawaii manager questioned how Jackson could overturn the calls of umpires on the field: “I don’t see how a man 3,000 miles away can be so smart while his umpires on the scene can be so dumb.”22

Lawson and Gregg blamed people in the press box – presumably including the official scorer – for not telling them the Islanders were batting out of order, although it was the umps’ responsibility to maintain a current lineup for each team.23 Gregg went so far as to suggest the press-box staff had deliberately withheld the information, sparking an angry reply from Tacoma general manager Stan Naccarato.24

The game was once again resumed on August 3 with one out in the top of the ninth. Almon grounded out and Jackson, hitting in his correct spot, drew a walk but was thrown out trying to steal. The indefatigable Hartenstein made his third attempt to nail down the game in the bottom half. This time he pitched a one-two-three inning, retiring Bass, McKay, and substitute right fielder Kelly. With no further protests forthcoming from Ermer, the Islanders’ victory was allowed to stand.25

Ross finally earned the win, while Luebber took the loss. Coincidentally, the regularly scheduled Twins-Islanders game on August 3 again matched the two pitching aces against each other. This time, Luebber threw a five-hitter to beat Ross as Tacoma claimed a 1-0 win.26 Game stories do not name the umpires who worked the August 3 conclusion, as well as the regularly scheduled game.

At year’s end, Hawaii romped to the division title with an 88-56 record, 14 games ahead of Tacoma. The Islanders then defeated the Salt Lake City Gulls, a California Angels farm club, for the league championship. Two years later, Hartsfield was named the first manager of the expansion Toronto Blue Jays. The players on his first-year roster included McKay and Hartenstein, who made his first major-league appearances since 1970.

Ross’s 1975 season ended in the major leagues, but not on a triumphant note. On September 17 the Padres traded him to the Angels. He was called up to California in time to make a single start, against Oakland on September 28, the final day of the regular season. Ross worked five innings and took the loss as a quartet of A’s pitchers combined to pitch a 5-0 no-hitter.

Neither Baseball-Reference nor Retrosheet provides box scores of minor-league games, but the August 4, 1975, editions of the Honolulu Advertiser and Honolulu Star-Bulletin published a box score for the (finally) completed game.

The author thanks Stew Thornley for research assistance and suggestions during his fact-check of this article.

4 Kelly did not start the game on June 8, or appear in its first replay on June 11, because he was in the big leagues with the Twins at the time. His final big-league appearance was July 11 and he was in Triple A for the final replay on August 3.

7 Gaspar’s major-league career had already ended, though he didn’t know it at the time. His 33 appearances with the 1974 Padres were the last of his four-season big-league career.

16 Hartsfield reportedly filed his own protest on June 8. He claimed Ermer had grabbed Ross’s cap off his head, while only umpires were allowed to inspect players’ uniforms. See “Ermer Protests Trail of Lonesome Pine Tar” and “Ross in Sticky Situation,” Honolulu Advertiser, June 10, 1975: D1. If Hartsfield’s protest was granted, it did not prevent the replaying of the game’s conclusion on June 11, nor did it forestall Ermer’s participation in that replay.

22 “Islanders Lose Another Protest.” Paoli is on the outskirts of Philadelphia, not far from such landmarks as Villanova University, King of Prussia, and Valley Forge National Historical Park.

23 Ingraham. This article also reports that people in the press box did, in fact, call out to Lawson and Gregg about the batting out of order.