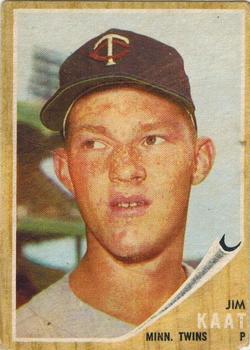 A good manager, like a good magician, always has a trick up his sleeve. But a true tactician has a trick up someone else’s sleeve. That’s how Cleveland skipper Birdie Tebbetts overcame the overpowering Jim Kaat and the first-place Twins on a night in June 1965 at Metropolitan Stadium, invoking an obscure rule about jersey sleeves to rattle Kaat just in time for the Indians to pull out a comeback win.

The Twins (32-16), off to their best start since they moved to Bloomington five years earlier, entered the game with a 2½-game lead over the White Sox and a six-game lead over third-place Cleveland (25-21), in pursuit of the franchise’s first pennant since 1933. The Indians, winners of four of their last five games, had also started off on the right foot, following four seasons of bouncing back and forth between fifth- and sixth-place finishes.

The teams had split the first two games of a four-game series when Kaat took the mound. Before the bizarre and contentious events of the ninth inning, the contest was merely a methodical pitchers’ duel. Kaat picked the Cleveland lineup apart, retiring nine of his first 11 batters, eight of them on groundouts. Max Alvis drew a one-out walk in the second, and pitcher Ralph Terry drew a one-out pass in the third. Not until Vic Davalillo led off the fifth inning with an infield single could Cleveland come up with a hit off Kaat. The lanky lefty responded by striking out the next two batters, then getting Terry to ground out to second.

Terry, meanwhile, cruised just as steadily as Kaat. Acquired before the season in a trade with the Yankees, where he won two world championships,1 the veteran scattered three hits over his first six innings. Seeking his 100th career win, Terry didn’t give up a walk the entire night.

After six innings the game was scoreless and the hitters hapless. Only three Indians and four Twins had reached base, and none caused either starter to sweat. The hurlers suffered minor hiccups in the seventh, when Davallio struck again for Cleveland with a two-out single and then stole second. But Kaat got Pedro Gonzalez to ground out to strand the runner. In the bottom half of the inning, Bob Allison cracked a two-out double to left, only to see catcher Earl Battey fly out to center.

The Indians went quietly once more in the eighth. Then, with the game still scoreless, the Twins made their bid to avoid extra innings. Jerry Kindall led off with a double to the left-field corner. Kaat laid down a bunt, which catcher Joe Azcue fielded but threw wildly to first, leaving runners at the corners. The next batter, Zoilo Versalles, lifted a fly ball to center, and Kindall tagged up to give the Twins a long-awaited 1-0 lead.

After Terry retired the next two batters, it looked as though his only major mistake, the Kindall double, would be enough to lose the game. That eighth-inning sacrifice fly, the Akron Beacon Journal wrote, “loomed large as the ‘winning’ run for the Twins.”2 After all, “Kaat had three-hitted the Indians through the eight frames and needed only to hold them scoreless in the ninth for [a] shutout.”3

The inning started according to plan, with Kaat fanning Chuck Hinton for the first out. But when Rocky Colavito worked the count to 2-and-1, Tebbetts emerged from the dugout to make his move.4

Tebbetts approached home-plate umpire Bill Haller and complained that Kaat had a hole in the sleeve of the undershirt below his jersey on his throwing arm, and that it was an illegal distraction to his hitters. Rule 1.11(c) required sleeves to be of the same length and not “ragged, frayed, or slit.”5

Haller went out to the mound, confirmed the sartorial sin, and sent Kaat to the dugout for attention from Twins trainer George “Doc” Lentz. Lentz cut off the sleeve of the undershirt above the hole to remove it. Then, to comply with the rulebook, Lentz amputated a portion of the other sleeve so it would be the same length.6

Kaat was in the clear, but he could be forgiven if the unusual interruption had disrupted his rhythm. He was given a couple of warm-up pitches to adjust to the alteration, then had to finish the at-bat of Colavito. He walked Rocky on two straight pitches.

You might say the Indians had literally spotted an opening. The sleeve flap seemed to make the ace flappable.

With a runner on, up came Alvis, who had grounded out his last time up. Credit Kaat’s shorn sleeves or just a crazy coincidence, but this time Alvis fared better.

“After a ball and a called strike on Alvis, Kaat came in with one a little too fat – and Alvis parked it deep in the left stands,” lamented the Minneapolis Star.7 The Indians took the lead.

Kaat retired Davalillo on a popup, but when he surrendered a single to Gonzalez, Minnesota manager Sam Mele pulled his starter and called for reliever Al Worthington to get the third out. After another single, Worthington finally did. After keeping Cleveland off the scoreboard – and, for the most part, off the basepaths – for 25 outs, the Twins would now have to come from behind.

His managing shenanigans having paid off in spades, Tebbetts brought in reliever Gary Bell to sew things up in the bottom of the ninth. After retiring Harmon Killebrew, Bell saw Jimmie Hall reach on a grounder misplayed by Chico Salmon.8 Allison, one of the few Twins with a hit in the game, came to the plate representing the winning run. But Bell struck him out, and then got Battey to ground out to third to close out the most unlikely of wins.

Reporters asked Tebbetts afterward how long he had known about the hole in Kaat’s sleeve.  “From the first inning,” Tebbetts said. Then, perhaps with a wink, he added, “[O]f course I really didn’t see it until Colavito was at bat in the ninth inning.”10

They asked Tebbetts if he credited his visit to the umpire with turning the tide in the ninth.

“No, I’d say you don’t find many sluggers at Colavito’s level willing to draw a walk in a ninth-inning situation as he did,” Tebbetts demurred.

“I called Tebbetts a lot of good names when he was standing at home plate,” said Mele, a former Red Sox teammate and longtime friend of Tebbetts, about his off-color reaction to the ninth-inning intrusion. “He probably is the only manager who would do something like that – wait nine innings to call it. I won’t forget it, and I don’t think our players will either.”11

“Can a friendship that increased through 18 years of baseball suddenly collapse over a hole in a sweatshirt?” asked the Minneapolis Star.12 Mele pointed out that Tebbetts had spoken with an umpire about a hole in Kaat’s sleeve in a meeting between the same two teams back on April 28. That time, Tebbetts said the sleeve was fine and the game should continue.13 In a presumably unrelated detail, Tebbetts’s team was ahead by three runs.

Still, Mele had to credit his friend with doing whatever it took to give his team a much-needed edge, and seemed to water down his sour grapes with some grudging affirmation. Had he been faced with the same opportunity, Mele admitted, “I might have done the same thing myself.”14

1 In addition to the 1961 and 1962 championship teams Terry was a part of, he pitched in three games with the Yankees in 1956, although he did not appear in the World Series.  Terry is remembered for finishing two World Series.  One was in 1960 when he gave up a home run to Bill Mazeroski that gave the Pittsburgh Pirates the championship.  Two years later Terry pitched a four-hitter in a 1-0 win over the San Francisco Giants in Game 7 of the World Series.

8 Schlemmer. The play was scored as a hit.