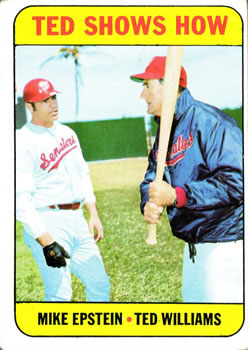 Baseball card number 539 in the 1969 Topps set, titled “Ted Shows How,” captured newly appointed Washington Senators manager Ted Williams giving first baseman Mike Epstein a spring-training hitting lesson. “If Ted can pass some of his hitting knowledge down to his players,” the back of the card read, “the Senators will have quite a dangerous club.”

The tutelage of one of baseball’s most accomplished hitters unlocked Epstein’s potential that season, as the brawny Californian reached career highs in batting average (.278), home runs (30), and RBIs (85). In between terrorizing American League pitchers, Epstein gave fans in Buffalo, New York, an eyeful of his power when the Senators stopped in the Queen City for an early-season exhibition against their Triple-A farm club, the Buffalo Bisons of the International League.

The exhibition stirred up controversy in New York State’s western corner, though it had nothing directly to do with Williams, Epstein, and their Senators colleagues.

The 1969 Bisons played most of their home games at Hyde Park Stadium in nearby Niagara Falls, New York. They had done so since July 1967, when riots rocked the neighborhood surrounding Buffalo’s War Memorial Stadium, their nominal “home” field.1 Hyde Park Stadium was much smaller – it hosted a Class A team starting in 1970 – but was located in a less troubled area, and attendance in Niagara Falls tended to be significantly higher than in Buffalo.2

Recognizing Williams’s power as a drawing card, the Bisons booked their 1969 exhibition against Washington to be played at War Memorial Stadium, rather than Hyde Park. This reportedly infuriated Niagara Falls fans, who declared that their city had gone out of its way to help the Bisons, including investing in improvements at Hyde Park Stadium, only to be passed up when a big star came to town.3 The Washington-Buffalo 1968 exhibition – before Williams’s arrival – had been played in Niagara Falls.4

Buffalo sources acknowledged the help Niagara Falls had provided but said they couldn’t pass up the chance of a big payday at the larger park. An unnamed “Buffalo informant” told the Rochester Democrat and Chronicle: “Sure, we could probably draw about 6,000 [at Hyde Park Stadium]. In War Memorial Stadium, though, we could have a gate of 18,000, maybe 20,000, if all goes well. … Why shouldn’t we shoot for this big gate? We could use the money.”5

That estimate proved overly optimistic. Only 8,391 fans came to the aging stadium nicknamed “the Rockpile” on a Monday night to see Williams’s Senators do mock battle with manager Hector Lopez’s Bisons. Washington had finished last in the 10-team 1968 American League, 31 games below .500. But Williams had his team playing unexpectedly well, in fourth place in the new AL East Division with a 29-29 record, 11½ games behind Baltimore. Buffalo stood in sixth place in the eight-team IL with a 19-22 record, six games behind first-place Toledo.6

Williams gave the start on the mound to left-hander Frank Bertaina, possessor of a 1-2 record and 6.31 ERA for the Senators to that point in the season.7 Managing his pitching staff carefully, Williams also enlisted Buffalo pitcher Dick Bosman to join the Senators for the exhibition.8 Bosman had made nine appearances with the Senators that season, with a record of 4-2 and a 2.64 ERA, but was sent down to Buffalo in late May to recuperate from a sore right shoulder.9 Lopez tapped righty Bruce Howard to start for Buffalo. That season was Howard’s last as a pro, and working for three minor-league teams across two levels, the former big leaguer compiled a 2-7 record and a 4.93 ERA.

Before the exhibition began, players on both sides treated the fans to a home-run derby. Bisons outfielder Sam Bowens, who hit 11 dingers in 58 games with Buffalo, won the contest with four homers. But Epstein wowed the crowd with distance, hammering a soft toss from Senators coach Wayne Terwilliger onto the right-field roof and out of the park.10

Eighty-two-year-old Baseball Hall of Famer Joe McCarthy, a Buffalo-area resident and Williams’s former manager with the Boston Red Sox, threw out the first pitch to Williams.11 The Washington manager also enjoyed a brief reunion with umpire Tom Ravashiere, a longtime minor-league arbiter,12 who played with Williams in 1942 on a military team at the Chapel Hill Preflight Training School.13

The home Bisons jumped out to a 2-0 lead in the top of the first, powered by several big-league vets. First baseman Dick Nen hit a rooftop home run of his own, right fielder Bowens doubled, and left fielder Dick Smith drove in Bowens with a single. Bertaina settled down from there, allowing no additional hits in his five-inning stint while striking out seven.14

Washington pulled even over the next two innings. Second baseman Bernie Allen hit a solo homer in the second. In the third, right fielder Ed Stroud hit a triple and left fielder Frank Howard boomed a double off Bruce Howard – no relation15 – to tie the score, 2-2.16

Bosman came on for Washington in the sixth, and the Bisons pieced together their third run when third baseman Frank Coggins singled, moved up on an infield out, and scored on a flared single by Smith. Once again the Senators fought back, this time off left-handed Buffalo reliever Dick Lines. In the seventh inning, Epstein tied the game with a homer to center field, estimated at 410 feet, before Dick Billings’ double and Hank Allen’s single gave the Senators a 4-3 lead.17 Meanwhile, Bosman shut out the Bisons in the seventh and eighth, helped by a backhand leaping catch by left fielder Brant Alyea in the eighth that likely took an extra-base hit away from Buffalo’s Rick Hense.18

Washington hustled its way to an insurance run in the eighth off another Bisons pitcher, Rupe Toppin. Center fielder Del Unser singled, stole second, took third on a wild pitch, and scored on Stroud’s sacrifice fly for a 5-3 lead. As it turned out, the Senators would need that run. With 20-year-old minor-league righty Dennis Dalton19 working the ninth for Washington, catcher Dewey Kalmer singled and took second on an error by shortstop Tim Cullen. A single by Coggins made the score 5-4. But with the potential tying and winning runs aboard, Dalton struck out Buffalo first baseman Gene Martin to close out the game.20

After the game, Epstein credited Williams for his hitting surge: “He hasn’t told me anything new or exciting. It’s just his presence, the knowledge that a .400 hitter, one of the game’s greatest men, is here coaching us. I go to the plate with a new confidence, an attitude that, ‘If he can do it, why can’t I?’”21

The Senators closed the season with an 86-76 record, fourth in the AL East but just one game behind third-place Boston. It was the first winning season for the second Senators franchise, created in 1961, and the only winning season the team would have in 11 seasons in Washington. The news was not so sunny in Buffalo, where the Bisons finished seventh with a 58-78 record. Lopez did not manage another professional team until 1994, and the Buffalo team transferred to Winnipeg partway through the 1970 season.22

Williams praised several Bisons players for their effort in the exhibition, but the one who benefited most was Bosman. According to The Sporting News, Williams was so impressed with Bosman’s pitching that he brought him back to rejoin the Senators.23 Bosman went on to lead the American League in ERA, posting a sparkling 2.19 to go along with a 14-5 record.

One Bisons player went on to make baseball history on a different level. The Sporting News suggested that catcher Kalmer might have impressed Williams by throwing out three Senators runners trying to steal. But Kalmer never got a call to the majors, and he retired after the 1969 season. From there, he spent 40 seasons as a college baseball coach at two schools in Illinois, Quincy University and Bradley University. He accumulated more than 1,000 wins and coached several future major leaguers, most notably Hall of Famer Kirby Puckett.24 It seems safe to say that Kalmer helped improve the skills of many players – even if Topps never issued a card titled “Dewey Shows How.”

Image of 1969 Topps card #539 downloaded from the Trading Card Database.

The author thanks FultonHistory.com for making several of the cited newspapers accessible online.

1 Also the home stadium, at the time, of the Buffalo Bills of the American Football League.

5 Pinckney. Alli reported that the Senators paid all their own expenses and received no money from the game, presumably to help their Triple-A affiliate as much as possible.

6 International League standings as printed in the Rochester Democrat and Chronicle, June 9, 1969: 1D.

7 Exactly one week after the game, Bertaina was traded to the Baltimore Orioles for minor leaguer P.J. Campbell.

12 Ravashiere eventually reached the big leagues at age 58 in April and May 1979, working seven Detroit Tigers games in Detroit during a strike by unionized major-league umpires. https://www.baseball-reference.com/bullpen/Tom_Ravashiere, accessed online February 25, 2021.

15 Bruce Howard was no relation to Frank Howard, but he was kin to another big leaguer: His son David Howard was an infielder with the Royals and Cardinals between 1991 and 1999.

19 Dalton had been a second-round pick of the Atlanta Braves in the June 1967 amateur draft out of high school in Virginia. He made only seven appearances in 1969, going 0-1 with a 3.60 ERA for the Senators’ team in the Florida State Instructional League. He pitched parts of six seasons in the minors, topping out with 14 games at Double-A Pittsfield in 1973.