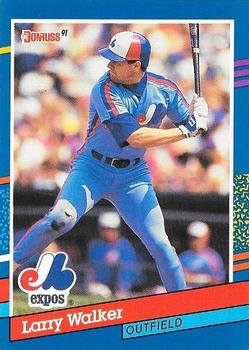 Larry Walker’s hold on a major-league job was slowly slipping away. His first full season in the big leagues had gone reasonably well; in only 419 at-bats he nearly posted a 20-20 season.1 Walker was even named to the 1990 Topps’ All-Star Rookie team. But a 1991 spring-training slump had carried over into the regular season, and the 24-year-old Canadian found himself in manager Buck Rodgers’s doghouse.2 When the Expos began a 10-game West Coast swing in San Diego on May 10, Walker’s batting average was a feeble .197.

Despite winning the final three games of its homestand, Montreal was still in the NL East cellar with a 12-15 record, six games behind the division-leading Pirates. The Padres, on the other hand, had spent most of the early part of the 1991 season in first place in the NL West. They came into their three-game series with the Expos with a 15-13 mark, good enough for a first-place tie with Atlanta.

The series opener was a replay of the pitching matchup from five days earlier in Montreal.3 Expos rookie Brian Barnes made his second start of the season after coming off the disabled list and getting roughed up by San Diego on May 5. The Padres countered with 35-year-old veteran Ed Whitson (2-3, 4.01 ERA).

Neither starting pitcher stood out in this game; Barnes was relieved by Barry Jones after facing two batters in the bottom of the sixth, and Whitson was removed for a pinch-hitter later that same half-inning. Each team scored a single run in the second and sixth innings, and the game was tied, 2-2, when the Padres came to bat in the seventh inning.

Rodgers was intent on preventing Tony Gwynn and Fred McGriff from beating the Expos. The 31-year-old Gwynn had already won four batting titles,4 and McGriff was on a torrid 14-game hitting streak.

With one out in the bottom of the seventh and Bip Roberts on second base, Rodgers had Gwynn walked intentionally. After Benito Santiago was retired on a popup for the second out, McGriff was also walked intentionally, loading the bases. The strategy backfired when Roberts took a big lead off third base and faked a steal of home, causing Jones to commit a balk, which gave the Padres a 3-2 lead.5

San Diego’s lead was short-lived. Tim Wallach led off the top of the eighth with a bloop single off Mike Maddux, who had relieved Whitson an inning earlier. With the left-handed-hitting Walker due up next, Padres manager Greg Riddoch brought in his southpaw closer, Craig Lefferts. Walker pulled the first pitch from Lefferts deep into the right-field seats for a two-run homer, and the Expos jumped in front, 4-3.

Tim Burke, who had come on in relief of Jones with one out in the eighth inning, retired the first two San Diego batters in the ninth. With two outs and nobody on base, the red-hot McGriff stepped up to the plate. Rodgers had Burke issue another intentional walk to McGriff, putting the potential tying run on base. The next batter, pinch-hitter Tom Lampkin, reached on an infield single. Despite having the speedy Paul Faries on the bench,6 Riddoch chose not to pinch-run for the slow-footed Lampkin.

With the Padres down to their final strike, pinch-hitter Garry Templeton drove a 3-and-2 pitch into the right-center-field gap for a double, and McGriff scampered home with the tying run. Lampkin was waved home, and the relay throw from shortstop Tom Foley beat him to the plate. He attempted to dislodge the ball by bowling over Gilberto Reyes, but the Montreal catcher hung on for the third out, much to the disappointment of the 54,841 fans in attendance.7

The top of the 10th inning played out in a similar fashion to the Expos’ half of the eighth. Wallach opened the inning with a single off the new Padres pitcher, Wes Gardner. Walker followed with his second consecutive home run, a long blast to left-center field on a 3-and-1 pitch, and the Expos took the lead, 6-4. The homer gave Walker, who had singled in his first two at-bats, four hits in the game.

Burke retired the Padres in order in the bottom of the 10th to preserve the Expos victory.8

Walker had several career firsts in the game. He recorded his first multi-homer game, first back-to-back round-trippers, first four-hit game, and first four-RBI game. “It was the best night of my career by far,” Walker told reporters afterward. “I almost doubled everything I’ve done this year. It feels good.”9 The young slugger was not exaggerating. Walker started the night with one homer and four RBIs in 76 at-bats. In his two final at-bats of the game, he hit two home runs and knocked in four runs.

The next day, Expos ace Dennis Martínez tossed a complete-game, 5-1 victory over the Padres. Montreal completed the sweep by roaring back from a 6-3 deficit in the series finale, with Walker scoring the eventual game-winning run in a four-run eighth inning. The three-game sweep knocked the Padres down to fourth place, two games back of the Braves. San Diego never rose any higher than third place for the remainder of the season. The Padres finished 10 games behind Atlanta with an 84-78 record.

The Expos reverted to their losing ways after leaving San Diego. They dropped 14 of their next 19 games, and Rodgers was fired on the morning of June 3, ending his six-plus-year run in Montreal. His replacement, 36-year-old Tom Runnells, fared no better. Montreal finished dead last with a 71-90 record.10 In the eight-year period between 1987 and 1994, it was the only season in which the Expos failed to play at least .500 baseball.

Walker’s outburst against the Padres on May 10 was a brief glimpse at what was to come. His inconsistency continued for the remainder of the first half, which ended abruptly on June 28 when he was placed on the disabled list with a strained hamstring. He returned to action on July 14 to play the best baseball of his young career. Walker hit .338 with 10 homers and 43 RBIs in 263 second-half at-bats, raising his season batting average to .290 and solidifying his status as a budding major-league star.

Walker had a breakout season in 1992, hitting .301 with 23 homers and 93 RBIs, to go along with 18 stolen bases. His performance earned him the Silver Slugger and Gold Glove awards, in addition to a spot on the All-Star team — all career firsts. His contributions helped the Expos to a surprising second-place finish, and as a result, Walker received the fifth-highest vote share for the National League MVP Award.

The native of Maple Ridge, British Columbia, had two more very good seasons with the Expos.11 In 1994 Walker, along with two other 27-year-olds, Marquis Grissom and Moises Alou, formed one of the best outfields in baseball. The dynamic trio helped the blossoming Expos post a major-league-best record of 74-40 before the season-ending strike destroyed their hopes of a World Series championship.12

Unfortunately for Montreal baseball fans, the strike failed to improve the economic conditions for small-revenue teams, and so the Expos decided to slash payroll by 35 percent in 1995. 13 Since Walker wanted to remain in Montreal, the team declined to offer him arbitration in case he accepted a contract it did not want to pay.14 As a result, Walker signed a four-year, $22.5 million free-agent contract with the Rockies in early April 1995, and the Expos forfeited their compensatory draft picks.15

Few were surprised when Walker’s offensive numbers jumped significantly after his move from pitcher-friendly Olympic Stadium to the thin air of Coors Field. Walker had been a relatively well-kept secret while playing outside the media spotlight in Canada. In Denver he became one of the game’s biggest stars. He won the NL MVP Award in 1997 by putting up eye-popping numbers.16 His 9.8 Baseball-Reference Wins Above Replacement (bWAR) that season was the third highest by a National League hitter in the previous 30 years.17 As a member of the Colorado Rockies, Walker won three batting titles, five Gold Glove awards, and two Silver Slugger awards, and he was named to four All-Star teams.

Walker’s multi-homer game against the Padres in May 1991 may have been his first in the majors, but it certainly was not his last. He hit two home runs in a regular-season game 29 times during his stellar 17-year career.18 On three other occasions, he slammed a trio of home runs in a game.19 Surprisingly, none of those three-homer games took place in Coors Field. He also hit a pair of home runs for the St. Louis Cardinals in Game One of the 2004 NLDS. Including the postseason, Walker finished his career with 33 multi-homer games — the same number that he wore on his jersey throughout his Hall of Fame career.

3 On May 5 Ed Whitson pitched a complete game and limited the Expos to seven hits and three earned runs in a 6-3 Padres victory. Brian Barnes took the loss. He allowed six earned runs in 4⅔ innings.

8 Rodgers deserved some of the credit for the victory since he outmanaged Riddoch by a wide margin. His strategy of pitching around Gwynn and McGriff worked like a charm. Gwynn went 0-for-4 with an intentional walk and McGriff went 0-for-1 with three walks, two of which were intentional. The Expos succeeded in snapping McGriff’s 14-game hitting streak.

10 The Expos had the worst offense in the National League in 1991. Iván Calderon (139 OPS+) and Larry Walker (127 OPS+) were the only two above-average-hitting regulars in their lineup. Thirty-three-year-old Tim Wallach had a precipitous drop-off in production that year. Andrés Galarraga underwent midseason knee surgery and suffered through the worst season of his career. Moises Alou, who turned 25 years old on July 3, missed the entire season with a shoulder injury.

12 The 1994 Expos were also the youngest team in the major leagues. They averaged 26.2 years of age.

15 The catastrophic changes made to the Expos roster between April 5 and April 8, 1995, were the beginning of the end for the Expos in Montreal. Since the other major-league teams were aware that the Expos had to slash payroll immediately prior to the start of the 1995 season, Montreal was unable to obtain fair market value for any of the players they had to move. Grissom, Ken Hill, and John Wetteland were all traded away to contenders at bargain-basement prices. The costliest blow came on April 8, 1995, when Walker, Montreal’s popular Canadian player, was signed as a free agent by the Rockies, and the Expos received nothing in return. After they slashed their payroll, the Expos’ winning percentage dropped from .649 in 1994 to .458 in 1995. Many fans never forgave the Expos for completely dismantling the best team in baseball before they had an opportunity to win a World Series. Expos fans suffered the indignity of seeing Walker, Grissom, Hill, and Wetteland all play in the 1995 playoffs for their new teams. Watching Grissom help the rival Braves win the 1995 World Series was a particularly bitter pill to swallow.