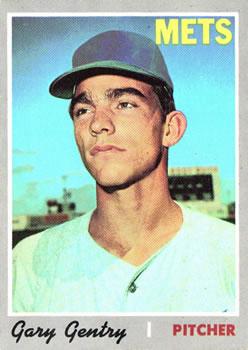 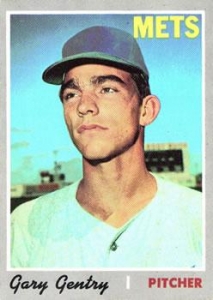 It was the first meeting between the Mets and the Cubs since New York ran away with the National League Eastern Division on their way to the 1969 World Series. Now the Cubs were on top of the division after a little more than a month of the 1970 season, holding a 2½-game lead over the Mets and the Cardinals. But they had struggled so far in May, going just 3-7 to keep the division close. New York was in Chicago for two games after splitting a pair of games against Montreal.

One day earlier Ernie Banks, the leader of the Cubs team, hit his 500th home run in a 4-3 extra-inning win over the Atlanta Braves. Flush with excitement over that accomplishment, 9,823 fans braved the 40-degree temperature and brisk wind to see their team face off against the team that deprived them of a championship one year earlier.

Cubs manager Leo Durocher sent Bill Hands to the mound. Hands entered the game with a 5-1 record and a 2.28 ERA in seven starts, and he was looking for another win to stay tied with Tom Seaver for the league lead in victories. It was the second time Hands was facing the Mets since he sent Tommie Agee to the dirt on September 8, 1969.1

Hands looked strong, striking out five batters in the first two innings and limiting the Mets to one hit, a single by Ken Boswell in the second, until Art Shamsky hit a solo blast over the right-field wall in the fourth that gave the Mets the lead. It was Shamsky’s fourth homer in five games.

Gary Gentry started for the Mets. The 23-year-old Gentry, now in his second major-league season, had added 13 pounds over the winter and said he felt it improved his pitching. “I think I’m a better pitcher now,” he said. “The extra weight, which I put on naturally, without trying, lets me throw the ball real hard now without as much effort.”2

Gentry got through the first with some excellent defensive work. With two outs, Billy Williams hit the ball in the hole on the right side. “[The] ball took a trick high hop off [the] grass edge but [Mike] Jorgensen stuck with it,” the New York Daily News reported.3 First baseman Jorgensen made the toss to Gentry for the final out.

Gentry continued to keep the Cubs off the basepaths until the fifth, when he gave up a leadoff walk to Ron Santo. But the walk came to naught when Johnny Callison hit into a double play. Asked why he looked upset after the walk, Gentry said, “I’m anxious to get him this season. Last year he hit four or five home runs off me.”4

Wayne Garrett replaced Joe Foy at third base in the fourth; Foy had been hit on the wrist by a pitch two innings earlier.

The Mets added to their lead in the fifth inning. Garrett led off with a double and moved to third on a fly ball by Jerry Grote. Gentry then singled to plate Garrett and the Mets were ahead 2-0.

The Mets added two more runs in the seventh. Jorgensen led off with a walk and Garrett brought him home with a triple. The next batter, Grote, singled and Garrett came across the plate with the Mets’ fourth and final run.

After Santo’s walk in the fifth, Gentry retired the next 10 Cubs batters. The closest the Cubs got to a hit during that stretch came in the seventh. Glenn Beckert sliced the ball to right. It looked as though it might fall, but the wind seemed to hold the ball up and Shamsky easily caught it.

Asked later if he knew that he was throwing a no-hitter, Gentry said, “I started thinking about a no-hitter by the fourth inning. The fourth inning is always tough when you’re pitching against the Cubs because Banks and Santo are usually coming up the second time.”5

Santo opened the eighth with a fly ball that sent Agee to the warning track before he caught it among the ivy along the outfield wall. Callison then hit a fly ball that Shamsky tracked down in right.

With two outs, Gentry faced Banks. “Mr. Cub,” now 39 years old, had not hit the ball out of the infield in his previous two at-bats. He worked the count to 2-and-2. The next pitch came in high and on the inside corner. Gentry said he was trying to challenge Banks because “I didn’t want to pitch away and have him bloop one over second base.” But Banks connected on the pitch and sent it flying into left field.

Dave Marshall chased the ball down, initially slipping on the grass. When the wind helped to carry the ball, Marshall ran faster. He was able to get his glove on the ball but failed to hold on to it. Banks was on first and Gentry’s no-hitter was spoiled.

“I slid a little just when I got to the ball. At first I didn’t think I had any chance for it but the ball seemed to stay up and I went for it,” Marshall said afterward.6 Marshall demonstrated his attempt at catching the ball later in the clubhouse. “The ball hit the tip of my glove,” he said as he pressed the glove into the clubhouse floor. “The third base umpire, Chris Pelekoudas, said if I had scooped it more, I would’ve caught it.”7

Grote, Gentry’s catcher, said, “I don’t think that Gary made a mistake until Banks got him. I called for a slider and he shook me off.”8 Gentry himself said, “If the wind wasn’t blowing across, it’s probably caught. But then Santo’s would have been a home run, and the ball that Beckert hit would have blooped in.”9

With Banks on first, the Cubs had spoiled a Mets no-hitter for the second time in as many seasons. Seaver had shut down the Cubs at Shea Stadium on July 9, 1969, before Jim Qualls singled with two outs in the eighth. The score in that game was also 4-0. Seaver, who was pulling for his teammate from the bench, said, “I thought he was going to get it.”10

Hands pitched a good game despite the four runs he surrendered. He went the distance and struck out 12 Mets, a career high, before leaving the game for a pinch-hitter in the ninth. But “without any runs—or the nearest hint of any—he could look back on this contest as one in which he never had a chance.”11

Despite losing his no-hitter, Gentry stayed focused on the win. After he retired Jack Hiatt on a fly ball to start the ninth, Willie Smith batted for Hands and Gentry hit him, giving the Cubs their third baserunner of the game. But that didn’t slow Gentry down and he got Don Kessinger and Beckert to pop out for the final two outs. Gentry’s win was the fifth one-hitter in the Mets’ short history.12

Mets manager Gil Hodges praised Gentry after the game, saying, “He was magnificent. Too bad he didn’t get it, but there will be other days. He’s young.”13 Even Cubs manager Durocher complimented Gentry, saying, “I’ve never seen him better.”14

Gentry told reporters that he was glad to be on the mound that day, because “[i]f I had to sit out this game, I’d froze.”15 He offered no apologies for the pitch he threw to Banks. “I didn’t want to pitch away and have him bloop one over second base,” Gentry said. “It was a good pitch. I got it where I wanted and he could’ve popped it up—but he didn’t.”16

The Mets’ win tightened up the division race. Hodges said, “Because we won it last year, we are expecting to do better and we should do better. I think that everybody in our division got off to a slow start this year except Chicago.” As for closing the gap on the Cubs, he commented, “I’d rather be a front runner and take my chances later in the season.”17

Hodges’ Mets and Durocher’s Cubs would not end up battling it out for the division crown for a second time at the end of the season. Pittsburgh took over first place just before the All-Star break and never relinquished it. Although Gentry never pitched a no-hitter for the Mets, he did throw another one-hitter, on April 18, 1971, against the Pirates.

1 The Mets and the Cubs were battling for the Eastern Division title when the Cubs visited Shea Stadium. In the first inning, Bill Hands sent Agee scrambling. Agee got up and eventually grounded out. But two innings later, he hit a home run to give the Mets a two-run lead in their eventual 3-2 victory. When the Cubs came up in the second, Mets starter Jerry Koosman hit Ron Santo with the first pitch. It was rumored that Cubs manager Leo Durocher ordered the pitch to send a message to the Mets as the series started. If it was deliberate, it didn’t work: The Mets won both games of the series to leave them just a half-game behind the Cubs. The Cubs went 8-17 in September to see their 5-game lead vanish as the Mets won the division and the 1969 World Series.

12 Mets pitchers flirted with no-hitters from their first year in the league, 1962. That year Al Jackson gave up a first-inning single before shutting down Houston the rest of the game. In 1966 Jack Hamilton surrendered a third-inning single to Ray Sadecki in the Mets’ second one-hitter. In 1969 Tom Seaver came the closest to a no-hitter when he kept the Cubs off the bases until Jim Qualls spoiled a perfect game with a one-out single in the ninth. Nolan Ryan pitched the Mets’ fourth one-hitter, against the Phillies on April 18, 1970, less than one month before Gentry pitched the fifth.