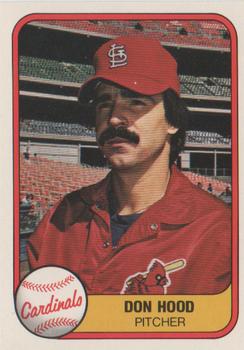 For the first three weeks of the 1980 season, the St. Louis Cardinals’ bullpen provided anything but relief. To wit: an 0-5 record, one save and a ghastly 7.46 ERA with 51 hits allowed in 35⅓ innings through April 29.1 “If we had the relief pitching, we’d probably be in first place,” general manager John Claiborne said.2

Instead, the Cardinals were third in the National League East Division with an 8-10 record when they opened a three-game weekend series against the NL West-leading Houston Astros (14-5) on May 2 at Busch Stadium. Six of the Cardinals’ 10 losses had come in the seventh inning or later, including four in the opposition’s last at-bat.3 Consequently, when St. Louis starting pitcher Bob Forsch departed the game against Houston in the second inning with an injury, it was reasonable that the home team and its fans figured they were in for a long night at the ballpark.

What they delighted in, however, was two veteran left-handed relievers, Don Hood and Jim Kaat, holding the Astros in check en route to a 9-1 Cardinals victory. Hood, signed as a free agent on March 13, worked 5⅔ innings, while Kaat, purchased from the New York Yankees on April 30,4 went the final 2⅓. Hood earned the win and Kaat the save — both firsts as members of the Cardinals. “I told my wife I wasn’t going to read the newspaper until there was a good story about the Cardinals’ bullpen,” Hood said. “I’ll be happy to read my newspaper tomorrow.”5

In the top of the second, Jose Cruz led off against Forsch and hit a groundball to first base. As he covered first to take the throw from Keith Hernandez, Forsch was spiked on the right heel by Cruz. The wound needed 15 stiches to close.6 Enter Hood, who was coming off a blown save in his previous appearance, April 29 against the Chicago Cubs, but did boast a respectable 2.70 ERA over his first six appearances. He promptly coaxed Enos Cabell to ground into a double play and, after César Cedeño doubled, retired Alan Ashby on a fly out. “To tell you the truth, I didn’t expect my name to be mentioned when the bullpen phone rang for a long time,” Hood said. “Someone said, ‘He wants you.’ I was looking around to see if there was someone behind me.”7

Hood permitted Houston its lone run in the third. He walked starting pitcher Nolan Ryan leading off and gave up a single to Terry Puhl. Craig Reynolds advanced the runners to second and third with a sacrifice bunt, and Ryan scored on a groundout to shortstop by Denny Walling. The Astros put runners on base in each of the next four innings against Hood, but he worked out of trouble every time. Houston was 0-for-10 with runners in scoring position against him. All told, Hood yielded six hits and three walks while facing 25 batters.

Meanwhile, the Cardinals took a 2-1 advantage with runs in the fourth and sixth. George Hendrick drove in Ted Simmons with an RBI single to tie the game and a Simmons sacrifice fly plated Hernandez with the go-ahead score.

After giving up a two-out single to Walling in the seventh and uncorking a wild pitch, Hood departed, receiving a standing ovation from the Friday-night crowd of 23,009. The 41-year-old Kaat snuffed out the threat and preserved the lead by getting Joe Morgan to ground out to shortstop.

In the bottom of the inning, the Cardinals erupted for seven runs, sending 10 batters to the plate against Ryan and relievers Joe Sambito and Frank LaCorte. Hendrick doubled leading off and scored on an RBI single by Ken Reitz. A double by Tony Scott put runners at second and third. Ryan struck out Kaat and was replaced by Sambito, who did not retire any of the four batters he faced. Garry Templeton singled home Reitz and advanced Scott to third. After Templeton stole second, Ken Oberkfell walked to load the bases. Hernandez followed with a two-run single, and Simmons put an exclamation point on the surge with a three-run homer to left field — his second of the season. LaCorte replaced Sambito and struck out Bobby Bonds and Hendrick to end the inning. Reitz, Hendrick, and Templeton each had two of the Cardinals’ nine hits in the game — raising their season batting averages to .403 (tops in the NL), .342 (fourth), and .341 (fifth), respectively.

Kaat authored perfect innings in the eighth and ninth, registering four groundouts and two strikeouts. As they did for Hood, the local faithful gave Kaat a standing ovation upon the conclusion of the 2-hour, 39-minute game. “The team was dancing three feet off the carpet tonight,” Cardinals manager Ken Boyer said.8

Combined with 1⅔ flawless innings in his Cardinals debut two days earlier, Kaat retired the first 12 batters he faced with his new club. “Sometimes, all you have to do is spark things,” said Kaat, designated for assignment by the Yankees and pondering a new career in broadcasting before being sold to the Cardinals. “I’ll give you an example. There are plenty of teams that have had hitting slumps. They get a guy in a trade and he starts hitting. Then all of a sudden — bing, bing, bing — everyone starts hitting.”9

Kaat proved prophetic, at least for a while. In their first 20⅔ innings in May, Cardinals relievers surrendered merely two earned runs.10 Overall, however, the bullpen proved to be a season-long bugaboo, registering a 3.93 ERA and 1.47 WHIP. Eight pitchers combined for a league-low 27 saves, led by rookie John Littlefield with nine after his recall from the Cardinals’ Triple-A farm club in Springfield, Illinois, in June.

Boyer was fired on June 8 — in between games of a doubleheader at Montreal — with an 18-33 record. Third-base coach Jack Krol managed the nightcap, and the following day Whitey Herzog was hired.11 The Cardinals wound up 74-88 and in fourth place in the NL East, 17 games behind the champion Philadelphia Phillies.

Kaat proved to be a valuable member of the St. Louis staff for several seasons. In 1980 — his 22nd major-league campaign — he went 8-7 with four saves and a 3.82 ERA. Among his 49 appearances were 14 starts, and he pitched six complete games, including one shutout — a 10-inning, 1-0, gem against the New York Mets on June 4. In his lone season with the Cardinals, Hood posted a 4-6 record with a 3.39 ERA in 33 games (25 relief appearances and eight starts). He went the distance in one of his starts, August 25 against the Astros at Busch Stadium, scattering four hits (all singles) in a 3-1 victory. The Cardinals released Hood after the season.

The Astros, who won the final two games of the early-May series against the Cardinals by identical 4-2 scores, went on to capture their first NL West title after defeating the Los Angeles Dodgers in a one-game playoff. Both teams were 92-70, and Houston claimed the winner-take-all tiebreaker, 7-1, on October 6 at Dodger Stadium. Philadelphia beat the Astros in the NLCS, three games to two, on its way to winning its first World Series.

6 Rick Hummel, “Bullpen Leaps to Redbirds’ Rescue,” The Sporting News, May 24, 1980: 27. In his next start, May 7 against the San Francisco Giants, Forsch pitched seven shutout innings and hit a three-run homer in a 12-2 Cardinals win.

11 Herzog was manager from June 9 to August 28 — compiling a 38-35 record — before taking over as general manager for John Claiborne, who was fired on August 18. Coach Red Schoendienst served as interim manager for the rest of the season. On October 24, Herzog assumed the dual role of manager and general manager.