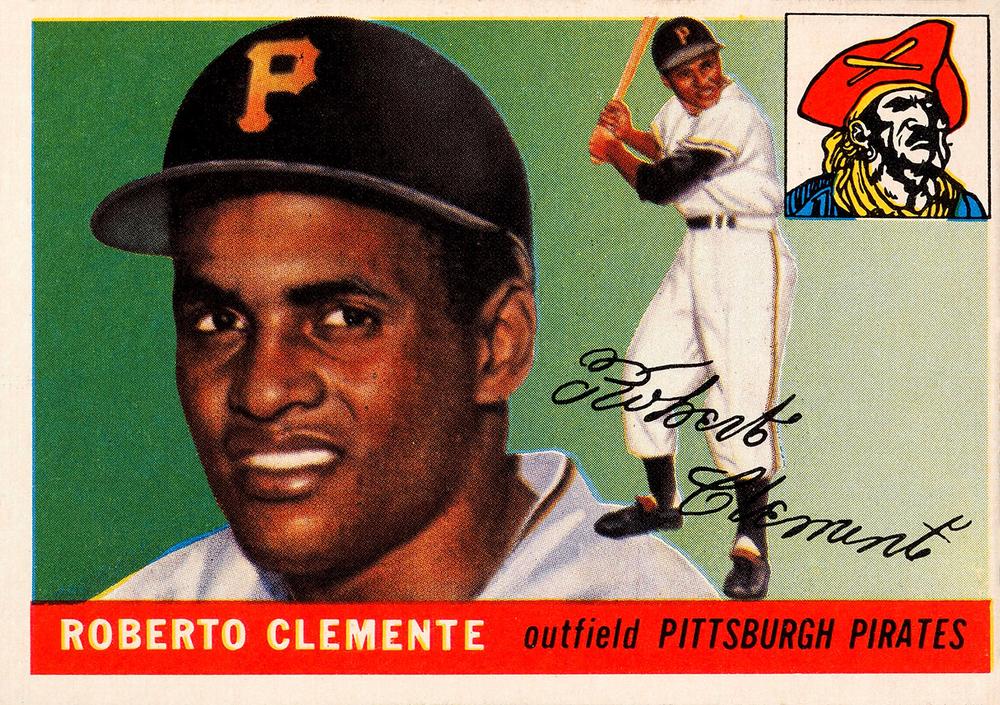 A freak ankle injury sidelined Roberto Clemente for four games in May 1955, momentarily sidetracking his spectacular rookie-year emergence in Pittsburgh. The 20-year-old native of Puerto Rico returned on May 29 with five hits in the Pirates’ curfew-interrupted 11-5 win over the Philadelphia Phillies in the second game of a doubleheader — but lost his chance for a sixth hit when he was removed for a pinch-runner.

In November 1954, Pittsburgh plucked Clemente from the Brooklyn Dodgers in baseball’s Rule 5 Draft. The Dodgers had signed Clemente for a reported $5,000 salary and $10,000 bonus during the previous winter; baseball’s bonus rules required them to keep him on their major-league roster for two years or risk losing him in the draft. When Brooklyn left Clemente unprotected after he spent 1954 in the Triple-A International League, the Pirates selected him with the draft’s first pick.1

Clemente watched Pittsburgh’s first three games of 1955 from the dugout. But manager Fred Haney plugged him into the lineup for game four on April 17, and it was the genesis of greatness. Through May 22, Clemente had a .281/.307/.450 batting line in 31 games and rave reviews from Pittsburgh’s media.

“Here’s a young Puerto Rican of 20, with a baseball future as bright as any fellow in the game today,” Les Biederman asserted in the Pittsburgh Press. “He can do everything well and above all, has the intense desire to play the game.”2 “No one has called him Willie Mays Jr., yet but Roberto Clemente, the young outfielder, isn’t far away from that tag,” Al Abrams observed in the Pittsburgh Post-Gazette. 3 “Roberto Clemente has been the most sensational figure to appear at Forbes Field since Kiki Cuyler rammed that explosive double to right with the bases loaded and won the 1925 [World Series],” Chilly Doyle gushed in the Pittsburgh Sun-Telegraph.4

But Pittsburgh, eighth-place finishers in the eight-team National League four times in the previous five years, lost 11 consecutive games between May 11 and May 22 and dropped into the league’s cellar. A 15-1 win over first-place Brooklyn at Forbes Field on May 24 snapped the slide; Clemente haunted his former employers with two hits, two runs, and three RBIs.5 The Pittsburgh Press noted that his uniform number had changed from 13 to 21.6

A night later, Clemente had two more hits against the Dodgers before rain washed away the game in the fourth inning.7 During batting practice for the series finale on May 26, Clemente — just five months removed from an auto accident that caused neck and back soreness for the rest of his life8 — caught his spikes in wet dirt while swinging and sprained his right ankle.9 He missed that game and games against the Phillies on May 27 and 28; the Pirates lost all three.

Clemente was again on the sidelines for the first game of a Sunday afternoon doubleheader with the Phillies on May 29. The Pirates also lost that one, 5-2, for their 15th defeat in 16 games. Philadelphia ace Robin Roberts earned the win, shrugging off over an hour in rain delays and Pittsburgh slugger Frank Thomas’s first home run of the season.

After his four-game absence, Clemente returned to action in the second game of the doubleheader, batting leadoff. Philadelphia, now on a seven-game winning streak after losing 13 straight earlier in the spring,10 was the Pirates’ closest competitor in the standings, but Pittsburgh still trailed their cross-commonwealth rivals by six games.

Veteran right-hander Max Surkont took the mound for the Pirates, hoping to stop their newest losing streak. Surkont, a product of St. Louis’s legendary farm system of the 1930s and ’40s, lugged a 5.78 ERA into his eighth start of 1955. He retired the Phillies in order in the first inning.

Clemente led off against Philadelphia starter Dave Cole. Only 24 years old, Cole nonetheless was on his fourth major-league team in six seasons. Deploying the opposite-field swing that became one of his trademarks,11 Clemente hit Cole’s first pitch to right field for a double.12

Rookie second baseman Gene Freese followed Clemente. The 21-year-old Freese had drawn unwelcome national attention a day earlier when his baserunning error — failing to touch second base from first after fellow rookie Román Mejías’s apparent game-ending single — cost the Pirates a win over the Phillies.13 Freese dropped down a bunt. Cole bobbled the ball for an error, and the Pirates had runners on first and third.

Jerry Lynch drove in Clemente with a single to center. Freese advanced to third on Lynch’s hit and scored on Frank Thomas’s long fly ball to left. Singles by Preston Ward and George Freese, brother of Gene Freese, brought home Lynch for a 3-0 Pittsburgh lead.

Clemente ignited the Pirates again in the third. With one out, his hit went off second baseman Bobby Morgan’s glove. Morgan picked up the ball and threw to first, but his throw landed in Pittsburgh’s dugout. Clemente took second; the play was ruled a single and an error. Gene Freese singled in Clemente to push Pittsburgh’s advantage to 4-0.

Aided by a double play, Surkont faced the minimum nine batters through three innings, but the Phillies broke through in the fourth. With one out, Glen Gorbous’s bunt down the third-base line stayed fair for a single. Del Ennis singled one out later. Willie Jones — along with Ennis and Richie Ashburn the only starters remaining from Philadelphia’s “Whiz Kids” 1950 National League championship team — drove Surkont’s pitch over the scoreboard in left field for a three-run home run, cutting the deficit to 4-3.

After Clemente led off the bottom of the fourth with a single, giving him the second three-hit game of his young career, first-year Philadelphia manager Mayo Smith replaced Cole with Thornton Kipper. Gene Freese greeted Kipper with another single, but Lynch short-circuited the inning by grounding into a double play.

The relentless Pirates expanded their lead an inning later. Jack Shepard, catching regularly while Toby Atwell recovered from a broken finger,14 walked with one out against Kipper and moved to second on Dick Groat’s single. Clemente’s two-out double down the right-field line, his fourth hit of the game, scored Shepard for a 5-3 Pittsburgh edge.

Surkont dodged Earl Torgeson’s two-out triple in the top of the sixth, and Pittsburgh resumed its siege in the bottom of the inning. Thomas, who snapped a string of 33 games without a home run in the opener, batted with one out. He made it a two-homer day by lining Kipper’s pitch over the scoreboard in left, increasing the lead to 6-3.

Ward followed with a walk. George Freese doubled him home. Smith summoned Ron Mrozinski to replace Kipper. One out later, Groat singled to score Freese. The Pirates had an 8-3 lead.

Surkont’s scoreless seventh set the stage for Clemente, leading off the bottom of the inning. Clemente doubled to make it five hits — and three doubles — in five plate appearances. Not wanting to risk further injury to Clemente’s ankle, Haney sent in Mejías to pinch-run.15

But time was running out at Forbes Field. Pennsylvania law forbade Sunday baseball after 7 P.M.16 The opener’s rain delays had set the nightcap on a tighter timeline than originally anticipated. Mrozinski set down the next two Pirates and then the clock struck seven. Play was suspended until Philadelphia’s next visit, in July.

On July 8 the Phillies returned to Pittsburgh. The Pirates remained in last place; Philadelphia still occupied seventh. When the game reconvened, Mrozinski was back on the mound. Marv Blaylock was the new Phil at first, replacing Torgeson, who had been sold to Detroit on June 15. Mrozinski retired Thomas to end the inning.

Pittsburgh’s eighth-inning defensive alignment also reflected the passage of time. Johnny O’Brien completed a two-year Army tour in June and became the Pirates’ everyday second baseman; here, he replaced Gene Freese.17 George Freese was demoted to the minors; Dick Cole took over at third.18 Atwell, now recovered from his broken finger, substituted for Shepard at catcher. Surkont continued his start; Ennis’s RBI single cut the deficit to 8-4, but the Phillies moved no closer.

The Pirates then sewed it up against left-hander Bob Kuzava. After one out, singles by Cole, Atwell, and Groat — the fourth hit of the game for Pittsburgh’s shortstop — produced a run. Kuzava got two strikes on Surkont, but the Pirates pitcher bunted for a hit, loading the bases.

The leadoff spot was due, but this time it was Mejías, who stayed in the game in right field after running for Clemente. There would be no decline in productivity. The 24-year-old native of Cuba singled, driving in Atwell and Groat for an 11-4 lead. Surkont allowed an unearned run in the ninth but closed out the complete-game win.19

Clemente missed the chance for six hits when Mejías ran for him, but still had the first five-hit game of his Hall of Fame career. He had seven more five-hit games before his tragic death in a plane crash on New Year’s Eve 1972.

In addition to Clemente’s five-hit game, the doubleheader included Frank Thomas’s first two home runs of 1955, after he went homerless in the Pirates’ first 33 games of the season. Thomas led the 1954 Pirates with 23 home runs, batted .298/.359/.497, and received MVP votes for the second season in a row, but held out during the following spring in a salary dispute with general manager Branch Rickey. The 25-year-old outfielder started slowly after signing, batting only .149/.208/.191 through the first game of Pittsburgh’s doubleheader with the New York Giants on May 22. Thomas eventually got on track and posted a .308 batting average after August 20. His 25 home runs again led the Pirates.

At SABR’s 48th annual national convention, held in Pittsburgh in 2018, Thomas, then 89 years old, appeared on a panel discussion of Rickey. He spoke bluntly about the contract negotiations. “Mr. Rickey and I had our problems,” Thomas remembered. “He treated me like I was dirt on his feet. … If we would have had agents back then … we went in to talk contract by ourselves. They had the upper hand; we were slaves back then. We couldn’t go anywhere. We either signed or we couldn’t play baseball. And if you loved baseball as much as I did, you signed.”20

In addition to the Sources cited in the Notes, the author consulted the Baseball-Reference.com and Retrosheet.org websites for pertinent material and the box scores noted below; newspaper game coverage in the Philadelphia Inquirer and Pittsburgh Post-Gazette; and SABR Baseball Biography Project biographies of several players who participated in the game, especially Stew Thornley’s biography of Roberto Clemente, David E. Skelton’s biography of Max Surkont, and Austin Gisriel’s biography of David Cole. SABR member Steven Weiner provided helpful feedback on an earlier draft of this article.

5 Clemente batted .345 in 291 career games against the Brooklyn and Los Angeles Dodgers, his best average against any opponent.

17 “O’Brien Twins to Rejoin Pirates Late Next Week: Both Slated for Army Discharge; Out to Win Back Infield Positions,” Pittsburgh Post-Gazette, June 1, 1955: 22.