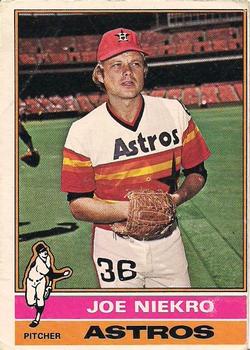 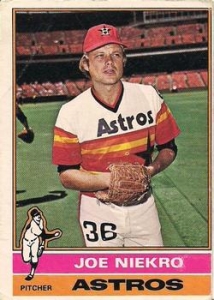 On May 29, 1976, when brothers Joe and Phil Niekro opposed each other as starting pitchers for the fifth time in their careers, Joe celebrated one of his career highlights. But this memorable game had less to do with his pitching and more with his batting. Joe hit his only career home run – off his brother.

Joe, 5½ years younger than Phil, made his major-league debut with the Chicago Cubs in 1967. Phil’s debut came with the Milwaukee Braves in 1964. The first time they drew starting assignments against each other was in the first game of a doubleheader on July 4, 1967, with Phil getting the winning decision. Joe recorded wins in their next two outings against each other, on April 23, 1968, and July 13, 1969. Phil got the win in their fourth confrontation, on September 26, 1969.

Phil had already won 145 career games with the Braves prior to 1976, but also had accumulated 122 losses on his ledger. He had second- and third-place finishes in National League Cy Young Award voting in 1969 and 1974 respectively. On the other hand, Joe had bounced around with the Cubs, Padres, Tigers, and Braves before landing with the Astros in 1975. He had a 64-67 record in nine seasons before 1976.

Both brothers used the knuckleball extensively in their pitch repertoire. Phil set the modern-day standard for knuckleball pitchers. One of the players he taught the baffling pitch to was Joe when they spent two seasons as teammates with Atlanta in 1973 and 1974. Joe said in 1985, “The knuckleball is the reason I’m still here. I’m a completely different pitcher [because of it]. I was originally a fastball-slider pitcher. Now I’m a knuckleball pitcher.”1

Joe was not unlike most other major-league pitchers when it came to hitting; getting on base is considered a bonus when pitchers bat. Through his first nine seasons, he had a batting line of .158/.217/.195 in 376 plate appearances. He delivered an occasional extra-base hit (10 total) but had never hit a home run.

Joe wasn’t off to a good start for the Astros in 1976. He lost five of his first six decisions as a starter. After two games in a relief role, he won his second game as a starter on May 20. Phil had taken three consecutive losses for the Braves, after winning his first three decisions.

Going into the game on May 29 – when the respective rotation slots for the 31-year-old Joe and 37-year-old Phil lined up – the Astros and Braves were in fourth and fifth place in the NL West respectively. Houston had won only seven games to that point in May, while the Braves were still trying to recover from a 12-game losing streak between April 26 and May 9.

Before a nighttime crowd of 11,238 at Atlanta-Fulton County Stadium, the Braves got on the scoreboard with two unearned runs in the bottom of the first inning. A passed ball, wild pitch, and two errors by first baseman Bob Watson contributed to runs scored by Rowland Office and Jim Wynn, who had spent the first 11 seasons of his career (1963 to 1973) with the Astros.

Houston got a run back in the second. José Cruz walked with one out and Ken Boswell followed with a single. Cruz moved to third when Skip Jutze hit into a force at second. Phil then attempted to pick Jutze off first; when Darrell Evans dropped the throw, Cruz scored.

Phil was in and out of trouble in several innings, but the score remained 2-1 until the top of the seventh. With one out, Joe hit his first major-league home run over the left-field wall to tie the game.

The Astros scored twice in the eighth, including the eventual winning run against Phil, on a walk to César Cedeño, a double by Cruz, and a single by Boswell. Wynn’s home run in the bottom of the inning cut the deficit to one run, but Ken Forsch closed out the game for the Astros with his ninth save, preserving a 4-3 victory.

Joe claimed his third win by pitching eight innings, giving up only one earned run on four hits, and striking out six. At one point, he retired 15 straight batters. Phil gave up nine hits in 7⅓ innings and took his fourth loss. Phil said after the game, “Joe pitched a good game. Much better than I did. He threw strikes. I was in trouble all night. He had it going, I didn’t.”

It turned out to be the only home run of Joe’s 22-year career, and it came as a surprise to him. Joe said, “It was a knuckleball. I didn’t know it was going. I knew I hit it good though. When I got to first, Bob Lillis (first-base coach) said it was a home run, and I almost missed the bag. I couldn’t believe it.”2

Joe’s teammate Forsch, joked, “Phil will never be able to eat Thanksgiving dinner with the family without having to listen to Joe talk about that game.” With a bit of swagger, the next day Joe quipped, “What time is batting practice?” 3

Joe’s feat marked only the third time since 1900 that a player hit a home run off a brother. Cleveland’s George Stovall did it against his brother Jesse of the Detroit Tigers on October 7, 1904, and the Red Sox’ Rick Ferrell homered against his brother Wes of the Cleveland Indians on July 19, 1933.4 Forty-five years after Joe Niekro’s round-tripper against Phil, Cleveland’s Bradley Zimmer homered off his brother Kyle of the Kansas City Royals on September 27, 2021.5

The Niekro brothers went on to face each other four more times during their careers.6 Overall, Joe held the edge with five wins to Phil’s four. In their game against each other in 1979, Phil won his 20th game of the season, while Joe had won his 20th four days earlier.

Joe told George Vass in a 1980 Baseball Digest article, “Phil’s a great pitcher and a great man. I’m proud of him and proud of having the same name. And any time I pitch against him it’s a game I’ll never forget.” Despite the game in which he homered against Phil, Joe said his first game against Phil in 1967 was his greatest thrill.7

During all of their nine contests, Phil never countered with a home run off Joe. However, he compiled the higher batting average when the brothers faced each other, .316 to .111.

Throwing the knuckleball as a primary pitch contributed to the Niekros’ longevity in the majors. Joe retired after the 1988 season at age 43. His brother had ended his career the year before at age 48 and was elected to the Baseball Hall of Fame in 1997.

The author expresses his appreciation to Tom Ruane for providing the complete list of games in which major-league brothers matched up as starting pitchers, as of December 22, 2021.

In addition to the sources in the Notes, the author consulted: