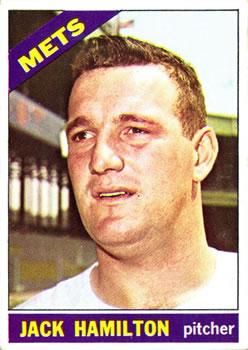 The New York Mets arrived in St. Louis after losing an exhibition game to their Jacksonville farm team on May 2. New York managed to keep the Triple-A Suns hitless but still lost the rain-shortened game. The Jacksonville team was loaded with future Mets including Tom Seaver, Bud Harrelson, and Greg Goossen. Despite needing some help on their roster, the Mets, now in their fifth season of existence, didn’t take any of their promising minor leaguers with them to St. Louis. Mets manager Wes Westrum said, “I don’t think that we will make a move here. At least right now. … You only have so many chances to make changes and you want to have your roster ready when the chance comes.”1

The series in St. Louis was New York’s final visit to the original Busch Stadium, known for many years as Sportsman’s Park. The Cardinals were scheduled to open their new Busch Stadium on May 12 against the Atlanta Braves. On May 3 the Mets lost to the Cardinals, 5-2, in the first game of the series, and fell a half-game behind St. Louis into eighth place in the National League.

The Cardinals sent Ray Sadecki to the mound for the second game. Sadecki had won his previous two starts and owned an 0.98 ERA for the young season. His start would also turn out to be his last game for the Cards: He was traded to the San Francisco Giants for Orlando Cepeda four days later.

The Mets wasted no time in jumping on Sadecki. Eddie Bressoud led off with a single. Roy McMillan reached first when Bressoud was retired on a force out at second. With two outs, Sadecki walked Jim Hickman. This brought up Ron Swoboda, who was batting just .120. But Swoboda lined Sadecki’s third pitch into the left-field bleachers to give the Mets a three-run lead. It was his first home run of the season.

Jack Hamilton was given the starting nod for the Mets. The 27-year-old Hamilton, who was born and still lived in Iowa, began his career with the Cardinals. He was originally signed at a tryout camp in 1957. “There were a lot of kids there but I think that only two of us signed contracts,” he said after the game.2

After four years in the Cardinals system, Hamilton was released when he failed to control his pitches. Cardinal coach Joe Schultz said of Hamilton, “Jack could always throw hard but he was too wild.”3 He would spend the next few years in the Phillies and Tigers organizations before being bought by the Mets in October 1965.

Cardinal manager  Red Schoendienst remarked on Hamilton’s speed, “He could throw a ball through a brick wall.” Schoendienst said he was impressed when Hamilton never wore a sweatshirt on the mound, no matter the weather. When Hamilton was asked about this he said, “I feel looser and more comfortable without one. Besides, I’m superstitious. I quit wearing a sweatshirt two years ago and I’ve been pitching a lot better ever since.”4

Hamilton entered the game as the team leader in victories (two). His last appearance had been on April 26 when he pitched 6⅓ innings to defeat the Chicago Cubs.

Hamilton shut down the Cardinals through the first two innings. Not a single ball left the infield. St. Louis got its first baserunner in the third when Sadecki dropped a bunt down the third-base line and barely beat out third baseman Ken Boyer’s throw. Boyer later told reporters, “Are you going to tell me that if I knew how to play the hitters that Hamilton would have had a no-hitter? If he’s got a no-hitter going in the late inning I might have guarded the line. But a bunt was the furthest thing on my mind in the third inning.”5

After Sadecki, Hamilton walked Lou Brock but struck out Alex Johnson for the third out. It would turn out to be the closest the Cardinals would get to scoring a run.

Asked after the game if he was bothered by Boyer’s inability to field the bunt, Hamilton said, “No, I’m not angry about the bunt. It came so early it didn’t bother me. But I started thinking about it in the eighth.”6

The Mets built on their lead with the help of Cardinals errors in the second. Billy Murphy walked with one out. Sadecki attempted to pick him off but an error by first baseman Tito Francona pushed him to second instead. With two outs Bressoud singled and Murphy scored. Bressoud took second on the throw to the plate; when catcher Pat Corrales threw errantly to second, Bressoud advanced to third. After Sadecki walked McMillan, Boyer singled to plate Bressoud. The Mets now led 5-0.

In the fourth, Bressoud, who hadn’t had a hit in his previous nine at-bats, struck again. This time he homered over the center-field wall to push the Mets’ lead to six runs.

Cardinals errors led to two more runs in the eighth. Tracy Stallard was now on the mound for St. Louis after replacing Sadecki in the seventh. Hickman led off with a single. Catcher Corrales tried to pick him off but his throw was wild and Hickman reached third.

Ed Kranepool was walked intentionally, putting runners at the corners. Corrales tried to pick off Hickman again. Again his throw missed the mark. Corrales picked up his second error of the inning and third of the game; Hickman scored while Kranepool advanced a base. Stallard then hit Jerry Grote.

When Johnny Lewis, a left-handed batter, pinch-hit for Billy Murphy, Stallard was replaced by Hal Woodeshick. The Mets recalled Lewis and sent up Ron Hunt in his place. Hunt hit a groundball down the first-base line. Francona, starting his first game of the season, couldn’t handle the ball and he was charged with his second error of the game. Hunt reached first while Kranepool scored the eighth and final Mets run. Woodeschick got the next two batters out to keep the Mets from adding to the Cardinals’ woes.

Hamilton kept the Cardinals in check after their mild threat in the third: St. Louis managed to hit just hit four balls out of the infield the rest of the way. After Hamilton shut down the Cardinals on a pair of groundouts and a fly ball to center in the ninth, he became the second Met to throw a one-hitter after Al Jackson’s win against the Colt .45s on June 22, 1962, in the Mets opening season.

Mets catcher Jerry Grote said of Hamilton, “I caught him last winter when he threw a no-hitter in the winter league but I’ve never seen him throw harder. He was stronger after the sixth inning and could have gone another five innings if he had to.”7 Hamilton’s win, his third, gave him the club lead in wins.

The Mets victory was the 200th in the team’s history. It also pushed New York into seventh place in the National League, a half-game ahead of the Cardinals. Hamilton’s performance tied the Mets record with four wins on a road trip.8

Hamilton said of Sadecki later, “You cost me a lot of money.” Neal Russo of the St. Louis Post-Dispatch, wrote that Hamilton “was referring to the thousands of dollars he most likely would have collected in New York as the first Met to pitch a no-hit no-run game. Television shows and endorsements would have brought the loot.”9

The Iowa-born Hamilton left this clubhouse in a hurry. His two sisters and a brother had driven from Iowa to see him pitch. They were waiting for him outside the ballpark and eager to hear about the win. No doubt there was much to celebrate.