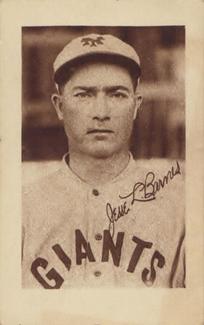 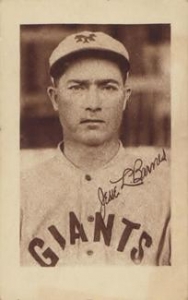 Shortly before the start of Game Six of the 1921 World Series, with the New York Yankees leading the New York Giants three games to two in the best-of eight series, Babe Ruth arrived at the Polo Grounds with his arm in a sling and wearing civilian clothes. Ruth had lacerated his elbow in Game Two and infected the wound sliding into third base in Game Three. Ruth did not start Game Four but hit a pinch-hit home run in the ninth inning. Though Ruth’s infected elbow continued to get worse, he did play Game Five, in which he managed a bunt single and scored from first on Bob Meusel’s double.

As inspiring as Ruth’s play was, it was apparent that he was physically in bad shape. After Game Five, the Yankees’ team physician warned that if Ruth continued to play with his infected elbow, he could risk losing his arm.1

Upon Ruth’s arrival prior to Game Six, he was greeted by a throng of reporters and received a standing ovation from the 34,283 fans in attendance. Umpire George Moriarty would not permit Ruth in the Yankees dugout since he was not in uniform, so Ruth watched the game from the press box. “It isn’t often that I have been able to view a game from this angle, and I can’t say that I relish it very much,” he said. “I would rather be in there playing.”2

The teams shared the Polo Grounds (the Yankees were the Browns’ tenants), and the Yankees were the home team for this game. Both managers had to reach deep into their rotations, well beyond their “top two.” In spite of Fred Toney’s poor start in Game Three, when he was pulled after allowing four runs with none out in the third inning, Giants skipper John McGraw chose to start Toney again, on three days’ rest. Miller Huggins turned to southpaw Harry Harper, of whom New York Globe sportswriter Sid Mercer once wrote, “the Hackensack left hander is temperamental. He is a most self-conscious boxman [pitcher] and is inclined to loss of aplomb and control when things are breaking badly for him.”3

The Giants were scoreless in the top of the first. Chick Fewster, who replaced Ruth in left field, led off the bottom of the inning with a walk. Back-to-back singles by Elmer Miller and Meusel scored Fewster, giving the Yankees a 1-0 lead. Meusel took second on George Burns’ unsuccessful attempt to throw out Miller going to third.

Aaron Ward’s single up the middle plated Miller and Meusel, stretching the Yankees’ lead to three runs. McGraw pulled Toney after only two-thirds of an inning. In came Jesse Barnes, who had also provided solid relief for an ineffective Toney in the Giants’ Game Three victory. Mike McNally’s fly ball to right field ended the Yankees’ threat.

Yankees pitcher Harper did not handle prosperity well. He walked High Pockets Kelly to lead off the top of the second. Irish Meusel cracked a line drive over brother Bob Meusel’s head and into the right-field grandstand, cutting the Yankees’ lead to one run at 3-2.

Huggins had Bob Shawkey warming up in the bullpen after Irish Meusel’s home run. After Johnny Rawlings flied out to center field, Frank Snyder’s shot into the left-field bleachers knotted the game, 3-3. Barnes followed with a single on a short fly to center that dropped just in front of Miller’s attempt at a shoestring catch.

That was all for Harper. Huggins called on Shawkey from the bullpen. Shawkey promptly surrendered a single to Burns, putting runners on first and second with one out. But Dave Bancroft’s foul tip landed in Wally Schang’s mitt for strike three and out number two, and Frankie Frisch flied out to right field for the final out.

After Schang looked at strike three to lead off the bottom of the second, Shawkey singled to left field. Fewster knocked a two-run homer into the left-field bleachers – the third home run of the game in less than two innings – giving the Yankees a 5-3 lead.

After an uneventful third inning, the Giants’ attack began in the fourth with back-to-back singles by Snyder and Barnes. Burns reached safely on an errant throw by second baseman Ward on a grounder to third, loading the bases for the Giants with no outs.

Bancroft’s single to left scored Snyder and Barnes, tying the game, 5-5. While Burns advanced to third on the throw home, Bancroft remained anchored at first. Frisch’s grounder to shortstop forced out Bancroft but plated Burns for a 6-5 Giants’ lead. After stealing second, Frisch scored on Kelly’s single, extending the Giants lead to two runs. Kelly was thrown out attempting to steal second base for the third out.

Before the start of the sixth inning, words were exchanged between umpire Moriarty and Giants backup catcher Earl Smith. As Moriarty was adjusting his facemask, Smith shouted, “What’s the idea of the mask, George? Is it a disguise?” While Moriarty seemed to ignore Smith’s insult, it seemed the final straw was when Smith asked, “Who’d you get to do your countin’ if there were no such thing as indicators?” to which Moriarty shouted “Out – out – out of here!”4

Bancroft led off the top of the sixth by slapping a single between third base and shortstop.  Frisch’s walk gave the Giants runners on first and second with no outs. With a full count on Ross Youngs, Bancroft and Frisch tried a double steal. Youngs swung and missed for strike three, while Schang’s throw to third nabbed Bancroft for a strikeout, throw-out double play. But Kelly grounded a single up the middle, scoring Frisch from second to give the Giants an 8-5 lead. There was no more scoring. The Giants were one win from their first World Series championship since 1905.

While plenty of Giants hitters contributed on offense, Barnes was the real hero for the Giants, throwing 8⅔ innings of excellent relief work. After surrendering the two-run homer to Fewster in the second inning, Barnes shut out the Yankees on only two more hits for the rest of the game – none after Schang’s leadoff single in the bottom of the sixth – and struck out 10.  “He had a world of stuff on the ball, and his control was fine,” declared Snyder, who caught Barnes. “I could have sat in a chair behind the plate and handled his pitches. That’s how good he was.”5

In addition to the sources cited in the Notes, the author accessed Retrosheet.org, Baseball-Reference.com, Back To Baseball, SABR.org, and The Sporting News archive via Paper of Record.