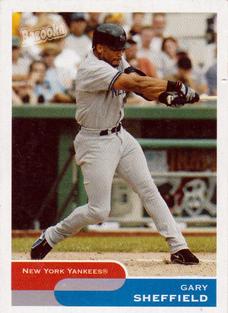 Red Sox fans were used to their team coming up short against the Yankees. Just the year before, Boston had lost the 2003 American League Championship Series to the Yankees in the 11th inning of the seventh game — after seeming to have been on the verge of winning the game (and their first pennant since 1986). The Red Sox had also lost the pennant to the Yankees on the final game of the 1949 regular season and lost a single-game playoff to determine the winner of the American League East in 1978. In 1999 the Yankees beat Boston in the ALCS, four games to one. The Yankees had won 26 world championships since the Red Sox had last won one, back in 1918. It really seemed that it would be more of the same when the Yankees prevailed in the first game of the 2004 ALCS.

Curt Schilling has one of baseball’s best postseason records, but this game was the worst of the 19 playoff games he pitched in his career.1 Red Sox manager Terry Francona had good reason to name him to start; he was 21-6 in the regular season, leading the major leagues in wins. He had been named co-MVP (with Randy Johnson) of the 2001 World Series against these very same Yankees. He had one-hit the Yankees in seven innings at Yankee Stadium on September 26 for his 21st win.

In 2004 the Yankees had won 101 regular-season games, three more than the wild-card Red Sox. They had beaten the Twins in four games and the Red Sox had swept the Division Series from the Angels. The two rivals were back at it again — Red Sox versus Yankees.

New York skipper Joe Torre picked Mike Mussina as his starter. Mussina had lost Game One of the Division Series, a 2-0 shutout by Johan Santana. Mussina himself had pitched an excellent game, giving up just the two runs in seven innings. In this game — Game One of the ALCS — he shut out the Red Sox for six innings, while seeing his team run up an 8-0 lead.

Schilling was dealing with a serious injury he’d suffered in the Division Series. He’d torn a sheath in his right ankle that held one of the tendons in place. “The displaced tendon was sliding across the outside of the bone during his pitching motion, causing pain and a distracting clicking sound. The Red Sox had not disclosed the true extent of Schilling’s injury.”2 Recalling the moment years later, Schilling said he was taking the painkiller Marcaine but was still badly hampered. “I knew it before the game when I hit the top step [of the dugout] to head to the bullpen. I felt the tendon roll over the bone. I was like, ‘Aw, this is not going to be good.’ It wasn’t the pain as much as it was the awkwardness of the feeling. I could hear it pop and feel it roll over. With every pitch I was anticipating hearing it and feeling it. It was throwing a wrench into the middle of my mechanics. I was adjusting physically to pitching with it, but I was afraid of blowing my arm out. … I knew five pitches in that I was in trouble.”3

Schilling got Derek Jeter and Alex Rodriguez to fly out to right field, both of them hitting the ball fairly deep, but then Gary Sheffield doubled into the left-field corner, Hideki Matsui drove in Sheffield with a two-base hit that fell in front of, and then eluded, Manny Ramirez in left-center, and Bernie Williams grounded past second base and through to right-center field, scoring Matsui. Jorge Posada grounded out to end the inning, but the Yankees had a 2-0 lead.

It was a lead they built on in the bottom of the third. Jeter singled, A-Rod singled, and Sheffield walked. Matsui lined a double off the wall in the right-field corner, clearing the bases. Matsui moved up to third on a groundout, then scored to make it 6-0 when Posada hit a sacrifice fly to center.

Schilling didn’t come out in the fourth.4 It was his shortest stint in all of 2004.

Meanwhile, Mussina struck out the side in the fourth inning, and had struck out six of seven batters at one point. In fact, he set down every one of the first 18 batters he faced, a perfect game through the first six innings. The Red Sox had hit only two balls out of the infield through the first five innings.

The Yankees added two more runs in the bottom of the sixth when Kenny Lofton led off with a homer off Tim Wakefield, inside the foul pole in right. Sheffield doubled with two outs and Matsui drove him in, and it was 8-0.

Mussina struck out Johnny Damon, the first batter up in the Red Sox seventh and his eighth strikeout of the game, but Boston batters seemed to finally get him in their sights. Mark Bellhorn doubled to the base of the wall in left, and David Ortiz dropped a single into right field. With two outs, Kevin Millar doubled to left, the ball sailing over Matsui’s head and glancing off his glove, scoring both runners. Trot Nixon singled to center, scoring Millar. Joe Torre called in Tanyon Sturtze to relieve Mussina. Jason Varitek’s home run landed several rows deep into the right-field bleachers and suddenly New York’s lead had been cut to three runs, at 8-5.5

The Yankees went scoreless against Boston’s fifth reliever, Alan Embree. Tom Gordon took over relief duties for the Yankees in the top of the eighth. Bill Mueller singled. Gordon got two outs, but then Manny Ramirez singled. And David Ortiz tripled to left field, driving both teammates in. He’d hit it very deep but Matsui “overran the ball, twisting in midair to get a glove on it at the warning track. But the ball popped loose.”6 The Red Sox had crept to within one run, 8-7.

But they could come no closer. Mariano Rivera came in and — with the potential tying run at third base — the future Hall of Fame closer got the final out in the eighth. Bernie Williams knocked in two insurance runs in the bottom of the eighth with a double off Mike Timlin. Rivera gave up a pair of singles in the ninth (again the tying run was at the plate) but snuffed out the Red Sox threat.7

The Yankees had won Game One and the Red Sox seemed to have lost their ace. “It was a tough game to lose,” said Manny Ramirez. “But at least we let them know that we can come back at any time.”8 Bernie Williams said of the Red Sox (who had dubbed themselves “the Idiots”), “They might be joking around all the time, but that team is no joke. They can come back with the best of them.”9

2 Allan Wood and Bill Nowlin, Don’t Let Us Win Tonight: An Oral History of the 2004 Boston Red Sox’s Impossible Playoff Run (Chicago: Triumph Books, 2014), 67. Thanks to Allan Wood for his comments on this article.

4 It wasn’t that he was in pain; that was part of the problem. He just couldn’t plant his foot correctly, and hearing the tendon snapping was extremely distracting. For more, see Dave Anderson, “Schilling Says Ailing Ankle Limited Him,” New York Times, October 13, 2004: D1.

7 Rivera had arrived at the ballpark after the game had begun, having returned from his native Panama and the funerals of two relatives who had died in a swimming pool. “I had 24 players that were waiting for me,” he said. “I had a job to do.” See Jack Curry, “Journey Is Long for Rivera in Every Way,” New York Times, October 13, 2004: D1, and Harvey Araton, “A Sure Thing? It Sure Isn’t Schilling,” New York Times, October 13, 2004: D1.