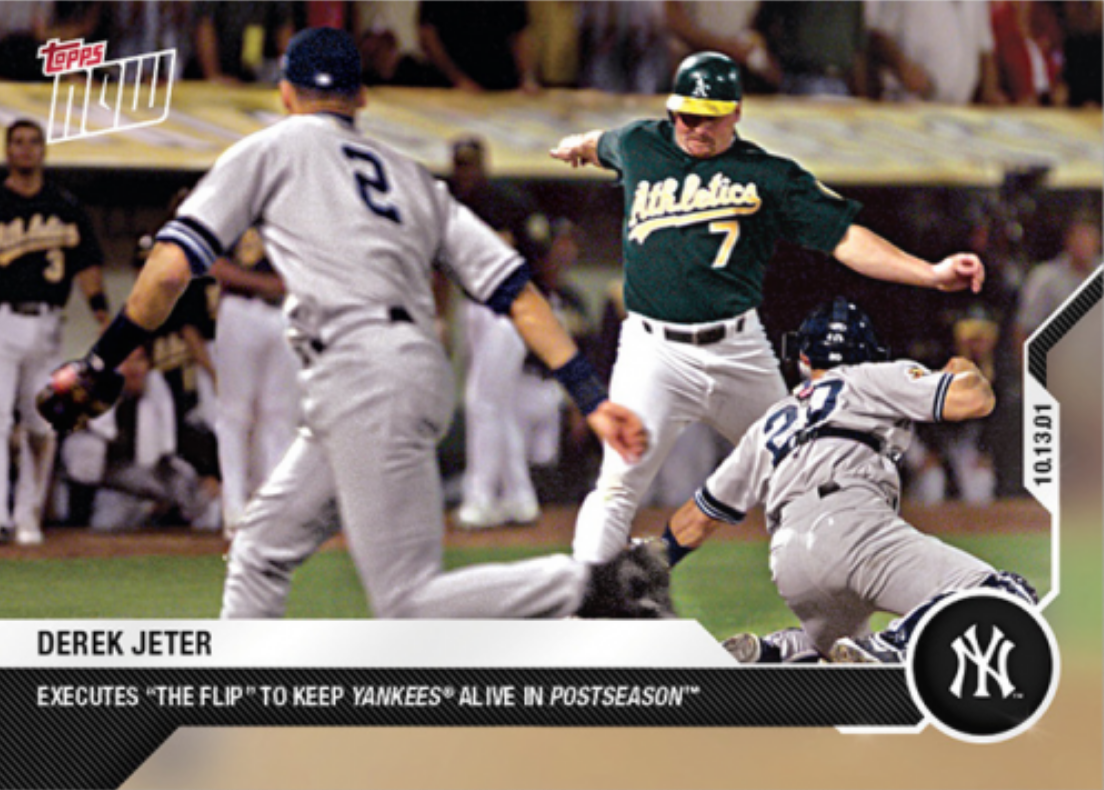 With the New York Yankees clinging to a 1-0 lead in Game Three of the 2001 American League Division Series and facing elimination if they lost, Derek Jeter made arguably the most iconic play of his career, running across the field to flip an overthrown relay to catcher Jorge Posada and get Jeremy Giambi at the plate. The play preserved the Yankees’ slim lead and helped to ensure that they lived to fight another day against Oakland.

The Yankees and A’s were meeting in the best-of-five ALDS for the second year in a row. In 2000, the Yankees beat Oakland in a decisive Game Five en route to their third consecutive World Series victory and fourth championship in five years. The 2001 Yankees featured many of the same players — including Jeter, Posada, Bernie Williams, Scott Brosius, Tino Martinez, Chuck Knoblauch, Paul O’Neill, Andy Pettitte, Orlando Hernandez, and Mariano Rivera — that had won three titles in a row

The 2001 Oakland A’s started the season slowly and were 21 games behind the division-leading Seattle Mariners after 81 games. Reigning AL MVP Jason Giambi, the team’s best player, and outfielder Johnny Damon and closer Jason Isringhausen were set to become free agents after the season. The question for Oakland was whether they would sell off their soon-to-be free agents. Instead, the A’s bought and added outfielder Jermaine Dye. Over the season’s final 81 games, the A’s went 63-18 to secure the AL wild card.

Seeking to advance past New York this time, Oakland won the first two games of the series at Yankee Stadium behind the pitching of Tim Hudson and Mark Mulder. Returning home to the Bay Area, Oakland needed only one win to advance to the Championship Series.

The A’s handed the ball to Barry Zito, the third member of its vaunted “Big Three.” Zito, a 23-year-old left-hander, was in his second major-league season. After a solid rookie campaign, he had struggled through the first two-thirds of the 2001 campaign: Following a July 24 start against Minnesota, Zito was 6-7 with a 5.01 ERA. Yet he entered the postseason as the hottest pitcher in baseball, coming off a stretch in which he went 11-1 with a 1.32 ERA. In the Oakland locker room, Zito was known as an eccentric. “That’s one weird character,” said fellow pitcher Gil Heredia.1

Mike Mussina received the start for New York. Mussina signed with the Yankees before the 2001 season after 10 years with Baltimore. He had one of the best seasons of his Hall of Fame career in 2001, going 17-11 with a 3.15 ERA. And in early September, Mussina was only a strike away from a perfect game.

Facing elimination by Oakland, Yankees manager Joe Torre changed his lineup, inserting Randy Velarde and Shane Spencer in place of Paul O’Neill and David Justice. The benching of O’Neill, a key piece of the dynasty playing his 17th and final season in the majors at age 38, was especially noteworthy, but O’Neill took the benching in stride. “This isn’t the time of year to wait for someone to start swinging the bat well,” he said.2

A crowd of 55,861 filled Network Associates Coliseum, hoping to see the end of the Yankees’ reign. They were treated to a pitchers’ duel between two high-level starters. Zito and Mussina traded zeroes the first four innings. Yankees left fielder Chuck Knoblauch reached on a soft groundball booted by A’s shortstop Miguel Tejada to lead off the game. But the Yankees did not advance him. First baseman Tino Martinez was hit in the back by a Zito offering leading off the second, but Posada grounded into a double play. Zito did not allow a hit for the first four innings. In the first three innings, Mussina’s only baserunner reached on a walk. In the bottom of the fourth, Jason Giambi and Dye hit back-to-back singles with one out, putting men on first and second. Mussina got Eric Chavez to ground to first, and Martinez threw to Jeter to get Dye at second. With runners on first and third, Mussina faced Jeremy Giambi. He got Giambi to ground out to end the inning.

The Yankees scored the only run of the game in the fifth. After Martinez lined out to center, Jorge Posada stepped in. On a 1-and-0 pitch, Posada hammered a Zito fastball over the left-field scoreboard to give the Yankees their first lead of the series. “I was trying to stay back,” said Posada.3 The pitch was a mistake: A’s catcher Ramon Hernandez was looking for it inside.4 On the next pitch, Spencer doubled to left. But Zito retired the next two men on fly outs to center field.

Staked to a one-run lead, Mussina retired the next eight men in a row until Jeremy Giambi singled to right with two out in the seventh. In the Oakland dugout, manager Art Howe considered running for the slow Giambi but decided he would wait until Giambi was in scoring position.5

The next batter was outfielder Terrence Long, who had hit two home runs in Game One. On a 2-and-2 pitch, Long slashed a ball past Martinez and into the right-field corner. Spencer retrieved the ball as Giambi lumbered around the bases. A’s third-base coach Ron Washington waved Giambi home. Spencer threw the ball toward the infield but overthrew the cutoff men. Watching from the dugout, Paul O’Neill was certain Giambi would score.6

But out of nowhere appeared Jeter. Racing across the diamond, Jeter grabbed the overthrown ball on the run and flipped it, in a manner like a lateral in football, to Posada for the tag on Giambi, who didn’t slide. Both Jeter and Posada pumped their fists as the Yankees preserved their one-run lead. “I [didn’t] have time to turn around and set up and throw,” said Jeter. “You’ve got to make the quickest play possible.”7

After Zito retired the Yankees in order in the top of the eighth, Torre turned the game over to closer Mariano Rivera. With one out, pinch-hitter Greg Myers singled to center. The lineup turned over, but Rivera got Damon and Tejada to escape any damage in the eighth. In the ninth, Rivera gave up a one-out double to Jermaine Dye. Eric Chavez was due up next. Rivera struck him out.

With two out and the tying run on second, Jeremy Giambi stepped in to face Rivera. Giambi, who had been the victim of Jeter’s flip, had a chance to make that play a footnote. But, on a 1-and-1 pitch, Giambi hit a soft groundball to second. Alfonso Soriano fielded it cleanly and threw to Martinez at first for the final out of the game.

One hit and one brilliant defensive play in tandem with superb pitching from Mussina and Rivera were all the Yankees needed to beat the Athletics in Game Three. Zito, who made only one mistake, went eight innings and allowed only two hits. It turned out to be his final appearance of the season. A day later, Bernie Williams’s five RBIs led the Yankees to a series-tying 9-2 win, and New York completed its comeback with a 5-3 victory at Yankee Stadium on October 15. The Yankees won their fourth AL pennant in five seasons by beating the Mariners in the ALCS but lost the World Series in seven games to the Arizona Diamondbacks.

In addition to the sources cited in the Notes, the author used the Baseball-Reference and Retrosheet websites for statistics and team information.