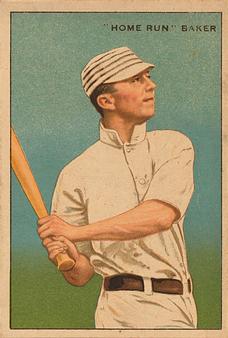 “Mighty Baker Pulls Another Home Run Hit,” squawked the headline on the front page of the Philadelphia Inquirer on October 18, 1911, after Game Three of the World Series.1 The story behind the headline comes from one of baseball’s all-time great World Series matchups. Baseball’s first two dynasties, the New York Giants and the Philadelphia Athletics, under the sport’s grand masters of strategy, managers John McGraw and Connie Mack, respectively, met for the first time since 1905. It was also a confrontation of the game’s greatest pitcher, New York’s Christy Mathewson, versus the game’s top emerging young hitters, Philadelphia’s Eddie Collins and Frank Baker.

Baseball historians have consistently debunked the myth that John Franklin Baker first earned his eponym “Home Run” after he swatted game-changing round-trippers in back-to-back games of that World Series against the Giants.2 News accounts as early as 1909, Baker’s first full season in the major leagues, had used the nickname in describing one of Mack’s heralded young Philadelphia Athletics. But the hundreds of stories that ran in newspapers around the nation in October 1911 – including the front pages of most major dailies, alongside photos and caricatures of him, detailing his home runs – solidified Baker’s legend.

With the World Series tied at one victory apiece, the rebuilt Polo Grounds attracted 37,216 fans that wet and chilly Tuesday for Game Three, which figured to be a pitchers’ duel.3 McGraw handed the ball to the 31-year-old Mathewson, who had won Game One. During the regular season, Matty had earned 26 of the pennant-winning Giants’ 99 victories while posting a league-best 1.99 ERA. Mack started his 28-year-old ace, Colby Jack Coombs, who had amassed 28 of the A’s 101 victories in 1911 to lead the American League in that category. The previous year, Coombs had led the A’s to the championship by beating the Cubs three times in the World Series.

Mathewson had secured his place as the best pitcher in the major leagues during the previous decade. From 1901 to 1909 Mathewson compiled a record of 263 wins and 118 losses. In the 1905 World Series against a Mack-led A’s squad, Mathewson had pitched three shutouts to secure the championship for the Giants.

Game Three of the 1911 Series delivered on its promise of a duel. Neither hurler allowed a baserunner over the first two innings. Athletics shortstop Jack Barry got the game’s first hit when he singled in the top of the third. After stealing second, he was doubled off the bag on a lineout.

The Giants got on the board first in the bottom of the third. Catcher Chief Meyers reached first on a hard grounder to third baseman Baker. Mathewson helped his cause by singling to right, which moved Meyers to third. And an infield tap to short by Giants left fielder Josh Devore scored Meyers to give the Giants a 1-0 lead.

The A’s picked up several hits over the next five innings, but the Giants defense kept them off the scoreboard, recording outs at the plate in the fifth and eighth. Although the home crowd tried to rattle Coombs, he pitched flawlessly, allowing just two hits in nine innings.4

With one out in the top of the ninth inning, the score remained 1-0 in the Giants’ favor as Baker stepped into the batter’s box. The lefty-hitting infielder was a fearsome hitter – he had batted .334 that season, with 115 RBIs, and a major-league-leading 11 home runs in 148 games. The nearly 6-foot, 170-pounder swung a huge 52-ounce bat, an antiquated presence in an era when most players choked up and hit with shortened strokes.5 He had been the hero in Game Two, taking Giants pitcher Rube Marquard deep in the sixth inning for a two-run home run that sealed the home victory for the Mackmen.

On that Tuesday afternoon in the Polo Grounds, you could not have invented a better, more fairy-tale moment. Damon Runyon, then a New York sportswriter, captured it:

Baker’s appearance revived the Quakers a little. They recalled his home run slash off Marquard on Monday. The Giant infield shuffled about uneasily, while the outfielders dropped back toward the distant walls. Mathewson had handled the Marylander carefully throughout the afternoon and he maintained his caution as he dealt with the slugger on this occasion, but caution went astray somewhere.

One strike and two balls had been laid across the plate by “Big Six” when he dropped in a thigh-high, slanting shoot and Baker pulled upward on it with that powerful swish of the bat which carries enormous driving power. A gray dusk was drifting in over the big bowl, and it was hard to follow the ball with the eyes. With the sharp crack of the bat meeting the ball the thousands of spectators rose to their feet and gazed around dully for an instant, unable to immediately discover the course of the drive.

Then the ball broke through the mist, climbing upward like a golf ball leaving the tee and flying into the mass of humanity banked in the right field stand.

The thousands of Philadelphians in the stand gave Baker a wild greeting as he trotted slowly around the diamond, and even the rabid New York fans had to join in, for the home run drive when hope is dead is, after all, the big spectacular play of baseball.6

After Baker’s heroics, Coombs quickly took care of the Giants in the bottom of the ninth. He struck out Mathewson, got Devore, the Giants leadoff man, to pop out to third, and then struck out second baseman Larry Doyle.

In the 10th, Mathewson set down the A’s one-two-three. In the bottom of the inning, Fred Snodgrass leaned into Coombs’ first pitch, but umpire Bill Brennan refused to allow him to take his base. Snodgrass walked three pitches later. Right fielder Red Murray hit his first pitch back to Coombs, inducing a fielder’s-choice groundout, which allowed Snodgrass to move to second. On a short passed ball, Snodgrass took off for third. But A’s catcher Jack Lapp recovered quickly and zipped the ball to Baker, about 15 feet ahead of Snodgrass. Snodgrass leaped spikes first and ripped into Baker, shredding his uniform, but was called out on the play.7 Giants first baseman Fred Merkle walked but was later thrown out trying to steal second to end the inning.

Collins lined a Mathewson curve to left for a single with one out in the top of the 11th. Baker followed with a sizzler to third for another single; when Merkle missed the throw to first, Collins moved to third and Baker to second on the error. Art Fletcher bobbled right fielder Danny Murphy’s grounder to short for another error, and Collins scored the go-ahead run. A’s first baseman Harry Davis sent Matty’s first pitch to right for a single, scoring Baker for a 3-1 lead, which Philadelphia took to the bottom of the 11th.

With the Giants down to their last three outs, second baseman Buck Herzog led off the 11th with a double. Coombs retired Fletcher on a fly to left for the first out. Meyers nearly tied the contest when he smashed a pitch into the left-field bleachers, but it was foul; he grounded out on the next pitch.8 Herzog scored when Collins mishandled a grounder by Beals Becker, who pinch-hit for Mathewson. But Becker was thrown out trying to steal second by Lapp, ending the game and sealing the 3-2 win for the A’s.9

Ty Cobb, who was in the press box writing analysis for The Tennessean and American newspapers, summed things up thusly:

The feature of today’s game was Baker’s sensational home run. Greater was this crisis that faced him today because it was produce then or lose for the Athletics. But like yesterday he rose to the occasion, refusing to bite at the tantalizing and quick breaking low curve ball delivered by Mathewson, and waited patiently like the stalking tiger. When his victim paused for a breathing spell, which was when “Matty” in the hole with two balls had to lay one over, then Baker stepped into this “cripple” as we ball players call it and literally smashed the ball on a dead line over the right field wall into the dense crowd in the grand stand. He trotted slowly around with the roar of applause from his admirers in his ears. This blow seemed to take the Giants off their feet.10

Weather delays pushed back the fourth game, allowing McGraw to pitch Mathewson again. It also allowed time for the production of little replica souvenir “Home Run Baker” bats with ribbons tied to them, which were sold at the next game in Philadelphia. Baker was soon inundated by companies seeking him to appear in advertisements and endorse their products.11

In Game Four, Baker doubled to start a rally, then doubled again to drive in two runs in a Philadelphia victory and a 3-1 Series lead. The Giants would win Game Five, 4-3 in 10 innings, then Philadelphia would clinch the Series with a 13-2 rout in Game Six.12

Regardless of the study of historical threads, proof points, or revisionism, it was Connie Mack who declared after Game Three, “From that minute Baker the infielder became known as Home Run Baker.”13 For his ninth-inning heroics, the moniker “Home Run” became affixed to Frank Baker throughout baseball history and for the rest of his career, including on his plaque in Cooperstown.

In addition to the Sources cited in the Notes, the author consulted the Baseball-Reference.com and Retrosheet.org websites for pertinent material and the box scores noted here.