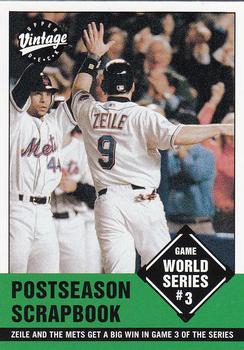 For the first time since 1956, the major leagues had a Subway Series,1 pitting the New York Yankees against the New York Mets. At the start of the season there was nothing etched in stone that would suggest the Yankees and the Mets would meet for a World Series title. The Yankees, who were trying to clinch their third World Series title in a row and fourth in five years, stumbled into October baseball after a rather long September losing streak, and a scare in the first round of the playoffs against the Oakland Athletics. The Mets were wild-card winners and if the truth be known they had an easier time making it to the Big Show than the Yankees, as they beat the Giants and the Cardinals to make it to the World Series.

In Game One at Yankee Stadium, the Yankees won on a single by Jose Vizcaino in the bottom of the 12th inning that scored Tino Martinez and gave the Yankees a 4-3 victory. This game set a record for the longest World Series game ever at 4 hours 51 minutes.

Game Two was also played at Yankee Stadium and was notable for two events. The first occurred in the first inning when Mike Piazza’s bat shattered as he struck a pitch from Roger Clemens. There was a history between the two as a pitch by Clemens had hit Piazza in the head in July. A piece of the bat bounded toward Clemens; he picked it up and threw it in the general direction of Piazza, who was running down the first-base line. Both benches cleared, but order was restored and the game resumed. (The ball struck when the bat shattered went foul.) Then in the top of the ninth inning the Mets were trailing, 6-0, and scored five runs off Jeff Nelson and Mariano Rivera to make the final score 6-5, Yankees.

In Game Three, at Shea Stadium, there was a battle of right-handers, Orlando Hernandez (known as El Duque) for the Yankees and Rick Reed for the Mets. Reed made quick work of the Yankees in the first inning, with the only issue a two-out walk to David Justice after which Bernie Williams took a called third strike. It was an even quicker inning for El Duque as he struck out the side.

In the second, Reed struck out Martinez and Jorge Posada, and gave up a two-out double to Paul O’Neill, but struck out Scott Brosius, leaving O’Neill at second base. Robin Ventura led off the Mets second with a home run for a 1-0 lead, but Hernandez struck out Todd Zeile, Benny Agbayani, and Jay Payton, giving the Cuban right-hander six strikeouts.

Hernandez struck out to open the Yankees third and Jose Vizcaino grounded out. Derek Jeter singled and scored the tying run on a double by David Justice. Williams grounded out to end the inning. For the Mets, Reed singled with one out, but was left stranded as Timo Perez flied out to left field and Edgardo Alfonzo popped out to the second baseman.

Tino Martinez led off the Yankees fourth with a single and with one out he scored on Paul O’Neill’s triple. Reed hit Scott Brosius to put runners on first and third with one out. Brosius went to second on Hernandez’s bunt (O’Neill held third) but Vizcaino was caught looking at a third strike. The Yankees had a leadoff single by Jeter in the fifth inning but could not score and the Mets could not score in the bottom of the inning after Mike Bordick hit a one-out single to center field.

In the sixth, Reed set the Yankees down in order. In the bottom of the inning the Mets tied the score. Piazza doubled on a fan interference call, Ventura walked, and Todd Zeile’s double to left field scored Piazza and sent Ventura to third base. Benny Agbayani walked to load the bases with no outs, but Hernandez got out of the inning by whiffing Payton and Bordick and getting Darryl Hamilton,2 batting for Reed, on a force-play grounder to shortstop.

Turk Wendell replaced Reed on the mound for the Mets to begin the seventh inning and struck out Hernandez and Vizcaino before walking Jeter. Through seven innings the Yankees and the Mets pitchers had combined for 22 strikeouts, three short of a World Series record.3 Dennis Cook then relieved Wendell and hit David Justice with a pitch, but ended the inning by striking out Williams.

Hernandez retired the Mets in order in the seventh. Tino Martinez walked to open the Yankees eighth. Mets reliever John Franco replaced Cook and got Posada to ground into a 5-4-3 double play. O’Neill singled to center field but was left stranded when Glenallen Hill, batting for Brosius, flied out to right field.

In the Mets eighth, Zeile singled to center field with one out and Agbayani sent him home with a double to left that gave the Mets a 3-2 lead. After the game Zeile said, “We all felt that things would be different once we got back to Shea because of how we’ve played here all season.”4 Joe McEwing ran for Agbayani. Payton singled and McEwing went to third. After Lenny Harris came to the plate to hit for Bordick, Mike Stanton replaced Hernandez on the mound for the Yankees. Bubba Trammell then batted for Harris and hit a fly ball to center field that scored McEwing. Kurt Abbott batted for Franco and struck out, but the Mets had a 4-2 lead going to the top of the ninth inning.

Mets pitcher Armando Benitez came in looking to close out the game. Chuck Knoblauch batted for Stanton and singled to give the Yankees a baserunner with nobody out. But Benitez was up to the task. He retired pinch-hitter Luis Polonia on a fly to center field and got Jeter to take a called third strike. With David Justice batting, Knoblauch went to second on defensive indifference, but Justice popped out to second baseman Alfonzo for the final out.

The defeat broke the Yankees’ 14-game World Series winning streak, the longest streak in championship play among the major sports.5 They led the Mets two games to one, but Mets manager Valentine said, “It seems like light years difference between 3-0 and 2-1. …”6

1 A Subway Series is commonly defined as one in which two teams from the same city play each other.

2 Of Agbayani, manager Bobby Valentine said, “He was not supposed to be in the lineup. We’re here because of him. He is one of the key players on the team.” Associated Press, Rochester (New York) Democrat and Chronicle, October 25,2000: 36.