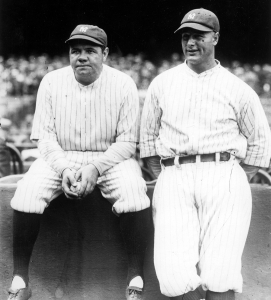 After the New York Yankees swept the St. Louis Cardinals to win the 1928 World Series, their two biggest drawing cards – Babe Ruth and Lou Gehrig – took a barnstorming tour throughout the East and Midwest over the last 20 days of October. As the schedule between the Bustin’ Babes and Larrupin’ Lous wound down, the two giants of the game found themselves entrenched in an Iowa cold snap. But little did they or anyone else know that when they took the field at Western League Park in Des Moines on October 29, there was a future baseball legend at the game who himself would set the baseball world aflame less than a decade later.

When a 9-year-old baseball fan read that Ruth and Gehrig were coming to Des Moines – some 25 miles from his family’s 320-acre farm in tiny Van Meter1 – nothing could stop the youngster from attending and fostering what became one of his favorite baseball memories.2 Little did he know, watching that exhibition matchup at the home of the recently rebranded Class A Des Moines Demons3 might as well have been a view into a crystal ball that showed visions of his own major-league future.

“The thought of a nine-year-old farm boy named Bob Feller getting to see Babe Ruth and Lou Gehrig – and nine times at bat for each of them, plus a pre-game batting show and Babe pitching one inning – was making me jump out of my skin,” Feller wrote in his 1990 memoir Now Pitching, Bob Feller. “But there was even more exciting news than that.”4

It was announced in advance of the game that baseballs signed by Ruth and Gehrig would be sold during the exhibition. Members of Drake University’s Phi Mu Gamma sorority sold the baseballs for $5 each, with the proceeds benefiting the Sally Joy Brown milk fund.

Even before the Great Depression took its crippling hold of the United States economy, $5 was a lot of money for a 9-year-old Iowa farm boy to scrounge up. But just like making sure he would get to the game, nothing was going to stand in the way of Bob Feller getting one of those baseballs.

“Our county had a serious problem with gophers in those days, so the county government had a program which gave you a bounty of ten cents a pair for the front claws of any gopher you killed,” Feller wrote. “The little varmints were more than just pests – they were damaging the crops, and the farmers wanted to get rid of them.”5

Feller and his friend Paul Atkins ran a hose from the exhaust pipe of the Feller family’s 1922 Dodge to the gopher mound near their fields, and they used the exhaust fumes to smoke out the gophers from underground. Feller needed just two hours with Atkins to kill the 50 gophers he needed to earn his $5 from Dallas County.6 (Fortunately for him, he was six years into his big-league career before he allowed that many “gophers” from the mound.)

Later in the week, Feller took that money to Des Moines for a dual-signed baseball.7 To celebrate the $150 that was raised for the milk fund from the sale of the baseballs, the Des Moines Tribune-Capital published a list of those who purchased a ball – which included the almost correctly printed “Robert Filler.”8

On the field, Ruth and Gehrig were joined by some of the best semipro players from the region and top amateur stars. Al Van Camp, whose professional career began with the Des Moines Demons and included a handful of games with the Cleveland Indians late in the 1928 season, and Sam Langford, who spent parts of the 1924, ’25, and ’27 seasons with Des Moines, were the best-known players in the game outside of the headliners.9

Conditions were “too chilly” for baseball and the diamond was “soft,” and because most of the players also hadn’t played since the natural end of baseball season about a month earlier, they “appeared worse than they really were.” The game saw 18 batters strike out, but also pitching “so wild” in the early going that “the home run twins were not given an opportunity to show their hitting skill.”10 The Larrupin’ Lous scored 15 runs over the first five innings on the way to a 15-4 trouncing, a solid piece of revenge after the Bustin’ Babes were 15-7 victors during a stop in Des Moines during the 1927 barnstorming tour.11

Both Ruth and Gehrig homered during the game to the crowd’s delight, and while Ruth was slated to pitch an inning or two, the sparse crowd of about 500 got a bonus when Gehrig also took to the mound.

Ruth’s home run came in the fifth inning on a shot to deep left field. He came to the plate seven times during the game, also striking a single and a double, and sending two fly balls nearly out of the park that resulted in a sacrifice and an out. He struck out five in his four innings of pitching; the only hit he allowed was a single by Gehrig.

There were only six plate appearances for Gehrig, but he hit an inside-the-park home run off the scoreboard in the fifth inning, doubled, singled, and walked twice. Both he and Ruth often batted out of turn, considering they were the two players the crowd really wanted to see play. From the mound, Gehrig threw 3⅓ innings and struck out three while allowing two hits.12

After the exhibition, Feller – still fresh with excitement from seeing the legends and getting an autographed baseball – climbed into a 1927 Rickenbacker Brougham sedan with his dad, Bill, and they drove back west to the family farm. The day connected another link in the “natural marriage”13 between baseball and a boy, which began developing in earnest that spring when he received his first real baseball uniform and a Rogers Hornsby model baseball glove.14

“I still have that ball,” Feller wrote. “I would have been crazy even to dream that I would meet up with both Ruth and Gehrig later, but that’s what happened.”15

Ruth was retired before Feller’s big-league career began in Cleveland in 1936, but Gehrig was the Yankees’ starting first baseman throughout Feller’s first three seasons. The two matched up 39 times, with Gehrig collecting just six hits (three homers) and eight walks for a .200 average. Feller struck out Gehrig 12 times, by far the most among pitchers who faced Gehrig fewer than 40 times (next on the list are Garland Buckeye and Dutch Ruether, who each struck out Gehrig just six times in 36 and 29 plate appearances respectively).16

Feller and Ruth’s lives didn’t cross paths again in a significant way until June 13, 1948. Feller was the starting pitcher for the Indians at Yankee Stadium on the day New York honored Ruth by retiring his number on the 25th anniversary of the ballpark’s opening. A feeble Ruth, who was stricken by cancer at age 53, came through the Indians dugout on the way to the field and was given a random bat upon which to lean by Eddie Robinson, Cleveland’s first baseman.

The bat happened to be Feller’s – and a Babe Ruth model. While Robinson ultimately kept the lumber as a souvenir, the bat lives on in the iconic photo from behind Ruth as he stood alone on the third-base line before the large crowd.17

This article was fact-checked by Joe Wancho and copy-edited by Len Levin.

In addition to the sources cited in the Notes, the author consulted the Baseball-Reference.com, Stathead.com, and Retrosheet.org websites for pertinent materials.

11 In the 1927 exhibition neither Ruth nor Gehrig homered in front of a crowd of nearly 3,000. Because that game was played on October 17, there was much better weather.

12 To wrap up the 1928 barnstorming tour, Ruth and Gehrig traveled north and west to set up for the next day’s game at Stock Yards Park in Sioux City, Iowa. The final game of the tour, which began in Brooklyn on October 12, was supposed to be played in Denver on October 31 but was canceled due to snow. Major-league rules of the time did not allow players to barnstorm later than October 31, so the game could not be rescheduled.

16 Only 11 pitchers struck out Gehrig more times than Feller did, and four others also struck out Gehrig 12 times. Among that group, Feller is one of just four pitchers who held Gehrig below a .300 average (also Jake Miller and Hal Wiltse, .231, and Joe Shaute, .244).