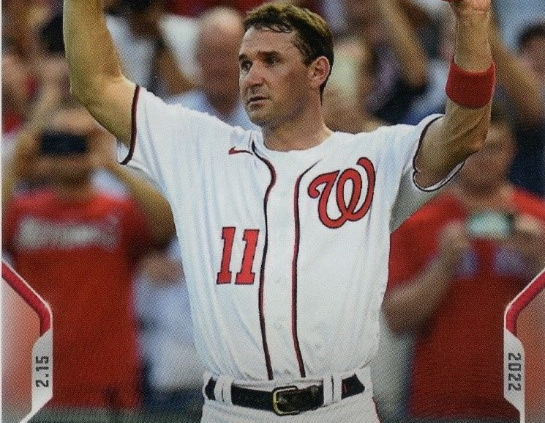 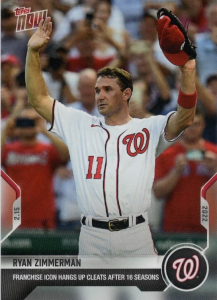 When the regular season ends on a Sunday afternoon in late September or early October, baseball fans are of two minds. Some try to relax their nerves readying for the postseason baseball of their favorite team. Others just go home, anticipating the “hot stove league”1 that helps alleviate the anxiety or boredom of the long winter months ahead. Spring training can’t come too soon.

Washington Nationals fans well understood the former from their experience in 2019. There was barely enough time to catch your breath for a dramatic wild-card game, but plenty of time at the end of October and into the winter to celebrate a World Series title in the nation’s capital for the first time in 95 years.2

They were about to experience the latter as the 2021 season reached its final Sunday at Nationals Park. As the summer had approached the July 30 trading deadline, the names on the back of Nationals’ uniforms were well known by the fans—Scherzer, Turner, Schwarber, Hand, Harrison, Hudson, etc. Trades at the deadline changed all that and now the uniforms—Gray, Ruiz, Adams, Thomas, etc.—lacked that certain sense of familiarity.3

There was one exception: number 11, Ryan Zimmerman, affectionally known as “Mr. Walk-Off” for the 11 game-ending home runs in his career.4 Among his other nicknames: The Z Man, Zim, and Mr. National.

After all, Zimmerman was the very first player selected by the Nationals, the fourth player overall in the June 2005 amateur player draft. He spent that summer moving from Class A to Double-A minor-league baseball, batting .336 and earning a September call-up for his major-league debut. Zimmerman played in 20 games for the Nationals and batted .397, leaving a first and certainly lasting impression on teammates and fans alike. When the team moved to Nationals Park in 2008, Zimmerman inaugurated their new home with a walk-off home run.5

General manager Mike Rizzo told reporters before the October 3 game that 2021 was the Nationals most “difficult and frustrating” season.6 While fans were reflecting that this might be Ryan Zimmerman’s last game as a major-league baseball player, Rizzo was clear about the matter: “Ryan Zimmerman has a place on this roster as a player as long as Mike Rizzo is the GM.”7 Zimmerman, who had celebrated his 37th birthday five days earlier, himself had stated that he was undecided about returning for a 17th season in 2022.

While little was at stake for the Nationals in Game 162, the Red Sox could clinch an American League wild-card berth with a win. The Nationals started 23-year-old Joan Adon in his major-league debut, while the Red Sox countered with veteran Chris Sale (5-1, 2.90 ERA). Sale’s season hadn’t started until mid-August after Tommy John surgery in 2020.

With the game scoreless in the second, Nationals left fielder Josh Bell opened the inning with an opposite field fly-ball double down the right-field line, bringing Zimmerman to the plate with a rousing ovation from the crowd.

As a testament to baseball etiquette and a sign of respect for Zimmerman, Sale wandered off the mound, Red Sox catcher Christian Vázquez moved to the infield grass, and umpire Fieldin Culbreth dusted off home plate as Zimmerman stood alone to receive his due from the fans.8 There was no such dramatic script here, as Zimmerman struck out swinging. Jordy Mercer followed with a double, driving home Bell for the game’s first run.9

The Nationals added a second run in the third inning. Lane Thomas opened with a walk and advanced to second when Alcides Escobar singled to short center. Bell lined a single to left, his second hit, to load the bases for Zimmerman. Surely fans had one thing on their minds for this occasion. Instead, Sale’s four-pitch walk gave the Nationals a 2-0 lead. The Red Sox brought in reliever Hirokazu Sawamura, who induced Mercer to hit into an inning-ending double play.

The Red Sox answered immediately when Rafael Devers opened the fourth inning against Adon with his 37th home run of the season, cutting the Nationals lead to 2-1. But Adon held the Red Sox in check through five innings and the Nationals added to their lead in the fifth.

Escobar opened with a double down the left-field line against Garrett Richards, the next Red Sox reliever. When Richards walked Juan Soto (intentionally) and Bell after a passed ball, Zimmerman came to bat with the bases loaded but struck out swinging again. Mercer’s groundout drove in Escobar. When Alex Avila doubled to right, scoring two more for a 5-1 Nationals lead, little did we know that it was the last Nationals hit of the season.

Adon struck out Devers to open the sixth, his ninth K of the game and the second-highest debut total for a Nationals pitcher after Stephen Strasburg’s scintillating 14-strikeout performance in 2010.10 But successive singles by José Iglesias and Alex Verdugo were signs that Adon was getting tired after 94 pitches, and Patrick Murphy relieved him. Murphy retired Hunter Renfroe on a fly ball to deep right, but a single by Vazquez scored Iglesias with the second Red Sox run of the game.

Erick Fedde took the mound in relief in the seventh inning with a 5-2 lead. After 27 starts for the season, second most on the Nationals to teammate Patrick Corbin (31), he was making his second relief appearance in a week and it didn’t go well. After striking out Kiké Hernández, Fedde yielded successive singles to former National Kyle Schwarber, Xander Bogaerts, and Devers for another Red Sox run. When Verdugo’s two-out double to center plated Bogaerts and Devers, the score was tied at 5-5, and Andres Machado relieved Fedde to get the final out of the inning.

As the Nationals prepared to take the field in the top of the eighth, Zimmerman left the dugout heading to first base, seemingly unaware that none of his teammates were joining him. Bell, first baseman’s glove in hand, followed shortly, replacing Zimmerman on the field with a hug. The crowd roared, their sentiments pervading the park.

Schwarber and his Red Sox teammates led the applause, climbing out of their third-base dugout and onto the field. The Nationals play-by-play voice, Bob Carpenter, called it “the best choreography in the history of this ballclub.”11

After a scoreless eighth inning for both teams, it was time for another farewell, as fans acknowledged the career of Nationals catcher Alex Avila. Two weeks earlier, he had announced his retirement after 13 seasons in the big leagues.12 When Avila exited the dugout in full gear for the top of the ninth, Keibert Ruiz followed to replace him and the crowd accorded Avila a warm send-off, a fitting touch for a sentimental Sunday afternoon.

Ancillary events at the ballpark may be scripted, but baseball games are not. With Kyle Finnegan on the mound, Schwarber reached first on Mercer’s groundball error. With one out, Devers hit his second home run of the game for a 7-5 lead that stood for the Red Sox to clinch the wild-card berth.

Two days later, the Red Sox beat the Yankees in the American League wild-card game at Fenway Park.13 They eventually advanced to the ALCS, losing in six games to the Houston Astros. The Nationals season ended in unfamiliar territory, 65-97, their worst record since consecutive 100-loss seasons in 2008 and 2009. What would it take for the Nationals to climb to the top of the mountain as they did in 2019? Pitching and patience, and plenty of both.

As it happened, they would have to do so without Zimmerman. On February 16, 2022, the front page of the Washington Post covered the story and the sports section bannered Zimmerman’s announcement—“Face of the franchise calls it a career.”14

Baseball is a game of statistics, every season a line on the back of a baseball card. His records for home runs (284), hits (1,846), runs batted in (1,061), and games played (1,799) were all achieved in a Nationals uniform, the only one he ever wore. As Ryan Zimmerman left the field in his last game, fans had left no doubt that he was more than those numbers.

Author Frederic J. Frommer and Washington Post columnist Adam Kilgore captured what Zimmerman meant for the game, the fans and the community broadly. Frommer drew analogies with great Washington Senators pitcher Walter Johnson—“both excelled in unassuming ways, without seeking the spotlight.”16 Kilgore finished his essay simply noting that “there will never be another Ryan Zimmerman.”17 It is a sentiment shared by many.

This essay was reviewed by John Fredland, fact-checked by Laura Peebles, and copy-edited by Len Levin.

The author accessed Retrosheet.org (retrosheet.org/boxesetc/2021/B10030WAS2021.htm) and Baseball-Reference.com (baseball-reference.com/boxes/WAS/WAS202110030.shtml) for box scores/play-by-play and other data. The baseball card (2022 Topps Series One #296) commemorating the retirement announcement by Ryan Zimmerman was purchased by the author. The photograph of number 11 below was taken by the author during the ceremony. 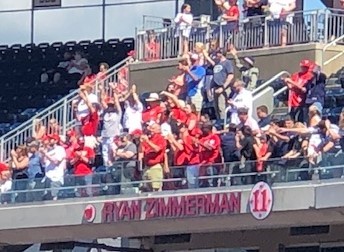 1 Paul Dickson, The Dickson Baseball Dictionary, 3rd Edition (New York: W.W. Norton & Company, 2009), 438. “The gab, gossip, and debate that take place during the winter months when baseball is not being played …”

9 As it happened, this was also Jordy Mercer’s last major-league game. He announced his retirement on April 5, 2022.

11 “Ryan Zimmerman Gets an Ovation.”