This article was written by Ed Gruver 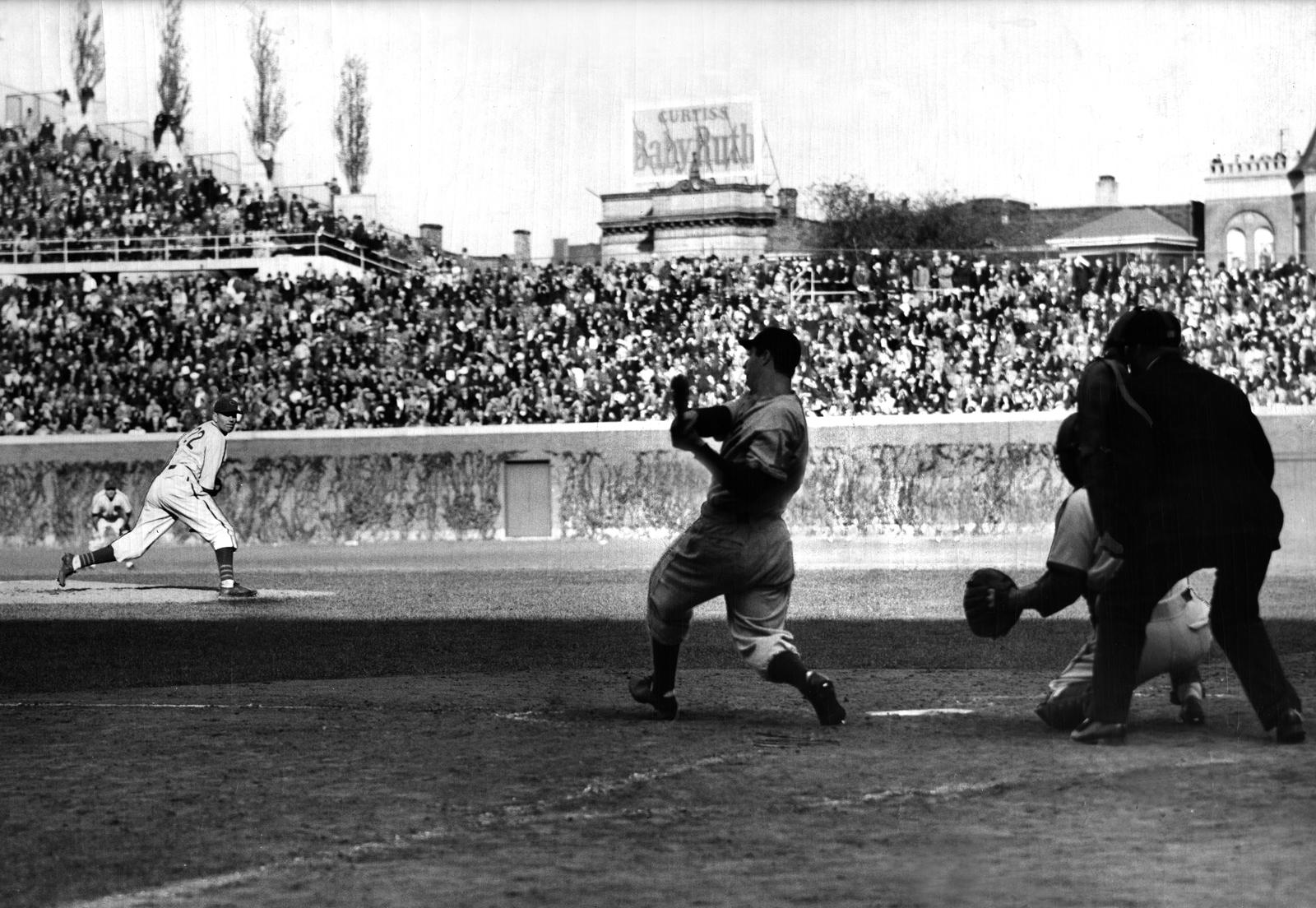 Knowing visitors to Wrigley Field realize upon entering the venerated confines that they are walking into a veritable baseball museum.

Visit Wrigley in the fall, when the ivy has faded from bright green to brown, and you can almost hear those iconic brick walls whisper a tale. A tale of what occurred on October 6, 1938, in Game Two of the World Series between the Chicago Cubs and New York Yankees.

As United Press sportswriter Henry McLemore wrote from Wrigley late that afternoon, one of the game’s immortals “shuffled down baseball’s ‘last mile’ today. … Let it be said that Dizzy Dean walked it gloriously.”1

Dean was far removed from the flamethrower of the Gas House Gang St. Louis Cardinals. When he won 30 games in 1934, Diz was the ringleader of a roguish, rowdy band of ballplayers whose filthy uniforms and five o’clock shadows stood in stark contrast to the rest of the baseball. Dean won 120 games from 1932 to 1936. When he defeated Detroit in Game Seven of the ’34 fall classic, Diz was the “Great Dean,” the self-proclaimed “best pitcher in baseball.”2

A foot injury in the 1937 All-Star Game eventually shortened Dean’s career. But he would have one final memorable campaign in the summer of ’38. Shipped to the Cubs, Dean went 7-1 in the pennant drive. No longer firing his famous “fog ball,” Dean was delivering pitches so slow McLemore said spectators could read NL President Ford Frick’s signature on the ball.

Though Cubs fans regarded him as “Ol’ Diz,” Dean was just 28. His rubber-arm, however, was ready to be retired. Still, when he got the call to start Game Two of the World Series against the Yankees in Wrigley Field, the supremely confident son of the South stirred the Windy City with wild bombast.

“‘I’ll flatten ’em,’ says Diz,” was emblazoned in a banner headline on the Chicago Tribune’s front page the morning of the game.3

New York won Game One in Wrigley Field, 3-1, prompting some to chastise Cubs manager Gabby Hartnett for starting Bill Lee and not Dean in the opener. Ol’ Diz, they thought, was the only Cubs pitcher with the aura to handle the Bronx Bombers’ mystique.

Before a packed house of more than 42,000, Dean climbed the hill at Wrigley Field on this cold Thursday afternoon to face the fearsome Yankees. It was 53 degrees but a stiff northeast wind off Lake Michigan made it feel like 33.

“I don’t like playin’ none in the winter,” Dean said4, but he found solace in seeing a familiar face at first base, former Gas House Gang teammate Ripper Collins. In the crowd he could see another Gas Houser; Pepper Martin was in Wrigley to cheer Dean.

High above the field the press box was filled with the sound of clattering typewriters and telegraph keys as 450 reporters and telegraphers relayed the news to a waiting nation. It was a scenic setting. Red, white, and blue bunting flapped in the breeze, clouds scudded against a blue-gray sky and October shadows slanted across an outfield as green as a billiard table. The infield dirt was bright red, courtesy of cinders being pulverized to a fine powder.

Dean stared in at leadoff hitter Frankie Crosetti and fired a first-pitch strike – a side-arm curve that caught the outside corner of the plate. Four years earlier he would have heaved his high hard one but his throbbing arm dictated that he duel the champs with off-speed stuff. At times Diz mustered his country hardball — the “Ol’ No. 1,”5 he called it — and blew high heat past the Bombers; mostly he pitched gritty, gutsy ball.

Lefty Gomez yielded a run in the first but Dean surrendered the slim lead in the second when Joe Gordon’s two-run double to left scored DiMaggio and Gehrig. “A freak double,” radio announcer John Harrington said, noting that Cubs third baseman Stan Hack and shortstop Billy Jurges collided as they converged on what should have been an easy, inning-ending out.

The Cubs regained the lead with two runs off Gomez in the third. Changing speeds and pitching with guile, Dean deceived the Yankees by throwing his slow pitches with the same motion he used when muscling up on his fastball. Diz’s second-inning offering to DiMaggio had such little spin, Harrington told his audience, that he could see the red stitching on the ball.

In the fourth inning Dean delivered an inside pitch to Gehrig that was so slow the Iron Horse stepped back and grinned. The two legends then engaged in gamesmanship. Diz was working fast to keep his ailing arm warm; Gehrig sought to break his rhythm by stepping out of the box four times in the at-bat. Dean grew angry and made Gehrig wait by stepping off the mound and reaching for the rosin bag. Gehrig ended the gamesmanship by lining the next pitch off Ripper Collins for a single.

Dean was suffering. His arm began stinging in the second inning and by the sixth it felt, he said later, “like a bone was stickin’ out the elbow.” Hurting physically, the Great Dean would not be beaten mentally.

At one point Diz stared hard into the Yankees dugout and shouted defiantly, “Why don’t you great sluggers get out your press clippin’s and read how great you are?”6

Dean’s emotion-packed performance was one for the ages. This was a legendary pitcher in the twilight of his career seeking to survive a squad of ferocious sluggers on the game’s greatest stage.

Seeing Diz stymie the Yankees’ strongmen with side-arm curves, radio announcer Pat Flanagan called it “a spectacular ballgame.”7 Joe Williams of the New York World-Telegram found it astonishing watching Dean take one lordly Yankee hitter after another and make a “first-class sap of him.”8

The Wrigley crowd knew Dean was dealing against a stacked deck. The staggering odds against him made his performance more fascinating. The big crowd hung on every pitch; when Dean left the mound at the end of the sixth, thousands rose and gave him a rousing ovation. John Harrington noted in the seventh that it was still a “beautiful, bright day”9 on Chicago’s North Side. Dean added to the atmosphere by retiring DiMaggio, Gehrig, and Dickey on just nine pitches, bringing Cubs fans to their feet again.

Diz was four outs away from a historic victory when Crosetti stepped in with two outs and a man on base in the eighth. Crosetti had been hitting the ball hard all afternoon. Pitching deliberately, Dean worked the count to 3-and-2. Cubs fans in the stands and those watching from rooftops on Waveland Avenue and waving from apartment windows on Sheffield pleaded for the inning-ending out.

Presaging a dramatic postseason homer by another light-hitting Yankees shortstop, Bucky Dent, 40 Octobers later, Crosetti cracked a chest-high offering for a two-run homer that put New York on top 4-3. At first it appeared a harmless fly to left. But the ball kept carrying until it landed in the bleachers.

“You wouldn’t a-got a loud foul off a-me two years ago,” Dean shouted in his Ozark drawl as Crosetti rounded the bases.10

Crosetti, according to Dean, yelled back, “I know, Diz.”11

One observer believed Crosetti’s homer a “bell of doom” for Dean and the Cubs. The crowd sensed it, and in their silence one might have heard the fall of snow. Suddenly, the onset of a dark, cold winter in Chicago seemed not so far off.

Ol’ Diz headed back to the hill in the ninth but DiMaggio ended his day by pulling a two-run homer to left, closing the scoring at 6-3. McLemore called Dean’s performance “one of the greatest exhibitions of heart and head and competitive spirit” in baseball history.12

In the press box Lloyd Lewis thought “an eloquent silence”13 fell as reporters and telegraphers stared at the spectacle below. The typewriters and telegraph keys were silent as the American press stood out of respect for Dean. Lewis thought it a salute to what each writer feared was the “passing of a great man.”

As he left the mound and walked that glorious last mile, Ol’ Diz – holding his head high and his chin up – stopped and stood for a moment. Raucous cheers and wild applause washed over him.

The Great Dean, thought McLemore, was “drinking in his last deep draught of glory.”14