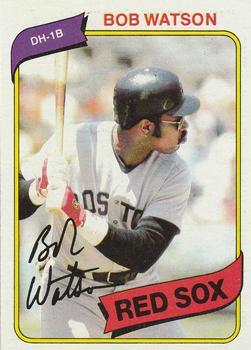 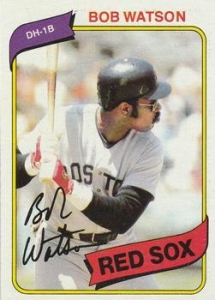 It was the top of the ninth inning with a runner on first and one out. The date was September 15, 1979, and the visiting Boston Red Sox had a comfortable 5-2 lead over the Baltimore Orioles. The batter hit a ground ball to the shortstop, but instead of turning two to end the inning, the shortstop made an error and everyone was safe.

Thus began a cascade of events in which several more Red Sox batters came to the plate, including one who hit a home run, completed a natural cycle, and turned the game into a rout.

The final series of the season pitting the Red Sox against the Orioles took place September 14-16. Coming into the second game of the series, Boston boasted three of the leading five hitters in the American League (by batting average). First baseman Bob Watson topped the list (.341), with Fred Lynn second (.337) and Jim Rice fifth (.329). Not bad for a third-place team.1 Watson had been acquired from the Houston Astros on June 13 in exchange for pitching prospect Pete Ladd, cash, and a player to be named later.2 The 33-year-old Watson had spent his entire career to this point with the Astros (14 seasons), batting .297 with an .808 OPS.3

In the Baltimore lineup, only one starting player, Pat Kelly, was batting over .300 (and just barely, at .301). Yet what mattered was that the Orioles held a 14½-game lead over the Red Sox and were eyeing their first postseason appearance since 1974.

It was Baltimore’s pitching staff, which finished 1979 with an AL-best 3.26 ERA, that put it at the head of the division’s class. The staff workhorse, Dennis Martinez, took his turn in the rotation in the second game of the Boston series. El Presidente4 had won 10 decisions in a row from April to June, but he had claimed only two victories since August 1. He led the league in complete games with 18, but he wasn’t getting run support from his teammates, and so he had taken the loss in four of his last five complete-game outings.

Opposing Martinez was Steve Renko. This was Renko’s first appearance since August 26, and the Red Sox right-hander had won only once since the All-Star break.5 The Saturday evening game drew 49,525 fans, the fourth-largest crowd in Memorial Stadium history.6

In the top of the second inning, Carl Yastrzemski, who had celebrated his 40th birthday a month earlier, led off with a double into the right-center gap. Watson singled to right, but the ball was misplayed by Ken Singleton, allowing Yaztrzemski to score and Watson to take second. Watson jogged to third on a wild pitch. Dennis Martinez struck out Butch Hobson but walked Dwight Evans. With runners on the corners and one out, Mike O’Berry lifted a fly ball to right, deep enough for Watson to tag and score. Boston had grabbed a 2-0 lead.

Martinez settled down, allowing just a double to Watson in the fourth but holding the Red Sox scoreless. Renko ran into trouble in the bottom of the fourth, struggling with his control. He walked Al Bumbry to start the inning. With Mark Belanger in the batter’s box, Bumbry stole second base but was later picked off at second (catcher O’Berry to shortstop Rick Burleson, who tagged Bumbry out). After Belanger struck out, Renko walked both Singleton and Eddie Murray. Kelly’s double drove in Singleton; Murray stopped at third. Baltimore had cut the Boston lead to 2-1.

Baltimore’s spectacular outfield defense kept the game close in the sixth inning. After Yastrzemski walked and Watson forced him at second base, Hobson drove Martinez’s pitch toward the 385-foot sign in right-center. According to the Baltimore Sun, Orioles center fielder Bumbry “somehow got back in time, scaled the 7-foot fence like some kind of acrobat, hung in the air while extending his glove backward and then bounced off the fence like a boomerang with the ball clutched in his glove,” to rob Hobson of a home run.7 Evans struck out looking and Watson was again left on base.

The score remained 2-1 until the seventh inning. With one out, Dennis Martinez yielded consecutive singles to Burleson, Ted Sizemore, and Lynn. Lynn’s opposite-field single to left drove in Burleson. Sizemore and Lynn advanced a base on Martinez’s second wild pitch of the game, and they both scored on Rice’s single—the fourth Red Sox hit in a row—giving Boston a 5-1 lead. Baltimore skipper Earl Weaver walked to the mound to make a pitching change, calling for left-hander Tippy Martinez out of the bullpen, who closed out the inning without any further damage.

Watson led off the Boston eighth with a triple into the right-field corner, his third hit of the game, but he got no farther, as Tippy Martinez retired Hobson, Evans, and O’Berry on groundouts to the left side of the infield. In the home half, Weaver sought to mix things up, in an effort to gain some offense (the Orioles had a total of four hits through the first seven frames) against Dick Drago, who had relieved Renko in the sixth inning and had retired all five batters he faced.

John Lowenstein pinch-hit for Rich Dauer and doubled to right. Wayne Krenchicki entered the game as a pinch-runner and Terry Crowley batted for Dave Skaggs. Crowley struck out, but Bumbry’s double brought Krenchicki home. Billy Smith became the third Oriole to pinch-hit in the inning (replacing Belanger), but he grounded out to second. Drago struck out Singleton, and the score stood at 5-2.

In what proved to be a pivotal move, Smith stayed in the game as shortstop (Krenchicki became the second baseman), keeping Belanger and his eight career Gold Glove Awards in the dugout. After Burleson lined out to begin the top of the ninth, Sizemore reached on an infield single to third baseman Doug DeCinces.

Lynn grounded to Smith, who “booted a perfect double play ball”8 that would have ended the inning with no Boston runs. Instead, with a second chance, the Red Sox pounced. Rice doubled to left, driving home Sizemore and Lynn. Yastrzemski then singled to right, scoring Rice. Jim Dwyer entered as a pinch-runner.

This series of events gave Watson another plate appearance, with Dwyer on first and one out. Needing a home run to complete the cycle, Watson “deposited his [16th] homer into the seats.”9 With the five runs in the inning, Boston’s batters had turned the game into a rout. Watson’s home run was his fourth hit of the game and completed the cycle.10 Further, it was a natural cycle, meaning that the hits came in order from fewest to most total bases (single, double, triple, home run).11

In the bottom of the ninth, Murray led off with a single but then Drago retired Kelly, DeCinces, and Lee May in order to end the game. Boston won, 10-2.

Should Watson’s cycle have occurred? If Smith had fielded the ball cleanly and Baltimore turned the double play, Watson would probably not have batted again in the game, finishing with a 3-for-4 performance in a game that Boston would have won anyway. Smith played predominantly as a second baseman and had played only five games as a shortstop in 1979. In 12 chances at short during the season, however, he committed two errors.12 For whatever reason, Smith’s miscue created a situation that gave Watson an opportunity to bat again, and he seized the opportunity and hit a home run.

Baltimore’s defeat “temporarily stalled the Orioles’ magic number for clinching their first division crown in five years,”13 keeping it at 5, as the second-place Milwaukee Brewers beat the California Angels. Dennis Martinez took the loss, dropping his record to 15-14. Since early August, he had now lost six of seven decisions. This was the sixth time Orioles pitching had allowed double-digit runs all season (although only eight runs were earned).

Watson combined his four hits with Burleson (3-for-5), Sizemore (2-for-5), Lynn (2-for-5), Rice (2-for-5), and Yastrzemski (2-for-4 with a walk) to lead the 15-hit attack against the Orioles. Rice upped his RBI total to 118 and Lynn increased his to 114 for the season. After the game, Watson told reporters, “I feel fortunate because my [left] thumb is still bothering me badly from that collision in Boston. But I want to play. I want to keep going.”14 Since coming to the Red Sox in June, Watson was hitting .349.

This was the second time in his career that Watson hit for the cycle. As a member of the Houston Astros, he accomplished the rare feat on June 24, 1977, in an extra-inning game against the San Francisco Giants, thus becoming the first major-league player to hit for the cycle in both the National and American Leagues. Watson also ended a 14-year “cycle drought” for the Red Sox; before this game, the previous Boston cycle took place on May 14, 1965, off the bat of Hall of Famer Carl Yastrzemski.

The article was fact-checked by Laura Peebles and copy-edited by Len Levin.

The Boston papers contemplated Watson’s future with the Red Sox after his historic performance against the Orioles. The Boston Globe informed readers that Watson was a free agent and that the team’s management had yet to meet with his agent. However, Watson said, “I hope to sign in Boston and like to think I’m going to.”16

As a fun fact, Watson is also acknowledged as the player who scored the one millionth run in baseball history, on May 4, 1975, in a game against the San Francisco Giants.17

The author thanks Bill Nowlin and John Fredland for their insights and assistance with this article.

1 Boston finished the season winning of nine of its final 14 games, but the Red Sox were still 11½ games back of the pennant-winning Orioles.

2 That player turned out to be left-handed pitcher Bobby Sprowl, who went to Houston on June 19. Sprowl was a second-round draft choice of the Red Sox in 1977. Ladd was called up to the big leagues in August from Columbus (Georgia) in the Double-A Southern League.

4 According to his SABR biography, Martinez was given this nickname by teammate Ken Singleton during this 1979 season. See Rory Costello, “Dennis Martinez,” SABR Baseball Biography Project, found online at sabr.org/bioproj/person/dennis-martinez/. Accessed November 2021.

5 Rookie John Tudor was the only left-handed starter for the 1979 Red Sox. He pitched the next night, up against Baltimore’s Jim Palmer. Tudor made six starts in 1979, “which happens to represent all the starts by Boston lefthanders this season.” See “Bosox Bomb Orioles by 10 to 2,” Baltimore Sun, September 16, 1979: 41. That means that 154 of Boston’s 160 games were started by righties.

11 Only 16 major-league batters have hit for a natural cycle. Watson’s feat marked the 12th time.

12 Smith’s fifth error at second in the 1979 season had come a week earlier, on September 8, also against the Red Sox.

15 This was White’s first career cycle. He accomplished his second on August 3, 1982, against the Detroit Tigers.