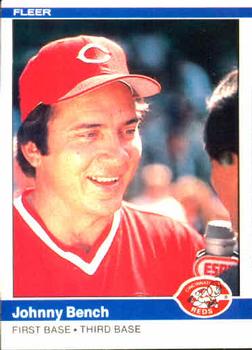 A packed Riverfront Stadium celebrated future Hall of Fame catcher and lifetime Cincinnati Red Johnny Bench’s career achievements. The 17-year veteran had announced his retirement earlier in the season,1 and now the Reds’ faithful enjoyed the opportunity to acknowledge his many contributions to baseball and the Queen City. The two-time MVP and 1970s Big Red Machine driving force had endured several injuries the past few seasons and shifted from catching to playing first base and third base.

Before the Saturday evening ballgame started, Reds announcer Marty Brennaman hosted a 50-minute ceremony with several guests honoring the retiring superstar. The first speaker was former Reds manager Sparky Anderson, who guided the Reds to four National League pennants and two World Series championships while at the helm from 1970 to 1978. Anderson remembered Bench’s famous game-tying home run in the ninth inning of Game Five of the 1972 National League Championship Series, which spearheaded the rally that sent Cincinnati to the World Series. Bench chimed in and recounted how his mother, Katy, approached the fence just before that plate appearance and said, “Hit a home run for me, John.”2

Broadcaster Al Michaels commented on Bench’s character, saying, “The greatest thing is you have done everything with such dignity. A man who has redefined a position. The only one of our generation who has done that.”3

Brennaman read a congratulatory letter from President Ronald Reagan; entertainer and longtime friend Bobby Goldsboro4 presented Bench with a gold record — not for one million sales but for singing Jim Croce’s “Bad Bad Leroy Brown” one million times — and Terry Cashman sang “One Stop Along the Way,” which highlighted Bench playing his entire career with the Reds.5

When Bench finally had an opportunity to address the crowd, the ovation rose and fell several times, reaching six separate peaks.6 He thanked the full house by saying, “I’m here because I love you. I chose to stay in Cincinnati throughout my career because I love the city, I love the fans and I was fortunate enough to be a Cincinnati Red.”7

All 53,790 patrons received a Johnny Bench Night Certificate of Attendance. The evening’s guest of honor selected Ted Bench, his father and teacher, to throw out the ceremonial first pitch.8

The ballgame featured two teams — both with rookie starting pitchers — who were looking ahead to next season. Neither the 76-70 Astros nor the 68-79 Reds were in playoff contention as the season wound down. With two weeks remaining, the National League West Division was a battle between the first-place Los Angeles Dodgers and second-place Atlanta Braves, who were 3½ games behind Los Angeles. Houston was in third place, 8½ games behind the Dodgers, and Cincinnati occupied the basement, though just one game behind the fifth-place San Francisco Giants.

The Astros had spent the season digging themselves out from becoming the first major-league team since the 1962 Mets to lose their first nine games.9 They nearly lost 10 straight but rebounded from a six-run deficit for their first win.10 A 27-12 stretch between June 4 and July 19 launched them from last place to third, where they remained for the rest of the season. The young middle-infield combination of shortstop Dickie Thon and second baseman Bill Doran was complemented by veteran outfielder Jose Cruz and first baseman Ray Knight. Established star pitchers Joe Niekro and Nolan Ryan led the pitching staff.

Jeff Russell, a 22-year-old rookie righthander, started for Cincinnati. Pitching in the seventh game of what turned out to be a 14-year career, mostly pitching in relief, he had a 3-2 record and 2.03 ERA over 44⅓ innings. Russell had won his last start, allowing one run in 7⅓ innings to the San Diego Padres on September 11. This was his first appearance against Houston. Russell’s repertoire included a fastball, hard slider, and changeup.11 His batterymate that evening was Bench, who started at catcher for just the third time in the season.

Mike Madden, a 26-year-old rookie left-hander, started for Houston. Madden began the season in the Astros’ bullpen, then shifted to the starting rotation in late July. He was 7-4 with a 2.88 ERA over nine starts and 75 innings. He had faced Cincinnati twice already; he threw two scoreless relief innings on April 20 and seven innings of one-run ball on July 29, his second career start and fourth win.

Russell retired the top of Houston’s lineup in the first inning on two groundouts and a fly out. Madden pitched around Concepción’s single and a walk to Bench in the bottom half.

Houston threatened to expand its advantage even further when Alan Ashby walked on four pitches, but Russell held firm. Craig Reynolds popped out, Madden sacrificed, and Doran flied out with two runners in scoring position. Russell regained his form from this point, retiring 13 straight Astros.

The Reds again challenged Madden in the second on César Cedeño’s one-out walk and Russell’s two-out single, but Redus struck out to strand both runners. An inning later, Cincinnati broke through. Paul Householder started the third with a single. One out later, Bench strode to home plate. Riverfront Stadium buzzed with anticipation, hoping for one more clutch hit from their honoree.

Bench checked his swing at the first pitch for a ball. On the next offering, he blasted a two-run home run over the left-field wall, tying the game, 2-2. Bench’s drive was his 12th homer of the season and 389th of his career. He raised his index finger rounding first base, indicating to the excited fans, “[Y]ou’re number one in Cincinnati.”12 After he rounded the bases, the cheering crowd demanded — and received — an encore bow.13

Madden, like Russell, settled down over the next two innings, though Bench hit an infield single in the fifth inning.

The Astros caught up to Russell again in the sixth. After Terry Puhl lined out to short, extending Russell’s streak to 13 batters in a row retired, Jerry Mumphrey doubled off the left-field wall. Cruz put Houston back in the lead with a two-run clout, his 13th of the season, down the right-field line. Houston led, 4-2.

Cincinnati attempted to rally in the bottom of the sixth. Oester singled with one out. Pinch-hitter Skeeter Barnes walked on a full count, and Madden’s night was finished. Reliever Vern Ruhle walked Redus on a full count to load the bases. Householder’s sacrifice fly scored Oester and reduced Houston’s lead to one run. But Concepción flied out to center — with Bench on deck — as the Reds missed an opportunity to tie the game.

Bench led off the seventh, with the Astros still leading by a run. But there would be no more heroics; he was retired on a harmless fly ball, and Ruhle posted a scoreless inning. Nixon sent rookie Dann Bilardello out to catch the eighth. Bench’s night was over with little fanfare.

The Astros carried their 4-3 lead into the bottom of the ninth. Ruhle returned to the mound. After Householder struck out looking on a full count and Concepción flied out, Lillis summoned Frank DiPino from the bullpen. Alan Knicely, pinch-hitting for Milner, struck out swinging on a 1-and-2 pitch to end the game.

Madden pitched 5⅓ innings and allowed three runs for his eighth win, Russell allowed all four Houston runs over six innings for his third loss, while DiPino secured the final out for his 17th save.

After the game, Bench was clearly humbled, saying, “It was wonderful, the greatest, superlative thing that could have happened. It was THE greatest thing in my life. Sometimes I wonder if it’s me. Is this possible that I can be in the center of this?”14 Playing his final major-league game behind the plate, Cincinnati’s legendary catcher handled six chances without an error.

Bench’s home run was the last of his storied career; his 389 career home runs led all catchers in major-league history at that time.15 Over 17 major-league seasons, he had 1,376 RBIs, a .267 batting average, and an .817 OPS, along with two MVP Awards, 14 All-Star Game selections, and 10 Gold Glove Awards. In Bench’s first appearance on the National Baseball Hall of Fame ballot in 1989, he was an overwhelming choice for induction, receiving votes on 96.4 percent of the 447 ballots cast.

4 Goldsboro’s version of the song “Honey” topped the Billboard Hot 100 chart in April 1968, the same year that Bench won the National League Rookie of the Year Award and earned the first of his 10 consecutive Gold Gloves.