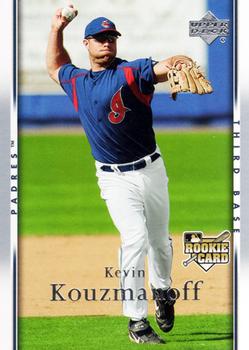 Any time a young minor-league player is called up to the major leagues for the first time, it’s surely a nerve-wracking experience.

So as Cleveland Indians farmhand Kevin Kouzmanoff sat on an airplane that was sitting on the runway in Cincinnati waiting for more fuel, the “what-if” scenarios about what might play out that evening at Ameriquest Field in Arlington, Texas, likely had an added element: What if my connecting flight is delayed so long that I don’t make it to the ballpark?

The plane eventually took off and landed in time for Kouzmanoff to arrive at the ballpark 90 minutes before game time,1 but even with all the extra time to think thousands of miles in the air, never could Kouzmanoff have dreamed up what was actually in store for his major-league debut on September 2, 2006.

Manager Eric Wedge penciled Kouzmanoff into the seventh spot in the lineup as the designated hitter and the 25-year-old Colorado native drove the first pitch he saw 417 feet to center field for a grand slam. That historic homer set the tone for Cleveland’s 6-5 win over Texas — though the Rangers were one close call away from at least forcing extra innings.

“I’m walking up to the plate, I figured, ‘Great, I’m a rookie, bases loaded, here we go,’” Kouzmanoff recalled three years later. “I’m nervous, everyone is here to watch, my family. But then I thought, ‘Hey, I’ve got nothing to lose.’ Just be aggressive and swing the bat if I get a good pitch.”2

“Five or six guys were saying it in the dugout,” starting pitcher Cliff Lee said of what Kouzmanoff was about to do.3

“Fortunately I got a good pitch, up in the zone … hit it out of the park,” Kouzmanoff said. “My family was there, and I’d just worked so hard for so long. My family was very supportive, it was a really cool moment for them to be there.”6

Cleveland center fielder Grady Sizemore homered to right field on the third pitch of the game for his fourth leadoff homer of the season, setting up a rally that saw eight Indians come to the plate in the first inning.

Jason Michaels followed Sizemore with a single, but after Victor Martinez flied out and Ryan Garko struck out, Volquez had a chance to get out of the inning with minimal damage. Despite Michaels stealing second and moving to third on a throwing error by catcher Gerald Laird, Volquez was one strike away from the third out. But Casey Blake drew a walk on a 3-and-2 count and Jhonny Peralta followed with a walk to load the bases and set up Kouzmanoff’s grand slam, which was Cleveland’s franchise-record-tying 12th of the season.

“He got called up at 10 o’clock at night. And we got tickets and went down there the next day,” said Troy Slinkard, Kouzmanoff’s longtime hitting coach, who traveled to the game from Colorado with Kouzmanoff’s family and friends. “He’s the only guy in history to do that, and we were there. That will never be topped. I couldn’t believe it.”7

In the second inning, the Indians added their final run after Sizemore and Michaels singled to put runners on the corners and Martinez followed with a sacrifice fly to left. After Garko walked, Volquez was pulled by Texas manager Buck Showalter, whose bullpen then pitched very effectively. Cleveland had just five hits the rest of the game and only two runners got into scoring position.

Volquez’s season-worst showing lasted 1⅔ innings. His earned-run average ballooned to 6.75 after he surrendered six earned runs and walked three. The 6-5 loss dropped his record to 1-4.

“He was wild in the strike zone when he did throw strikes,” Showalter said. “Command of the fastball’s been a challenge for him.”8

Texas got a pair of runs back in the bottom of the frame. Laird reached on an error with one out and Ian Kinsler followed with a single. Nelson Cruz pounded an RBI double to right and Gary Matthews Jr. brought home another run when he grounded into a fielder’s choice.

The game slowed down offensively until the sixth, when Carlos Lee and Mark DeRosa opened the inning with a single and double, and Kinsler poked a two-out, two-run single to center to cut Cleveland’s lead to 6-4.

After a scoreless eighth, the Indians turned to rookie closer Tom Mastny to finish off the victory, and for the first time in the season, he was shaky in a save situation.

Laird reached on a bunt single to open the ninth and moved to third on Kinsler’s double. After Cruz grounded out to third, Matthews hit a single to right. Laird scored easily, but Kinsler was called out after Blake’s throw from right field led to a controversial bang-bang play at the plate.

“(Umpire Dale Scott) said that he touched the plate after the tag,” said Showalter, who argued the call. “Looking at the replay, it looked a little different.”9

Martinez, Cleveland’s catcher, had a different opinion: “(Kinsler) was out. The umpire called him out. I watched the replay. He did reach the plate, but it was after I tagged him.”10

The game ended four pitches later when Mastny snared a liner off the bat of Michael Young to secure his fifth save of the season — which served as the final one of what turned out to be a three-year career and preserved the suddenly surging Indians’ 18th win in 23 games.

Cleveland’s late-season success didn’t matter in the big picture. Before the rally began, the Indians had fallen to their lowest point of the season at 47-64 and were 28 games out of first place in the American League Central Division. By the time they’d taken the first two games of the three-game series in Texas, the Indians were 65-69 and had gained 10 games in the standings. The Rangers, who had toiled near the .500 mark all season, fell to 69-68 and sat 10 games off the pace in the AL West.

Kouzmanoff was recalled from Triple-A Buffalo after posting some of the best offensive numbers in all of the minors. For the season, he hit a combined .379 (131-for-346) with 28 doubles, 22 homers, and 75 RBIs between 94 games at Buffalo and Double-A Akron. He was expected to be part of Cleveland’s expanded September roster, but was called up early after slugging designated hitter Travis Hafner — a former Rangers prospect — was hit in the hand by a pitch the night before.11

“It’s hard to define, but the quality that gets guys to the big leagues, I saw in Kouz,” said Ted Kubiak, who managed Kouzmanoff in his first professional season in 2003 with the short-season Class A Mahoning Valley Scrappers. “He’s Mr. Baseball. He had a commitment from Day 1.”12

Kouzmanoff hit just .214 in 16 games with Cleveland over the season’s final month, though he did hit three home runs. That included a blast in the fifth inning the next day after Rangers starter Kevin Millwood had retired the first 14 Indians in order. After the season Kouzmanoff was packaged with pitcher Andrew Brown in a deal with the San Diego Padres that brought Josh Barfield to Cleveland. Kouzmanoff hit 87 home runs over a seven-year career.

In addition to the sources cited in the Notes, I used the Baseball-Reference.com, Stathead.com, and Retrosheet.org websites for statistics and team information. I also viewed MLB’s YouTube video of Kouzmanoff’s grand slam:

5 Others to hit a grand slam in their first plate appearance were Florida’s Jeremy Hermida (2005) and Philadelphia’s Bill Duggleby (1898).

11 The bases were loaded when Hafner was hit by the pitch, giving him his 110th RBI of the season as a designated hitter, which broke the Indians record for the position (Andre Thornton recorded 109 of his RBIs in 1982 as a DH).