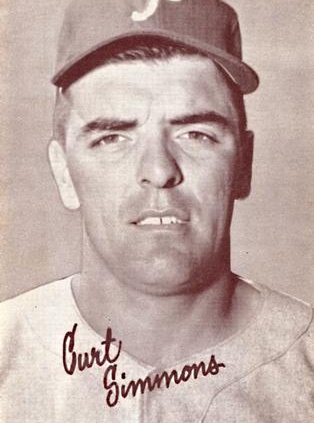 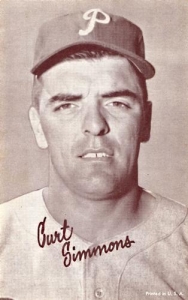 The death of pitcher Bob Miller in September 2020 left only one survivor from the Philadelphia Phillies 1950 Whiz Kids, left-handed hurler Curt Simmons. Simmons was a key member of that 1950 pitching staff, going 17-8 during the pennant-winning season. Late in the season, he was called up to active duty in the Army and was not available to pitch in the World Series. The Phillies were swept by the New York Yankees in Series as the forlorn and ineligible Simmons watched from the stands.

Curtis Thomas Simmons was a hometown boy, of sorts, having grown up in Egypt, Pennsylvania, near Allentown, about 70 miles from Philadelphia’s Shibe Park. Although he was only 21 years old in 1950, Simmons was already a veteran of the Phillies staff, having been a regular part of the rotation since 1948. He made his debut with the Phillies on a memorable September Sunday in 1947 at the age of 18, only a few months out of high school, in a game that kept Phillies fans talking about his potential throughout the long winter.

Simmons’s debut was eagerly anticipated. He had been the most sought-after pitcher in the country after showing off his blazing fastball in high-school and American Legion competition. In 1945 he had been named “All-American Boy” in New York after pitching in a Legion All-Star game there. Ty Cobb and Babe Ruth, who managed those teams, called him “the greatest young ballplayer they had ever seen.”1

That potential was on full display when, while still in high school in June 1947, Simmons pitched for his American Legion team in an exhibition game against the Phillies. He struck out 11 and gave up just seven hits to the major leaguers, as the game ended in a 4-4 tie.2 Phillies general manager Herb Pennock, who watched the game at Egypt Memorial Park in the teenager’s hometown, was most impressed with Simmons’s preparation for the game. Simmons had made his own private book on how to pitch the Phillies hitters like Del Ennis and Andy Seminick. Pennock said, “That kind of observation from a kid who never pitched in better than high school and sandlot ball is what sold us.”3

After signing with the Phillies for a reported $40,000 bonus, Simmons was assigned to their Class B affiliate in Delaware, the Wilmington Blue Rocks. Simmons promptly pitched the Blue Rocks, a seventh-place team when he arrived, into the playoffs with a 13-5 record and then won two playoff games, striking out 23 batters along the way, leading the Blue Rocks to the league championship. “He is the modern Rube Waddell,” enthused Pennock.4 The Blue Rocks clinched the championship on September 21; the next day, Simmons was called up to the Phillies.

A crowd of more than 14,000 showed up on September 28 to see a meaningless doubleheader on the last day of the season between the seventh-place Phillies and the fourth-place New York Giants. The fans were there to see Simmons, who was scheduled to pitch the second game. The Giants won the opener, 4-1. It would not be an easy assignment. The Giants featured a packed lineup of veteran sluggers including Johnny Mize who was tied for the league lead in home runs with Pittsburgh’s Ralph Kiner at 51. Giants manager Mel Ott batted Mize leadoff to give him more at-bats and more chances to break the tie with Kiner. Also in the Giants’ lineup were notable home-run hitters Willard Marshall (36 home runs in 1947) and Bobby Thompson (28).

Thrust onto the big stage at a very tender age, Simmons did not disappoint, dominating the Giants from start to finish, pitching a complete game, and leading the Phillies to a 3-1 victory.

Using a blazing fastball and sharply dipping curveball, the young Simmons started strong and induced several weak groundballs and lazy popups. In the first inning, he broke Mize’s bat on a groundout and recorded his first major-league strikeout by whiffing Giants shortstop Buddy Kerr. Before he took the mound again, the Phillies had staked him to a 2-0 lead on consecutive singles by shortstop Granny Hamner, left fielder Jesse Levan, and right fielder Del Ennis, a walk to center fielder Johnny Wyrostek, and a fly ball by catcher Andy Seminick.

In the second inning, Simmons worked out of a two-on, one-out jam by striking out second baseman Mickey Witek and pitcher Andy Hansen. The Phillies’ lead grew to 3-0 in the third, on a single by Wyrostek, a balk by Hansen, and an RBI single by Seminick. Meanwhile, Simmons cruised through the middle innings and entered the seventh inning having allowed only three harmless singles and three walks.

Giants left fielder Gary Gearhart led off the seventh with a double and third baseman Bobby Rhawn followed with a walk. Again, Simmons proved equal to the task, getting Witek on a popup to first baseman Howie Schultz, striking out pinch-hitter Mickey Livingston, and retiring the dangerous Mize on a roller to first.

After breezing through the eighth inning, Simmons took the mound in the ninth with a four-hit shutout. He retired the first two batters routinely, but then ran into control problems. He walked the just-recalled rookie Rhawn for the fourth time in the game and also walked the light-hitting Witek. Buddy Blattner pinch-hit for relief pitcher Mario Picone and singled to left field, scoring Rhawn and putting the tying runs on base for the dangerous Mize.

Phillies coach Benny Bengough ran out to the mound, whispered some encouragement, and patted Simmons on the shoulder; then the young lefty got Mize to roll a weak groundball to Emil Verban at second to end the contest.5

Simmons’s final line: Nine innings pitched, five hits, one run, six walks, nine strikeouts. For good measure, he contributed his first major-league hit (a single) and a successful sacrifice. When it was all over, thousands of youngsters streamed out of the stands, surrounded Simmons, and, according to sportswriter Stan Baumgartner, practically “pushed him along the grandstand to the clubhouse.” Baumgartner wrote that Simmons used “a fastball that was so alive it occasionally squirted out of catcher Andy Seminick’s glove and a curve that broke like a jug handle”6 to keep the slugging Giants at bay. And what of the Giants’ vaunted trio of sluggers, Mize, Marshall, and Thompson? Combined they went 2-for-12 with a walk against the youngster. The two hits were harmless singles. As Baumgartner put it, Simmons “made the famed home run hitting Giants look like powder puff punchers.”7

For his part, Simmons was modest and composed in speaking about the victory. “I was a bit nervous, always am, just before I start a game,” he said. “But once the game started, I just kept telling myself it was just like Wilmington — just another game. And that is really all it was. Andy Seminick did a great job behind the bat for me. He seemed to know just what to call, and three times when I broke the curveball in front of the plate with men on, he made great pickups. The boys fielded well behind me, too. Just tell all my friends in Egypt and all the Phil fans that I am very happy I got such a fine start.”8

Great talent, great poise, and the ability to talk to the media. Eighteen-year-old Curt Simmons was a rising star indeed.

If Simmons did not quite fulfill all of the promise he demonstrated on that Sunday afternoon, he certainly became a very fine major-league pitcher for a very long time. Over a 20-year career, often interrupted by military service and injury, Simmons compiled 193 wins and eventually did get to pitch in the World Series at the age of 35 with the 1964 Series champion St. Louis Cardinals.

In addition to the notes listed below the author consulted Baseball-Reference.com and Retrosheet.