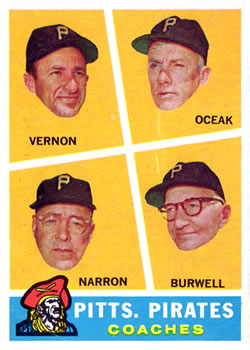 The 33,704 fans who packed Forbes Field for the woebegone Pittsburgh Pirates’ final game of 1947 were there, in part, to see whether slugging outfielder Ralph Kiner could hit his 52nd home run and claim the National League homer crown. They didn’t get to see that. Kiner and the Giants’ Johnny Mize were each blanked on the final day and finished with 51 homers apiece, tying for the league lead.1

The fans did get to see a rare occurrence in major-league history. As of September 2020, only six men have managed a single big-league ballgame and won it. On September 28, 1947, 52-year-old baseball veteran Bill Burwell entered that select club, serving as skipper of the Pirates as they crushed the Cincinnati Reds, 7-0.2

(Before we go further, a clarification: This definition of the one-game, one-win managers’ club is based on games officially credited to each manager in the major-league records. Teams have had unofficial short-term managers for many reasons over the years — such as games where the regular manager is ill, gets ejected, or hands the reins to an esteemed coach or player. However, these games are credited to the regular managers, not their informal replacements. Burwell and the other five skippers are officially credited by MLB as the manager of record for a single game, which they won.3)

The Pirates came into the September 28 game with little incentive except to escape the National League cellar. At the day’s start, they sat in eighth and last place with a record of 61-92 and two ties, 33 games out of first place and a half-game behind the seventh-place Philadelphia Phillies.4 With Kiner and first baseman Hank Greenberg leading the way, the Pirates had decent punch at the plate, finishing second in the NL with 156 home runs, behind the Giants’ 221. But their pitching was subpar: The Bucs’ pitching staff had the league’s worst ERA, gave up the most hits and home runs, and posted the fewest complete games.

The Pirates had played especially poorly in June, going 8-21. And when they slid into the same rut in September, with a 7-18 record going into the final game, it cost manager Billy Herman his job. While Herman officially resigned, some news reports took pains to put quotation marks around “resigned,” suggesting he jumped before he could be pushed.5 Herman’s replacement for the year’s final game was his friend Burwell, in his first year on the coaching staff. A former big-league pitcher of no great distinction,6 Burwell had become a respected minor-league manager, and was rumored as a possible successor for Boston Red Sox manager Joe Cronin if Cronin were drafted for military service during World War II.7

Across the diamond were manager Johnny Neun’s Cincinnati Reds, sitting in fifth place with a 73-80 record, 21 games out of first. The Reds had been Pittsburgh’s guests for the Pirates’ first home game of the year, losing a 12-11 slugfest on April 18, and were back in Pittsburgh for a single game to close out the schedule. That April performance set some of the tone for the year, as the Reds’ staff finished with the third-worst team ERA and third-most hits given up in the National League. The Neunmen, as reporters sometimes called them, came into the game with a 13-8 record against Pittsburgh — their best against any team — though they’d played considerably better at Cincinnati’s Crosley Field (posting an 8-3 record there) than at Forbes Field (5-5).

Greenberg, who played his last big-league game on September 18, was not on Burwell’s lineup card. By and large, the first-time manager started the Bucs’ usual regulars, with two exceptions — veteran Elbie Fletcher at first base instead of Greenberg, and 22-year-old Gene Woodling in place of Wally Westlake. Woodling started in center field, with regulars Jim Russell and Kiner flanking him in right and left. Right-hander Tiny Bonham, who pitched in a swingman role that season, got the start on the mound. He had a 10-8 record and a 4.22 ERA.

Neun rotated a few backups into his lineup, including second baseman Bobby Adams, center fielder Clyde Vollmer, left fielder Eddie Lukon, and catcher Ray Mueller.8 He gave the starting assignment to Buddy Lively, a 22-year-old rookie from Alabama with a 4-6 record and a 4.64 ERA.

The first 2½ innings passed uneventfully. The Pirates got two singles, the Reds recorded a single and a hit batsman, and none of the runners got past first base. The Bucs broke the logjam in the bottom of the third. Rookie catcher Dixie Howell and Bonham led off with back-to-back singles. One out later, Woodling laced a triple to right field to drive them both in, as Reds right fielder Frank Baumholtz tried for a shoestring catch but failed.9 Lively rebounded to retire third baseman Frankie Gustine and Kiner, but Pittsburgh had claimed a 2-0 lead.

Lively and Bonham took over the game for a while, as neither team could manage another baserunner until the bottom of the sixth. With one out, Gustine tripled to center and Kiner singled him in to make the game 3-0. Kiner moved to second on a single by Fletcher and to third on a groundout by shortstop Billy Cox, but second baseman Jimmy Bloodworth stranded him there by lining out to left field.

In the top of the seventh, Reds first baseman Babe Young singled to right field — Cincinnati’s first baserunner since the second inning. He took second on a groundout but the Reds could move him no farther as Lukon grounded out to end the inning. The Pirates, in contrast, cashed in on their scoring chances. Howell led off with a home run over the left-field scoreboard to make it 4-0. Two outs later, Woodling doubled to center field and Gustine homered into the bullpen in left for a 6-0 lead. Reliever Johnny Hetki replaced Lively and retired Kiner on a fly ball to end the inning.10

Bonham, pitching masterfully, again kept Cincinnati off the basepaths in the top of the eighth. The Pirates came back for one more run in the bottom of the inning off the Reds’ third pitcher, Harry Gumbert. Fletcher led off with a double to left field, and three batters later, Bonham singled him in for a 7-0 Pittsburgh advantage.

Bonham closed out the game in the top of the ninth by getting his outfielders some exercise. Baumholtz and Adams flied out to Kiner in left, and third baseman Grady Hatton flied to Russell in right. Wrapping things up in 1 hour and 45 minutes, Bonham pitched one of the finest games of his career, allowing Cincinnati only two hits, a hit batsman, and no walks.11 He struck out two. One beat writer called it the team’s best-pitched game of the year, adding, “The Pirates played as if they needed that game yesterday to clinch the pennant.”12

Bonham continued to pitch for the Pirates in 1948 and 1949, but complained late in the 1949 season of abdominal pain. Tragically, his problem was found to be advanced intestinal cancer, and he died in a Pittsburgh hospital at age 36, two years to the month after this complete-game win.13

Sportswriters in Pittsburgh and elsewhere began buzzing about Herman’s permanent replacement even before he left. A story in the September 24, 1947, edition of The Sporting News identified Burwell as the front-runner for the Pirates’ 1948 managing job.14 The names of Greenberg and Joe McCarthy were also bandied about, while Pie Traynor and Bill McKechnie were listed as not interested.15 The Pirates crossed up most guessers, though, by announcing an agreement on October 2 with Billy Meyer, manager of the minor-league Kansas City Blues.16 The only managing in Burwell’s future turned out to be with Pirates minor-league squads in Davenport, Iowa; New Orleans; and Lincoln, Nebraska.

Still, the high point in Burwell’s career was yet to come. He continued to work for the Pirates organization in various capacities until his official retirement in 1962, capping his career with a five-year stint as the Pirates’ pitching coach. Burwell oversaw Vern Law, Bob Friend, Roy Face and the rest of the Pittsburgh hurlers as the team claimed an upset victory over the Yankees in the 1960 World Series. Even beyond his official retirement, Burwell continued to help the Pirates, working with pitchers at the Class A level in Gastonia, North Carolina, as late as 1969. He died in June 1973, ending a long and respected baseball life — and leaving a one-game managerial record that might be tied, but will never be bettered.17

In addition to the specific sources cited in the Notes, I used the Baseball-Reference.com and Retrosheet.org websites for general player, team and season data and the box scores for this game:

1 Many of the fans may also have attended for the chance to win a free car in a drawing, according to Charles J. Doyle, “Pirates Play Reds in Season Finale,” Pittsburgh Sun-Telegraph, September 28, 1947: 2, 4.

3 As a further example, one-game, one-win manager Vern Benson is known to have unofficially managed several games as a coach with the Cardinals and Braves when his bosses, Johnny Keane and Dave Bristol, were ill or had been ejected. Benson is not officially credited as the manager in these games. Benson’s behind-the-scenes managerial work is detailed further in Rory Costello, “Vern Benson,” SABR Biography Project, accessed September 22, 2020.

4 The Phillies split a doubleheader with the Giants that day, and the two Pennsylvania teams ended up tied for last place with 62-92 records. (The Pirates played two ties, the Phillies one.) It was the Pirates’ worst finish in 30 years.

8 This was the 213th and final game of Lukon’s four-season big-league career.

11 Bonham had also pitched a two-hit shutout for the Yankees against the Boston Red Sox on May 11, 1946. He walked two batters in that game, struck out four, and did not hit anyone.