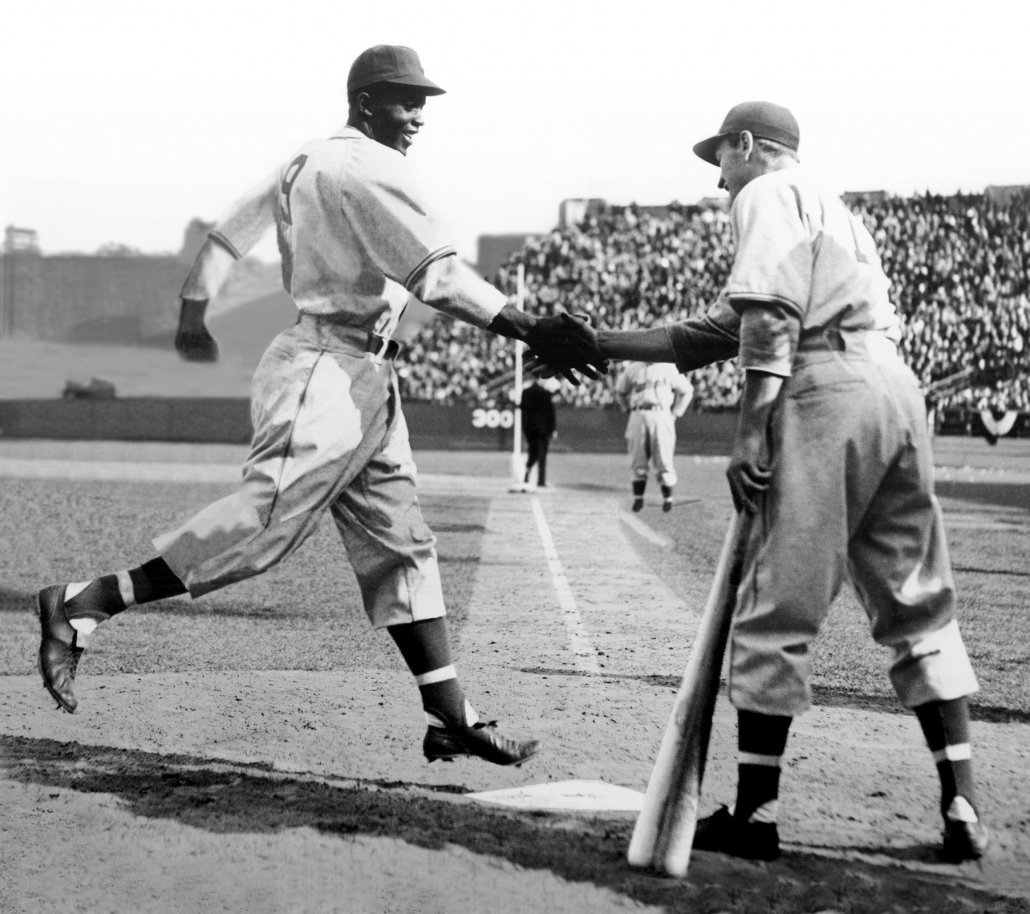 George Shuba, right, greets Jackie Robinson at home plate on April 18, 1946, after Robinson homered in his debut with the Montreal Royals of the International League. (Courtesy of Greg Gulas, Carrie Anderson, Mike Shuba)

A lot has been written about Jackie Robinson’s Hall of Fame major-league career. However, authors tend to gloss over the crucial 1946 season he spent with the Triple-A Montreal Royals. That season was every bit as important — if not more important — than Robinson’s first year as a Brooklyn Dodger. It might also have been the most trying of Robinson’s career.

After he signed a contract with Montreal, The Sporting News deemed baseball integration “impractical, if not impossible.” By the fall of 1946, through sheer talent and determination, with his wife Rachel by his side and with the unwavering support of Montreal fans, Jackie Robinson had made integration seem more inevitable. In those first few months, he deconstructed every argument that had been used to keep the sport segregated for close to six decades. But the road to get there was extremely rough.

Spring training in Florida proved especially challenging. Just traveling to the Sunshine State from his home in California was difficult. Once he arrived, he struggled to learn a new position, he didn’t hit well, he got hurt — and that was happening against the backdrop of possible violence and threats of lynching.

Robinson was able to put the hardships of spring training behind and exploded onto the scene in his first regular season game in “white” baseball. He then spent the rest of the year proving those who thought African Americans did not possess the right makeup to play big-time baseball wrong. Dodgers president Branch Rickey had ordered him never to respond to provocation. Despite the insults raining down from the stands or the opposing dugout, the pitches thrown at his head, the attempted spikings at second base, Robinson kept on going.

The abuse he was taking, combined with the crushing pressure he felt to be perfect on and off the field, took their toll. By mid-August, he was burned out and ordered to rest by doctors. But the team depended on its star second baseman. He had to keep going. Robinson somehow managed to play at a high level for another month and a half until the Royals were crowned champions of the Junior World Series. The “Great Experiment” of integrated baseball was an overwhelming success. Black players could play in “white” baseball. Integrated teams could be winners.

That magical season marked the beginning of a love story between the Robinson family and the city of Montreal that is still going strong more than seven decades later.

“It was probably the only day in history that a black man ran from a white mob with love instead of lynching on the mind.”

Opening Day with the Royals

April 18, 1946: When Jack Roosevelt Robinson went to bat in the top of the first inning on Opening Day — on a field that bore his middle name in Jersey City, New Jersey — he made history as the first Black player in Organized Baseball in the twentieth century.

Robinson certainly did his part to make the day memorable. Nervous, he grounded out in his first at-bat. His three-run home run in his second at-bat set the stage for the memorable photo of George Shuba shaking his hand as he crossed home plate. In this first game, he displayed his speed and his prowess at bunting that was to mark his career. He went 4-for-5 with four RBIs and four runs scored, exceeding all expectations, leading the Montreal Royals to a 14-1 win.

The headline of the Brooklyn Daily Eagle summed up his performance: “Robinson’s Debut a Roaring Success.” 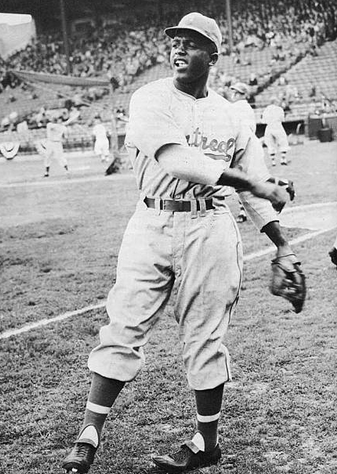 Jackie Robinson of the Montreal Royals warms up before a game at Delorimier Stadium in Montreal in 1946. (SABR-RUCKER ARCHIVE) 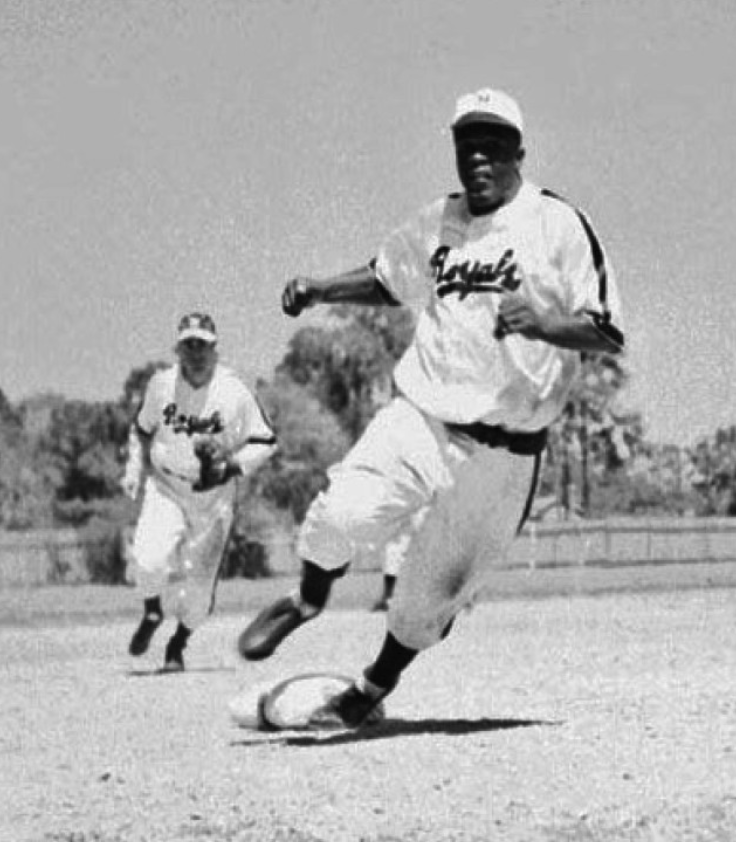 Jackie Robinson rounding third base during spring training with the Montreal Royals in 1946. (Ronny Jacques/Library and Archives Canada)

The reaction in Canada to Jackie Robinson’s signing was generally positive. Paul Parizeau of the newspaper Le Canada wrote that he felt proud that Branch Rickey believed Robinson would be better received in Montreal than in the United States, and that this showed that Montreal was the most democratic city in the world.

Sam Maltin wrote in the Montreal Herald there was no doubt that Robinson’s popularity was the main reason for the increase in ticket sales: “Jackie was regularly surrounded by admirers on this streetcar ride back home, some fans even following him to the door to get an autograph. … In restaurants, Jackie’s meal became cold as he was so busy signing autographs.” Quebec actor Marcel Sabourin, who crossed paths on the streetcar with Robinson, stated: “Instantly he became our idol. His photos filled our scrapbooks, and in the alleys all the youngsters playing ball wanted to be Jackie Robinson.”

John Wright: Pioneer in His Own Right

John Wright will forever be linked in history with Jackie Robinson as the first two players to break the color line in the twentieth century. The New Orleans-born right-hander joined the Montreal Royals in 1946 after first cutting his teeth for nearly a decade in the Negro Leagues, where he had been an ace pitcher for the Indianapolis Crawfords and then the legendary Homestead Grays. After Robinson was signed by the Dodgers, Wright soon followed, and the duo joined 200 teammates — including Negro Leagues veterans Roy Campanella and Don Newcombe — for spring training in Daytona Beach in March 1946.

Wright’s chief strength as a pitcher was control. However, during his brief and infrequent appearances both in spring training and then with the Montreal Royals, his control failed him. Wright was demoted to Three Rivers of the Canadian-American League on May 14. Three Rivers was in seventh place when Wright arrived, but the team ended up winning the league championship. He was joined by Negro League right-hander Roy Partlow during the season.

While Jackie Robinson continued to excel in Montreal, Wright was released by the Dodgers in January 1947 and returned to the Homestead Grays, reluctant to talk about his place in history. Partlow was released in March and returned to the Philadelphia Stars of the Negro National League. Campanella, a future Hall of Fame catcher, and Newcombe both spent the 1946 season in the Class B New England League with Nashua. Campanella was called up to the Dodgers in 1948 and Newcombe in 1949. 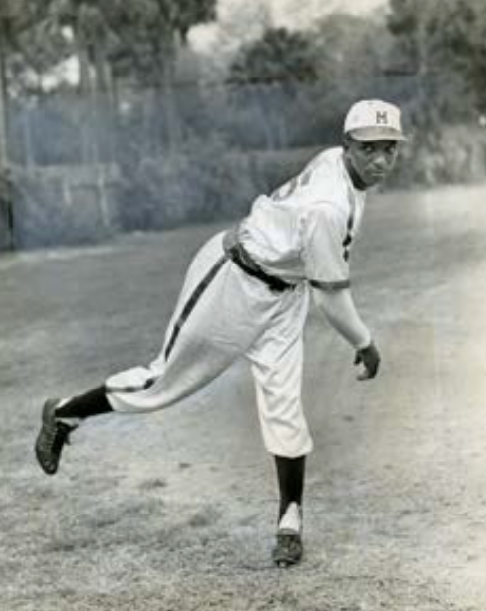 John Wright poses in the spring training uniform of the 1946 Montreal Royals. Wright was the second African-American player signed by Organized Baseball, joining Jackie Robinson as a member of the Brooklyn Dodgers’ Triple-A affiliate that season. (National Baseball Hall of Fame Library) 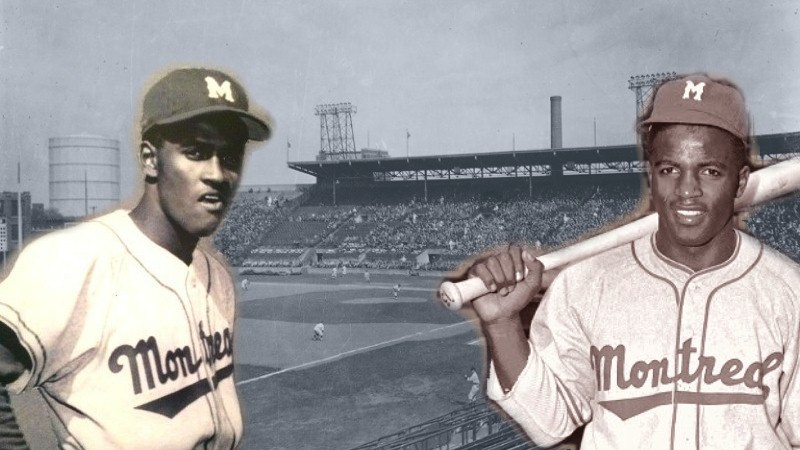 Roberto Clemente and Jackie Robinson both began their minor-league careers with the Montreal Royals (SABRQuebec.org)

Montreal was privileged to witness two prominent baseball players who would go on to play a major role in the fight for civil rights in the United States. Jackie Robinson was the first African-American player to break Organized Baseball’s color line in the twentieth century. Roberto Clemente was the first Latin American player to be inducted in the Baseball Hall of Fame in Cooperstown. These two heroes were instrumental in advancing the status of minority players throughout baseball — and both started their careers in Organized Baseball with the Montreal Royals.

However, the role of Quebec in the integration of baseball goes far beyond that. Three other minor-league teams were integrated in 1946, two of them in Quebec. In Trois-Rivieres, a Dodgers farm club in the Class C Canadian-American League, pitchers John Wright and Roy Partlow had great success after being demoted by Montreal. The first team outside of the Dodgers system to integrate was the independent Sherbrooke Canadians, where shortstop Manny McIntyre — better known as a hockey player — first played on June 3.

When the opening pitch was thrown at the 1946 Junior World Series, it was the first time a Black man had appeared on the field in such a significant game below the Mason-Dixon line. After a season in which the Montreal Royals finished with a spectacular 100-54 win-loss record, 18½ games ahead of their International League competition, they met the Louisville Colonels, who finished at 92-61 and bested their competition in the American Association.

Jackie Robinson ended the six-game series with a .333 batting average. After the series-clinching victory on October 4, Royals manager Clay Hopper — a Mississippi native who did not welcome Robinson to Montreal — made his way over to the second baseman, shook his hand and said, “You’re a real ballplayer and a gentleman. It’s been wonderful having you on the team.”

The faithful Royals fans refused to leave the ballpark for a full 30 minutes. Robinson emerged in street clothes, and the mob of fans gathered around him, cheerfully trying to catch a glimpse or possibly even touch their hero. Tears flowed from Robinson’s eyes when the masses lifted him up onto their shoulders chanting and singing, “Il a gagne ses epaulettes” (“He won his bars”). 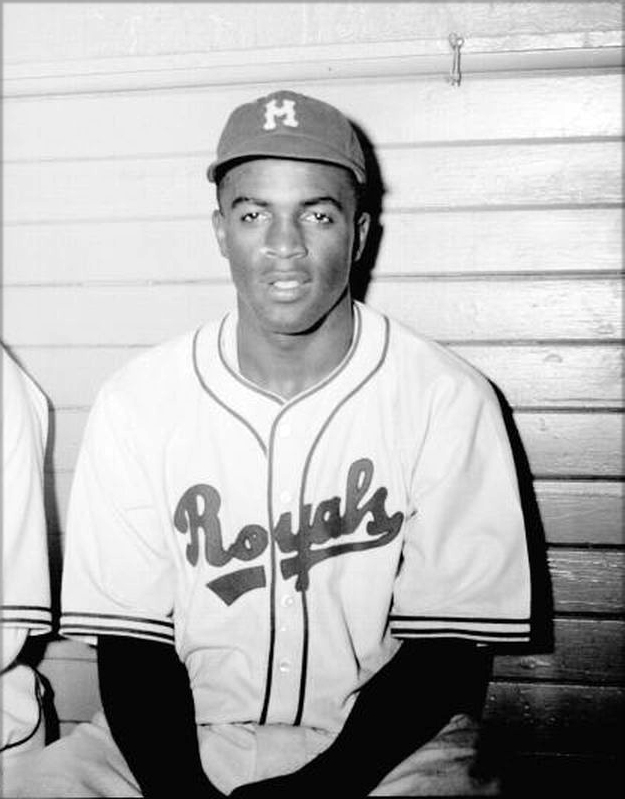 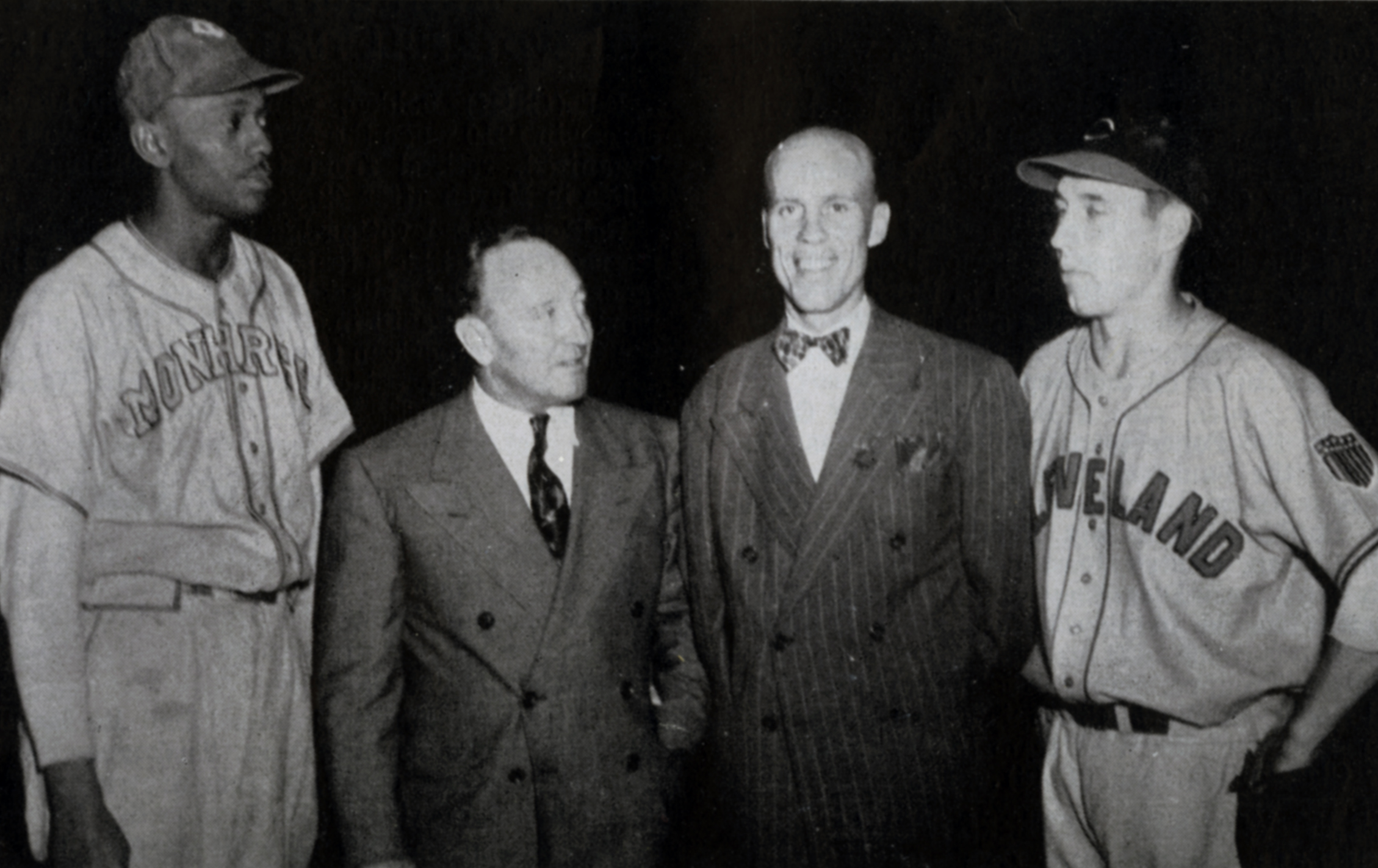 Induction Day at Cooperstown in 1962 saw two new inductees voted in by the Baseball Writers Association of America. Jackie Robinson and Bob Feller had each finished their playing careers in 1956 and their paths first crossed after the 1946 season.

That fall, Robinson was showcased in a barnstorming tour, which started with six games in the Midwest and concluded with several games in California. The tour was coordinated by Mickey McConnell, the Brooklyn Dodgers’ director of promotions. The Dodgers were eager to let America meet the first Black player to enter Organized Baseball in the twentieth century.

That same autumn, Feller also put together a tour that was deemed to be the best organized and financed and most successful tour of its kind. After facing Satchel Paige’s Negro League All-Stars in the early part of his tour and Robinson’s team in four games in California, Feller made a prediction on Black ballplayers: “I have seen none who combine the qualities of a big-league ballplayer – not even Jackie Robinson.”