Join us for SABR Day on Saturday, January 25

You’re not going to want to miss the fifth annual SABR Day on Saturday, January 25!

SABR Day is our annual Hot Stove gathering to celebrate the beginning of a new baseball season. It’s always held on the weekend between the NFL championship games and the Super Bowl. On that day, SABR’s regional chapters organize baseball events around the globe, and you’re all invited to attend.

Some SABR chapters, such as those in Austin, Des Moines, Indianapolis, Montreal and Victoria, are meeting informally at a restaurant or library just to talk baseball or present their new research. Other chapters, such as Houston, Minneapolis and Dallas-Fort Worth, will participate in their local MLB team FanFests scheduled for Saturday.

In Boston, we’ll have a book signing and discussion with the authors of SABR’s newest Digital Library publication, New Century, New Team: The 1901 Boston Americans.

In Denver, we’ll follow up the SABR Day Media Panel with our traditional mass game of catch in the parking lot at nearby Coors Field.

The Chicago and Milwaukee chapters plan to meet in the middle — at the Brat Stop in Kenosha, Wisconsin — for a meeting with guest speakers Christopher Kamka of Comcast Sportsnet, Kane County Cougars announcer Wayne Randazzo, and Jake McGhee, General Manager of the Kenosha Kingfish.

All baseball fans are welcome on SABR Day; you don’t have to be a SABR member to attend, although if you like what you see we hope you’ll sign up.

You can find details of all 30+ SABR Day 2014 meetings at SABR.org/sabrday. Find one near you and join us!

We are pleased to welcome Milwaukee Brewers owner Mark Attanasio as a featured speaker at the third annual SABR Analytics Conference, to be held March 13-15, 2014 at the Hyatt Regency Phoenix in Phoenix, Arizona.

Attanasio has been an accomplished investment management executive for more than 25 years. He is a co-founder and managing partner of Crescent Capital Group, Inc., an employee-owned Los Angeles-based asset management firm. He is also an investor in the Milwaukee Admirals of the American Hockey League. He earned his A.B. From Brown University and his J.D. From the Columbia University School of Law.

For more information or to register for the 2014 SABR Analytics Conference, visit SABR.org/analytics.

2014 SABR Analytics: Telling Stories in the Age of Sabermetrics Panel

We are pleased to announce the Telling Stories in the Age of Sabermetrics Panel at the 2014 SABR Analytics Conference. Time and date TBA.

The wide embrace of metrics as a way to both explain and understand all sports, not just baseball, has changed the way sports writers and editors must approach their jobs. Join us for a discussion of the ways in which metrics have changed coverage of games, and the very nature of what readers have come to expect from, and writers must be able to bring to, the daily sports press.

The SABR Analytics Conference will be held March 13-15, 2014, at the Hyatt Regency Phoenix in downtown Phoenix, Arizona. Register today at SABR.org/analytics.

Please note: All speakers and panelists are subject to change due to availability.

For more information on the 2014 SABR Analytics Conference, visit SABR.org/analytics.

We’re excited to announce the finalists for the 2014 SABR Analytics Conference Research Awards, which will recognize baseball researchers who have completed the best work of original analysis or commentary during the preceding calendar year.

Nominations were solicited by representatives from SABR, Baseball Prospectus, FanGraphs, The Hardball Times, and Beyond the Box Score. Here are the finalists for the 2014 SABR Analytics Conference Research Awards:

Details and criteria for each category can be found here. Only one work per author was considered as a finalist.

Voting for the winners will be conducted online beginning next week at SABR.org, BaseballProspectus.com, FanGraphs.com, HardballTimes.com, and BeyondtheBoxScore.com, with results weighted equally at 20%.

Results will be announced and presented at the third annual SABR Analytics Conference, March 13-15, 2014, at the Hyatt Regency Phoenix in Phoenix, Arizona. Learn more or register for the conference at SABR.org/analytics. 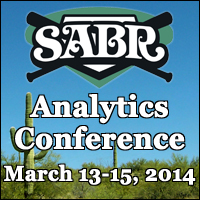 It’s less than two months away from the third annual SABR Analytics Conference, and you won’t want to miss what we have in store for 2014!

Complimentary wireless Internet is available in all rooms booked under the SABR block. The cutoff date to book your room is February 18, 2014. The SABR group rate is only available for the nights of March 10 to March 18, 2014, based on availability. Book your room today!

Once again, we’re bringing together the top minds of the baseball analytic community under one roof to discuss, debate and share insightful ways to analyze and examine the great game of baseball at the:

The schedule will consist of a combination of Guest Speakers, Panels and Research Presentations — plus the unique Diamond Dollars Case Competition, in which undergraduate, graduate and law school students from across the country analyze and present a real baseball operations decision.

Check back soon at SABR.org/analytics as we announce more featured speakers, panels and presentations!

For complete coverage of the 2013 SABR Analytics Conference, visit SABR.org/analytics/2013.

You can still renew your SABR membership for 2014!

For those of you whose memberships expired recently, there’s still a little time left to renew and be a part of the SABR community again in 2014. If you’ve already renewed, we thank you for your support and look forward to another exciting year ahead.

Renew now to receive the Spring 2014 edition of the Baseball Research Journal, plus discounts on registration to the 2014 SABR Analytics Conference and SABR 44 in Houston, and a lot more! We MUST receive your dues by February 28, 2014, in order for you to receive the upcoming BRJ.

We’re excited about the upcoming year ahead of us and we hope you’ll take advantage of all the membership benefits offered to SABR members in 2014 and beyond. 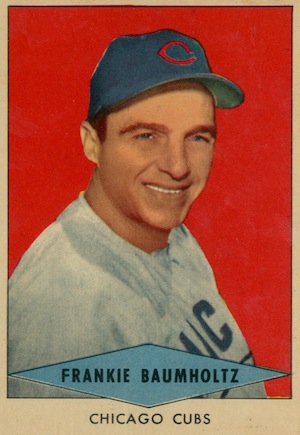 Four new biographies were posted as part of the SABR Baseball Biography Project, which brings us to a total of 2,628 published biographies. Here are the new bios:

You can find the SABR BioProject at SABR.org/BioProject.

1984 Tigers bios posted online: Biographies from Detroit Tigers 1984: What a Start! What a Finish!, edited by Mark Pattison and David Raglin — from Jack Morris to Alan Trammell, from Willie Hernandez to Lou Whitaker, from Aurelio Lopez to Barbaro Garbey — can now be read online by clicking here. To download your free copy of the SABR e-book, click here. (Available in PDF, Kindle/MOBI and EPUB formats.) To get a 50% discount on the paperback edition, click here.

Bios on more than just ballplayers: The ambitious goal of the SABR Baseball Biography Project is to publish a full-life biography of every major league player in history. But SABR members write about a lot more than just ballplayers. In addition, we have pages for Ballparks, Broadcasters, Executives, Games, Managers, Scouts, Spouses, Umpires and a lot more on the BioProject website. You can browse all of these categories at http://sabr.org/bioproj/browse. So if you’ve ever thought, “Hey, that person (or ballpark) should get the full BioProject treatment” — write the story and we’ll publish it!

Get involved! If you’d like to help contribute to the SABR BioProject, visit our BioProject Resources page or read the FAQs section to get started. We’re also looking to expand the BioProject to include all “encyclopedic” articles on baseball-related subjects from past SABR publications or committee newsletters. If you come across an article you think should be included in the SABR “baseball repository” at the BioProject, send a copy or link to markarmour04@gmail.com or jpomrenke@sabr.org.

We’re saddened to pass along the news that one of SABR’s earliest members, Edward Budnick, 82, of St. Clair Shores, Michigan, passed away on January 11, 2014. Ed joined SABR on September 30, 1971, just over a month after the Society’s founding, as member No. 51.

Born September 21, 1931, in Detroit, to Edward and Helen Budnick, Ed’s love of baseball was fostered from an early age. Detroit Tigers players who lived in his neighborhood during the baseball season would often give him baseballs and autographs, beginning a lifelong passion for collecting.

He attended all of the Tigers’ home games during the 1945 World Series, despite the fact that they were played during school days. Going to a World Series game was more important in his eyes than attending school. His dream growing up was to play baseball in the Major Leagues, specifically for the Detroit Tigers. He was once given the opportunity to try out for the Philadelphia Phillies as a shortstop, but didn’t make it.

There were no new SABR research committee newsletters published this week.

Here were the new chapter meeting recaps published this week:

Also, we have two chapter name changes to report: Our newly established international chapter in Italy will be called the Ed Abbaticchio Chapter, after the major leagues’ first Italian-American player who spent nine seasons with the Pirates, Braves and Phillies from 1897-1910. And our chapter in Dallas-Fort Worth, Texas, has renamed itself the Ernie Banks-Bobby Bragan DFW Chapter, in honor of two legendary baseball figures from the Metroplex. The Hall of Fame shortstop Banks was born and raised in Dallas, while Bragan served as president of the Texas League and the National Association before working for many years in the Texas Rangers front office. The Dallas-Fort Worth chapter was formerly called the Hall-Ruggles Chapter.

This Week in SABR is compiled by Jacob Pomrenke, and sent out to all SABR members on Fridays. All previous editions of This Week in SABR can be found here: http://sabr.org/content/this-week-in-sabr-archives. If you would like us to include an upcoming event, article or any other information in “This Week in SABR”, e-mail jpomrenke@sabr.org.

Did you know you can renew your membership at any time? 1- and 3-year SABR memberships are available by clicking “Renew” at http://members.sabr.org. Please also consider a donation to SABR to support baseball research at SABR.org/donate.

Replying to this e-mail goes to an undeliverable address. If you would like to contact the SABR office, please visit: http://sabr.org/about/contact-sabr