From the Co-Directors
Rory Costello and Gregory H. Wolf

Transparent pipeline in Trello: In early September, we introduced a signboard for the BioProject review process using the Trello app. The vetters and editors now use this to see what is available for them to pick up, and Chris Rainey (head of the fact-checking team) also uses it in that stage of the process.

Contributors may also view the board to see where their submissions stand at any given time. By becoming a member of the board, authors may also receive e-mails from the Trello system notifying them when a bio has advanced to the next stage of the review process. Just e-mail Rory at roryscostello@gmail.com if you would like to receive an invitation.

There may be further developments on this front. Stay tuned!

Assignments: Lyle Spatz has stepped down from his BioProject Assignments role. If you’re interested in contributing a biography, please contact Bill Nowlin at bioassign@sabr.org to get started.

‘Cause we’ve got sociability

Okay, so I’m not Lloyd Price, but you get the idea.

On Facebook, where we’re over 3,000 members strong, J.G. Preston posts informative notes on bios every day. On Twitter, Gregory H. Wolf tweets on behalf of the BioProject to more than 11,500 followers. Both platforms are excellent ways to connect with fellow SABR members and researchers and to ask questions about sources and research. What are you waiting for? Come join us!

As of this newsletter, the total number of biographies in the BioProject stands at 5,283. Since the last newsletter, we’ve posted 90 new bios online, including 4 by first-time authors.

Well, here we are—approaching the end of summer and just over halfway through the strangest baseball season we’ve ever experienced. How did you feel about it? Did you adapt to watching MLB games with cutouts of fans in the stands and piped-in crowd noise? If you’re loyal to your local minor league team, as I am, how did it feel not to go to a single game? (Answer: Um, very strange. Also, where did all this free time come from?) Did you use the extra time in your schedule to work on any SABR projects?

At the end of each newsletter, I ask for your comments, ideas, contributions, and suggestions (for the newsletter, that is, not for my life—although that might not be a bad idea). I love getting your emails and enjoy the conversations that follow from them. In the last newsletter, I wrote about how BioProject authors choose their subjects, which brought an interesting response from Jack Zerby. I also heard from Niall Adler about how he put his SABR sleuthing skills to work. I’m grateful to Jack and Niall for getting in touch and for allowing me to share their stories here.

(Stories have been lightly edited. Comments in brackets have been added for clarification.) 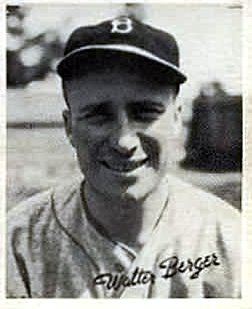 I’ve been working on SABR bios since the inception of the Project in 2002. It took me about a year and a half to write my first bio, a combination of the facts that I really didn’t know what I was doing and that I was still working. (I retired in 2005 and, after a hiatus from bios due to organizing and presenting baseball history and research classes through the adult program of Brevard College, have been doing them steadily since about 2012.)

I selected my first subject, Wally Berger, primarily because I had found a book-length biography by one of his acquaintances in Southern California. At that time digital resources weren’t close to being what they are today, but we did have (through SABR) access to ProQuest Historical Newspapers, which helped a great deal. I tried to contact the book author for permission covering the extensive quotes I used from the book, but never heard from him, so I made a full-disclosure acknowledgment and went on from there. To this day, I’ve never heard from him.

If you look at bios from the early days of the Project, the bibliographical standards were much different then. It’s been several years now since the recommended practice of a narrative statement of sources followed by endnotes has been in effect. I believe it has enhanced the Project, since much more useful information can be distilled into Notes than into bibliographical references. My bios may be “Exhibit A” along those lines.

Like other biographers, I have focused on hometown subjects. I knew Fred Caligiuri as I grew up in a small town in western Pennsylvania. [Zerby and Caligiuri grew up about 30 miles from each other.] As I got deeper into baseball history in retirement, I discovered that despite his short career in the majors, he pitched a complete-game win against the Red Sox on the last day of the 1941 season—the day Ted Williams completed his .406 season, playing in both ends of a doubleheader against the A’s. I had contacted Fred back in 2003 about doing a bio. He was reluctant to proceed then, but in 2012, after my biography hiatus, I contacted him again, and we moved ahead. I had even tried to drop the assignment in the interim, but Lyle Spatz [formerly in charge of BioProject Assignments] suggested I keep going, and I’ll always appreciate his wise counsel.

My next subject, Cliff Melton, was another hometown subject — this time from my new retirement home of Brevard, North Carolina. As I’ve encountered mentions of western North Carolina ballplayers in books and newspaper articles, I’ve considered some for bios. Bill Baker was one of those and proved to be a fascinating subject, both for his brief work as a National League umpire as well as his connection to Willard Hershberger. The Hershberger situation has always fascinated me and made Bill Baker a natural for a bio.

I’ve had great satisfaction working with family members of now-deceased players. By chance meetings I got to know Jennifer Hallett, whose grandfather, Jack, pitched before and after World War II, and Carol McCullough, whose father, Phil, had the briefest of major-league careers but had an interesting post-baseball career, which Carol helped me to document. I’ve had a similar experience with the family of Roger McKee, another western North Carolina player with a fascinating story. His bio, still pending publication in the planned book on “one-hit wonders,” was enriched by input from his widow and son in Shelby, North Carolina, about an hour from Brevard.

Chance encounters with obscure players in books have also led to bios I’ve done. I learned about Pete Varney in a book about the 1968 Harvard-Yale football game and found that he became a legendary small-college baseball coach after his short playing career. In reading about the powerhouse Yankees of the ‘30s, I came across Johnny Broaca, a talented pitcher who was truly his own worst enemy. I encountered the delightful Randy Jackson at a meeting at the Ty Cobb Museum; I was surprised that he was not yet the subject of a bio, and he and his wife enthusiastically agreed to participate. The recent bio of Mike Kreevich arose from the death last August of my good friend and fellow SABR member, John Gabcik. John, a lifetime White Sox fan, had claimed the Kreevich bio but hadn’t been able to proceed far because of illness. I checked with Rory [Costello, BioProject Co-Director and Chief Editor] about taking it on, and the joint-authorship bio that resulted makes, I believe, a fitting SABR memorial to my friend and fellow biographer.

My fascination with Moe Berg led me to write about John Kieran. The fact that Kieran had written an interesting autobiography helped immensely with my SABR bio. And back on the hometown theme, I’m now working on Gil Coan’s bio [now completed]. He came to Brevard College in 1941, met the coed who would become his wife of 78 years, and came back here to a successful business career after 11 years in the majors.

The BioProject and, since 2014, the Games Project, with which I’m also active, have occupied a significant part of my time in retirement. I’m glad to have had them available and to have met so many like-minded people both at SABR conventions and over the internet as the years have rolled on.

I grew up in Albany, California, a small suburb, 1.3 miles square, in the San Francisco Bay Area and one of those places where everyone knows everyone else. My mother grew up here from the time she was born in the 1940s, and our only major leaguer was infielder Ron Hansen. [Hansen was born in Oxford, Nebraska; his family moved to Albany when he was two years old.]

In one of the Facebook Groups for Albany, someone posted that a woman who lives on Santa Fe Avenue found an old letter — “To Frank” from “Little Rat Babe” — in a wall of her house. The post included a few details of someone named Thelma and Edward and not much else. The letter was from a solider during World War II to a friend back in Albany.

The author of the letter asks if Frank has been fishing lately and asks him to “catch me a ten pound bass.” The writer expresses his wish that he could “hang on a fishing pole instead of a rifle.” He also wonders how his mom was making out driving a car for the first time.

So I put my SABR skills to work. I first tried genealogybank.com and Ancestry along with the government database for the 1940 census. I tried to access old census records and to decipher 1940s handwriting and census coding to see if there were any clues. Not much luck until I remembered that old phone books were a nice way of finding people. I looked for the 1100 block of Santa Fe in the 1943 Oakland phone book. Lo and behold, there was one Frank Gira.

Page from the 1943 Oakland phone directory for Santa Fe Avenue. Francis Street, under which Gira is listed, and the other streets shown are cross streets to Santa Fe.

By chance, Gira was a former player for the San Francisco Seals and played with a young Joe DiMaggio. He had a wife, Thelma, and was one of three brothers who played at McClymonds High in Oakland. All three had a tryout with the Oakland Oaks. We later found out that the Edward mentioned in the letter was Gira’s son.

Said one San Francisco Chronicle story, “The feature fielding play was turned in by Frank Gira, a corking little infielder who fell flat on his tonneau while fielding a ball and then threw the runner out at first base.” He also played with a young “Joseph Paul DiMaggio.”

I found few tidbits about the family and more about the mysterious letter that happened to be in the wall of an old house in Albany. Thelma went on to work with the Albany PTA and likely knew my grandmother, Rosemary, who helped build the first true library in town.

How about that for a story?

And, with that, we come to the end of another newsletter. From all of us who work on the BioProject, thank you for reading, for contributing, and for making the BioProject vibrant and interesting. We wish you a happy holiday season. Stay safe, stay well, and stay in touch!