Legacy of the Antitrust Exemption

One hundred years ago, the United States Supreme Court’s decision in Federal Baseball Club v. National League on May 29, 1922, was the last gasp for the short-lived Federal League — which challenged the National League and American League as a self-appointed third “major league” — and a lasting gift to Major League Baseball into the twenty-first century.

This ruling granted Major League Baseball exemption from the antitrust laws of the United States, effectively making MLB a legal monopolist and monopsonist.

A monopsonist is a firm that acts as the only purchaser in a market – the opposite of a monopoly, in which a market has only one producer of the product. MLB is the only professional sports league in North America that continues to hold blanket immunity, although others enjoy limited immunity in regard to television rights.1

Since 1922, MLB’s antitrust exemption has been upheld in Toolson v. New York Yankees, Inc. (1953) and Flood v. Kuhn (1972). In 1998 Congress passed the Curt Flood Act, which eliminated MLB’s antitrust exemption for labor relations with players.2 The act had little noticeable impact, as Marvin Miller and the Major League Baseball Players Association (MLBPA) had already dramatically changed the balance of power in labor relations.

The 1922 Supreme Court decision did not change the behavior of the owners, who already behaved like monopolists. But it did embolden their anti-competitive behavior. The most famous example of this was the reserve clause, which had been in place since 1879.

The half-century following Federal Baseball Club v National League saw the players organize, hire Marvin Miller, and grow into a powerful union. Until 1975, when arbitrator Peter Seitz — who held that role thanks to collective bargaining between the players and owners — ruled that the reserve clause was not infinitely renewable, MLB was granted free reign to impose whatever conditions they wanted in their contracts. The effect, unsurprisingly, was players who were paid far less than what they would have earned on the open market.3 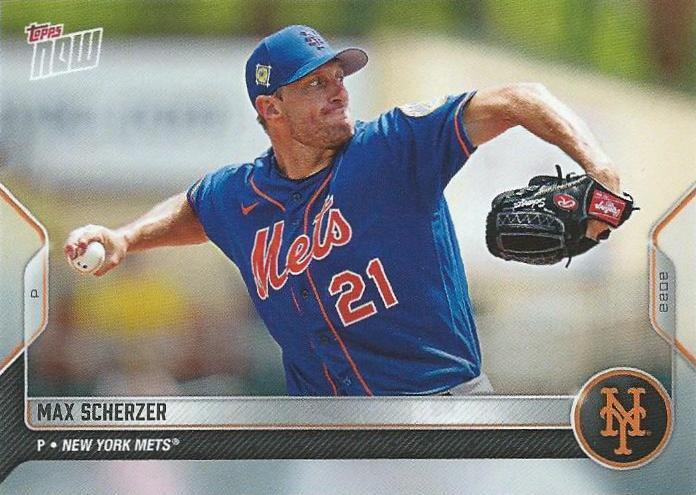 Max Scherzer was one of the top free agents available before the 2022 season. The 37-year-old pitcher signed a record-setting three-year, $130 million contract with the New York Mets. (Photo: Trading Card Database)

Despite the increased bargaining power made possible by the player’s union, players are still not entirely free to pick and choose their terms of employment today.

Collective bargaining has resulted in free agency, but only after six years for most players. In addition, players are still subject to an amateur draft, which limits their choice of initial employer. The inequity of this pay gap between younger and older players was one of the hot-button issues in baseball’s labor dispute during the 2021-22 offseason.

While free agency is the most famous result of MLB’s legal monopoly status, it is not the only one. Because it is exempt from antitrust laws, MLB is able to write contracts and enforce agreements that make it virtually impossible for a competitor league to exist. MLB can threaten to blackball broadcasters who contract with competing baseball leagues, and they can prevent municipally owned stadiums from leasing their MLB-occupied ballparks to competitors, even during off days and the off-season. These tactics would not be possible in a truly competitive market.

The National Football League provides an example of what kind of competition baseball may have faced had the Supreme Court ruled differently in any one of its three baseball cases.

Since 1922, the NFL has had to face off against no fewer than 14 competing leagues.4 In 1986, the United States Football League even successfully sued the NFL for monopolistic practices. MLB’s antitrust exemption has made it virtually impossible for another league to compete. There has been no serious attempt since the demise of the Federal League in 1915. But if the exemption were revoked, we could see more expansion as a way to fend off competition. 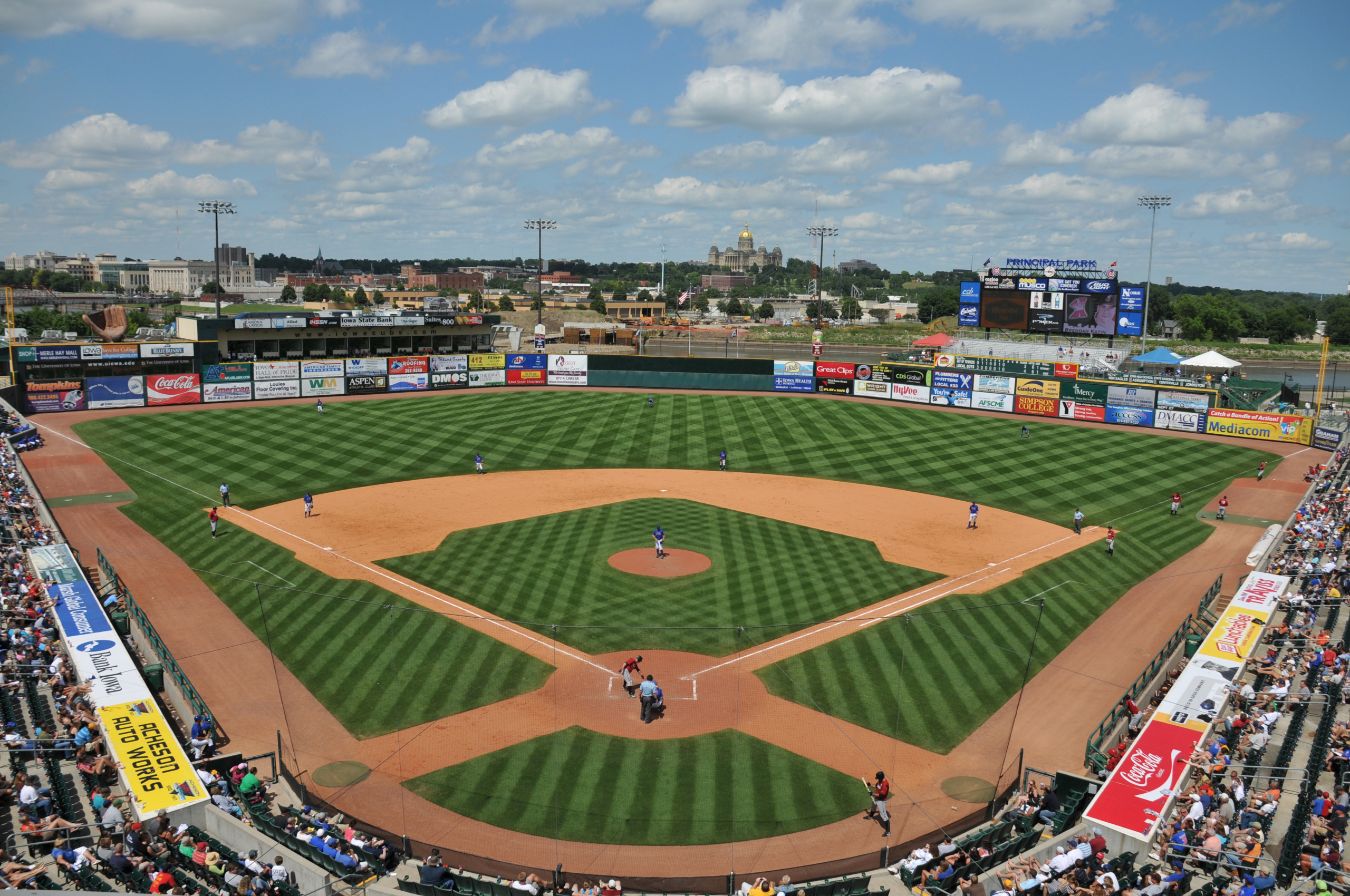 What would happen if Congress or the Supreme Court were to strip MLB of its monopoly privilege?

Some argue that revoking MLB’s antitrust exemption would prohibit it from supporting farm systems and could lead to the collapse of the minor leagues.5 This seems unlikely, however.

At the start of the 2022 season, there were 69 professional baseball teams in seven leagues that are not affiliated with MLB. History also suggests that farm systems, while efficient, are not necessary for the provision of future talent. Prior to the rise of the farm system, which MLB originally fought, there were hundreds of independent minor league teams that served as a training ground for future MLB talent.

In December 2020, MLB axed 42 minor league teams, reducing the number of affiliated clubs by 26% overnight. And while the long-term implications of that move are still unknown, the immediate impact was little noticed beyond the affected communities. This diminution of the minor leagues took place despite (or because of?) MLB’s antitrust exemption.

Without its antitrust exemption, MLB could not enforce geographic exclusivity for teams, nor prevent them from moving without league permission. Contrast that with the NFL, which saw the Raiders move from Oakland to Los Angeles, and then back again, despite the league’s protestations. And that was only the beginning of teams that unilaterally decided there were greener pastures in other cities.

Antitrust exemptions allow sports leagues to package broadcasting rights, implement blackouts, and share broadcast revenues in order to shore up weak (i.e. small market) teams. This makes it more difficult for competing leagues to move into markets or secure television contracts of their own.

If MLB was not a legal monopoly, it could not impose standard pay on minor leaguers across all teams and levels, nor would the league be able to impose a limit on the number of minor league franchises with which an MLB team affiliates, or the number of players it employs.

Antitrust exemption paves the way for MLB to bundle the licensing of all team memorabilia into exclusive contracts and strike league-wide sponsorship deals. Without such protection, potential vendors would have 30 different MLB teams with which to negotiate, instead of the MLB monopoly.

Exemption from antitrust laws reaches far more areas of the baseball business than just player contracts. So while players have largely unfettered themselves from the reserve clause chains, MLB still profits handsomely from its status as a legal monopoly. In no small part, it helps explain why the value of its franchises collectively tops an estimated $60 billion.6

Sports leagues argue that they cannot exist without restricting competition among their members. While there is some truth to that, it is also a convenient reality that being a monopolist is quite profitable.

Farzin, Leah, “On the Antitrust Exemption for Professional Sports in the United States and Europe,” Jeffrey S. Moorad Sports Law Journal, Vol. 22, No. 75, 2015.

Haupert, Michael, “Player Pay and Productivity in the Reserve Clause and Collusion Eras,” Nine: A Journal of Baseball History and Social Policy Perspectives, Fall 2009b: 63-85.

Zimbalist, Andrew, “Salaries and Performance: Beyond the Scully Model,” in Diamonds Are Forever: The Business of Baseball, ed. Paul M. Sommers, ed. (Washington, DC: Brookings, 199a2: 109-33).

Zimbalist, Andrew, Baseball and Billions: A Probing Look Inside The Big Business Of Our National Pastime (New York: Basic Books, 1992b.

1 For an overview of professional sports and antitrust legislation, see Farzin (2015).

2 This applied only to players, and not any other labor groups, such as umpires. 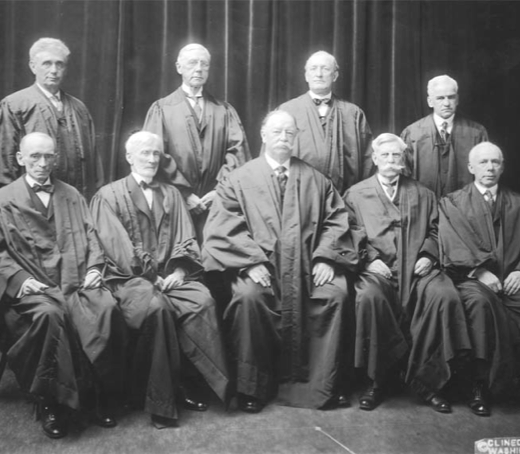 ‘Cranks’ on the Supreme Court

When William R. Day joined the Supreme Court in 1903, he was already known as an avid baseball fan. Even in his early years on the Court, reports of his appearances at games reflected a journalistic awareness of his routine attendance, which in turn reflected an interest on Day’s part that extended beyond opening days, World Series, and other especially spectacular games.

Day demonstrated his love for the game in both his professional and his personal life. While serving on the Supreme Court, he would arrange to have a page provide him with inning-by-inning updates during the World Series.

Chief Justice William Howard Taft was also a baseball fan — while serving in the White House on April 14, 1910, he became the first president of the United States to toss the ceremonial first pitch on opening day at a major-league game. His brother, Charles P. Taft, owned the Chicago Cubs from 1914 to 1916. 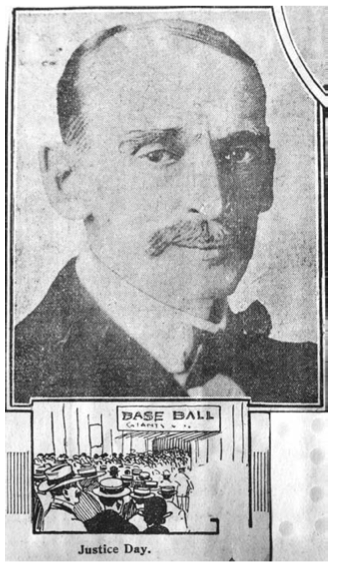 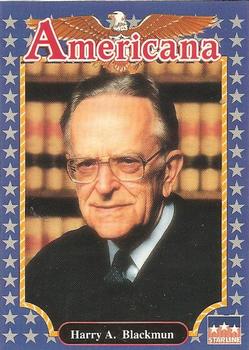 Topps’s interest in chronicling historic firsts in its inserts sets means that cards of both Thurgood Marshall and Sandra Day O’Connor have been available inside packs of baseball cards.

In 2021, as part of the Summer of SABR: Golden Celebration Series virtual event, SABR’s Business of Baseball Committee led a panel discussion on Curt Flood and the Reserve Clause, moderated by author Daniel R. Levitt.

Check out more books from SABR authors related to Baseball and the Supreme Court: 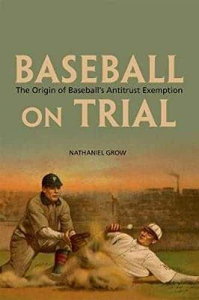 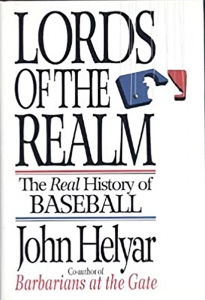 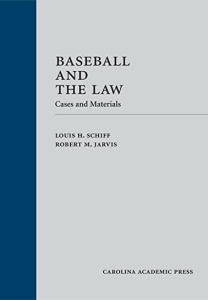 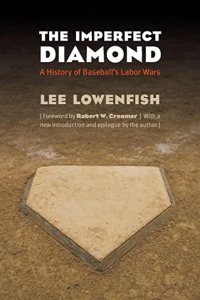 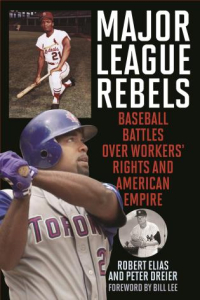