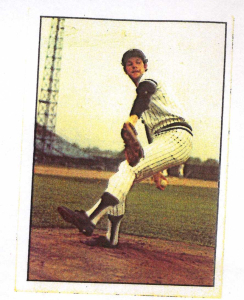 Ken Crosby’s workday on a fine Southern California spring afternoon lasted only three innings. The Chicago Cubs right-hander, making the first major-league start of his career after eight seasons of professional baseball, gave up two singles, a double, and two triples; “three other drives were barely contained within the 410-foot confines” of Jack Murphy Stadium in San Diego.1

The Padres had scored four runs by the time Chicago manager Jim Marshall pulled Crosby for a pinch-hitter in the fourth inning. It was a sound managerial decision, as Joe Wallis tripled and later scored in a two-run inning that took Crosby off the hook. Alas for the Cubs, the Padres went on to score four runs in the bottom of the eighth to win, 9-5.

It was April 29, 1976. Gerald Ford was president of the United States. In two days, Republican challenger Ronald Reagan, a former California governor, would win the Texas primary. Jerry Brown, the sitting California governor, was battling Jimmy Carter and others for the Democratic nomination in the first post-Watergate presidential election. In a Las Vegas courtroom, three yellowed, handwritten pages were filed as the purported last will and testament of billionaire recluse Howard Hughes. In Europe, the Greeks witnessed their final solar eclipse of the twentieth century, while in San Diego 11,590 spectators witnessed an event even rarer — the only base hit of Ken Crosby’s major-league career.

With one out in the top of the second inning, Crosby, batting ninth, knocked an offering from left-hander Brent Strom into right field, where it was gloved by future Hall of Famer Dave Winfield. (“I was very sick that day,” Crosby recalled years later. “He got behind in the count and gave me a fat one. I hit it to right!”) Later in the inning, Crosby advanced to second on an error by first baseman Willie McCovey, another future Hall of Famer. Crosby would be stranded. For unfair comparison purposes, Winfield would end his career with 3,110 hits and McCovey with 2,211, compared with Crosby’s standalone single.

On the mound, Crosby appeared in 16 games over two seasons with the Cubs, all as a reliever except for this lone start. His record was 1-0. He pitched 20⅓ innings, giving up 30 hits (including three homers) and 19 runs (all earned). He walked 15 and struck out 11. He finished seven of the 16 games in which he appeared, though he had no saves. His career earned-run average was 8.41.

In the field, he was flawless, handling a single putout and five assists without error.

At the plate, the 6-foot-2, 179-pound right-handed batter had three appearances with one walk and the single. The out occurred in unremarkable fashion at Dodger Stadium in a game remembered for a save, though not by a pitcher and it did not happen on the mound.

On April 25, four days before he got his hit against the Padres, Crosby and the Cubs were in Los Angeles. Chicago starter Steve Stone left in the second inning with a sore shoulder and Crosby was tapped to replace him. Crosby led off the third inning, grounding a Rick Rhoden pitch to shortstop Bill Russell, who threw to Steve Garvey to get him.

Crosby was on the mound in the bottom of the fourth. His first pitch of the inning, to Ted Sizemore, was outside. Suddenly, there was a commotion behind him in left field. A man ran onto the field with an American flag, which he spread out on the grass like a picnic blanket. He was soon joined by an accomplice, who would turn out to be his 11-year-son. The man poured lighter fluid on the flag. Racing toward them from behind, Cubs outfielder Rick Monday saw one of them strike a match. He had a revelation: “I thought, they can’t light it if they don’t have it.”2 He bent down to snatch the banner without breaking stride. Monday, who spent six years in the Marine Reserve, got a standing ovation from the crowd when he came to the plate to bat in the fifth and was treated as a hero for the rest of the Bicentennial Year season. After the man and his son were escorted off the field, Crosby got Sizemore to pop up to second, an anticlimactic ending to the at-bat.

The rest of the inning was a disaster for Crosby, who gave up a home run to Henry Cruz after a single by Garvey and a walk to Ron Cey. Steve Yeager’s single followed by a stolen base (one of only three he would have that season) and Russell’s single accounted for a fourth run. Scheduled to bat leadoff in the fifth, Crosby was pulled for a pinch-hitter. The Dodgers went on to win 5-4 in 10 innings in a game seen by 25,167 spectators.

Crosby, whose baseball nickname was Bing (of course), was a rare player from his era to have been born in Canada.

Kenneth Stewart Crosby was born on December 15, 1947, at New Denver, British Columbia. He was one of three sons for the former Alice Catherine Speed, the daughter of an English-born streetcar motorman and hotelier, and Frederick Homer Crosby, the son of parents who immigrated from Austria-Hungary. Both parents were born in British Columbia. (When Ken Crosby entered the United States as an infant, his ethnicity was described as Bohemian. His player contract card with The Sporting News lists his heritage as English-Austrian.) The couple met one summer when Alice was working at her family’s resort and general store at Likely, an old Gold Rush town. Fred, a gold miner, was looking for a nearby mining camp. They married in Vancouver in 1940, a wartime marriage as Canada had declared war after Germany invaded Poland the previous year. Five of her brothers served with the Canadian forces.

On Ken’s birth, Fred Crosby was superintendent of the Mountain Chief Mine in New Denver, a village of 1,671 people in the province’s Kootenays region in southeastern British Columbia. The mine produced lead and silver. During World War II, the village was the site of an internment camp for 22,000 Canadians of Japanese ancestry who were forced from their homes. The camp is now known as the Nikkei Memorial Internment Centre, a national historic site.

Fred Crosby’s work as a geological mining engineer for McFarland & Hollinger took him to mines on both sides of the border, forcing long separations from his family. In 1952 the Crosbys moved to Wells, Nevada, where they spent part of the summer living in a large tent with a wooden floor. Three years later, the family moved to Provo, Utah. In 1957, Fred was critically injured in an accident at the Oprih Hill Mine in Tooele County. He was hospitalized for a year and left paralyzed from the waist down.

Ken Crosby pitched for the Provo High Bulldogs, as well as a state champion American Legion team in 1965-66. In 1968 he started Brigham Young University’s first-ever game in the College World Series. Though he had an undistinguished 4.01 earned-run average over the season, coach Glen Tuckett called on the right-hander to face a tough University of Southern California team under coach Rod Dedeaux. Crosby gave up just one hit through seven innings before losing 5-3 after a hit, two walks, a hit batsman, and an error led to four runs in the eighth. The winning pitcher was a left-hander named Bill Lee, a 22nd-round draft pick of the Boston Red Sox who had yet to be nicknamed “Spaceman” for his iconoclastic behavior.

Crosby, who majored in social psychology, was named outstanding BYU senior in 1969.

The pitcher spent the summer of 1968 with the Eureka Humboldt Crabs, who won the California state semipro championship. He was scouted by Ken Voller while with the Mesa (Arizona) Collegians the following summer. The New York Yankees picked him in the 10th round of the 1969 free-agent draft. The team signed him 12 days later, on June 17, 1969.

Crosby pitched in the Yankees system for the Kinston (North Carolina) Eagles, the Johnson City (Tennessee) Yankees, the Manchester (New Hampshire) Yankees, and the Syracuse (New York) Chiefs before being traded to the St. Louis Cardinals on September 12, 1973, as the player-to-be-named later in a cash and player deal for reliever Wayne Granger, who had joined the Yankees the previous month.

In 1975 Crosby was in his second season with the Tulsa Oilers when the Cardinals swapped him to the Cubs for right-handed starter Eddie Solomon.

He made his major-league debut at Veterans Stadium in Philadelphia on August 5, 1975. Bill Bonham was pulled without recording an out in the first inning after surrendering three singles, two doubles, and two homers. Johnny Oates then singled off Crosby to make eight consecutive hits to start the game. The Cubs finally got an out when pitcher Dick Ruthven successfully dropped a sacrifice bunt to the first baseman. Two singles, three walks, a passed ball, and a balk later, and the Phillies were up 10-0. Crosby finally ended the inning by striking out Mike Schmidt, whose homer had chased starter Bonham.

Ruthven walked Crosby in the third and he scored on Monday’s triple. The run scored in his debut was the only one he would make in the majors.

Crosby pitched in the Chicago system in 1975 and ’76 for the Wichita (Kansas) Aeros and the Midland (Texas) Cubs. He also played winter ball in Puerto Rico.

After baseball, Crosby worked in the sporting-goods industry before starting a career as a real-estate agent in Park City, Utah.

While he managed nine hits (seven singles, two doubles) over eight minor-league seasons for an .063 average, the lanky pitcher retired with a major-league career batting average of .500 and an on-base percentage of .667.