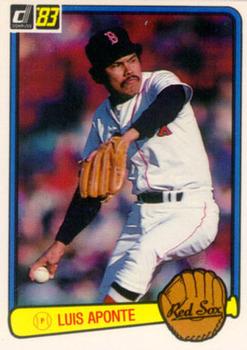 An underrated middle reliever for the mediocre Red Sox teams of the first half of the 1980s, Venezuelan righty Luis Aponte pitched for five years in the majors, the first four for Boston before a final campaign in Cleveland. He had a more storied career in winter ball in his native country.

Luis Eduardo Aponte was born on June 14, 1953 in El Tiagre, Venezuela. Information on Aponte’s parents, his siblings, and his early years has not yet surfaced. Signed as a free agent out of high school by Boston on January 12, 1973, Aponte failed to progress beyond A ball in four seasons. As a 20-year-old, he pitched for Winter Haven in 1973, then returned to Winter Haven three years later — seemingly the definition of a non-prospect. In between, he pitched for Elmira in the New York-Penn League and Winston-Salem in the Carolina League.

Likely frustrated by his failure to advance in the Sox system, Aponte “quit the Red Sox in 1977 to return to his native Venezuela.”1 He had pitched in his homeland’s winter league starting in 1973-74 for Cardenales de Lara and would hurl for that club for 17 seasons. After two years away from U.S. baseball, Aponte in 1979 pitched for Maracaibo of the Inter-American League, a new AAA outfit with teams in the Dominican Republic, Panama, Puerto Rico, the United States, and Venezuela.2 He gave up a lot of hits (70 in 44 innings) while posting a 3-5 record with a 5.32 ERA in 11 games. Nonetheless, Aponte found himself in the American League the following season.

The Chicago Cubs invited him to spring training in 1980 but did not provide a visa. “Aponte, wanting another crack at the big leagues, got in touch with scout Willie Paffen [who had originally signed the pitcher], and two days later he was back with the Red Sox.”3 He made the most of his second chance, going 9-1 with four saves in 29 games for AA Bristol (Connecticut) in 1980. He “was welcomed with open arms by pitching-short Pawtucket in late June … after the PawSox lost pitchers Win Remmerswaal and John Tudor to the majors.”4

Aponte continued to pitch well in Pawtucket, going 6-2 with nine saves in 31 games, a welcome reversal from earlier minor-league years when he earned the nickname Sunoco “because every time he entered games he threw gas on the fire.”5 Boston called him up on September 2, and he debuted with the Sox on September 4 in Seattle. Pitching the ninth with Boston down by three, Aponte retired Marc Hill and Julio Cruz on groundouts before yielding a single, steal, and walk before retiring Bruce Bochte on a fly ball to center field to complete a scoreless frame in a game the Mariners won, 7-4.

Aponte spent most of 1981 in Pawtucket, going 7-5 with a 1.94 ERA in 51 games, before Boston recalled him on September 1. As a result, he appeared in one of the most famous professional games in history, the 33-inning affair against Rochester that took place over the course of two days in April, beginning on April 18 at 6:00 PM and suspended at 4:09 AM the following morning after 32 innings, finally finished in June.

According to a reminiscence that appeared in the New York Times on the 25th anniversary of the conclusion of the marathon, “The game was amazing to a lot of people, including [Xiomara,] the wife of Luis Aponte [who pitched four scoreless innings in relief for Pawtucket, from the seventh to the tenth.] She had locked the door of their home when he returned at 5 in the morning. ‘She didn’t believe his excuse,’ [Pawtucket teammate Marty] Barrett said.”6 Xiomara and Luis had two sons together, Luixi (born in 1974) and Luis Nardo (1977).7

In a remarkable turn of events, Aponte also pitched four scoreless innings in a multiday game after his Red Sox recall when Seattle outlasted Boston, 8-7. Aponte entered the game at the beginning of the 13th inning and pitched through the 16th, yielding four hits and striking out four. The teams were deadlocked after 19 innings on September 3 before bumping up against curfew. The umpires suspended the game, which the Mariners managed to win in the 20th inning the next day. “It felt just the same to me,” said Aponte. “It was a close ball game with some good pitching. But to tell you the truth, the game at Pawtucket might have been a little tougher.”8 Julio Valdez and Rich Gedman also appeared in each of the two long encounters.

In limited duty in 1981, Aponte picked up his first major league win and save. In the offseason, Manager Ralph Houk prognosticated, “If we lose [Bill] Campbell, we have Luis Aponte for short work in the bullpen.”9 With a “herky-jerky” motion,10 Aponte had an “unorthodox delivery [that] can fool a hitter.”11 He also threw a wide variety of pitches. Longtime Sox beat writer Peter Gammons called Aponte the “Bruce Sutter of Venezuela … with a sinker, forkball, spitter, kitchen sink. [He] was the best Boston reliever the last three weeks [of 1981]. Will knock anyone down. ‘He’ll be one of the biggest surprises in the league,’ said … Houk, who loves him.”12

Aponte had his best season in the majors in 1982, going 2-2 with a 3.18 ERA and three saves over 40 appearances. He had by far the longest outing of his career against Seattle that season. With Boston already trailing, 4-0, in the top of the third, Aponte came on with two on and none out. He got out of the jam and ended up throwing seven innings of shutout ball, during which he gave up only two hits and one walk while striking out four. The Sox lost, 4-3.

Boston rewarded Aponte with a $75,000 contract for 1983,13 but he proved less effective with a 5-4 record, three saves, and a 3.63 ERA in 34 games. After the season, he reportedly had to skip winter ball because of an elbow injury.14 Nevertheless, he managed to appear in seven games, a far lighter workload than he usually assumed in Venezuela. He never pitched for Boston again, going to Cleveland in a trade for two righty pitchers, Paul Perry and Michael Poindexter, who never reached the majors. For some reason, the deal took more than two weeks to consummate, according to the Red Sox brass.15

Aponte got off to an excellent start with the Tribe and showed unusual effectiveness against lefty hitters. “I had trouble with lefthanders before because I could not always control my forkball,” he said. “Now I have learned to throw it where I want.”16 As June ended, Aponte had a 3.40 ERA with one win over 22 games. In the first six days of July, however, he yielded runs in three straight games, and his ERA soared to 4.11. Needing a roster spot for Joe Carter, Cleveland understandably sent Aponte to the Maine Guides of the International League. Rather than accepting the demotion, Aponte denounced his skipper. “I don’t like going to the minors,” he said, “but the worst thing that ever happened to me was playing for Pat Corrales. I hope I never have to play for him again.”17

Aponte got his wish but also never pitched in the majors again. After his sojourn in Maine, where he went 1-1 with two saves and an ERA of 3.07 in 10 games, Aponte took the winter of 1984-85 off, the first Venezuelan season he had skipped since turning pro. He then spent the next two summers in the Mexican League. In 1985, he pitched for the Mexico City Reds, going 1-1 with a 2.77 ERA in 11 relief outings. In 1986, he hurled in five games out of the bullpen for Córdoba, again posting a 1-1 record, but with a 3.68 ERA.

That was Aponte’s final season in summer ball, but hardly the end of a long career that saw him pitch for Lara in two separate stints for a combined 17 winter-league seasons. His first 11 campaigns with Lara had featured one in 1980-81, when he went 3-1 with 12 saves and a 1.20 ERA. During six more winters in Lara, he had another three seasons with sub-2.00 ERAs, notably 1985-86, when he did not allow an earned run over 38.1 innings during which he had a 4-1 record with eight saves. His stellar performance won him Comeback Player of the Year honors.18 Seemingly done in Venezuela after the 1990-91 winter, Aponte returned in 1996-97 at the age of 43. With Caribes de Anzoátegui, he pitched in nine games with a 1-1 record and 3.75 ERA in 12 innings. Over 18 seasons in Venezuelan ball, Aponte pitched in 373 games, all except 14 in relief. He went 54-39 with a sharp 2.98 ERA and 73 saves,19 pitched in the playoffs in 11 seasons and won a championship in his last season with Lara in 1990-91.

Cleveland had fired Corrales in 1987, and by 1988 Aponte had begun scouting for the Tribe in Venezuela.20 He tipped Cleveland to a fellow Venezuelan, “a shortstop with a titanium plate and six screws in his right elbow. Aponte said the shortstop was trying to make it as a pitcher after missing the 2002 season because of his elbow operation.”21 That shortstop, Rafael Betancourt, pitched in 371 games for Cleveland from 2003-09.

With Venezuela in economic, political, and social turmoil, Aponte ended up fleeing his home country to teach baseball in Chile “because of insecurity … of not knowing what I would eat the next day and because of the insecurity of not knowing if I would not go out from my house and would return.”22

Few tended to notice middle relievers in the 1980s, and Luis Aponte attracted little attention during his American League career. Sabermetric data unavailable in Aponte’s day spotlight his below-the-radar effectiveness. In WAR, Aponte ranked ninth for Boston in 1981 (Dennis Eckersley ranked 12th), 10th in 1982 (Carl Yastrzemski ranked 11th), and 10th in 1983 (Jerry Remy ranked 12th). Anyone can cherry-pick seasons where an obscure player outperformed a more notable one, but Aponte stacked up even more impressively against the all-time universe of Red Sox relief pitchers. Of all the Boston relievers who threw 150 innings or more, Aponte, after his last game for the Sox, had an ERA+ bettered by only Tom Burgmeier and Dick Radatz, outperforming far more famous hurlers like Mace Brown, Ellis Kinder, and Sparky Lyle.23

Although he toiled in obscurity as a big-leaguer, Luis Aponte had a strong run in Boston before a brief one in Cleveland. In his homeland, he earned the highest honors a player could hope to attain when the Venezuelan Baseball Hall of Fame inducted him in 2010 as part of a six-member class that also included Andres Galarraga.

In addition to the sources shown in the Notes, the author used Baseball-Reference.com and:

6 Ira Berkow, “33 Innings, 882 Pitches and One Crazy Game,” The New York Times, June 24, 2006. She may not have believed his excuse because Aponte had an imaginative sense of humor. According to longtime Boston announcer Joe Castiglione, “Ken Coleman and Ned Martin took [Aponte] out to a fancy dinner in New York. And [Aponte] said, ‘I want to reciprocate’ or words to that effect…. They treated Aponte to this great dinner in New York, and Luis said, ‘I own a restaurant and I’d like you to be my guests … the next time you’re in Venezuela.’ They didn’t take him up on the offer.” Joe Castiglione, WEEI Red Sox radio broadcast, August 31, 2020.

22 Mariana Moreno, “Luis Aponte Teaches Baseball in Chile to Feel Closer to Venezuela,” El Nacional, March 22, 2019. Aponte said he would go back to Venezuela if conditions improved there: “I would return to my country to rebuild what they have destroyed, which is a lot.”