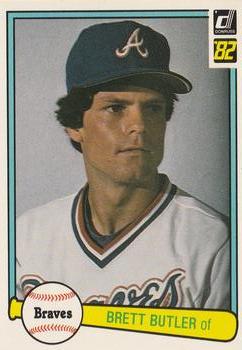 Heading into the 1982 season, fans of the Atlanta Braves had reason to believe the team might have turned a corner. They had endured losing seasons in six of the past seven years, and had just finished with a 50-56 record in the strike-shortened 1981 season. But the team had a young core built around Dale Murphy and Bob Horner, with Brett Butler close behind. The supporting cast of veterans included Chris Chambliss and Claudell Washington, and longtime Braves fixture Phil Niekro was still going strong at the age of 43. Joe Torre had been hired in the offseason to take over managing duties, replacing Bobby Cox. Torre had not had much success managing the Mets for the past six years, but Braves owner Ted Turner felt he was just the man to lead the Braves out of a rebuilding stage and into contention in the NL West division.

Atlanta kicked off the 1982 season on April 6, starting with a two-game series against San Diego. The Braves swept the Padres in San Diego, then came home and swept their opening three-game homestand against Houston. After another three-game sweep over Cincinnati, the Braves started evoking memories of the Oakland A’s from the previous year, who had just set a new modern-day record by winning 11 games in a row to start the season. The all-time record of 12 wins to start a season still belonged to the 1884 New York Giants. The Braves traveled to Houston and won three games in a row, then came back home for another three-game series with the Reds beginning on April 20. In the first game of the series, the Braves were outhit by the Reds and gave up twice as many walks, but Atlanta bunched its hits together at the right time and came out on top with a 4-2 victory, and in the process set a new modern-day record with 12 wins in a row to start a season. The Athletics’ record had stood for only one year.

By April 21, prognosticators were already speaking of a possible return to the playoffs for the Braves, and the city of Atlanta had gone into a frenzy over “the streak.” Atlanta-Fulton County Stadium was seeing crowds it hadn’t seen since the team’s last postseason run, in 1969. Thousands of fans showed up at the Atlanta airport to welcome the Braves back from their recent road trip. An Atlanta-based version of Terry Cashman’s baseball anthem “Talkin’ Baseball” called “Talking Baseball with the Braves” was getting a lot of airplay on Atlanta radio stations and was a top seller in local record stores. Former President and faithful Braves fan Jimmy Carter even said he had to take a break from writing his new book so he could tune into games during the evening.1

More than 22,000 fans arrived at the ballpark that evening, and they were greeted with a placard on their seats that proclaimed “I Was There … 13” to commemorate the event. The Braves sent Rick Mahler to the mound to face off against Reds starter Mario Soto, with the game set to start at 7:40 P.M. Mahler was already going for his third win of the year, Soto was looking for his first victory after suffering two losses.

The first two innings were uneventful, with neither team moving a runner past second base, but Cincinnati got to Mahler on its second turn through the lineup. In the top of the third inning, Ron Oester stroked a two-out single to right field, and Dave Concepcion followed with a walk. Larry Biittner normally was used in a pinch-hitting role since coming over from the Cubs after the 1980 season, but he started in right field this evening, and in his second at-bat he delivered a three-run home run to right field to put the Reds on top.

Soto had little trouble handling Atlanta’s batters through 6⅓ innings, which was good for him because the Reds offense managed only three baserunners after the third inning. But other than the Reds’ scoring outburst in the third, Braves hurlers also pitched well. Mahler set down the Reds in order over the next two innings, and relievers Preston Hanna and Rick Camp closed down the Reds offense for the rest of the game. Soto gave up one run in the fifth inning when Chambliss started things off with his third home run of the year. Then in the seventh inning, Murphy led off with a double and took third on a fly ball by Bruce Benedict. After Chambliss walked, veteran reliever Tom Hume replaced Soto. Hume gave up a sacrifice fly to Rafael Ramirez to score Murphy, but retired pinch-hitter Ken Smith to end the inning.

The score stood at 3-2 going into the ninth inning. The Braves had threatened in the eighth against Hume, but Bob Shirley was brought in and caught Chambliss looking for a strikeout with the bases loaded for the third out. The Reds could not pad their lead any more in the ninth, and after getting the only hit of the top half of the inning, Shirley came out again to face the Braves for the bottom half of the frame. Atlanta was down by one run and was three outs away from a possible finish to its winning streak, meaning it would have to settle for sharing the record with the 1884 Giants. Reserve catcher Matt Sinatro, making his first appearance of the season, led off the inning with a walk, and Ramirez followed with a bunt single. Pinch-hitter Rufino Linares flied out to center field for the first out of the inning, but the hopes of Braves fans started to rise as Atlanta came back around to the top of its lineup. Leadoff hitter Butler hit a slow-rolling groundball toward Concepcion at shortstop. Sinatro took what appeared to be a slight pause, then as he ran toward third base he was nicked by the ball on his spikes. The ball careened past Concepcion, and Sinatro was declared out for interference. This was the second out of the inning for the Braves, but it also prevented a possible game-ending double play. There had been some grumbling at the umpires after the play that the interference might have been intentional, but the Reds didn’t argue the call. Reds manager John McNamara even acknowledged later that Sinatro probably wasn’t seasoned enough to plan the play that way. Even if the ball had gone through, the speedy Butler might have beat the throw to first.

With the Braves now in scoring position, Jim Kern relieved Shirley. Kern promptly threw a wild pitch to advance Ramirez and Butler to second and third. Atlanta Braves legend Biff Pocoroba was at bat as a pinch-hitter, and he was intentionally walked to load the bases and give the Reds a better chance of a force out. Joe Price replaced Kern on the mound and was tasked with trying to retire Claudell Washington. This was possibly a strategic mental move by McNamara, since just a week earlier Washington had been hospitalized after Price struck him in the head with a pitch. But Washington came into the batter’s box unfazed by the rematch and looking to swing the bat, and he hit Price’s second pitch back up the middle past the pitcher. Ramirez scored easily, and Butler flew around third and slid in ahead of the throw from center field to score the winning run. Braves players emptied the dugout and swarmed Washington in celebration.

Earlier in the game, manager Torre had noted to pitching coach Bob Gibson that out of the team’s previous 12 wins, none had come in the ninth inning. The Braves couldn’t have picked a better game for their first walk-off win of the year. After the game Sinatro and Torre were asked by reporters about Sinatro’s running “gaffe” that won the game. Sinatro just smiled at the question, but Torre replied, “We don’t teach that kind of baseball.”2 Rick Camp picked up the win, Bob Shirley was charged with the loss. The game lasted 2 hours and 44 minutes. The Braves lost to Cincinnati the next night, ending the record-setting streak at 13 games. After topping a record that had stood for nearly 100 years, the Atlanta Braves enjoyed sole ownership of the record for only five seasons: The 1987 Milwaukee Brewers also began their season with a 13-game win streak.

I attended this game with my dad when I was 7. I do not have distinct memories of the game action, but I do remember arriving to my seat and seeing the “I Was There … 13” placard placed there waiting for me. Nearly 40 years later I still have the placard, framed and hanging on the wall of my basement.

The author used the web sites baseball-reference.com, paperofrecord.com, and newspapers.com for researching this game.