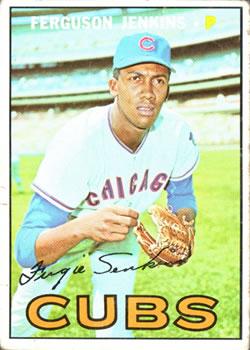 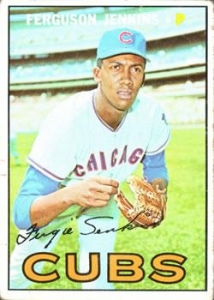 It felt like the middle of football season rather than springtime.

Ferguson Jenkins braved weather that would have pleased Jack Frost to notch 10 strikeouts in a complete-game 7-3 victory over the Pirates at Wrigley Field. When Jenkins—who was 1-0 with a 2.35 ERA—threw his first pitch, it was 37 degrees. The temperature got as low as 32.1

A native of Canada, Jenkins had a constitution that could withstand cold temperatures. It may have been a highly significant factor in the victory. But Jenkins also had a secret weapon—a hot water bottle. It seemed like a good idea at the time. But the strategy proved ineffective, forcing Jenkins to use an old-fashioned approach. “It made my hand sweat and it got cold when I started pitching,” revealed the right-hander. “So after the fourth inning, I just put on a glove to keep warm. This was picnic weather back home.”2

Juan Pizarro had one win and no losses so far. His Puerto Rico background was not suited for the weather, though he had some experience in Midwestern climates playing for the Braves and the White Sox since 1957. He came to Pittsburgh as the player to be named later in an offseason trade that sent Wilbur Wood to Chicago the previous autumn.

Ironically, the game had been scheduled for the day before but was postponed because of concerns about the weather being in the 30s.3

For the hometown fans among the 6,754 ignoring the thermometer, the outcome was a joyous occasion worth a few shivers. But the game began with sequences that had their hearts beating so loud that they could have been mistaken for the percussion section of the Chicago Symphony Orchestra.

Chicago had been playing .500 ball with a 4-4 record and fifth place in the standings; Pittsburgh was 3-4 in seventh place.

Pirates center fielder Matty Alou led off the game with a single and Maury Wills responded in kind, putting runners on first and second.4 Catcher Randy Hundley fired to Ron Santo at third base and nailed Alou on a steal attempt; Wills took second base and moved to third on Jenkins’ wild pitch.

The drama continued when Roberto Clemente’s fielder’s-choice grounder led to the second out—Jenkins threw to Hundley, who relayed to Santo. It retired Wills, whom the Pirates had obtained from the Los Angeles Dodgers in a December 1966 trade, but Clemente got to second base on the play. Jenkins then walked Willie Stargell, furthering a Pittsburgh threat with Donn Clendenon coming to the plate.

To the delight of Chicago’s North Side, the 24-year-old Jenkins struck out Clendenon.

Pittsburgh chipped away at Jenkins’ pitch selection in the second inning and scored the first run of the game. Chicago’s right-hander faced runners on second and third with no outs after Bill Mazeroski singled and Gene Alley doubled.

The next two batters kept Cubs left fielder Billy Williams busy. Jim Pagliaroni’s fly ball was not deep enough for Mazeroski to score, but Pizzaro’s single drove him in, giving Pittsburgh a 1-0 lead. Alley also tried to score on the play, but Williams’s throw to Hundley was in time for the tag. Alou was caught looking for the third out.

Clendenon raised the score to 2-0 with a leadoff homer in the top of the fourth.

Pizarro, who had pitched only two innings for a 0.00 ERA so far in 1967, threw solidly for Pittsburgh throughout the first three innings—no hits, no walks. But the home squad pounded the southpaw—who had joined the Pirates in an offseason trade with the Chicago White Sox—in the bottom of the fourth.

Don Kessinger drew a walk to begin Chicago’s offensive spark. It looked like a potential double-play ball when Clendenon fielded Glenn Beckert’s grounder at first base. But his throw to Mazeroski went in the dirt and both runners were safe.

Williams hit a single to score Kessinger and move Beckert to third base; Pizarro loaded the bases by walking Santo. Rookie right fielder Norm Gigon, starting his first major-league game after two pinch-hit appearances, fanned for the first out; Hundley’s sacrifice fly scored Beckert and evened the score, 2-2. Williams and Santo stayed at their bases on the fly ball then moved ahead 90 feet when Ernie Banks received an intentional walk.

Adolfo Phillips singled to give the Cubs a 4-2 lead with Williams and Santo both crossing home plate. Jenkins whiffed against his pitching counterpart for the third out.

In the top of the fifth, Cubs shortstop Kessinger handled Pizarro’s grounder and snared Alou’s pop fly; Wills’s fly out to Williams in left gave Jenkins his first three-up, three-down experience in the game.

Cubs fans rejoiced in the cold when their team added three runs to the Wrigley Field scoreboard in the bottom of the fifth. What made the scoring special was its unlikely source. Facing two outs with Beckert and Santo on base—a double and a walk, respectively—Gigon crushed a pitch into the bleachers on an 0-and-2 count, giving the Cubs a 7-2 lead.

The 1967 season was Gigon’s only year as a major leaguer; his home run against Pizzaro was his only career round-tripper and first major-league hit. Gigon had a journeyman-type career in the minors, playing in the Florida State League, Eastern League, Southern Association, International League, Pacific Coast League, Arizona Instructional League, and Texas League.

In 34 games and 77 plate appearances, Gigon batted .171. After the game, he disclosed, “I gave all my equipment away except a glove two years ago. I felt I wasn’t getting a chance to make the majors and I didn’t want to spend my career in the minors.”5

Steve Blass replaced Pizarro; Hundley’s groundball to Wills at third base was the third out.

Clemente gave the Pirates a moment of hope with a leadoff homer in the top of the sixth. But it was the final run for the visitors.6

Jenkins’s seventh-inning performance was another three-up, three-down scenario. This one showcased his skill: Alley, Pagliaroni, and George Spriggs—pinch-hitting for Blass—struck out.

Pirates manager Harry Walker sent Jim Shellenback in relief to begin the bottom of the seventh, but his tenure lasted about as long as it took to eat a couple of slices of Chicago deep-style pizza. After Kessinger and Beckert led off with walks, Walker called the bullpen for Bill Short, but the lefty’s time on the mound lasted only one batter; Williams’s sacrifice put runners on second and third.

Tommie Sisk relieved Short and gave Santo an intentional pass. Gigon whiffed; Hundley grounded out to Alley, who flipped to Mazeroski for the force out of Santo.

Jenkins cruised after Clemente’s sixth-inning blast; Pittsburgh managed one hit for the rest of the game. Chicago’s iconic pitcher gave up nine hits during the afternoon but only one walk. In the top of the ninth, amid “snowflakes [that] were gently falling,”7 he retired three batters in a row, including Clendenon for the 10th strikeout in his portfolio of excellence. He ended the season with 236 strikeouts, giving him second place in the NL behind Philadelphia’s Jim Bunning, who had 253.8

The righty’s outing prompted Chicago Tribune writer Edward Prell to predict “that he may be one of the Cubs’ great ones.”9 Prell’s forecast was accurate: Jenkins won 284 games, struck out 3,192 batters, and was inducted into the Baseball Hall of Fame in 1991. The Canadian Baseball Hall of Fame had given him the honor four years before Cooperstown did.

Jenkins had been on the Phillies roster in ’65, playing seven games. Mostly in relief for the Cubs in ’66, he started 12 games but had a total of 61 under his belt. 1967 was Jenkins’s first full season: He had a 20-13 won-lost record, led the major leagues in complete games, and finished second in the NL Cy Young Award voting.

In 1974 Jenkins went to the Rangers and played there for two seasons. He had a two-year stay in Boston, then returned to Texas. He donned a Rangers uniform from 1978 to 1981 and rejoined the Cubs his final two seasons.

1 Charley Feeney, “Mercury in 30s as Jenkins Gives Buccos a Chill,” Pittsburgh Post-Gazette, April 24, 1967: 30. According to Baseball Reference, the temperature was 40 degrees when the game began.

4 Alou was the 1966 NL leader in batting average with .342. His brother Felipe trailed in second place with .327 for the Atlanta Braves.

6 Clemente had won the 1966 National League Most Valuable Player Award.

8 Jenkins placed 10th in the Strikeouts per 9 Innings Pitched category.