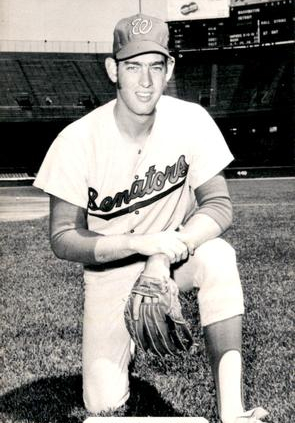 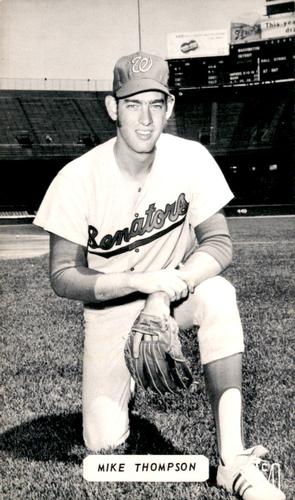 On Saturday, August 14, 1971, a battle of the two fifth-place clubs in the American League, the Washington Senators and the California Angels, was a sidebar in that day’s baseball news. The lead story in the next day’s Washington Post sports section reported that at Three Rivers Stadium in Pittsburgh in front of nearly 31,000 fans, the St. Louis Cardinals’ Bob Gibson pitched a no-hitter against the eventual 1971 World Series champion Pirates.

In Washington on a warm evening, only 4,011 fans showed up at RFK Stadium, reflecting the capital region’s waning enthusiasm for a franchise that would abandon it barely a month later.1 For a young member of the Senators pitching staff, the game that night provided a career milestone just as singular, in its own way, as Gibson’s only career no-hitter.

The Senators’ starting pitcher was 21-year-old rookie Mike Thompson, one of a few hard-throwing young hurlers on the 1971 squad helmed by Ted Williams. Thompson had started the season at Triple-A Denver but had spent most of the season with the big-league squad. August 14 was his eighth start and his ninth appearance of the year. In his game story the next day, Washington Post Senators beat writer George Minot referred to Thompson as a “stylish righthander who had only been given three runs in his previous seven starts and had lost four of them.”2

The first batter of the game, second baseman Sandy Alomar, singled, but the Angels couldn’t manage any further offense in the opening frame. In the second, former Senators third baseman Ken McMullen walked, and in the third, center fielder Mickey Rivers hit a two-out single. There were no early scoring threats from the Angels, but the Senators were going just as quietly; one-two-three in the first and third innings, while outfielder Dick Billings hit a one-out bloop double in the bottom of the second which Minot observed “the right fielder couldn’t hold.”3

The Angels’ first real opportunity to score came in the top of the fourth. Shortstop Jim Fregosi singled to lead off the inning. A one-out single by McMullen sent Fregosi to third base. But Thompson struck out right fielder Roger Repoz and got the eighth batter in the lineup, catcher John Stephenson, to foul out behind third base, squelching the threat.

Thompson retired the Angels one-two-three in the fifth and sixth innings, but the Senators still weren’t doing anything with the bat. At the end of six, the home squad had only Billings’ hit and a walk by slugging first baseman Frank Howard to show for its efforts.

McMullen, the Angels’ home-run and RBI leader, who had spent 1965-70 toiling for Washington, started the top of the seventh with a single, but Thompson retired California’s 7-8-9 hitters. After the seventh-inning stretch, Frank Howard reached base on an error by Angels shortstop Fregosi. The next batter was left fielder Jeff Burroughs, then a highly-touted 20-year-old prospect who was seeing his first extended play in the majors. Burroughs hit a home run off the facing of the upper deck in left-center field. The ball bounced back toward the field of play, where Rivers caught it on the fly and flipped it in disgust into the upper deck.4 It was the second home run of Burroughs’ career, during which he accumulated 240 homers. The Senators held a 2-0 lead.

In the top of the eighth, things started to get really interesting for “the tiring Thompson.”5 With one out, Rivers walked and left fielder Tony Gonzalez reached on an error by second baseman Lenny Randle. Fregosi hit into a force play with Rivers reaching third. Thompson walked Angels first baseman Jim Spencer to load the bases. However, McMullen (who up to this point was 2-for-2 with a walk) lined out to center to end the threat. In the bottom of the frame, Washington got runners on first and third on hits by Randle and Burroughs, knocking the Angels starter, Clyde Wright, out of the game, but didn’t score.

Thompson took the mound in the top of the ninth needing three outs for his first win and the complete game. Washington made defensive replacements – subbing Tom McCraw for Howard at first, shifting Billings from right field to left, and putting Del Unser in for Burroughs in right. The Angels’ Repoz led off with a single. Thompson retired Stephenson on a fly ball, but hit Tommie Reynolds, pinch-hitting for reliever Lloyd Allen. Bruce Christenson entered the game as a pinch-runner for Reynolds. Then, according to the Post, “[Second baseman] Len Randle started what appeared to be a game-ending double play, but first base umpire Hank Soar ruled the flying Sandy Alomar safe at first.” With runners on first and third, “Thompson jumped ahead of Mickey Rivers with two strikes, then walked him loading the bases, and Williams came out himself to call a reliefman. The crowd of 4,011 stood in acclaim for the 21-year-old Thompson as he walked to the dugout.”6

Reliever Paul Lindblad (who had come to the Senators from the Oakland Athletics in an early May trade) got pinch-hitter Billy Cowan to pop out to shortstop Tim Cullen behind third base to complete the 2-0 victory for the home squad. It was Lindblad’s eighth save of the season.

Thompson earned his first win of the year and of his career. His ERA descended to 3.68 and his overall record was now 1-4. At 21, his baseball future appeared bright. Two months earlier, Senators pitching coach Sid Hudson had called Thompson “the best young arm in our organization.”7 What no one at RFK that night had any reason to suspect was that this would be the only victory of Thompson’s career. The next season the club (by then the Texas Rangers) had him pitch the entire season at Triple-A Denver. In 1973 he was traded to the Cardinals, in 1974 to the Atlanta Braves, and in 1976 to the Cincinnati Reds. He spent the 1976 season in the minors. On November 7, 1976, Thompson was sent back to the Texas Rangers, but never played in Organized Baseball after that. He started a total of 29 major-league games and completed his major-league career in 1975 with a record of 1-15 and an earned-run average of 4.86.

This article was fact-checked by Carl Riechers and copy-edited by Len Levin.

Thanks to the Reference Services team at the National Baseball Hall of Fame and Museum for sending their file on Thompson’s career.